Vladimir Putin ‘most likely’ to permanently cut off Europe’s gas 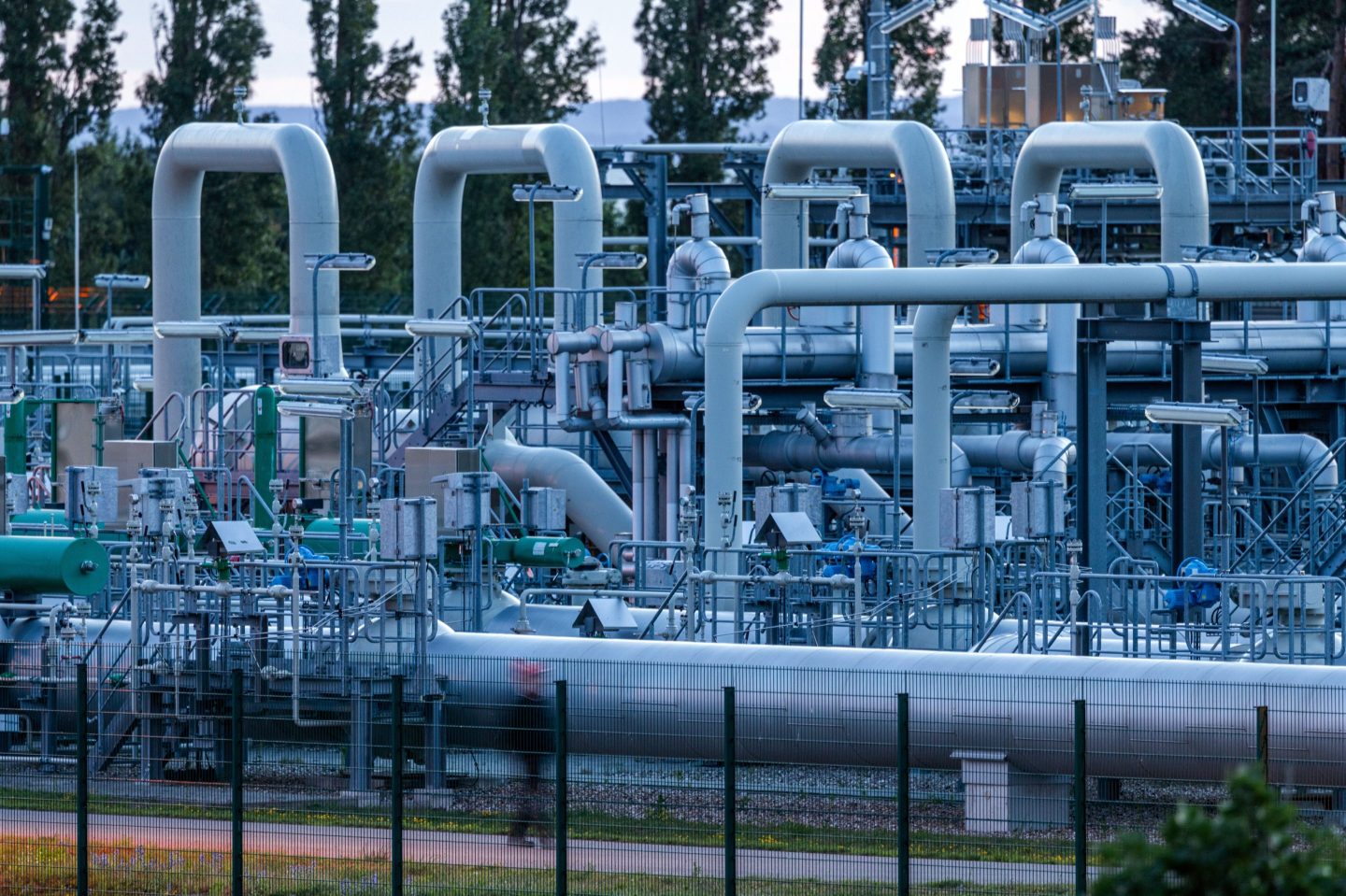 Routine maintenance work is underway on the Nord Stream 1 pipeline running from Russia to Germany—but Europe fears that Russia has no intention of turning is back on when maintenance is finished.
Photo by Jens Büttner—picture alliance/Getty Images

The biggest pipeline flowing gas from Russia to Germany started annual maintenance on Monday with Russia curbing flows to the bloc for 10 days.

While this would normally be routine practice, in a time of war, many governments and analysts are bracing for Russia to cut off the gas permanently.

Maintenance on the Nord Stream 1 pipeline, which is already running at a 40% capacity due to previous cuts made by Russia, normally transports 55 billion cubic meters of gas each year.

Russia previously cut the capacity claiming it was missing a key gas compressor unit for its turbine which was stuck abroad due to sanctions imposed by Canada.

While Russia promises to have the pipeline back up and running by Jul. 21, Germany and France are wary.

German Economy Minister Robert Habeck warned the country on Saturday, it should face the possibility that Russia will stop all gas flows through Nord Stream 1 after the scheduled maintenance period ends.

“Everything is possible, everything can happen,” Habeck told Deutschlandfunk radio on Saturday. “It could be that the gas flows again, maybe more than before. It can also be the case that nothing comes.”

This comes after previous comments made by Habeck at the end of June, where he said: “Based on the pattern we’ve seen, it would not be very surprising now if some small, technical detail is found and then they could say ‘now we can’t turn it on anymore.”

Habeck calls Russia turning off Nord Stream 1 a “nightmare scenario,” which Germans must prepare for, but France’s Finance Minister Bruno Le Maire called it something far more terrifying: “the most likely scenario today.”

“Let’s prepare ourselves for a total cut-off of Russian gas,” Le Maire said at an economic conference in Aix-en-Provence, southern France, on Sunday.

The Kremlin last Friday said it would increase gas supplies to Europe if a turbine for the Nord Stream 1 pipeline currently being serviced in Canada was returned. Canada reluctantly agreed, issuing a “time-limited and revocable permit” to exempt the return of turbines from its Russian sanctions, while also adding more sanctions to Russia’s energy sector.

At the time of the announcement, Kremlin spokesperson Dmitry Peskov dismissed all claims that Russia was using oil and gas to exert political pressure. He told Reuters the maintenance shutdown was a regular, scheduled event, and that no one was “inventing” any repairs.

But Russia has been weaning Europe off its gas supplies since the EU first placed sanctions on Russia’s energy sector—sending the price of gas skyrocketing at a time when many European countries need to fill their storage ahead of the winter season.

Pipelines running from Russia to Europe have seen their flows gradually decline, Bloomberg reports, and Ukraine halted one gas transit route in May, blaming interference by occupying Russian forces.

Russia has also cut gas supplies off to Poland, Bulgaria, Finland, and others after they refused to comply with Russia’s demand for payment in roubles.

Wholesale Dutch gas prices, the European benchmark for gas, have risen 400% since last July, with the European Union holding an emergency meeting on Jul. 26 to look for other sources of energy.

What would happen if Russia cuts off gas to Europe?

If Russia cuts off gas to Europe completely, countries could start running out of energy and face dangerous consequences.

“If Nord Stream gets cut off, or if Germany loses all its Russian imports, then the effect will be felt on the whole of north-western Europe,” Dutch energy minister Rob Jetten told Reuters.

Germany is already rationing its hot water, dimming its street lights, and is considering limiting the shower times of its people, the Financial Times reported, as it looks at more ways to reduce its gas usage.

And if Putin’s previous behavior is any indication, a total cut-off is likely.