Democrats need to move past ‘failure to launch’ on the economy 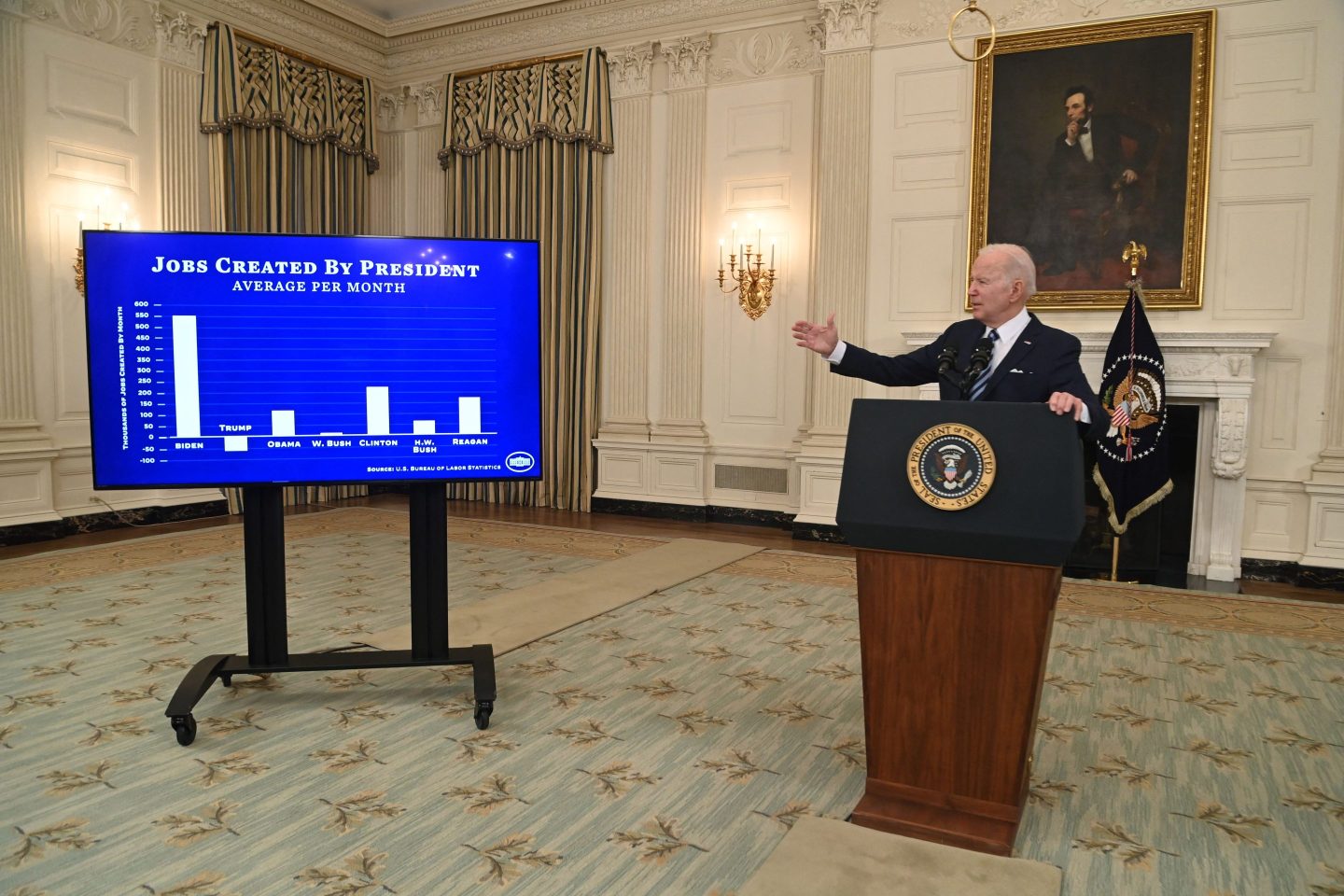 U.S. President Joe Biden speaks about the January jobs report from the While House on Feb. 4. Recent polls show the positive economic message is not reaching voters.
Saul Loeb—AFP/Getty Images

We’ve all heard the story about the tree that falls in the woods when no one sees it. Does it make a sound? The question for Democrats today is if the economy is recovering but no one ever talks about it, does it make an impact? Will anyone notice?

That’s what’s happening with the Biden administration and Democrats today. There’s a story to tell about the economic recovery over the last 14 months, but so far no one is hearing it.

People are feeling the very real pressures of rising prices and inflation, but the same attention isn’t being given to the full economic story of where we were–and where we are now.

Like any good story, it has a powerful narrative arc. It starts when the Biden administration was inaugurated, with job growth at its worst point since President Hoover on the eve of the Great Depression. It shows our hero—the American working people—overcoming all obstacles to succeed.

Today, the economy is back up off the mat: Working people can get a job again. More than six million jobs were created last year, the largest number on record. People are earning more for their work.

Last year, the US economy (GDP) grew at 5.7%, the highest rate in almost 40 years. Our recovery is leading the world. For the first time in 20 years, the U.S. economy has been growing faster than China’s.

The problem is that 34% of people think more jobs were lost than created in the last year, while only 32% think more were created, according to the latest Navigator Research survey. Lest anyone think these numbers are driven by Republicans who won’t give credit to a Democratic administration, only 44% of Democrats and 22% of independents correctly think that more jobs were created in the last year.

Similarly, on economic growth, 56% of Americans believe that our economy has grown more slowly than usual over the last year, according to a YouGov survey. A plurality of Democrats (32%) and a majority of independents (62%) share that view.

The key to an effective message is repetition. A relentless focus on telling the story of our successful economic rebound can break through to those who are willing to listen.

This isn’t just a series of isolated facts, but rather a story of America and Americans making a comeback. Like all good stories, it’s better when we show it rather than tell it. We have to show up in every community and show the story of what this recovery means to real people. And we can’t do it just once; the key to an effective message is repetition. (See what I did there?)

When people hear the recent economic record, they can change their opinions. Research from Navigator showed that simply sharing these economic facts with people moves their perception of the state of the economy from -44 (26–71%) to -10 (44–54%), a 34-point shift.

That shift is even more pronounced among Democrats, who shifted nearly 50 points in their perception of the economy after learning the facts. People want to hear this story and they respond when they do.

There are two key reasons why it’s so important that Democrats tell it. First, our standing on the economy is weak, with President Biden underwater by 14 points (38–62%) on the economy in the latest CBS survey. That leaves voters uncertain which party they should trust on key issues like job creation, rebuilding the economy, and economic growth.

Second, Democrats are in control of both the White House and Congress. That means the public will hold Democrats responsible for the direction of the country, and right now people believe the country is headed on the “wrong track.” Democrats can accept that or can make the case that the track the country is on has changed.

Going into the 2010 midterms, Democrats didn’t have this story to tell about the economy. The unemployment rate was 9.4% but, today, it’s 3.8%.

None of this is easy, and it must be done strategically. The way Democrats tell the story of the economy must be calibrated to reflect the reality of the situation, the very real concerns about inflation, and the mood of the country.

People are in economic pain, we should tell them the story of the recovery that’s underway and then lay out our plan to lower costs.

If Donald Trump was President right now, he’d have cheerleaders at all his events shouting, “Give me a G, give me a D, give me a P!” While people would hear the story of the economy from him, it would likely come across as disconnected from people’s lives. That’s not the right answer.

The message can’t be “mission accomplished” on the economy; we’re not there yet. But it’s past time for Democrats to move beyond “failure to launch.”

At the end of the iconic 1980s film Trading Places, Mortimer Duke looks over at his stockbroker and implores him to get back in there and “Sell, sell, sell.” In their case, they wanted to sell but they had nothing anyone wanted to buy. For Democrats, today, there is something to sell but not enough of us are pushing to “Sell, sell, sell” it.

If we don’t, we may wake up after the midterms wondering why people didn’t hear our story, never realizing that we failed to share it with anyone. The economic recovery is making a noise–it’s up to us to make sure people hear it.

Jesse Ferguson is a Democratic strategist, advising various issue and independent expenditure campaigns. He is a former director of the Democratic Congressional Campaign Committee IE and former spokesperson for Hillary Clinton for President.