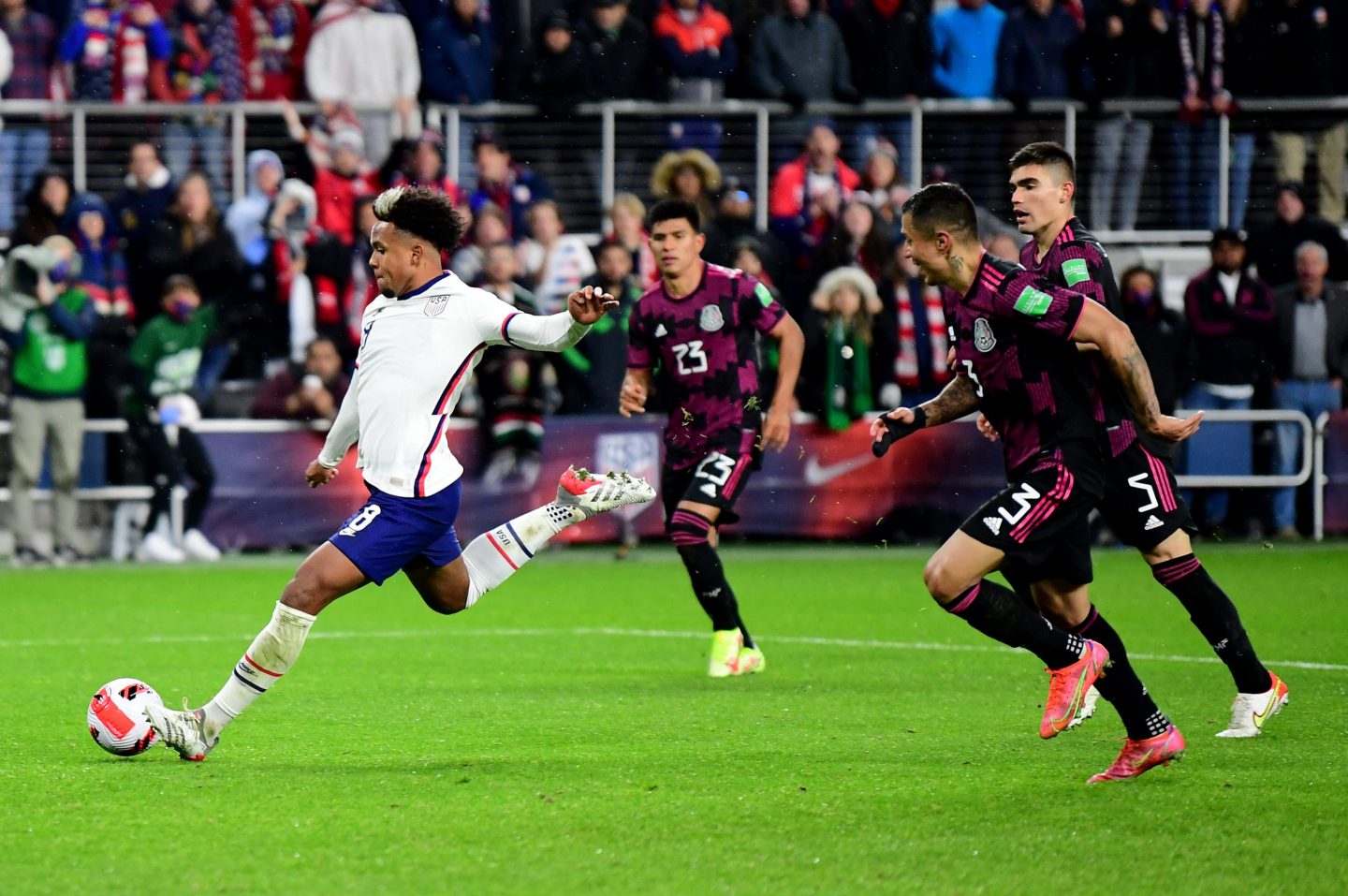 U.S. #8 Weston McKennie shoots and scores a goal during the second half of a FIFA World Cup qualifier against Mexico at TQL Stadium on Nov. 12, 2021, in Cincinnati, Ohio.
Emilee Chinn—Getty Images

The long odds Black Americans face in climbing the economic ladder aren’t due to a glitch or some inadvertent bug that we’ve overlooked. It’s a feature of the everyday systems that deny generational opportunity to people of color by refusing equitable access to capital.

This month, Major League Soccer became the first professional sports league to transact a major commercial deal with all-Black banks. It followed a similar partnership between the Atlanta Hawks last year, but many more deals are needed to balance the staggering credit access gap.

Fair access to credit for a first-time home or small business loan is the difference between dying in debt or leaving an inheritance to your children, no matter your race. That’s why uplifting community Black banks, which break the continuum of poverty by underwriting the American dream, is our collective anti-racist responsibility.

Credit is like clean water—communities can only grow where it flows. But that faucet rusted shut decades ago for too many Black and brown communities. After decades of benefiting from Black bodies and Black talent, professional sports can and should help open that spigot.

In 2019, the last year for which data is available, the median wealth of a white family in America topped $189,000. Meanwhile, the average Black family had a net worth of just over $24,000. That 13-to-one gap stems from both the legacy of slavery and segregation, which saw the plundering of Black labor and riches, and the persistent, present-day financial services structures that systemically exclude people of color.

In majority-white communities, there are 41 financial institutions for every 100,000 people. That number falls to just 27 for neighborhoods with a non-white majority. Instead, costly and predatory alternative financial services like payday loans and check-cashing flourish. This concentration of banking services in wealthier, whiter communities helps explain how roughly half of all Black families are unbanked or underbanked compared to just 15% of white households.

For most families, wealth is transmitted intergenerationally through home equity. Homeownership rates for Black Americans have hardly budged in 50 years.

According to a recent study by the real estate analytics firm Zillow, major commercial banks rejected Black mortgage applicants 84% more often than white applicants. At the same time, more than half of all small business loan applications by Black borrowers are denied, roughly double the rate for white applicants.

Community-focused Black banks help to end the cycle of financial exclusion of Black and brown people by practicing a system of lending that tolerates higher risk. Their physical proximity to underserved communities provides financial literacy and wealth-building programs to consumers who need them most. Like the communities they serve, many Black banks are chronically and acutely starved for capital, which restricts their lending capacity.

To protect against insolvency, federal regulators closely monitor banks’ financial health, including their equity and retained earnings relative to the credit they extend. This tier-one capital measure has put a hard ceiling on the number and size of loans Black banks can offer to their borrowers.

Major deals provide Black banks with a clear and direct pathway to grow their tier-one lending capacity, which means new home and small business loans for their customers.

Money—who has it and to whom and how they lend it—has profoundly shaped the Black American experience for the worse. But Black banks are writing a new, better future filled with opportunity by giving disadvantaged borrowers the chance they’ve been denied for too long.

Ashley Bell is a partner at the global law firm Dentons and serves as counsel for the National Black Bank Foundation.

Don Garber is the commissioner of Major League Soccer.