Synthetic biology could help business save the planet 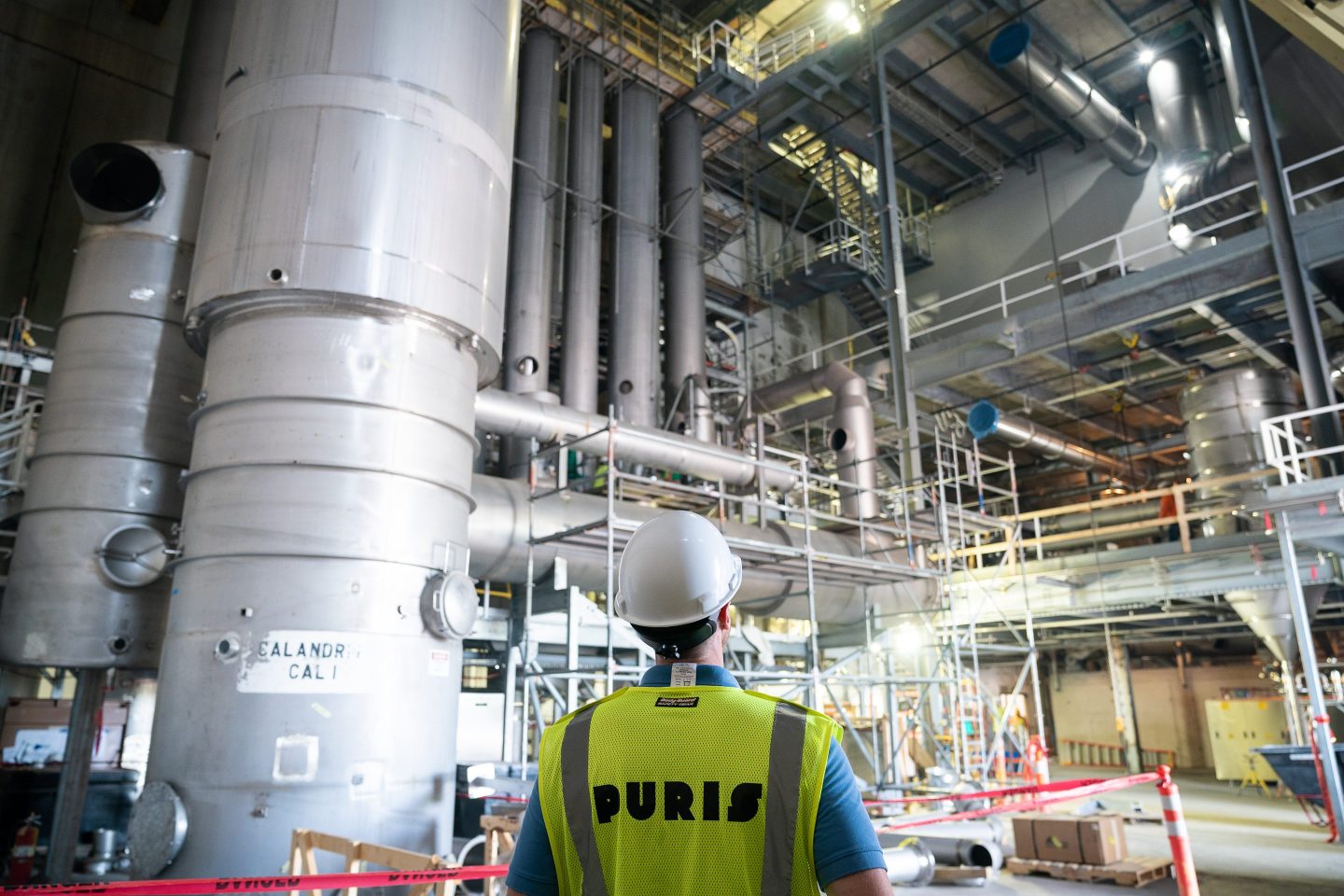 A plant for processing pea protein, a key ingredient in plant-based meats, in Dawson, Minn. “The synthetic biology revolution has begun, and is gathering real momentum,” write the authors.

Just five years ago, Uma Valeti, a cardiologist, Nicholas Genovese, an oncologist, and Will Clem, a biomedical engineer, quit their jobs to start Upside Foods in Berkeley. They developed a biological process to grow synthetic meat products by taking stem cells from animals and eggs; feeding those cells nutrients, carbohydrates, minerals, fats, and vitamins; and speeding up their growth in a bioreactor. Using this technique, Upside Foods has been able to produce beef, duck, and chicken at scale.

Like another California-based startup, Eat Just, which recently launched cell-culture chicken in Singapore, Upside Foods plans to sell its chicken products in supermarkets across the U.S. by the end of 2021—the first step in synthetic biology’s disruption of the $320 billion global poultry industry. Meanwhile, other startups—such as Beyond Meat and Impossible Foods—are rapidly growing the plant-based meats business, whose sales are projected to surge by around 20% a year, on average, to cross $12 billion by 2025.

Almost unnoticed, the synthetic biology (syn-bio, for short) revolution has begun, and is gathering real momentum. Like Upside Foods and Impossible Foods, dozens of startups are using syn-bio technologies to create new processes and products, from fabrics, flavors, foods, and fuels, to dyes, cosmetics, spices, and even data storage—in addition to, of course, blockbuster drugs. The upstarts are bioengineering products that are more durable; are sustainable, because they consume fewer resources such as land and water; generate less waste; and are usually healthier.

Many syn-bio products are competitively priced, while others command premiums because of their durability or lower environmental impact. Investors have been pouring money into the industry; the rate of investment has been growing by 40% year on year for five years now. According to our analysis at BCG Henderson Institute, to be published in September, synthetic biology could disrupt industries that account for as much as 30% of global GDP—or $28 trillion—by 2030.

Interestingly, after a long hiatus, syn-bio innovation is unfolding at an unexpectedly rapid pace, with the food, health, and beauty industries, among others, already feeling the winds of change. New genome-editing technologies, such as Crispr-Cas9, are enabling the creation of novel DNA combinations. They are also reducing the costs of DNA editing and increasing the length of DNA strands that can be replicated without errors. In addition, the viability of cell-free biology has improved, allowing companies to use metabolic cell processes that don’t need live cells and make lab testing faster and less complex.

Micro-organisms can make many of the things that industrial processes currently do, so they offer new ways of engineering (almost) everything that human beings consume. Companies in every industry in the world have no choice, we believe, but to come to grips with this emergent technology right away. It isn’t about defending their existing businesses; syn-bio technologies can deliver competitive advantage, in the following ways:

Creating new products and processes. In the textile industry, Huue produces dyes, such as indigo, made by sugar-consuming microbes rather than from chemicals and petroleum derivatives, while Bolt Threads manufactures high tensile silk fibers by putting genes in yeast and fermenting it. In the agro-industry, Joyn Bio, a joint venture between Gingko Bioworks and Bayer, is reengineering crops so they can access nitrogen from the soil instead of needing nitrogenous fertilizers.

Increasing product and process performance. Many mining companies, including Rio Tinto, Cerro Colorado, and Cananea, use bioleaching and bio-oxidization to extract metals such as uranium and gold from the ores they mine. Using bacteria, rather than in situ mining and heap leaching, ensures mining is more environment friendly, both to the air and the land.

Reducing raw material scarcity. Flavor manufacturers such as Solvay have learned to make raw materials such as vanillin and squalene, a chemical used in pharmaceuticals, by fermenting ferulic acid, a by-product of rice bran oil. Mane uses eugenol from clove oil to make natural vanillin; and Modern Meadow is biofabricating several raw materials such as leather.

Syn-bio will affect industries differently in terms of timing because of two factors. First, the pace at which a technology matures, from the lab stage to manufacturing, differs by industry. The processes don’t scale in a linear fashion; new unknowns crop up whenever the batch size becomes bigger. Second, the rate of product diffusion varies from one sector to another. It’s a function of several exogenous variables such as industry structures, regulations, consumer expectations, and profit margins.

Some industries are therefore closer to feeling the impact of syn-bio than are others. According to our recent analysis at BHI, at least three industries—health and beauty, medical devices, and electronics—will be among those to be immediately affected by syn-bio rivals, as the pharmaceutical and food industries already have been, in the next five years. Sectors such as chemicals, textiles, fashion, and water will be targeted in the medium term over the next 10 years by syn-bio firms, followed, in the long run, by industries such as mining, electricity, and construction.

Given the shortening time frames, CEOs in every industry would do well to take five steps:

Get familiar with the science and the technology. To strategize effectively, and to identify winning technologies, corporations must take time to learn. Smart companies, we find, arrange study tours, invite guest speakers, and organize learning and development days about syn-bio for their top management, strategy, and R&D teams.

Understand all the ways syn-bio could affect the business. Using the shared knowledge and understanding gained by top teams, companies must hold ideation sessions and workshops. They must push the theoretical boundaries of emerging syn-bio technologies to understand the broad arc of the possible. Most companies will have to rethink their business models, make large R&D investments with distant and uncertain payoffs, and enter into complex partnerships and joint ventures with startups.

Scout for successful pioneers. For every opportunity that companies can find, they must scout for syn-bio startups that are developing the products or processes to realize them. It is productive to focus on technologies that have scaled beyond a lab; that is an indicator of the technology’s ability to survive, among other things, a takeover.

Partner with startups. Businesses could tackle the more lucrative syn-bio opportunities internally, which will give them time to move up the learning curve and minimize the impact of technological disruption. They must drive the acquisition of other technologies, keeping in mind that they are bets on the future.

Experiment with a few products or processes. After ranking emerging opportunities in terms of impact and risks, companies must go after the quick wins that may be possible in the short to medium terms. Using the innovative technologies in trial runs and pilot facilities, companies can monitor the costs as well as consumer reactions to syn-bio applications.

Syn-bio opens up innumerable possibilities but poses several challenges as well. As much as they have had to because of digital technologies such as artificial intelligence, companies will have to disrupt their businesses themselves because of syn-bio. As in A.I.’s case, they will also have to learn to deal with a society that is uncomfortable with the idea of reengineering life. Still, using syn-bio at scale is the only way business may be able to save the planet—and redeem itself.

Also by François Candelon and coauthors:
China’s business ‘ecosystems’ are helping it win the A.I. race
China’s response to COVID showed the world how to make the most of A.I.
At these companies, A.I. is already driving revenue growth
How A.I.-powered companies dodged the worst damage from COVID
How “data alchemy” could help businesses make the most of A.I.
Europe is missing out on the A.I. revolution—but it isn’t too late to catch up