Europe is missing out on the A.I. revolution—but it isn’t too late to catch up 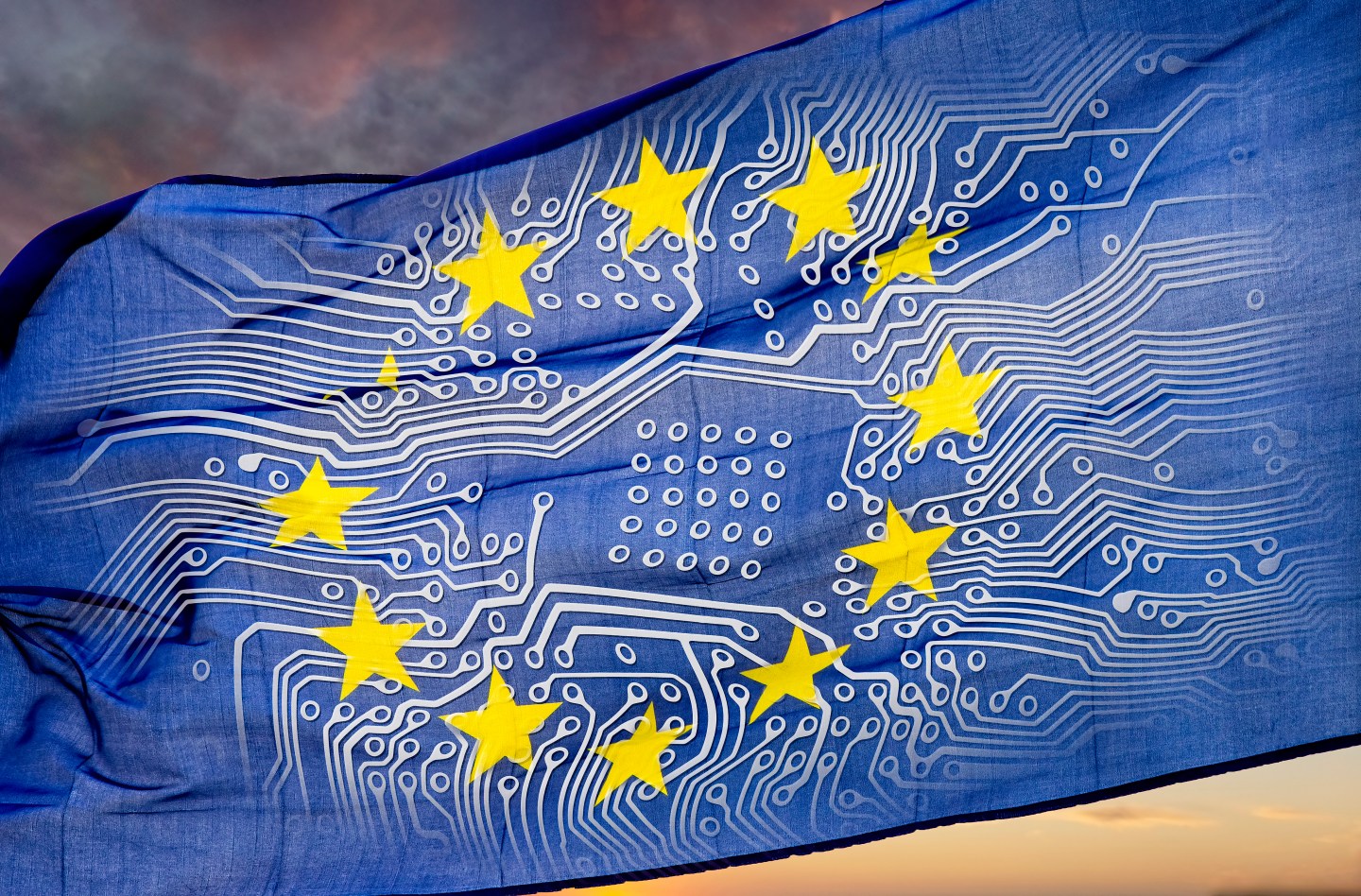 “Europe is at a crossroads,” writes François Candelon. “Missing today’s opportunity to digitize its industry with A.I. will have grave consequences.”
iStock/Getty Images

For decades, the European economy has been characterized by and celebrated for its industry, from manufacturing to construction and energy generation. Even today, industry accounts for 80% of Europe’s exports and private sector innovations. But when looking at this year’s Future 50, a collaboration between Fortune and Boston Consulting Group, which ranks the businesses with the greatest capacity to continually reinvent their businesses and sustain long-term growth, observers can find a sobering situation: Only four European companies make it to the list. And, excluding information and communications technology, there is only one digital-native European firm on the list, and it’s not an industrial one: It’s Spotify.

This is a significant observation, but maybe not so surprising. Actually, the situation seems even more dire when you consider the gap in competitiveness in artificial intelligence between European countries and global leaders, namely the U.S. and China. In short, Europe is at a crossroads. Missing today’s opportunity to digitize its industry with A.I. will have grave consequences for the continent’s long-term competitiveness, and for local employment. Immediate action is needed.

What is happening to European industry?

Every year, BCG and the MIT Sloan Management Review survey thousands of executives to gain insights into cross-industry A.I. practices. This year’s results reveal that Chinese companies are miles ahead of their European counterparts, both in terms of A.I. adoption (80% of Chinese companies vs. 45% in Europe) and in their ability to get financial impact from A.I. (29% vs. 14%). And the gap may only increase in the future: 97% of Chinese companies have a strategy for A.I., compared with just 62% of their European counterparts. It is therefore critical to understand what Europe missed. How did it allow such a gap to grow? Based on our analysis, the answer lies in four dimensions.

“Europe” as a unified entity is a mirage. A single statistic summarizes the situation: Over the past few years, there have been 18 A.I. national strategies published independently by different EU countries. And all of them focus on the same goal—improving local A.I. innovation capabilities—even though the strength of an A.I. ecosystem may also reside in its connections beyond national borders. In addition, diverging local regulations on A.I. and the absence of pan-European initiatives to attract investments (for example, an EU equivalent of the Nasdaq) act as a brake on Europe’s A.I. competitiveness today.

Action from the EU is too fragmented and timid. A lack of central coordination, planning, and prioritization limits the actual impact of any actions taken by the EU. The European Commission (EC) Digital Innovation Hub initiative is revealing: €500 million ($607 million) was spent to set up 450 hubs where small and medium-size enterprises (SMEs) could get training on digital technologies. This is twice as many hubs as China has, meaning resource allocation could have been significantly more focused to optimize impact.

The situation in the EU contrasts with that in the Middle Kingdom, where both local and national governments play key enabling roles: setting goals, distributing funds accordingly, and ensuring coordination to avoid wasteful duplication. And China also invests boldly in the necessary supporting infrastructure to digitize at scale. In 2019, it hosted about 40% of the 500 most powerful computers in the world, over three times as many as all the countries in the EU put together. Even the latest flagship EU initiatives—such as Quantum Flagship, which plans to invest €1 billion over 10 years to develop quantum computers—are dwarfed by China’s recent investment of over €8 billion in its National Laboratory for Quantum Information Sciences.

Data-sharing gridlock has yet to be addressed in Europe. In 2018, the EC found that 60% of companies did not share data with other companies and 58% did not reuse data obtained from others. In contrast, China realized that data is critical in an A.I.-powered world and fostered the development of a data labeling industry. It plays a key role by taking unlabeled data, like street pictures, and adding descriptive tags to convert them into useable datasets. This is a win-win: It helps local rural governments by creating a new, stable source of employment, and it provides an unparalleled volume of data to feed algorithms used by local businesses.

How to reverse the trend

Above all, European governments need to realize that there is strength in unity. Thanks to its cumulative industrial market size and A.I. innovation capabilities, the EU has the potential to become the third global A.I. superpower, possibly the first in B2B. This is why the EC must accelerate implementation of the necessary legislative framework to create a true “Digital Single Market,” with common regulation and policies across member states. The objective, as suggested in the EC’s A.I. white paper, Shaping Europe’s Digital Future: Strategies for Data and A.I., should be to create the underlying conditions for at least one—but not more than two or three, to maintain a critical mass—EU-wide A.I. ecosystem orchestrator to emerge in each key industrial vertical, while catalyzing tech investment inflows. The recent Data Governance Act, albeit focused only on data sharing at the moment, exemplifies what such regulatory foundations could look like.

In parallel, European industrial players urgently need to embrace their transformational journey to put A.I. at the core of their business model. Not only can it bring significant financial benefit, as highlighted in the 2020 BCG-MIT A.I. report, it can help build resilience in these turbulent times. To achieve these things, they should be ready for ecosystem cooperation beyond traditional partnerships, and they should leverage the unique digital capabilities of tech companies to complement their vertical capabilities and disrupt their own sectors. Again, we find a good example by looking East: Ping An, a traditional Chinese insurer, joined forces with Tencent and Alibaba to help it become a pure digital insurance leader.

To remain competitive, European industrial players must upgrade quickly with the best A.I. technologies. And in most cases they can only do so by collaborating with Tech Giants; Europe has rarely been able to generate the best of A.I. on its own. However, to make this association sustainable and mutually beneficial, the players must interact on a level playing field, which can only happen if Tech Giants operate in Europe and abide by European rules. European governments and the European Commission have a key role to play here, but it requires a radical mindset shift: Instead of trying to “win the A.I. innovation race,” they should seek to “win the industrial race with A.I.”—that is, support traditional companies in their work to digitize with A.I. In other words, they should adjust their policymaking to concentrate on joint efforts to attract Tech Giants under conditions for industrial players (for example, costs, privacy) that respect European values, instead of pursuing the fantasy of creating ex nihilo hypothetical local competitors to the Tech Giants.

During the 19th century, with one-third of global GDP, China was the biggest economic power. But it missed the second Industrial Revolution and lost any global economic significance until recently. Let’s not allow Europe to follow the same path in the 21st century by missing the A.I. revolution. Europe has great assets, both in industry and in A.I.; it is the leading region in terms of the size of the A.I. talent pool, and it is home to global leaders in many sectors. There is urgency to act. To address Europe’s A.I. digitization gap, policymakers and companies have a joint role to play, and success can happen only if business and government leaders embrace this transformational journey. As the Italian author Lampedusa once wrote: “If we want nothing to change, we need everything to change!”