China’s response to COVID showed the world how to make the most of A.I. 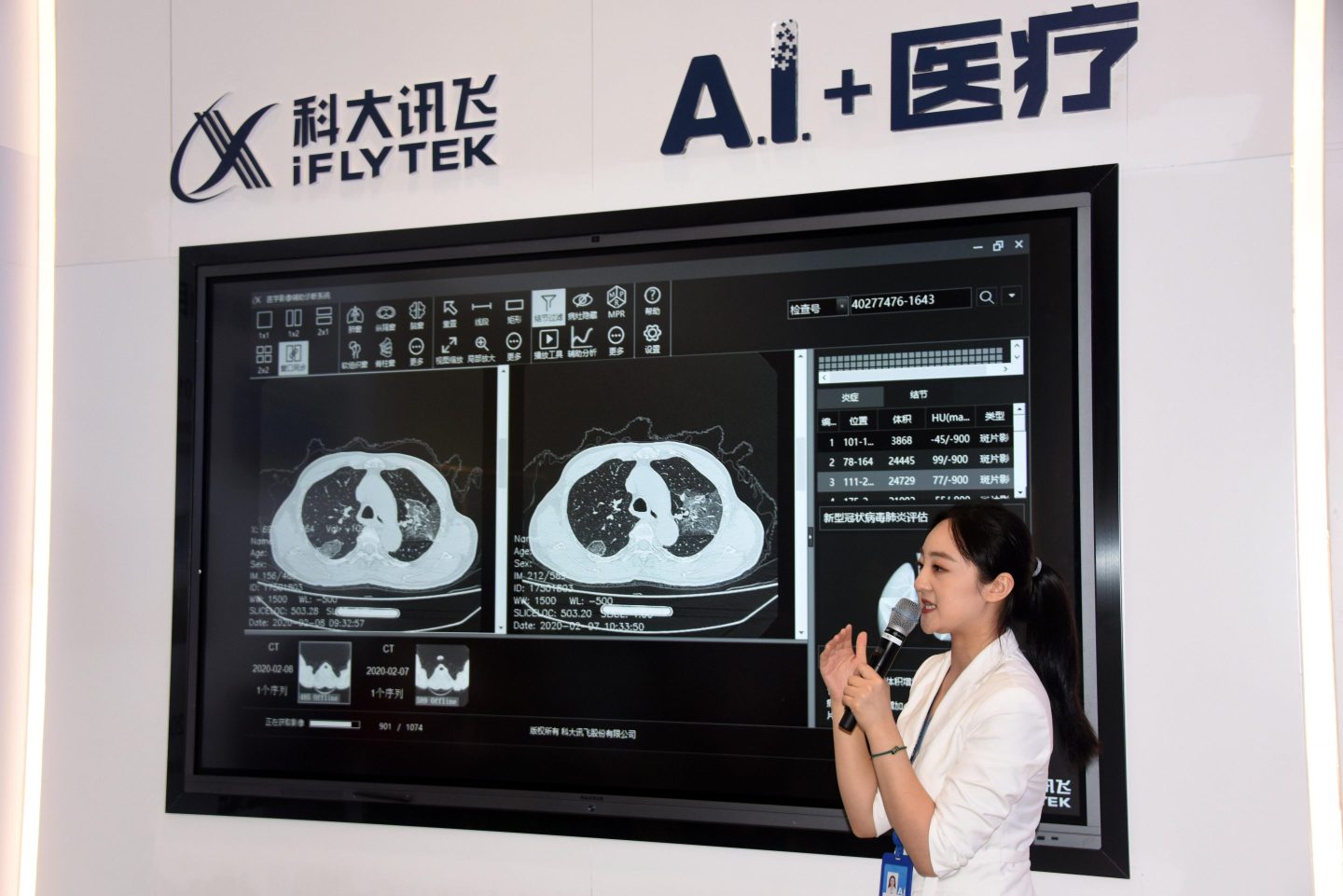 A worker in Hefei, China, demonstrates an A.I.-driven system designed to speed up COVID-19 diagnoses. “What stands out isn’t how China is using A.I. to tackle the pandemic,” the authors write, “but how deep and specialized its health care data, algorithms, and A.I. research are becoming in the process.”
Sun Zifa—China News Service/Getty Images

Soon after Chinese health officials informed the World Health Organization in January 2020 that 41 people in Wuhan had fallen ill with a mysterious pneumonia, China’s A.I. companies started designing or refining their systems and algorithms to fight what would become a global pandemic. In addition to speeding up the deployment of artificial intelligence–based “doctor” chatbots that connect China’s rural communities with health care professionals and machine learning algorithms for pharmaceutical research, the A.I. firms quickly opened four fronts in the then-nascent war on COVID-19—in public health monitoring, medical imaging, robotics, and human-computer interaction.

What stands out isn’t how China is using A.I. to tackle the pandemic, but how deep and specialized its health care data, algorithms, and A.I. research are becoming in the process. Industry-specific vertical innovation is critical for sustained success with A.I., and China’s ability to kick-start that cycle in several industries may enable it to take over the leadership of the global A.I. industry in the not-too-distant future.

To be sure, the U.S. is currently the leader in A.I. innovation, but China too has combined a treasure trove of data with research, firms, talent, and capital to build a powerful A.I. ecosystem. The data are revealing: According to Stanford University’s A.I. Index Report 2021, China had the largest share of publications in A.I. journals in 2019, with 18%, followed by the U.S.’s 12.3%, and the European Union’s 8.6%. In terms of the share of journal citations, China, at 20.7%, overtook the U.S.’s 19.8% for the first time in 2019, while the EU lost share at 11%. While China also overtook the U.S. in terms of the number of papers presented at conferences, the U.S. still accounted for 40.1% of conference citations, followed by China at 11.8%, and the EU at 10.9%.

Moreover, China has been pushing A.I.’s use in business as a policy priority that it announced in the 2017 Next Generation Artificial Intelligence Development Plan. It’s rapidly becoming a reality. According to data from the 2020 BCG MIT A.I. study, Chinese companies may be leading the world in A.I. adoption. Compared with 45% of companies in non-technology sectors in Europe and 40% in the U.S., 76% of non-technology companies in China had incorporated A.I. into processes and offerings by last year. Moreover, 29% reported a transformational impact from using the technology, as compared with 14% in Europe and 13% in the U.S.

China’s growing A.I. research and its use by business is likely to have two far-reaching consequences.

First, at a micro level, developing myriad A.I. applications in each industry will lead to continuous A.I. innovation. That will happen because the A.I. that solves industry-specific problems requires domain-specific knowledge in order to tackle those problems and to improve over time. The algorithms will gain access to the specialized knowledge they need only if they encounter different problems and are customized to tackle each of them. Thus, A.I. will generate more value as companies learn to use it for different purposes, which will result in segment-specific A.I. innovations in each industry—as China’s health care industry exemplifies. In addition, A.I. requires constant improvements in the collection of fresh and fine-grained data, so it can learn and perform better over time. As the feedback loops in each segment gather momentum, they will create specialized applications for the industry that will require the development of even more refined A.I. algorithms.

A.I.’s adoption triggers both innovation and improvement. For instance, A.I.-based computer vision solutions that were quite generic as recently as few years ago have evolved, among others, into those for autonomous vehicles and those for medical imaging systems. The former focus on distinguishing roads, vehicles, traffic lights, and pedestrians; are sensitive to colors and speeds; and work with lidar systems in real time. The latter control magnetic and radio-frequency pulses; collect and interpret the resulting signals; and transform the data into static MRI images. Both sets of algorithms “see,” but do so very differently. Moreover, they must continue to mature in distinctive ways, so they can generate greater benefits in their areas of application.

Second, at the macro level, the widespread adoption of A.I. will result in companies that are more competitive globally—for several reasons. One: Corporations will be able to generate more revenues by using A.I.; the technology can accelerate the pace of innovation and help bring new offerings to market quickly. (See, for instance, our earlier Fortune column, “At these companies, A.I. is already driving revenue growth.”)

Two: A.I. can create differentiating customer experiences such as personalized pricing and A.I.-enabled selling. Three: Companies can reduce costs through A.I. by, say, offering predictive maintenance services that reduce machine downtime. Because Chinese companies have been bringing A.I. products to market quickly and consumers have been willing to adopt them, the country has created an economy that supports A.I.’s evolution.

The implications are clear-cut. Not only should countries and companies drive the adoption of A.I. in technology-related businesses, but also they must ensure its adoption by non-tech sectors. The latter will make a competitive difference, so governments must focus the development and use of A.I. in sectors where they enjoy a global advantage. Creating A.I. ecosystems in key industries by bringing together incumbents, digital giants, startups, venture capital firms, incubators, and academic institutions, and offering support in the form of funding, research institutions, and financial incentives, are logical starting points.

France, for instance, recently identified four areas of focus for its future A.I. efforts: Health care, the environment, transportation, and energy. Specifically, the Grenoble region—already a global research and technology center—hopes to become home to A.I. hubs for both health care and the environment. It has lured 23 corporations, including Atos, Criteo, Google, Huawei, Schneider Electric, and Total; 21 small and medium enterprises; and 11 startups to set up A.I. operations in the region. And the regional government has funded several A.I. professorships at the University Grenoble Alpes, University Joseph Fourier, and the Grenoble Institute of Technology, laying the foundation for these two promising vertically focused A.I. ecosystems.

Everyone marvels at China’s A.I. efforts, but the discussion, invariably, turns into a debate about whether the country should be labeled a pioneer or a villain. The real lesson that China’s A.I. experience teaches us is that in the world of artificial intelligence, as in the case of human intellect, it’s critical to go a mile wide—and many miles deep.

Also by François Candelon:
At these companies, A.I. is already driving revenue growth
How A.I.-powered companies dodged the worst damage from COVID
How “data alchemy” could help businesses make the most of A.I.
Europe is missing out on the A.I. revolution—but it isn’t too late to catch up