How A.I.-powered companies dodged the worst damage from COVID 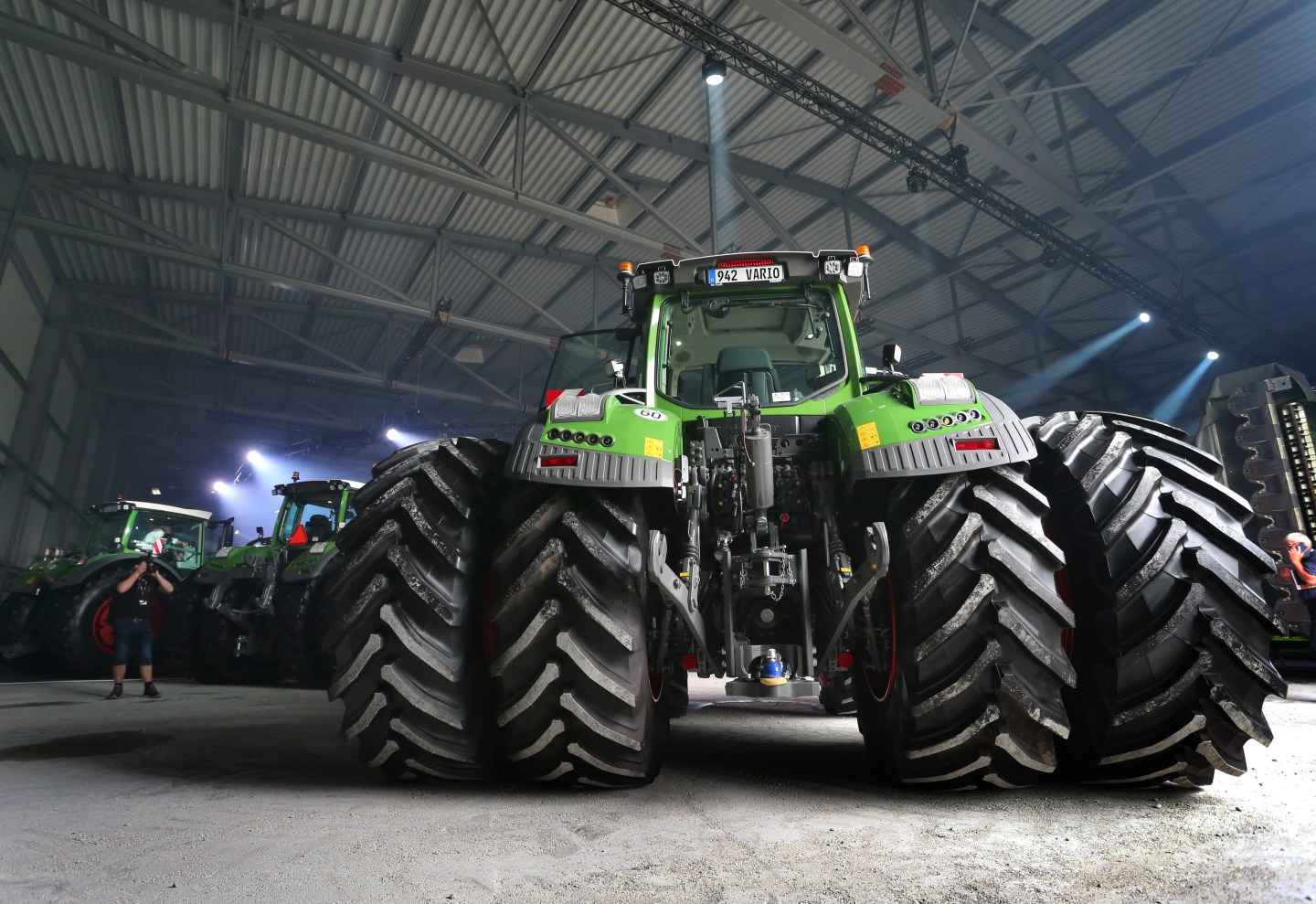 Farm machinery made by AGCO/Fendt at a warehouse in Bavaria, Germany. “As the pandemic begins to ebb across the world,” writes François Candelon, “AGCO may be better prepared than its rivals to return to normal because of its A.I. system.”
Photo by Karl-Josef Hildenbrand—Picture Alliance/Getty Images

By the middle of January 2020, AGCO Corp.—the $9 billion American agricultural machinery manufacturer whose brands include Massey Ferguson, Challenger, Fendt, and Valtra—had begun hearing from its suppliers and customers in China about a possible health crisis. That crisis would evolve to become the COVID-19 pandemic. Immediately, AGCO, which has 41 factories, 37 distribution facilities, and thousands of suppliers around the world, turned to an artificial intelligence–based supply chain risk-management system that it had installed in 2015.

The system provides a composite view of AGCO’s global supply chain, across supplier tiers, in real time. By ceaselessly monitoring data on all the risks it has identified, and by continuously analyzing data from hundreds of thousands of online sources and social media, AGCO’s A.I. system is able to flag any vendor that, for any reason, may not be able to deliver components on time.

Using the latest data, the A.I.-based system predicted—three days before the government announced it—that South Korea would start restricting activity. AGCO was able to accelerate component shipments from that nation before the restrictions took effect. Similarly, the A.I. system forecast Italy’s lockdown seven days before the event, which helped AGCO expedite shipments from its suppliers in northern Italy before they, too, shut down. The A.I. system’s predictions were granular, allowing the company to assign different priorities to suppliers located as close as 50 kilometers from each other. By March 2020, the system’s ability to learn and better forecast worsening conditions and rolling lockdowns helped AGCO tackle the crisis in Switzerland, Spain, and Sweden.

A year later, as the pandemic begins to ebb across the world, AGCO may be better prepared than its rivals to return to normal because of the A.I. system. It can help find stockpiles of critical parts, position personal protective equipment (PPE), and identify where the company should focus to expedite the production of critical components. The key issue, though, is whether companies like AGCO will continue using A.I. systems to manage the post-pandemic peace as they did during the war on COVID-19—or whether business will return to viewing the technology as interesting but not essential.

Turning away from A.I., which enables machines to solve problems and take actions that only humans once could, would be a grave mistake. The future threatens to be an era of unprecedented uncertainty, with change being the only constant. Political chaos, economic nationalism, trade wars, and extreme weather shifts at the macro level, and changing consumer habits, digitalization of products and services, and new ways of working at the micro level were buffeting business even before the pandemic erupted. The COVID-19 crisis only nudged companies—hard—into accepting that the uncertainty tomorrow will be unprecedented, and that the only way to survive is to adopt A.I.

Using A.I. in the future will be critical, I believe. To manage chronic uncertainty, companies must act on three vectors: They must accurately predict the future to reduce uncertainty; improve their ability to react agilely; and cushion the impact of unforeseen events by being better prepared. A.I. is an ally for all three.

First, A.I. can develop ultra-granular forecasts that reduce uncertainty. Second, it can analyze the latest data and provide data-driven insights that can optimize decision-making in real time. Third, A.I. can develop scenarios that will help companies be ready to tackle (almost) anything. Add A.I.’s execution abilities in the form of task automation, and it’s easy to see why using A.I. has become an imperative.

Pioneering A.I.-savvy companies have already started using the technology to minimize costs and maximize revenues, which is revolutionizing some industries. For example, the $42 billion machinery-maker Caterpillar, a client of BCG, is hoping to race ahead of rivals by investing in A.I.-driven predictive maintenance and autonomous operating technologies. Not only does Caterpillar use A.I. to reduce its manufacturing and selling costs, but it also markets A.I.-based services. It installs sensors on customers’ earthmoving equipment, even if made by rivals. And, for a fee, customers can license A.I.-enabled software that will optimize machinery uptime, predict maintenance issues, and operate the equipment 24/7. That’s why, in 2019, the Australian mining giant Rio Tinto picked Caterpillar to be the primary provider of hardware and software for its $2.6 billion “intelligent” iron ore mine project in Koodaideri in Western Australia.

It may seem daunting, but CEOs will increasingly have to undertake A.I.-led digital transformations. Caterpillar, for instance, is reinventing itself as a hardware-and-software company instead of remaining a pure hardware manufacturer. Using the Internet of Things, the company plans to collect data in real time from billions of sensors on the 1-million-plus Caterpillar machines that are in operation every day. Cat Digital, its digital technology division, uses A.I. and digital twins (real-time, virtual representations of physical processes and objects) to learn how customers actually use its products; design better ones; conduct predictive maintenance; and ensure that the equipment works to deliver optimal results. Digital services will be a key driver of the $28 billion in service revenues the company expects in 2026—double the $14 billion it generated in 2016. Caterpillar’s digital transformation is reshaping the manner in which the company works with customers and could change the way it creates value tomorrow: From selling hardware and services, Caterpillar may be able to even offer A.I.-driven customer outcomes such as ultra-granular forecasting of downtimes and highly automated drilling processes.

It’s always important to keep in mind that humans will play a key role in A.I.-driven execution. Their roles will change, and executives will have to learn to work alongside A.I., but they will continue to play a major role. From providing input in algorithm design and decision-making rules, to escalating concerns about analyses and applying results across organizations, people will be crucial to capture value from A.I. During the pandemic, for instance, AGCO Brazil’s salespeople used its A.I. system to figure out how to meet customer orders on time. They modified machine configurations, using locally available components instead of importing them from the U.S. or China. As a result, customers could take delivery of the tractors they needed on time, and AGCO was able to keep its freight costs down—a win-win that was possible only because A.I. and humans worked together.

History teaches us that global shocks often result in strategic inflection points. They alter the nature of competition, usually in ways that aren’t obvious, and the winners are usually companies that act boldly and take risks. The rise of e-commerce giants such as Alibaba and JD.com in China, for instance, was catalyzed by the 2003 SARS outbreak in Asia. In the same way, only companies that reimagine themselves with A.I. at the core today appear likely to win the post-pandemic future.

François Candelon is a managing director and senior partner of BCG, and global director of the BCG Henderson Institute.

Also by François Candelon:
How ‘data alchemy’ could help businesses make the most of A.I.
Europe is missing out on the A.I. revolution—but it isn’t too late to catch up