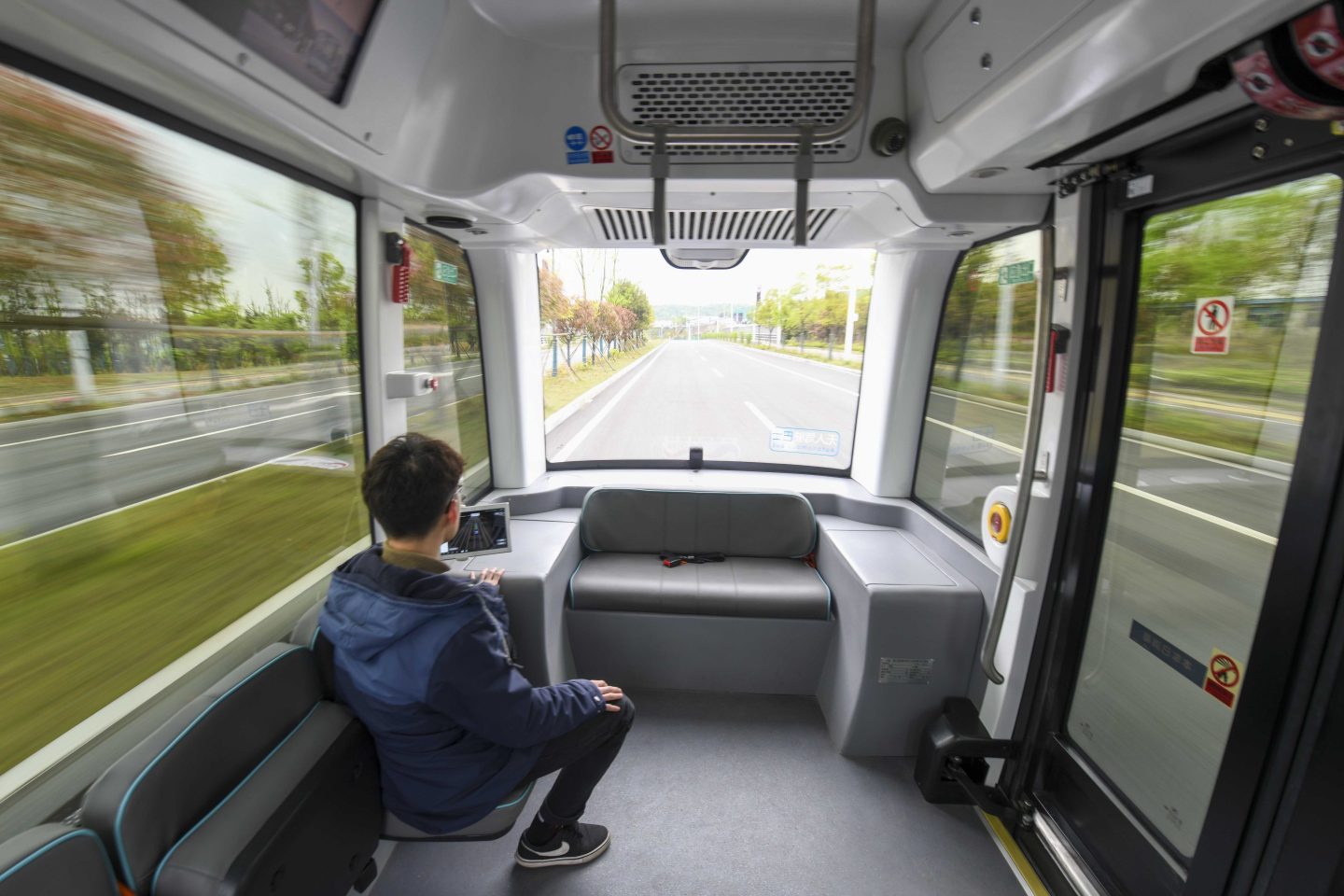 An autonomous driving bus operated by Baidu’s Apollo system runs at a testing facility in Changsha, China. Baidu is one of several tech giants collaborating with China’s government on advances in A.I.
Photo by Yang Huafeng/China News Service via Getty Images

China’s “Sputnik Moment” is what Kai-Fu Lee, author of the famous book AI Superpowers, likes to call it. Five years ago, when AlphaGo—an artificial intelligence–based program developed by DeepMind, a startup that Google acquired in 2014—defeated two of the world’s best human exponents of the board game Go, it came as an eye-opener to China and its A.I. community.

Soon after, the Chinese government launched an ambitious Next Generation Artificial Intelligence Development Plan to build China’s A.I. ecosystem, promising policy support, central coordination, and investments that are slated to cross the $150 billion mark by 2030. The goal: China’s A.I. industry should generate 1 trillion yuan ($160 billion) of annual revenues, with related industries crossing 10 trillion yuan ($1.6 trillion) in annual sales, by the end of this decade.

From every other country’s perspective, it’s instructive to understand how China has succeeded in getting companies across industries to use a labor-displacing technology and ensure that, in several sectors, A.I. lays down deep roots. We’ve been studying the comparative dynamics of A.I. ecosystems in the U.S., China, and Europe, and we believe that ecosystems are shaped by their national environments, which differ in terms of the academic, commercial, political, regulatory, and cultural conditions. The way governments, institutions, and companies—the triple helix of business innovation—interact influences an ecosystem’s formation, especially when an entire nation treats a technology as a strategic priority.

Viewed through this triple-helix lens, several key factors about A.I. ecosystems come into focus. One: Fostering local talent lays the foundation of success. Prodded by policy, Chinese universities have set up A.I. research departments, and the number of bachelor’s and master’s degree programs related to A.I., which added up to about 64 in 2016, jumped sixfold to 392 in 2017 and to 902—or 14 times more—in 2018. By 2017, venture capital investments in Chinese A.I. firms accounted for 48% of the global total, surpassing those in the U.S. for the first time. In 2020, China filed more A.I. patents than any other country in the world while the number of A.I. startups in the country had crossed 1,100— second only to the number in the U.S. Above all, the government’s support of ecosystems that include companies and universities jump-started the development of A.I. applications.

Two: Building society’s trust is critical for A.I.’s use to take off. Consumers in China have greater faith in A.I., and are more patient with it, than Americans and Europeans. According to a 2020 MIT-BCG survey, 86% of users in China trust A.I.-made decisions, while only 39% of Americans and 45% of Europeans do so. That’s partly because cultural and political attitudes to data and privacy in China are different from those in the West, which, in addition to allowing A.I. to flourish, influences the kind of applications that companies develop. In fact, 87% and 89% of Chinese companies deploy A.I. respectively because their customers and suppliers demand A.I.-driven offerings, compared to just 61% and 72%, respectively, in the U.S., and 63% and 69% in the EU.

Three, and separately: The architecture of China’s A.I. ecosystem differs from other regions’ in crucial ways. The government has encouraged China’s digital giants to create A.I. libraries, platforms, and frameworks that will catalyze more partnerships with industry incumbents and enable small and medium enterprises to access A.I. at a lower cost. It has the added benefit that each of those ecosystems will develop a more equitable set of complementors, ensuring that the digital giants can capture for themselves a greater share of the value that A.I. creates.

The links between China’s digital firms and industrial incumbents are unique. As their U.S. equivalents do, Chinese tech giants develop A.I. libraries and frameworks; but unlike what is often seen in the West, these resources weren’t initially meant for research. They were natively designed to solve business problems, which means they are designed to be accessible to a larger audience of less qualified users than the average U.S. researcher or top talent from Silicon Valley. Tellingly, a common practice of U.S. A.I. firms—giving away large parts of their A.I. tools for free—is much more limited in China; the Freemium model is not especially generous for services such as Baidu’s Paddle-paddle, Alibaba’s PAI, and Tencent’s TI. That’s because Chinese A.I. market is more business-oriented. As a result, almost a third of Chinese companies are already declaring significant financial benefits with A.I., against a mere 13% in the U.S., according to our last BCG-MIT study.

In keeping with its past practice of picking national champions, the Chinese government chose Tencent to lead A.I. innovation in computer vision for medical imaging; Baidu for autonomous driving; Alibaba for smart cities; Sense Time for facial recognition; and iFlytek for voice intelligence. In 2019, it expanded the “national A.I. task force” to 15 companies, asking them to collaborate with industry incumbents on data, algorithms, and models; theoretical research; and applications. Increasing the number of champions over time catalyzed competition, which keeps all the champions on their toes and generates spillover effects through diffusion. Thus, China’s A.I. firms are orchestrating ecosystems with industry incumbents, supporting the latter’s digital transformations, and gaining fresh data and access to new A.I. segments in return.

While digital giants in the U.S. and Europe do strike partnerships with industry incumbents—for instance, Google’s Waymo has tied up with Fiat Chrysler to develop autonomous driving systems—it’s less common. And in Europe, for all the emphasis on regulating A.I., state intervention is limited. The initiative rests with business; for instance, the industrial manufacturer Siemens has created an Internet of Things platform, MindSphere, to take on global rivals, while five French companies—Renault Group, Atos, Dassault Systemes, ST Microelectronics, and Thales—recently announced plans to create a mobility ecosystem under the aegis of Software République. While initiatives such as Gaia-X, which aims to become Europe’s data infrastructure coordinator, are picking up pace, there is still a long way to go. With the EU focused on ethical and philosophical considerations of A.I., industrial and ecosystem policy have taken the back seat.

In sum, digital giants and startups in the U.S. take on industry incumbents that can’t adapt and adopt A.I. fast enough, while the incumbents in Europe are reinventing themselves to be A.I.-powered by forming ecosystems with digital partners, building A.I. divisions, and striking alliances. Only in China do technology giants, nudged by the state, orchestrate A.I. ecosystems, and work closely with incumbents to support the latter’s A.I.-led digital transformations. That’s why, contrary to popular perception, the ecosystems that have helped China’s A.I. firms catch up with global rivals will also ensure that business in China races ahead in an A.I.-driven world, where data and applications represent the innovation frontier more than theory and research.

Also by François Candelon:
China’s response to COVID showed the world how to make the most of A.I.
At these companies, A.I. is already driving revenue growth
How A.I.-powered companies dodged the worst damage from COVID
How “data alchemy” could help businesses make the most of A.I.
Europe is missing out on the A.I. revolution—but it isn’t too late to catch up

François Candelon is a managing director and senior partner at BCG, and global director of the BCG Henderson Institute. Michael G. Jacobides is the Sir Donald Gordon Professor of Entrepreneurship and Innovation at London Business School, Advisor at BCG and Evolution Ltd. Stefano Brusoni is professor of Technology and Innovation Management at ETH Zürich. Matthieu Gombeaud is a principal at BCG and ambassador at the BCG Henderson Institute.