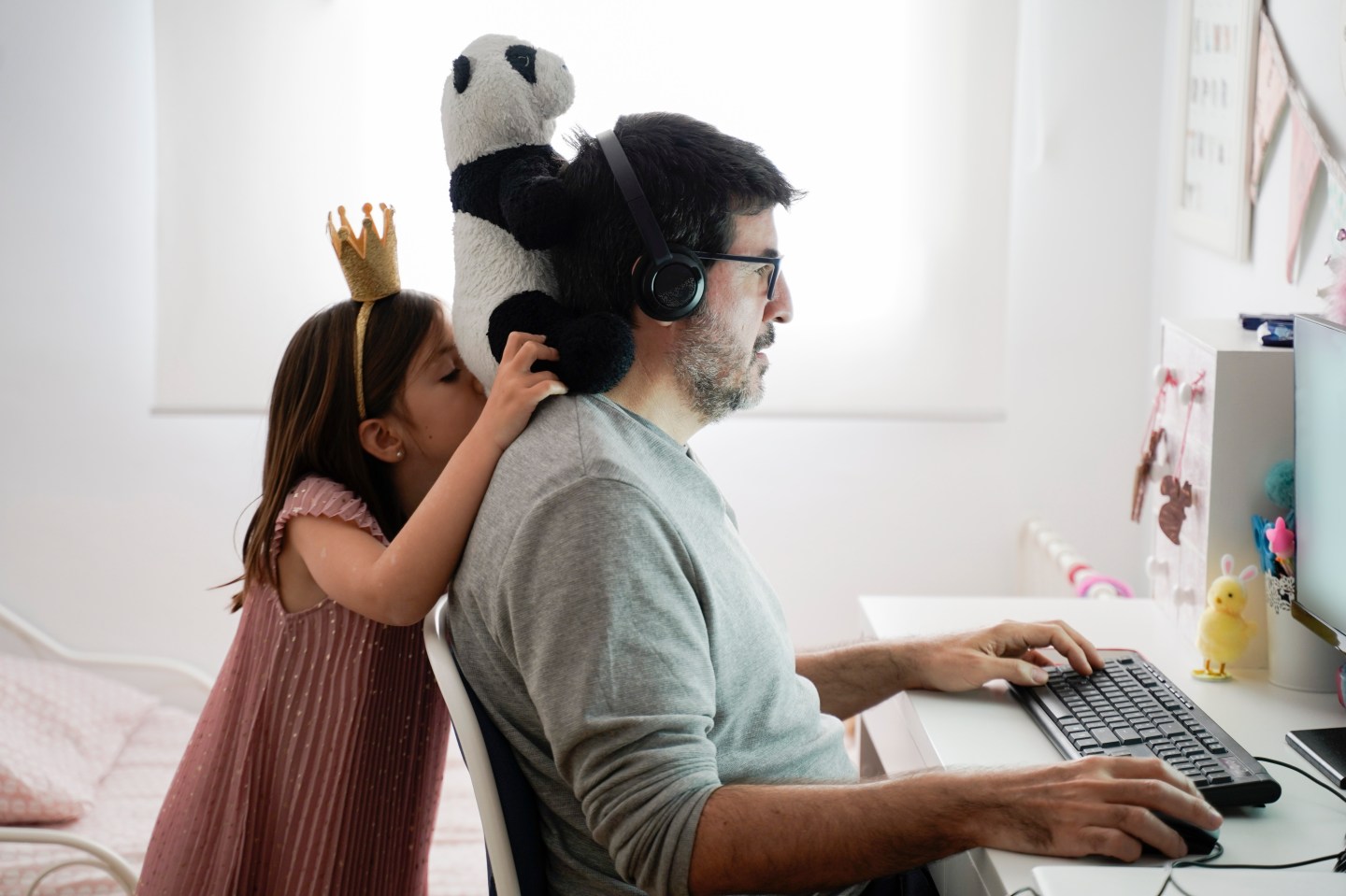 Overall, the shift to working from home has had less impact on fathers.

The losing battle for gender equality at home and in the workplace might come down to a brutal chicken-and-egg dilemma.

Most men say they value—and want to participate in—the unpaid caregiving work that women overwhelmingly shouldered even before the pandemic. But the majority of men don’t actually take on an equal share of caregiving responsibilities unless they already have experience doing so, according to a new report from left-leaning think tank New America.

“Men say caregiving is valuable, and they think they should do it equally—but they don’t do it,” says Brigid Schulte, director of New America’s Better Life Lab and the author of the report.

It’s only when men actually get the experience of becoming a caregiver—“whether they choose to, or they have to—that’s what changes them. That’s this transformative experience in their lives,” Schulte says. “So as a society, how do we get men from this abstract notion that care is valuable, and that they should do it, to actually doing it?”

New America surveyed more than 2,900 adults in 2019, before COVID-19 closed schools and day cares and erased three decades of women’s progress in the U.S. workforce. But the organization’s findings highlight many of the reasons why women, and not men, have been so economically devastated by the pandemic.

New America dug a little deeper into the responses of men who already have caregiving experience—as parents, and as “high-intensity” caregivers of adults or children with medical or behavioral conditions or other special needs. Both the survey and focus-group interviews found that men with more experience providing care are more likely to take on a larger share of caregiving tasks—and are facing many of the same work/life conflicts that broadly undermine working women.

Perhaps most striking: Men and women who are “high-intensity” caregivers reported leaving the workforce at the same rate. Among that group, 50% of men and 51% of women said they had left the workforce or retired early because of their caregiving obligations. That group of high-intensity caregivers also reported pretty similar rates, regardless of gender, of missing work to provide assistance (64% men vs. 71% women) and of reducing their work hours (42% men vs. 45% women).

These obviously aren’t great outcomes—for men or for women. But they do underline how much the current employment crisis facing women is rooted in a caregiving crisis, as we report in the new issue of Fortune—and how necessary paid family leave, greater federal childcare support, and other policy interventions are to create better employment conditions for all caregivers, regardless of gender.

“Women have always borne the brunt of caregiving responsibilities and of taking the hit at work,” Schulte says. “But men are also under a lot of pressure in these high-intensity caregiving situations—and our workplaces don’t respond.”

“If everybody expects women to drop out or expects women to hold back at work, they expect men to keep working. They’re supposed to be the breadwinners,” she adds. “We need public policies, and we need workplace practices that support all people with caregiving responsibilities.”

More than 5.4 million women’s jobs have disappeared since February—accounting for more than half of all net jobs shed by the U.S. economy over the course of the pandemic—and nearly 2.1 million women have dropped out of the labor force entirely in that time. (We’ll get another update on the unemployment crisis for women on Friday, when the U.S. Labor Department releases its monthly jobs report for January.)

Meanwhile, men who are not parents or who do not have “high-intensity” caregiving responsibilities report much less conflict between their work and home obligations. Among men, 41% of “high-intensity” caregivers told New America they had to put off work because of demands on their time at home, compared with 33% of other fathers and 10% of men who are not already caregivers.

“For all of the lip service that we’ve given to gender equality, we really haven’t done the work that we need to do to make it real in the workplace,” Schulte says. “If men are ‘supposed to’ be breadwinners and providers, but their caregiving responsibilities can be so intense that they’re reducing hours and dropping out of the workforce—you know, if that isn’t a huge sign that the current system isn’t working for anybody, I don’t know what is.”