Men like the idea of evolving gender roles, but still don’t do their part at home 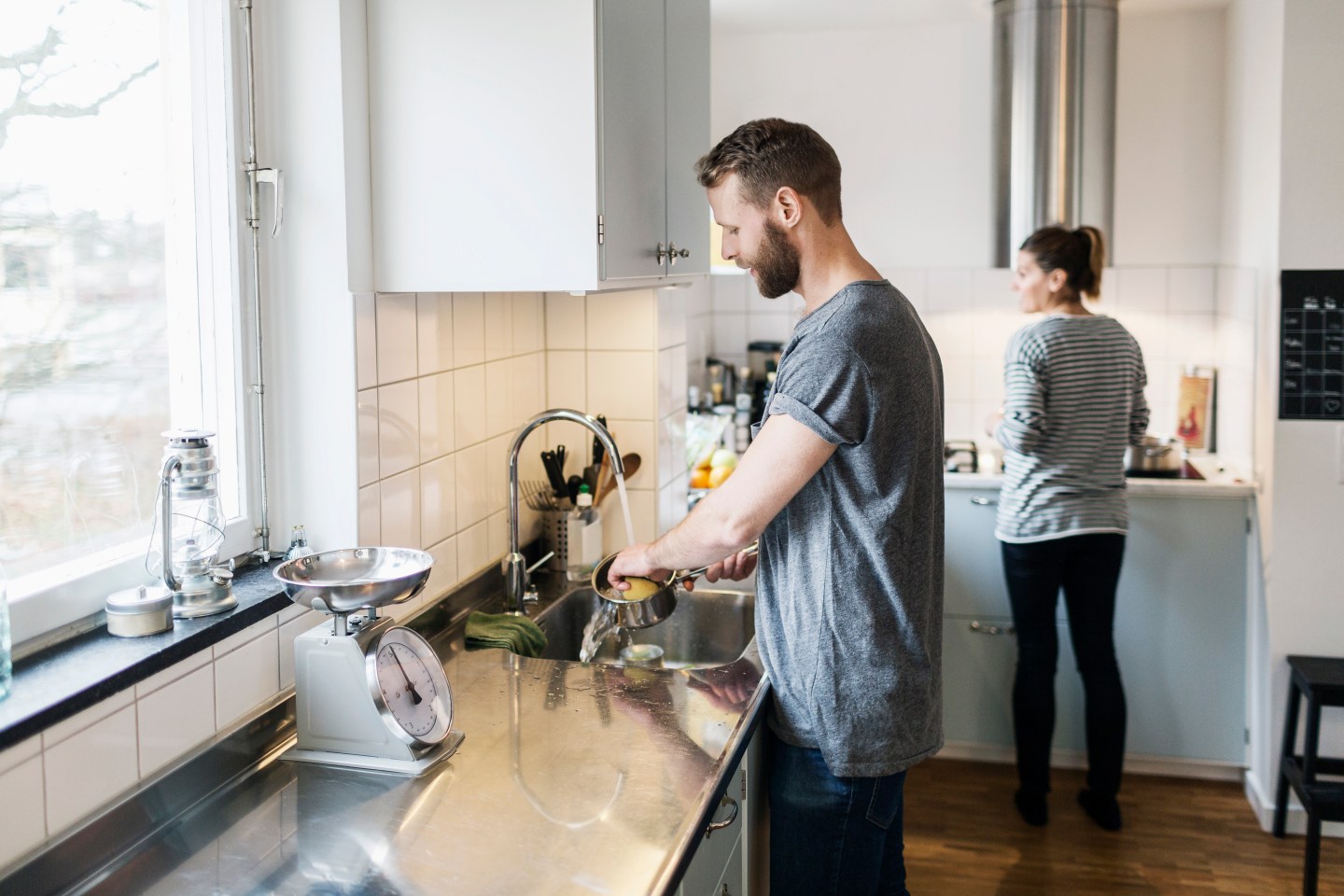 – All talk. What’s not to love about a second paycheck? Millennial husbands certainly seem into the idea: Young men are increasingly comfortable with women working outside the home, in part because of the financial benefit. But those same men are still not picking up the domestic work that piles up for families without a stay-at-home parent.

That’s according to a new report by Claire Cain Miller in the New York Times. Cain Miller looks at a new survey from Gallup that finds that,  despite changing attitudes toward gender roles—favoring women working and running for office, growing acceptance of nonbinary genders—opposite-sex couples between the ages of 18 to 34 are no more likely than their parents to divide domestic labor equitably. In other words: All talk, no action.

The findings reminded me of another report we covered last year, this one about gender diversity on companies’ boards of directors. In that report, male board directors said they strongly supported increasing the representation of women on boards—but that they were sick of hearing about that under-representation or being pressured to do something about it.

In both cases, it’s encouraging to see that men’s attitudes about gender issues are evolving. But without behavior change to go along with those fresh outlooks, gender equality will never be anything but a shared fantasy.

To be fair, Gallup did pick out one bright spot on the home front: younger men are doing more childcare than their forebears. Next up, the dishes.

- Klobmentum. In New Hampshire's primary, Sen. Klobuchar pulled off a surprise third-place performance behind winner Sen. Bernie Sanders and Mayor Pete Buttigieg. To appeal to New Hampshire voters, she had frequently mentioned her support for the state's Sens. Jeanne Shaheen and Maggie Hassan. Sen. Elizabeth Warren, meanwhile, came in a disappointing fourth place for a candidate who was at one point seen as the frontrunner. In her speech last night, she congratulated Klobuchar "for showing just how wrong the pundits can be when they count a woman out."

- Past deadline. In 2017, Vice Media agreed to a $450 million funding deal with a catch: quarterly $10 million payments starting in January 2020. At the time, execs bet that Vice would sell or go public before the bill came around. CEO Nancy Dubuc, who took over after the terms of that deal were set, has renegotiated some of the terms and executed strategies like Vice's acquisition of Refinery29. Wall Street Journal

- Break-up boss. Politicians calling for the breakup of tech giants like Facebook has become a regular thing. But Sarah Miller was one of the first to bring the idea into the mainstream. Now leading the American Economic Liberties Project, Miller (whose husband, Faiz Shakir, is Sen. Bernie Sanders's campaign manager) wants to lead the antitrust movement to completely reshape the American economy. New York Times

- Monthly maven. Melissa Suk is the Queen of Tampons (a.k.a. associate brand director of Tampax). Although the company has an undisputed market share on tampons, it's facing competition from upstarts similarly seeking to hook women for "about 480 periods, 8,640 tampons, [almost $2,000]"—in other words, for life. Read about Tampax's history and its early 20th century female founder, its fight with the startups, and the view from the factory floor: Guardian

- Producer turned powerbroker? Carla DiBello is a former Keeping Up With the Kardashians producer and a former assistant to disgraced casino mogul Steve Wynn. In the past half-decade, she's become enmeshed in the Kingdom of Saudi Arabia and its $300 billion sovereign wealth fund. DiBello is helping the fund negotiate a deal to buy the majority stake in Newcastle United, providing executives with access to the fund's chief, and more. Her role is mysterious—both because of the unusual nature of having a woman involved in the Saudi kingdom's investments and because of her reportedly murky relationships and responsibilities. Wall Street Journal

- Early birds. How much does a pre-term birth cost? For one family: $4 million. Between shrinking coverage in the private insurance market, transportation costs, childcare for older siblings, lost wages, and more, early births can destroy families' finances. New York Times

- Disease differences. As scientists study coronavirus, they're coming to one possible conclusion: it affects men more than women. While women are more prone to autoimmune diseases, men seem to contract these types of viruses more often; the original 99 patients admitted to the hospital in Wuhan included 67 men and 32 women. Some scientists now think that discrepancy is due to biology rather than differences in exposure. Financial Times

- Must-see spots. Looking to celebrate the centennial of the Nineteenth Amendment this year? Here are some options: a pilgrimage to Seneca Falls, New York, visits to exhibits throughout the Midwest that will honor the first three states to ratify the amendment granting (white) women the right to vote, or a stop by the Library of Congress's exhibit. Civil rights tours in Montgomery, Alabama, meanwhile, will give special attention to the women at the heart of the movement. You can check out more of the NYT's themed travel guide here: New York Times

Is the patriarchy too big to fail? The Baffler

"One of my favorite things is seeing a woman on a ladder with a tool belt. Yes girl, do it!"