Jeannie Schulz, widow of ‘Peanuts’ creator, on bringing Snoopy and friends to a new generation 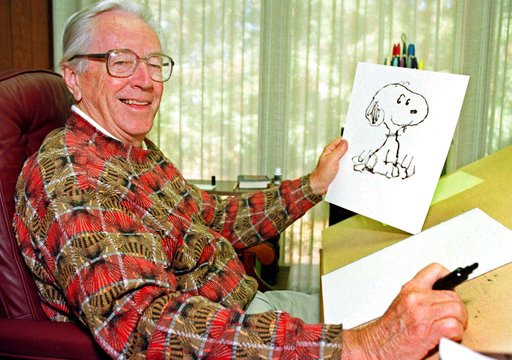 Cartoonist Charles Schulz displays a sketch of his beloved character Snoopy in his office in Santa Rosa, Calif., on Feb. 12, 2000.
BenMargot—AP

I had an idyllic childhood in the outskirts of Tel Aviv, despite the fact that my elementary school featured a bomb shelter. One of my best memories is of my dog, Snoopy, a mixed breed that my mom got for us when I was around 7. I had loved the Peanuts gang from an early age (even dubbed in my native language, Snoopy was Snoopy), so this seemed like the logical name for our puppy—despite the fact that he definitely didn’t have any beagle in him.

The simplicity of Peanuts resonated with many other children across the globe, and still does. Peanuts first appeared as a comic strip in 1950, and was eventually syndicated in 2,800 newspapers in 21 languages. The animated shows and cartoons it spawned expanded the brand’s reach even further.

Today, Peanuts Worldwide, the company that owns the rights to all things Snoopy, Charlie Brown, Lucy, and Linus, has three owners: a company called Wildbrain, which is the majority owner, plus Sony Music and the family of Charles Schulz. You may have heard about the deal Peanuts Worldwide inked with Apple in 2018, bringing all of the brand’s original series and specials to the iPhone maker’s streaming service. (The arrangement sparked a bit of a kerfuffle late last year, when homebound families realized they wouldn’t have access to the Peanuts holiday specials without an Apple subscription, though the tech giant eventually partnered with PBS for a broadcast airing of the beloved content. Phew.)

Now, Peanuts Worldwide has also partnered with a site called GoNoodle, which creates “movement and mindfulness” videos, as part of a campaign to “take care.” According to both companies, the initiative aims to promote three messages to kids: Care for yourself. Care for each other. Care for the Earth. It will consist of animated online videos, special curriculum, and social media engagement—you know, how content spreads these days.

To hear more about all of the above, and to reminisce over a simpler time, I recently spoke with Jeannie Schulz, the widow of Peanuts creator Charles “Sparky” Schulz. Here is an edited excerpt from my recent conversation with Jeannie Schulz—and yes, I told her about my dog Snoopy.

Fortune: Tell me about why you chose this partnership and this particular message, to “take care”?

Schulz: It really developed out of our interest in having Peanuts material that was suitable for 3- to 5-year-olds and their parents. It fits right now because people are looking to their laptops to engage their children in something helpful and fun.

There are a lot of us in the Peanuts community who care very much about the environment and kindness to each other. So it also developed out of that.

Why do you think the Peanuts brand still resonates with kids and parents?

My husband was a great observer of people and situations. He dealt with them with humor. He could have written essays and books and been preachy. But that was not his interest in life. His interest in life was drawing funny pictures. But obviously he had a philosophical turn of mind. He observed what was going on and observed the ridiculous in situations. Lucy’s crabbiness. Linus’s frailty. Charlie Brown’s inability to do things right. And yet, his characters always had a human, redeeming feature about themselves. You liked Lucy. You liked to see her get her due, but you still liked her because she stood up for herself.

I know your husband said there was a little bit of himself in all of the characters. Which one is your favorite character?

I’m not good at favorites. I always say Sally because I called Sparky my “Sweet Babboo.” He gave that [line] to Sally to torment and pester Linus [her crush] with. I think he saw a little bit of Sally in me.

We are living through a pandemic, and in a very divided country. How much of the outside world impacted your husband’s work?

He did bring current things into his comic strip. During election years and election seasons he had the kids [the Peanuts characters] run for office. There’s one special or comic strip where Lucy is a reporter and goes around asking everyone what their position is on this or that. It is all a reflection of what is going on in the world. But of course it can’t be too pointed. It has to be funny.

We have a classic strip that we put in an exhibition, of Snoopy holding an AK-47. The context was: I have to get a library card to go to the library, or a license to go fishing, but you don’t need a license for this?

What do you hope kids and parents take away from the GoNoodle content you are now creating?

I’m hoping that it will be heartwarming. That it will give the people who watch it, parents and children, a good reminder. There’s one we’re doing where every time one of the characters does something kind, a heart pops up on Charlie Brown’s tree. I hope parents will say to their children, “Oh, you were nice to your little brother. I’ll bet you have a heart on Charlie Brown’s tree.” It’s simple enough.