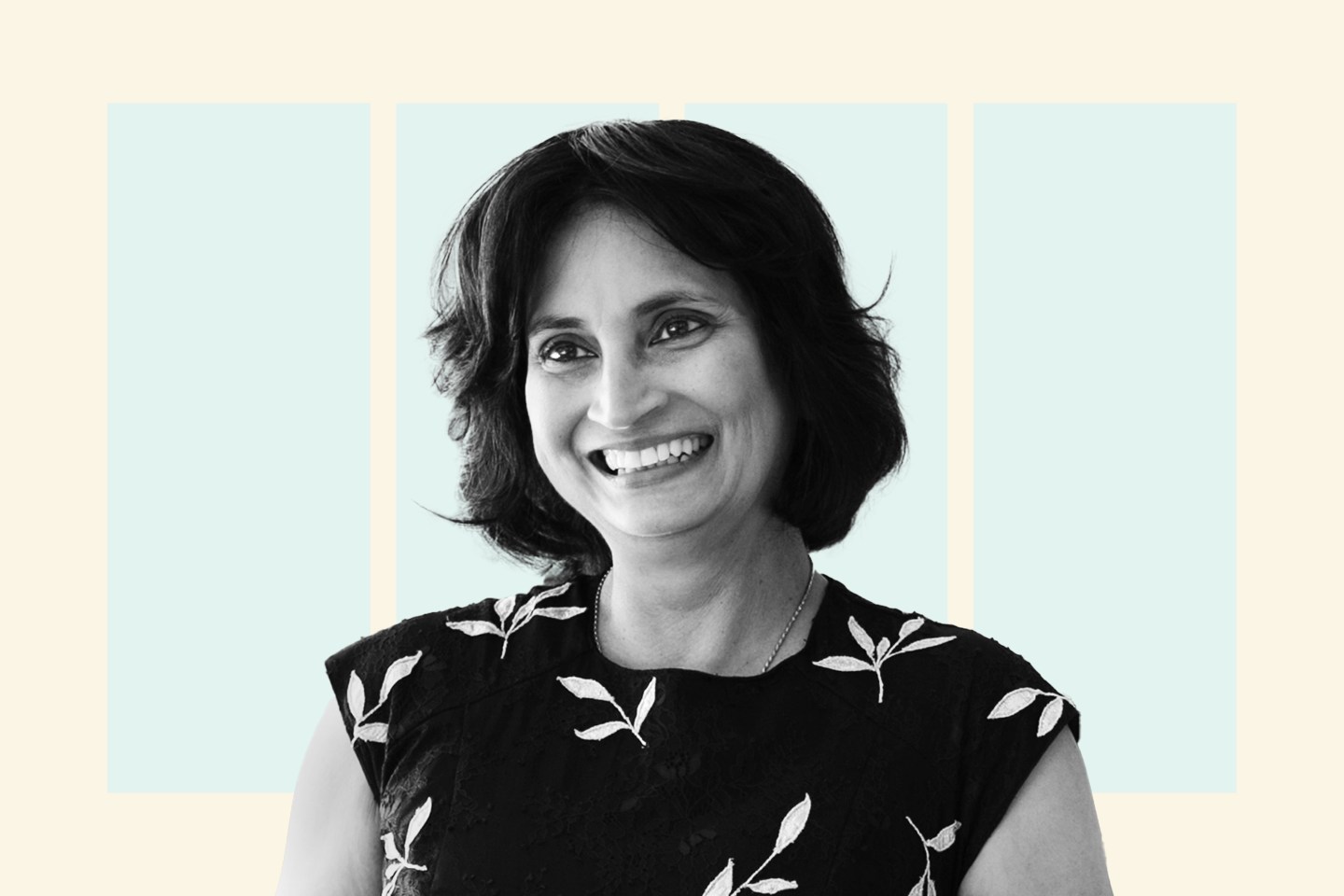 Padmasree Warrior has spent most of her career in prominent C-suite offices, running large hard-technology operations at Cisco, Motorola, and Tesla competitor Nio.

So why is her new startup devoted to…reading?

Sure, it’s more high-tech than that. But Warrior, long one of the most senior women in the male-dominated tech industry, has now swapped enterprise software and electric vehicles for online book clubs. Her new startup, Fable, is the result of 18 months spent trying to create a more thoughtful—and less toxic—social media app for book lovers and some of the companies that employ them.

Fable has been quietly gearing up for months, but on Thursday it officially unveiled its new app for both the Apple and Google Android stores. It has also raised $7.25 million in seed funding from investors, led by Redpoint Ventures, for an undisclosed valuation. Since closing the deal in July, Warrior has used the money to hire more employees (Fable now has 19 full-time workers, plus “about five” contractors) and to continue building out Fable’s services.

Customers have to buy ebooks through Fable’s website to get the most out of the app—but it’s less of a retailer than a subscription-based recommendation engine and private social network. Those who pay an annual membership fee of $69.99 get access to thousands of free titles in the public domain, plus recommendations of works selected by prominent writers and other guest experts. (Currently, humorist David Sedaris is recommending biographies of “iconic alcoholics,” while novelist and poet Chitra Divakaruni is recommending books about how “the immigrant story is an American story.”) These books must be purchased for an additional fee, but Fable customers can then form digital book clubs, to share notes and discuss a particular work with friends through the app. (There is also a free version of Fable, which allows users to read some books and join discussions but not start their own.)

“The two primary goals that I started with were, How do you modernize book clubs and bring them into the digital world?” Warrior says. “And there are millions of books out there, so how do you help people find the best ones?”

Her biggest seeming competitor is Goodreads, the dominant, if frequently criticized, book-review site now owned by Amazon. “Almost everything about Goodreads is broken,” opined the headline of a September 2019 column in Medium’s OneZero, which criticized the site’s “ugly design and poor functionality” and the difficulty of finding and sharing book recommendations with others on the platform. “Readers and authors deserve a better online community,” OneZero declared.

Warrior seems to have paid attention to such demands (and the advice of Goodreads cofounder Otis Chandler, who spoke with her after he left Amazon in 2019). “I think of Goodreads more as a list app, where you keep track of books you’ve read and want to read,” she says. “But it’s also become pretty noisy. And it’s not where I go to find what are the three great books I should read on a particular topic.”

Still, Goodreads has 120 million users, a spokesperson pointed out. “We continue to evolve our design and user experience,” CEO Veronica Moss told Fortune in an an emailed statement, promising “more updates across the board.”

Readers can be a passionate market, and Warrior hopes that plenty of individual book lovers might want to pay for Fable’s curated recommendations—and a way to extend their quarantine book clubs beyond Zoom. But Warrior and her investors also see a big opportunity to make reading for pleasure into a business-to-business revenue stream. Fable is selling corporate memberships, hoping to become an employee benefit similar to how some employers are using meditation apps Headspace and Calm (now privately valued at $2 billion) or therapy app Talkspace (which on Wednesday announced a SPAC that would value it at $1.4 billion).

Such mental-wellness programs have become even more popular in the past year, as the pandemic keeps most knowledge workers in work-from-home isolation and continues to worsen everyone’s mental health. “There’s a lot of science that talks about how reading is really helpful for our cognitive fitness and our mental health: It allows us to relax more, it allows us to de-stress, it increases empathy,” Warrior says. “This is all about human connection with a meaning and a purpose.”

And it’s a business model honed by her career at Fortune 500 enterprise-tech companies. Warrior, who spent seven years as Cisco’s chief technology officer and who currently sits on the boards of Microsoft and Spotify, says that Fable has already signed up corporate customers for pilots, although she would not name any.

“I think every single company I’ve ever worked for has had a book club,” says Annie Kadavy, the Redpoint managing director who led Fable’s seed round (and who ran strategic operations for Uber’s freight division before joining the venture capital firm). “The consumer version is a little bit easier to understand, but the idea that this is also applicable to enterprises plays very well into Padma’s strength in terms of a business model.”

So just how did a woman long considered to be one of the most powerful women in tech—a former CTO at Motorola as well as Cisco, last seen as the U.S. CEO of Chinese electric car company Nio—swerve into reading and mental wellness?

“My career has always been nontraditional that way, and I’ve shifted industries throughout,” Warrior points out, adding that when she left Cisco and “went to the car industry, people thought I was crazy.”

Three years after joining Nio, and three months after its $1 billion IPO, Warrior stepped down from her CEO role in December 2018, citing “personal interests” and her desire “to tackle the next big challenge.” She says today that she always intended to stay for three years, and that she wanted to be able to focus on developing a startup in the wellness industry—but also, she admits, the worsening U.S.-China trade relations under President Trump yielded some unforeseen complications for Nio.

“A lot of the strategies we had for the U.S. subsidiary of this [Chinese] parent company were changing quite dramatically,” she says, adding that she hopes the incoming Biden administration pursues a “more balanced” trade policy toward China: “The relationships at all levels are just so strained. China is a big market, and we need to figure out how to coexist.”

Fable is also allowing Warrior to explore another path her career (and perhaps the nation) could have taken in 2015, back when she was reported to be under consideration for Twitter’s CEO job. Warrior, who has more than 1.4 million followers on the social media giant today, says that running Twitter “is something that I would have loved to have done—but Jack [Dorsey] is doing a great job.”

Still, Twitter does need to recognize its power “as a platform people use or abuse to amplify their agenda,” Warrior adds, days after Twitter banned President Trump for inciting violence from his account. “And I feel, finally, they’re stepping up and taking responsibility for it.”

Which brings us back to her ambitions as a newly minted social media founder and CEO. Fable is “not a social media company,” Warrior says—except it kind of is, one that’s made the decision to charge subscriptions instead of selling advertising and its users’ data. Fable also has established community guidelines around what constitutes hate speech, and its book clubs have “moderators” who have the power to kick out users who violate those guidelines.

As Fable scales, the platform’s largely paid nature may help keep out some of the worst behavior that troubles free social media platforms—although Warrior is bracing for those familiar challenges.

“If you think about Facebook, Twitter, TikTok, Snap, and others: What are the good things about them? And how do we incorporate that but not the noisy part?” she says. “We just need to be really careful that it doesn’t devolve into all the bad things that current social media companies allow us to do.”