Padmasree Warrior On The Future of Transportation & Tesla 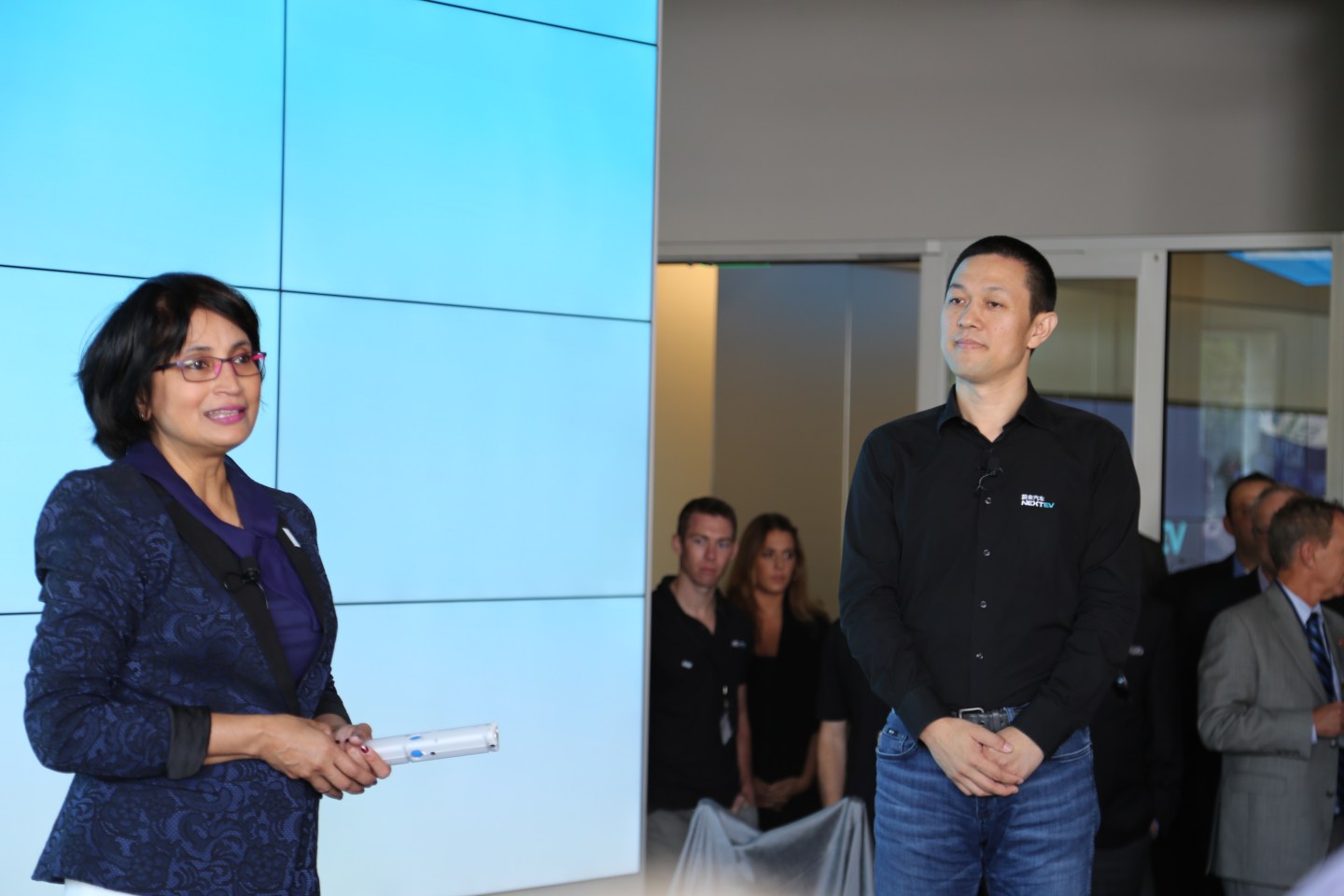 One of the most well-known women in Silicon Valley, former Cisco chief technology officer Padmasree Warrior, hosted a coming out party this week for her new electric car startup NextEV.

The company, along with Tesla Motors, big auto companies, and a handful of new startups, is looking to remake transportation by building cars that are electric, autonomous, and connected.

Fortune took the occasion of NextEV’s grand opening of its San Jose, Calif. headquarters on Thursday to chat with the long-time tech executive about the future of auto industry, why she wants to be part of it, and what’s next for NextEV.

This transcript has been edited for length and clarity.

Fortune: Let’s start off by talking about why you wanted to join an electric car startup? That’s something totally new and different for you.

Warrior: It is. When I left Cisco I wanted to go do something very different. I wanted to go to an industry that is ripe for change, yet some place where I could utilize all of my experience and my expertise. So I was looking for where can technology—all of the mobile, cloud, software stuff that I’ve done—be applied to the beginning of a change versus in the middle of the change.

I was looking at two verticals: transportation and education. I feel like these are two industries where tech has been on the periphery versus being central to those industries. I was thinking about doing my own startup, perhaps in education. I met William [Li, the founder of NextEV], and he was looking for someone to lead his vision of creating a global startup, and the nexus of that being in Silicon Valley.

For more on Tesla’s Autopilot watch our video.

I went to have breakfast with William and we started talking about why transportation is such a pain. It really hit home to me. I was just fighting traffic to get to that breakfast meeting and you know how traffic can be in the Bay Area. And I got to thinking, this is truly, very real for me. Anytime you think about getting in your car today you cringe: You’re stuck in traffic, or breathing exhaust fumes. I thought this is an opportunity to maybe change a whole industry. That’s why I joined.

This office in particular is working on software and artificial intelligence. Tell me about the type of engineers you brought in.

So when I got here I was employee No. 16. None of this was here, it was an empty shell. We were all huddled in this one little room. Literally and metaphorically it was a blank sheet of paper.

I had to think about what is the vision for the company? What is the strategy? What kind of people do I need? In some ways that’s very freeing. Our vision is to create electric autonomous vehicles, so what kind of skills do we need? Obviously you need people that know how to build cars. At the end of the day they are very complicated electro-mechanical systems. They weigh thousands of kilograms and move very fast. Safety is of prime concern. So you need engineers that understand that.

In addition to that, I also need people who understand software and software-defined hardware. So starting from the application, how would you drive the processor that you would choose? Also data scientists, people who have expertise in AI, machine learning, and augmented reality—even the gaming industry. I made a list of the types of people I need and I hand picked the 150 people that joined this company because it’s really important to me that they are not only great technically but they are also a good fit with the culture.

When will NextEV show off and start selling cars?

I would say between now and all the way through the end of next year we’ll have a series of announcements. At the end of this year we’ll talk about and show the world our Supercar—our hypercar—that we’ve previously talked about. It’s a very high performance vehicle, but in a way it’s a high-performance EV. We want to leverage our tradition from Formula-E and bring that into the Supercar. You’ll see us show that product at the end of the year.

It will be an international product?

Our market entry is China. So the first three vehicles are for China. In the U.S. we are focusing on autonomous vehicles.

I drove by LeEco (another electric car startup) down the road. What is behind the trend behind electric cars and Chinese interest?

It’s time for a change in the transportation industry. It’s a 125 year-old industry and the majority of that time it’s been relatively the same, relatively homogenous. The automotive industry has primarily focused on the driver and the experience for the driver. Not so much for the passenger.

It’s not unusual if you think about the computing industry, which has gone through three or four life cycles. From big mainframes to PCs to the mobile Internet to conversations and personal assistance. These are big changes and Silicon Valley has been at the heart of it.

It’s time for the transportation industry to change now. EVs in a way, are not only are they better for environment, but they are easier to maintain. I have an EV, a Tesla [Model S]. I’ve had it over two years. I’ve never had to take it for anything to be fixed or emissions testing. The maintenance is a lot less. It improves the user experience.

In many ways we are not building a car, we’re building a robot that looks like a car. It’s a whole different paradigm. If you think of the vehicle in those terms, a lot of the expertise is in the Valley. That’s why there is a lot of interest.

Why EVs? China is the biggest market. You heard our founder talk about how pollution is a big issue for him. EVs are one solution for that.

In terms of Tesla, do you see the company as an inspiration and possibly a competitor?

W: I see it more as an inspiration. I give Tesla and [Tesla CEO Elon Musk] a lot of credit for really bringing the EV back. It was literally dead before Tesla made it a serious product. Having said that they were started almost a decade ago. A lot has changed, even the technology landscape in the last 10 years. We believe we are first and foremost a digital company. If you think about transportation in the digital era, there’s a lot more to do. This is where we differ from Tesla.

I’d love nothing more than to sit down with Elon and talk to him about his lessons learned and what not to do. I’m not sure if he’s open to that, but this is an invitation from my side.