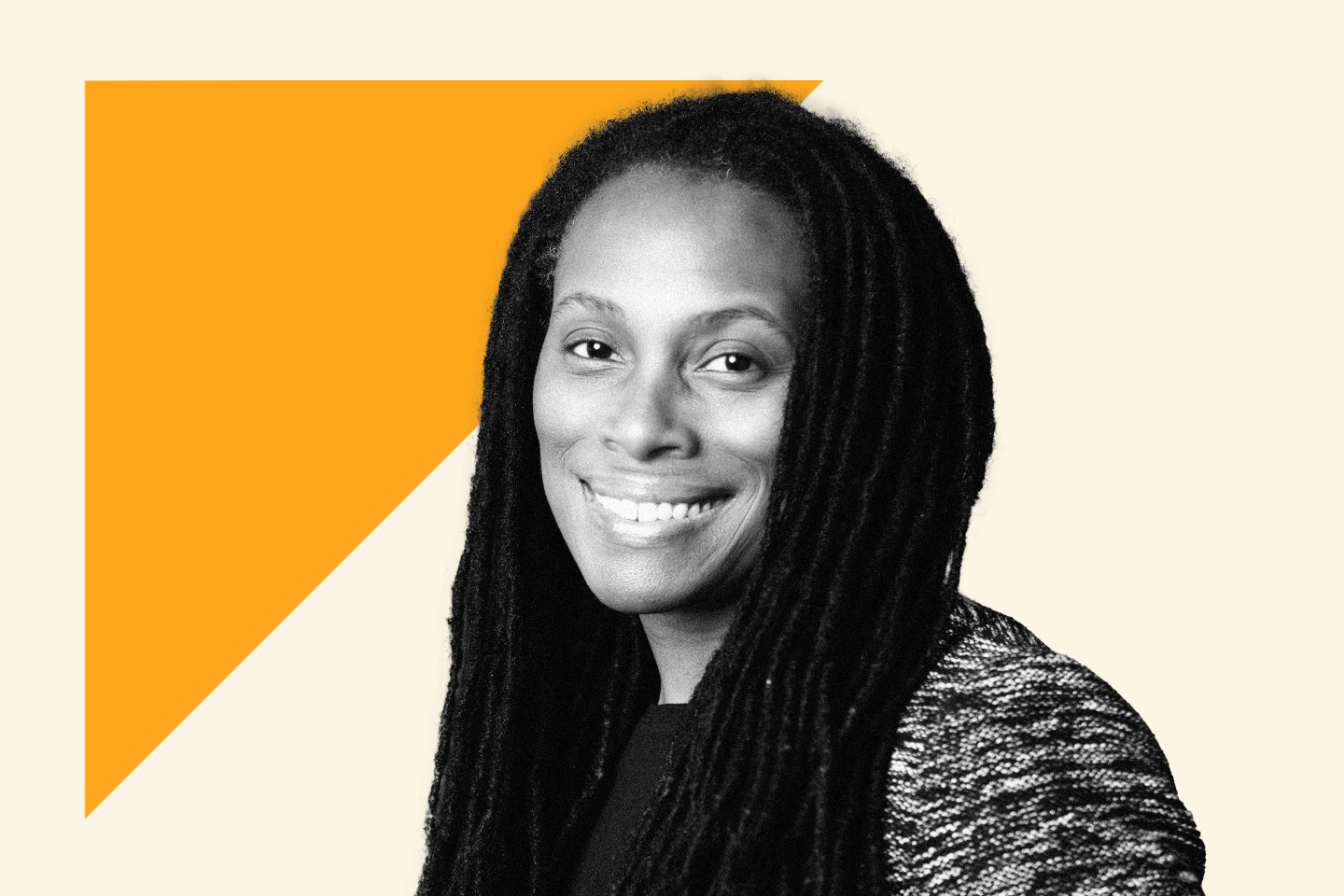 "What is so difficult for me, as a physician and as a researcher, is just how hyper-politicized everything has been," says Dr. Marcella Nunez-Smith, the Yale professor and researcher who will chair the Biden administration's COVID-19 equity task force.
Courtesy of Dan Renzetti/Yale University

When President-elect Joe Biden is inaugurated on Jan. 20, he will inherit responsibility for stopping a pandemic that has disproportionately killed Black, Indigenous, and Latinx people. So will Dr. Marcella Nunez-Smith.

Nunez-Smith, a Yale professor, physician, and researcher who has long studied racial disparities in health, in November became a co-chair of Biden’s transition task force on COVID-19. Last month, the President-elect named her to a prominent, new—and historic—role in his upcoming administration, running a health equity task force focused on the pandemic. The task force is inspired by legislation introduced to the U.S. Senate in April by now-Vice President-elect Kamala Harris; her bill never made it out of committee, but has shaped the incoming administration’s focus on the longstanding health inequities that have become so tragically and nationally visible this year.

“We started with different levels of awareness at the beginning of the pandemic, about the legacy of systemic, structural racism and inequality and how that often manifests,” Nunez-Smith told Fortune in an interview this week. “It does feel different, now. There is this awareness.”

Which is not to say that the problems she’s taking on will be easy to address. Nunez-Smith is particularly worried about the rise of misinformation that is already complicating the nation’s vaccination efforts—and the mistrust in science that has undermined even basic public health efforts to manage the pandemic, like recommendations to wear masks.

“What is so difficult for me, as a physician and as a researcher, is just how hyper-politicized everything has been,” she said on Tuesday evening, less than a day before a mob of President Trump’s supporters stormed the Capitol building. “What keeps me up at night is misinformation and disinformation, and just knowing how fast it’s moving.”

Some of Nunez-Smith’s core focus in the Biden administration’s first 100 days will be on health equity relating to the sluggish vaccine rollout. That will include working with local and community leaders on education and outreach efforts to communities of color, and finding the right “trusted messengers” to combat the spread of misinformation to various groups. While she provided few specifics about what her job will practically entail, Nunez-Smith also said that ensuring equitable access to PPE and testing will be priorities for the nation’s pandemic response. (She will also be remaining at Yale, if temporarily stepping back from some of her responsibilities there.)

In the following Q&A, which has been condensed and edited for clarity, Nunez-Smith also discusses what role for-profit companies can play in the pursuit of greater health equity—and why it starts with collecting better data.

Fortune: Between your role as co-chair of the transition’s COVID-19 task force and your upcoming role in the Biden administration, what are you focusing on right now?

Dr. Nunez-Smith: Everybody is laser-focused on getting to the other side of the pandemic—and being able to send your children to school, being able to spend time again with loved ones—but there’s so much between now and then. We have hope, and the vaccine is important, but we can’t lose sight of the other things the President-elect has asked us all to commit to: at least 100 days of mask-wearing, and all the other public health practices that we have in our toolkit, like not yet gathering in large crowds. We know it’s a sacrifice, and we know people are tired of it. But we see what’s happening in California. Our health care systems are just stretched too thin. And this is not just a matter of beds and meds—it’s people. These are my colleagues, who are working tirelessly, who are exhausted, who we’re not honoring, quite frankly, when we don’t wear a mask.

So we’re thinking about a lot of things heading into these last couple of weeks before there’s a new federal administration, and trying to listen attentively to many stakeholders, including partners at the state and local levels and tribal communities, who have really been on the front lines.

So once January 20th comes and you become chair of President Biden’s COVID-19 equity task force, what specifically will you be focusing on? What will your job entail?

One of the priorities is getting from vaccines to vaccination, and having a strategy where everyone in our country who wants a vaccine can get one, with equitable and timely access. That’s going to be a really high priority for us in the first 100 days. We need a whole-of-government approach to this [pandemic], and we have to prioritize both our response and our recovery, with things like PPE, testing, and vaccines.

But this isn’t a task force that will exist forever. I’m hoping we work ourselves out of a job pretty quickly. All of the work relating to sustaining equity in the long term won’t be over; but when COVID-19 starts to feel like something in the rearview mirror, the task force will be able to transform to something else.

Black people and communities of color have some justifiable skepticism of vaccines, after a long history of medical mistreatment and ongoing lived experiences of systemic racism in health care today. How are you thinking about outreach and equitable distribution of the vaccine to wary and historically underserved communities?

It’s important for us to acknowledge why there’s this hesitancy. People are going to be skeptical of vaccines, particularly many in communities where there is a not-long-ago history of experimentation, and where there are daily, contemporary reminders of differential status and access. But not every person or group that’s skeptical of vaccines has their skepticism rooted in the same things, not even for every person of color who’s skeptical. So we need to be thinking about targeted messaging; different people have different questions and motivations, and our response is not one-size-fits-all in terms of the information people need.

The messenger providing this information is very important. By and large, we trust health care professionals, local leaders, community leaders; young folks might trust different kinds of influencers. We also have to make sure that trusted messengers have the answers to the questions they will be asked, rather than being silent because they don’t know the answers—because somebody will be happy to fill that void with misinformation.

What keeps me up at night is misinformation and disinformation, and just knowing how fast it’s moving. I wouldn’t have predicted that in the throes of a national pandemic, where every day we’re setting a grim milestone worse than the day before, there would be actors pushing intentional misinformation, often targeted at the very groups that are suffering the greatest.

You’ve focused on health equity for most of your career. In this past year, between the horrific statistics about the pandemic’s disproportionate toll on people of color and some high-profile individual tragedies like Dr. Susan Moore’s death, have you seen a fundamental shift in the level of public awareness about the racist disparities in health and health care, and the solutions that are needed?

Listen, for those of us who’ve been working in the health equity space, we could draw the maps on day one of where this [pandemic] was going to be the hardest-felt – what neighborhoods, what zip codes. They often overlap with redlining maps. But there were so many others who couldn’t. We started with different levels of awareness at the beginning of the pandemic, about the legacy of systemic, structural racism and inequality and how that often manifests by place and by race in this country. It does feel different, now. There is this awareness, in some an awakening, and in everybody a reckoning.

But what is so difficult for me as a physician and as a researcher is just how hyper-politicized everything has been. It’s mind boggling. I just don’t understand how a mask has become a political expression. One of our great tragedies of the pandemic is just how eroded many Americans’ trust is—in not just government and institutions, but in science. I’m hoping that, as part of the new normal, that we really restore trust in terms of what the role of government is, and also fundamentally in science and evidence and data.

Because I’m a researcher, I’m such a nerd. We go where we have data—and I don’t think it’s hyperbolic to say that the data we collect signals all our societal value. So I worry about, who is invisible in the data? Who doesn’t have a champion?

It took so long for us to get data out of tribal communities, and to understand the impact of the suffering among Native and Indigenous people. We still have spotty data on what happens in our carceral system. If data is a metric of value, then we signal who we value, and who we don’t, by who gets counted and who doesn’t. We need to collect those data—not just to find disparity, but so we can target our actions and get to the outcomes that we want.

There are so many different pieces to providing more equitable health care to all—the need to combat racism within the medical establishment, the impact of policymakers, the socioeconomic factors like access to education and housing—but what is the role for business? What sorts of things should for-profit companies be doing to work towards greater health equity?

There is a lot that can be done in the business community, and I’m inspired by just how many folks are raising their hands. I’m hearing from folks who say, “Our boardroom feels different now. We’re having different conversations.” For businesses that are in health care, how can we revisit incentives for wellness and health for more folks? I want that to be contagious; for C-suite and board conversations to really be driven by self-interrogation and for people to have an understanding that working towards advancing equity is good for business and good for the bottom line. You know, it’s good to have a healthy workforce.

We didn’t get to this place of deep embedded inequity overnight, so we won’t disrupt it all overnight. And instead of thinking that this is a question only for the government to think about, or for nonprofits and philanthropy—no, this is everybody’s work. But it is in everybody’s interest to do that work. And I think it is being undertaken in earnest in many virtual boardrooms across the country.