‘We can’t ever go to the doctor with our guard down’: Why Black women are 40% more likely to die of breast cancer 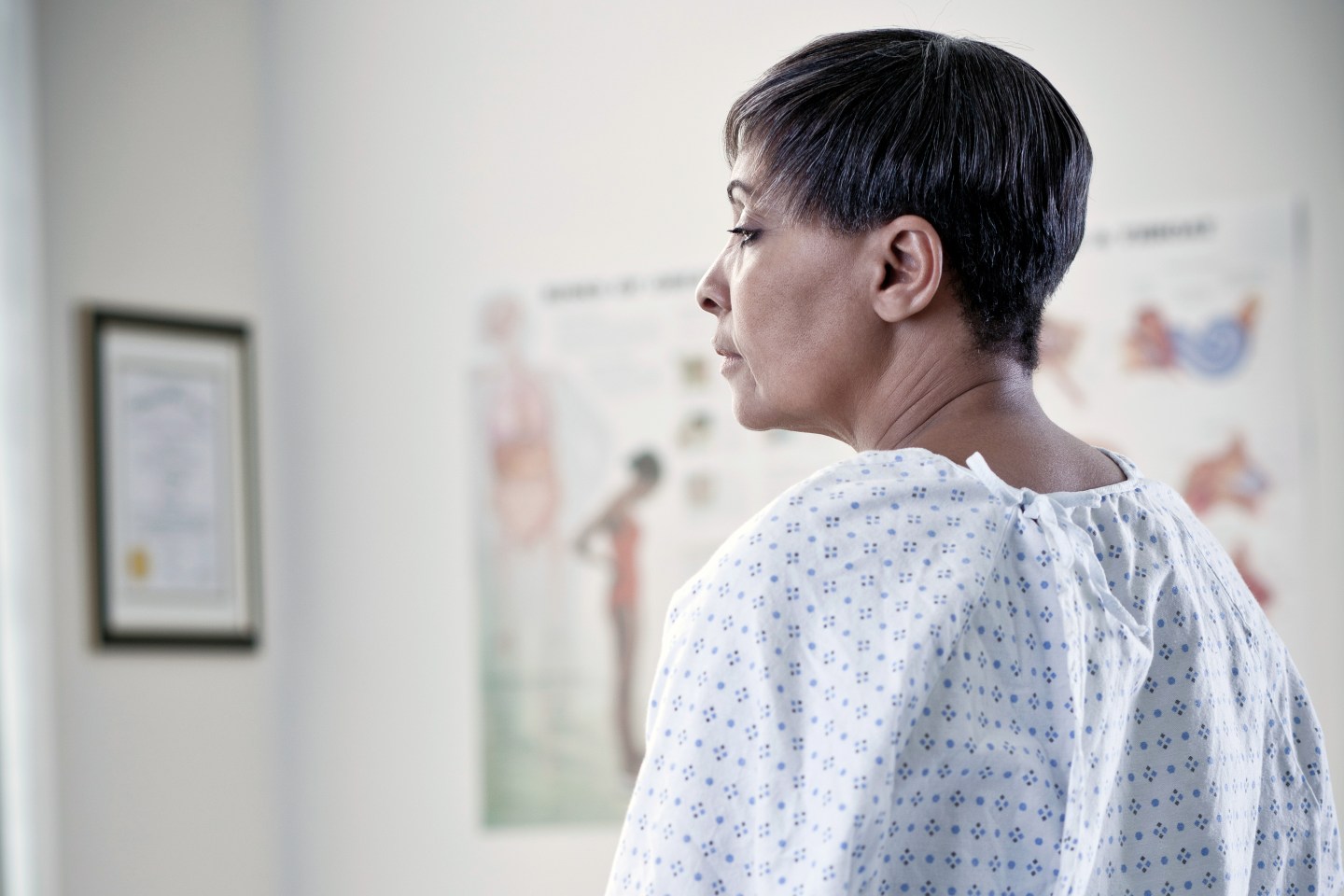 Racism kills Black Americans, and has long before COVID-19. But its toxic combination with sexism has particularly vast and disastrous consequences for the health of Black women.

While Black people in the U.S. are dying from the COVID-19 pandemic at a disproportionately high rate, this national health crisis underlines an even grimmer status quo: Black Americans are also much more likely to die from far more common and long-standing health problems every day. Black women are at particularly high risk for heart disease and strokes, and are at least three times as likely to die as a result of childbirth as white women, contributing to the overall alarmingly high maternal mortality rate in the United States.

Then there are the shocking statistics around breast cancer, which affects one in every eight women and is the most common non-skin cancer affecting women. Black women are less likely to develop it—but 40% more likely to die from it than white women, according to the U.S. Centers for Disease Control and Prevention.

The reasons behind this awful disparity are wide-ranging, and include systemic problems both within health care and far beyond it. Now the disproportionately high toll of COVID-19 on the Black population in the U.S. and the simultaneous national reckoning over racism are drawing new attention to the racial inequities hurting Black women—and amplifying the voices of doctors, scientists, and public health experts who have long sounded the alarm.

“Black women, like all women across races, have a very hard time being taken seriously about their own bodies, due to a pervasive sexism,” says Tina Sacks, an assistant professor at UC Berkeley’s School of Social Welfare and the author of Invisible Visits: Black Middle-Class Women in the American Healthcare System. “When you compound that with racism, you have a particularly toxic mixture that Black women are facing.”

This toxic combination is visible at every step of a Black woman’s experience as she develops breast cancer, from the preventive care she is less likely to receive to the treatments that are less available to her. Black women are at higher risk for a particularly aggressive type of “triple-negative” breast cancer, yet they are still largely omitted from clinical trials of drugs that treat the disease. And that’s not even considering the more sweeping problems of prejudice and discrimination as Black women seek care for all kinds of health problems.

“People often attribute these disparities to individual causes—and really what you have to do is look at the structural causes,” says Laurie Zephyrin, a physician and former director of reproductive health at the U.S. Department of Veterans Affairs, who’s now the vice president of delivery system reform at the Commonwealth Fund. “This pandemic has made more visible the inequities that have existed, for everyone to see.”

Lack of options, lack of study

When it comes to treating breast cancer, Black women are underserved at almost every step of treatment—including before they are diagnosed.

Even though Black women are at particularly high risk of developing triple-negative breast cancer—which is also more likely to return after treatment—they are less likely than white women to undergo genetic screening to assess their cancer risk or to have preventive treatments, including mastectomies and reconstructive surgeries with breast implants. A 2018 Ohio State University study of women at high risk of breast cancer found that, “compared to their white counterparts, African American women faced additional burdens at every step along the risk-management journey.”

Some studies also show that Black women may have more delays in following up on an abnormal mammogram, or less access to higher-quality care, she adds: “When it comes to access to chemotherapy for aggressive cancers, or access to the latest treatment, there are disparities that map that as well.”

As a small silver lining, Black women make up a relatively small percentage of those exposed to some of the dangers associated with breast implants, as I recently investigated for Fortune. White women make up more than 70% of all breast-implant patients, including for reconstructive surgeries, according to the American Society of Plastic Surgeons. Only 13% of patients who get “reconstructive” implant surgery are Black (in line with Black Americans’ share of the overall population), and only 8% of those women who choose implants for cosmetic reasons are Black.

But the relatively low rates at which Black women access these procedures are replicated across many other stages of breast cancer prevention and treatment. “Black women are still not getting state-of-the-art care for their breast cancer,” says Julie Palmer, the director of Boston University’s Slone Epidemiology Center and one of the founders of the Black Women’s Health Study, a biennial survey of 59,000 Black women that began in 1995.

Palmer blames socioeconomic factors as well as problems within the health care system for the disparities in breast cancer mortality rates. Black women who are lower-income and uninsured may not be able to “afford the oral endocrine medications that greatly improve the prognosis for women” with some types of breast cancer, she writes in an email to Fortune.

“Some of the triple-negative breast cancers occur at young ages, before the recommended age for mammographic screening,” Palmer adds. “By the time the cancer is found, it may be too late for effective treatment.”

Black women also may delay seeking treatment for cancer, “possibly due to past experiences of racism in the health care system,” Palmer says, adding that “clinical trials for treatments have underrepresented Black women.”

That’s an understatement. Women of all races could be legally omitted from government-funded clinical trials before 1993, and are still often underrepresented in most research studies of conditions that affect them. Pregnancy and menstrual cycles are thought to “complicate” the results of trials that are mostly conducted on white men, who are seen as the “norm.”

This can obviously backfire. In 2013, the U.S. Food and Drug Administration sharply cut its recommended dosages of Ambien for women, after years of complaints about grogginess and falling asleep while driving, when follow-up tests showed that women metabolized the active ingredient in sleeping aids much more slowly than men.

When it comes to clinical trials funded by pharmaceutical companies, “the FDA encourages but does not require diversity in clinical trials,” says Diana Zuckerman, a scientist and president of the National Center for Health Research. “Worse, the agency frequently approves drugs and devices for all adults, even if they were primarily studied on white adults.”

Between 1993 and 2013, “less than 2% of cancer studies have included enough racial and ethnic group participants to report relevant results,” Jane L. Delgado of the National Alliance for Hispanic Health and Edward Abrahams of the Personalized Medicine Coalition wrote in a Stat News op-ed last year.

The underrepresentation of Black women in studies of treatments that affect them is “a significant issue,” says Zephyrin. “There needs to be intentional efforts to recruit women of color in clinical trials.”

The FDA sets guidance for but does not run the clinical trials conducted by pharmaceutical companies. Agency spokesman Nathan Arnold tells Fortune the FDA has made various efforts, over the past few decades, to encourage clinical trials to enroll more diverse participants, “primarily through broadening eligibility criteria.

“Despite these efforts, challenges to participation in clinical trials remain,” he says, “and certain groups continue to be unnecessarily underrepresented in many clinical trials.”

‘Credible witnesses’ at the doctor’s office

Part of the conversation around poor health care for Black people also often involves socioeconomic status: Black and Latino people tend to be lower-income, are less insured, and live in areas with less access to high-quality health care. These conditions form some of the inequities that are often called the “social determinants of health,” and that are contributing to the high mortality rates of Black people from COVID-19.

“The pandemic exposed racial inequities that have always been there, and there is a lot of work for health care to do,” says Uché Blackstock, a physician and the founder and CEO of Advancing Health Equity, a consulting firm for health care organizations. “But if we want to have a holistic approach, it’s also about the social determinants of health: ensuring that we have adequate housing and that Black community members are able to purchase property and to accumulate wealth; investing in schools; and investing in employment opportunities.”

Then there is the stress and very real physical damage that comes from “weathering,” the term coined by public health researcher Arline Geronimus to describe the physical effects of dealing, every day, with the weight of socioeconomic disadvantages, discrimination, and racism.

“Physical and psychosocial stresses, plus the stress of discrimination, plus other race-related stresses that we don’t normally think about, like the stress of police violence—the accumulation of these stressful life experiences leads to physiological dysregulation, which adversely impacts health,” says David R. Williams, a public health expert and Harvard University professor, who has coauthored a study on the social context for Black women’s elevated risks of breast cancer.

“COVID has functioned as a magnifying glass that has allowed Americans to see a problem that has existed for more than 100 years, or longer,” he adds.

Now he and other public health experts express cautious optimism about the changes they hope to see within medical and health care institutions in the wake of the current reckoning over racism, and the weeks of protests over the police killing of George Floyd.

“Over the years, we’ve known about health inequities, we’ve known about stress in communities of color, and it’s come to a point where people are frustrated by it all,” says Marilyn Fraser, a medical doctor and the CEO of the Arthur Ashe Institute for Urban Health. “It’s kind of like being in a pressure cooker—and needing the lid to open up.”

But the pervasive and entrenched nature of these problems, and how they affect the health of Black women in particular, will require extensive and multifaceted solutions. As Berkeley’s Tina Sacks discovered in researching her book on the health care experiences of college-educated and higher-income Black women, better socioeconomic status alone doesn’t eliminate many of the racial inequities in health care.

When the women she studied walked into the doctor’s office, “the most salient part of their identity was being a Black woman,” she says. “They felt that they had to walk into the health care encounter presenting themselves in a particular way, and having done all of this research beforehand. They had to sell themselves as a credible witness to what was going on with them, so the doctor would take them seriously.”

Sacks, who is Black and who previously worked at the CDC, says that she and her fellow Black female colleagues there eventually realized that they shared a particular strategy for personal appointments with their doctors: They would wear their CDC badges into the doctors’ offices “and keep them on for as long as we could before disrobing,” she says.

The CDC badges would “signal that we probably were familiar with medical and health terminologies, and that we had what many Black people jokingly refer to as ‘a good government job,’ with good government insurance,” Sacks recalls. “We can’t ever go to the doctor with our guard down.”