What to watch in theaters or stream at home this weekend 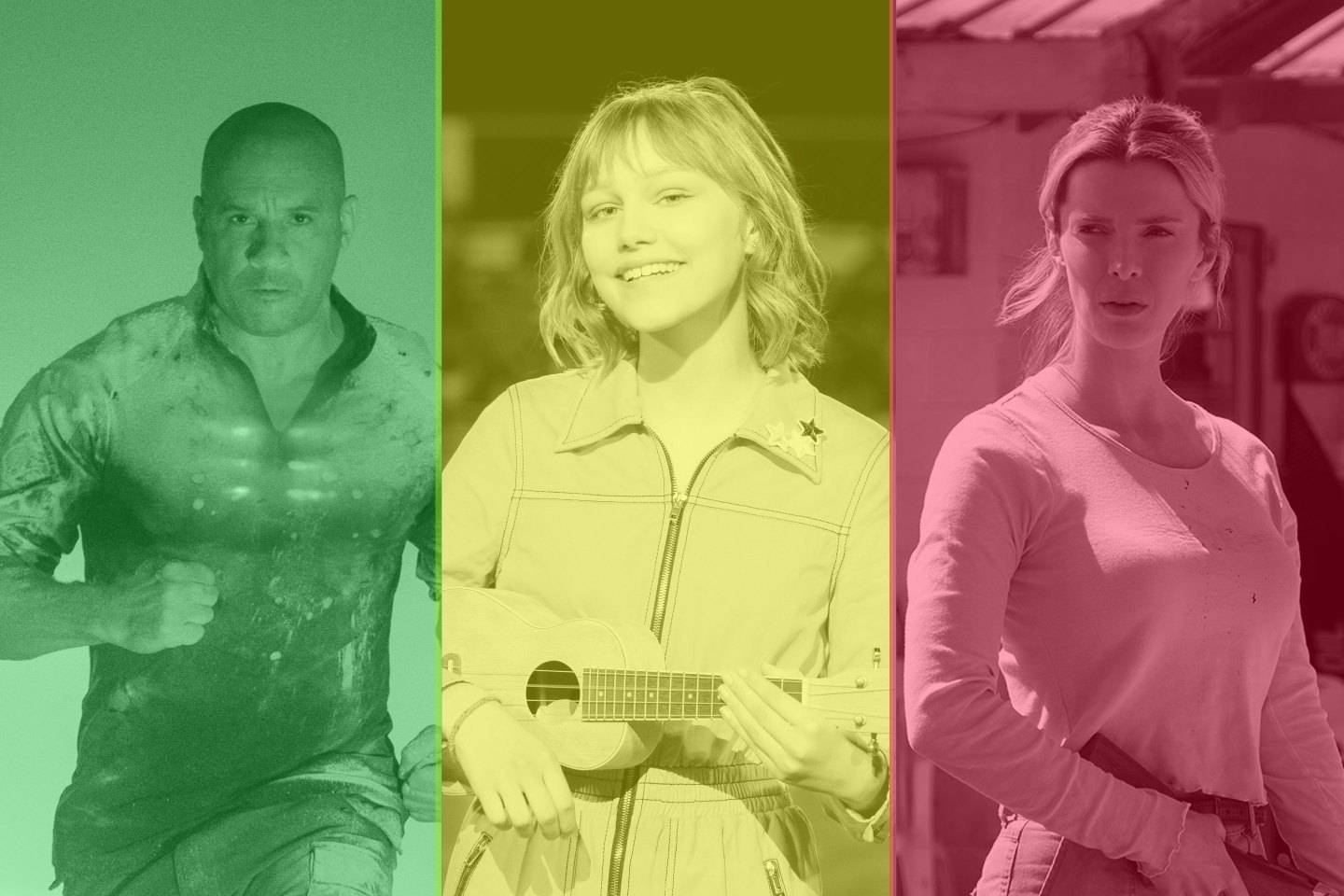 SEE IT: ‘Bloodshot’ (In theaters)

Vin Diesel is a movie star too incalculably massive for the meager blockbuster vehicles that seek so foolishly to contain him.

One has to credit Bloodshot, his latest franchise effort (bringing him to a potentially unrivaled five, if you count his voice role as a monosyllabic tree-thing in the Marvel movies), for acknowledging that Diesel exerts the kind of gravitational pull typically reserved only for black holes and planetary bodies. He will never play a convincing weakling, nor can you imagine him backing down from a single, solitary fight; with a voice like a cement truck and biceps the menace of sleeves worldwide, Diesel is about as believably immortal an action star as we have. All of this makes him exceptionally great casting for Bloodshot, whose titular hero suggests a comic-book update of Universal Soldier. Diesel’s unsubtly named Ray Garrison is an ace military operative, the best in his field, who always gets the bad guy and returns to romance his loving wife (Talulah Riley)—that is, until work follows him home and a sneering baddie (Toby Kebbell, who really hasn’t thought this through) rather brutally puts an end to his marital bliss.

Waking up in a laboratory run by a doctor (Guy Pearce) with a robotic arm, Ray soon finds that, for a man of his legendary abilities, death was a less-than-permanent state. He’s been rebuilt using nanotechnology, made faster and stronger than ever with the help of microscopic nanites in his bloodstream that give him the ability to instantly regenerate, even after his body sustains catastrophic damage. As the doc explains, he’s been rescued from the morgue to join a group of similarly bionic super-soldiers, including Sam Heughan as a paraplegic outfitted with steel, razor-blade legs and Eiza Gonzalez as a Marine diver engineered to breathe through a vent in her clavicle.

But as Bloodshot soon reveals, this isn’t the story of a team coming together you might expect. As Ray pursues the man he believes is responsible for killing his wife, the story (scripted by the unlikely duo of Truth or Dare‘s Jeff Wadlow and Arrival‘s Eric Heisserer) twists with surprising cleverness into a maze of augmented realities and implanted memories, with Ray coming to question the nature of his new existence.

Bloodshot is very much Diesel’s RoboCop, concerned with bodily autonomy and what few forms of freedom can remain to the individual in a world governed by shadowy corporations and massive technological oversight. It’s also a massively silly popcorn flick in which Diesel’s superhero-in-the-making lands punches that break buildings and lays waste to armies of unfortunate mercenaries, nary a recognizable human emotion flickering across his granite features. The film can be summed up by its best sequence, a face-off in a darkened highway tunnel that’s lit by crimson flares and awash in flour (from an overturned truck) that falls heavy like January snow. Ray strides authoritatively through the chaos, scowling, motor-driven and nigh invincible as bullets rip ineffectually past and through him. It’s categorically cool to watch, deeply clichéd, and exactly the kind of giddy action-movie moment that’s kept Diesel’s career fueled thus far.

Stargirl is aptly named. At its center is the young actress Grace VanderWaal, whose irresistibly high-wattage smile and melodic abilities are the only special effect this coming-of-age story needs to radiate with a kindness and light that couldn’t be more welcome right now.

Her Susan “Stargirl” Caraway, a new arrival at Mica High School, wears rainbow-colored outfits, strums a ukulele, and vibrates with an infectious warmth that soon endears her to classmates, including young Leo (Graham Verchere). Stargirl’s a breath of fresh air, a break from small-town monotony, but she’s more than that a true original, out to brighten the world around her by being her most authentic and colorful self. VanderWaal captures the character’s innate sweetness with a charm that, almost magically, never veers into cloying sentimentality.

To Leo, who’s mourning the loss of his father and surviving high school by laying low, Stargirl’s a revelation—especially when she takes an interest in him, serenading him on his birthday in the cafeteria. The two grow close, and Leo bears witness to a kind of spell Stargirl casts on the school, especially at football games, where she brightens the cheer section and lifts the team’s spirits with sprightly, angelic renditions of songs like the Beach Boys’ “Be True to Your School” and The Go-Go’s “We Got the Beat.”

The film adaptation of Jerry Spinelli’s two-decade-old children’s novel was cowritten and directed by Julia Hart, whose debut Fast Color was the best superhero movie you didn’t see last year. Here, her triumph is partly visual, in the naked adoration with which she captures the sun-baked Arizona setting and makes maroon and gold pop off the screen at those football match scenes and elsewhere. But it’s also in the deceptively simple ways she centers these characters, letting their interactions—curious, open, warm, with the stirrings of young romance—play out with a tentative, soft-spoken languor that rings true.

SKIP: ‘The Hunt’ (In theaters)

However improbably, there existed a few weeks last summer when The Hunt was the biggest movie in the world, courtesy of our reliably incensed tweeter-in-chief.

When trailers for the Blumhouse horror-satire first began making the rounds, they teed up something like The Purge crossed with The Most Dangerous Game, a genre thriller in which the rich hunted the poor for sport on a cordoned-off reservation. Only, The Hunt added a hot-button political dimension to all its us-versus-them bloodletting; in addition to being divided by social standing, the hunters and the hunted were seen to be split along partisan lines, with “elites” bearing arms against “deplorables” on the lam.

The outrage was explosive, with Fox News claiming the film (which had not yet been screened) advocated violence against Trump supporters and the president himself weighing in to decry what he saw as Hollywood stirring up chaos and engaging in racist rhetoric. (That the one-percenters hunting for sport were quite obviously the bad guys was one detail swiftly lost amid the punditry.) The release was postponed, with some fearing the film would sit on a shelf forever, until Universal and Blumhouse reoriented to embrace the controversy, teasing a “film they don’t want you to see” and plotting out a new date in March.

So, as The Hunt finally hits theaters, it’s fair to say that it’s carrying with it a significant amount of baggage—as well as to note any exploitation filmmakers worth their salt would be delighted by this series of events. But as far as provocations go, the biggest problem with The Hunt—irony of ironies—turns out to be that it’s a pretty empty one, far from the inflammatory work of agitprop neo-cons assumed it would be and even further from the biting class satire the rest of us had hoped for.

Instead, director Craig Zobel—along with writers Damon Lindelof and Nick Cuse—has delivered a political satire that’s full of contempt for both sides but conspicuously absent any ideological convictions of its own. Chalk that up to a script that would rather leer at our current social predicaments than engage with them critically (i.e. in the way of all worthy satire).

Through the elites, white guilt is at least recognized as the cancer it is and shown metastasized; the only time these NPR-donating, lily-white wokesters lay down their guns is to chide each other on being politically incorrect and to hand-wring about whether it’s more problematic to include a person of color in their hunt, or exclude them for not being white. And on the “deplorables'” side, characters gleefully tout QAnon-style conspiracy theories and downplay talk of global warming; those not cast as trailer trash are at least dinged for being woefully uneducated. But as these groups go to war, with a better-than-this Betty Gilpin caught in the middle as our audience surrogate (an eminently likable cross between Clint Eastwood’s Dirty Harry and Uma Thurman’s The Bride), one wishes The Hunt seemed less self-satisfied with taking cheap shots.

One comparison point is Joker, notably another film accused before its release of inspiring violence through depicting it. As with when it was said then, such accusations are baseless, reductive, and ultimately harmful to the cinema’s artistic health; no piece of media can or should be held wholly responsible for the actions of those who consume it. What Joker and The Hunt do have in common, however, is a baseline cowardice, a desire to be all things to all people, to appeal to the very people it purports to critique, that deflates any tangible point the film might’ve made. Caricature is the name of the game here, and it’s played at such a deafening volume that there’s little chance any of the film’s intended targets will see themselves in the characters. What’s left is consequently pointless, a film claiming to speak to our current moment without saying much of anything, that delivers slaps on the wrist where it feints at drawing blood. In that, it admittedly does make for a pretty fascinating facsimile for being on social media these days, surrounded by snark and fury signifying nothing. A sharp-witted political satire, it is not. But call it Twitter eggs-ploitation cinema, and you’re getting more in range.

The best of the rest:

In limited release, Never Rarely Sometimes Always shines a light on the issue of abortion in America by centering the story of one teenager’s journey from Pennsylvania to New York, where she hopes to obtain one. Made with compassion and grace by writer-director Eliza Hittman, it’s an important film most through that narrow focus, which unwaveringly foregrounds the perspective of young Autumn (first-time actor Sidney Flanigan) as she and her cousin encounter all kinds of obstacles, structural and specific, en route to the clinic. A message movie, this is not; Hittman’s too smart to preach, and she’s sensitive to the ways in which silence is often the only language left for women soldiering on against systems designed to attack their voices and volition. Never Rarely Sometimes Always feels uniquely of this political moment, gently but no less devastatingly articulate about the ways all of us are complicit in upholding practices and mentalities that harm the most vulnerable among us.

—Don Cheadle on Black Monday, Wall Street in the Trump era, and hope about the climate change fight
—How Netflix’s Lost Girls upends the conventions of serial killer movies
—Heartbroken SXSW filmmakers look for alternatives after coronavirus cancellation
—Diao Yinan discusses The Wild Goose Lake, his Chinese motorcycle noir
—How coronavirus is affecting the global concert industry, including SXSW and Coachella
Follow Fortune on Flipboard to stay up-to-date on the latest news and analysis.