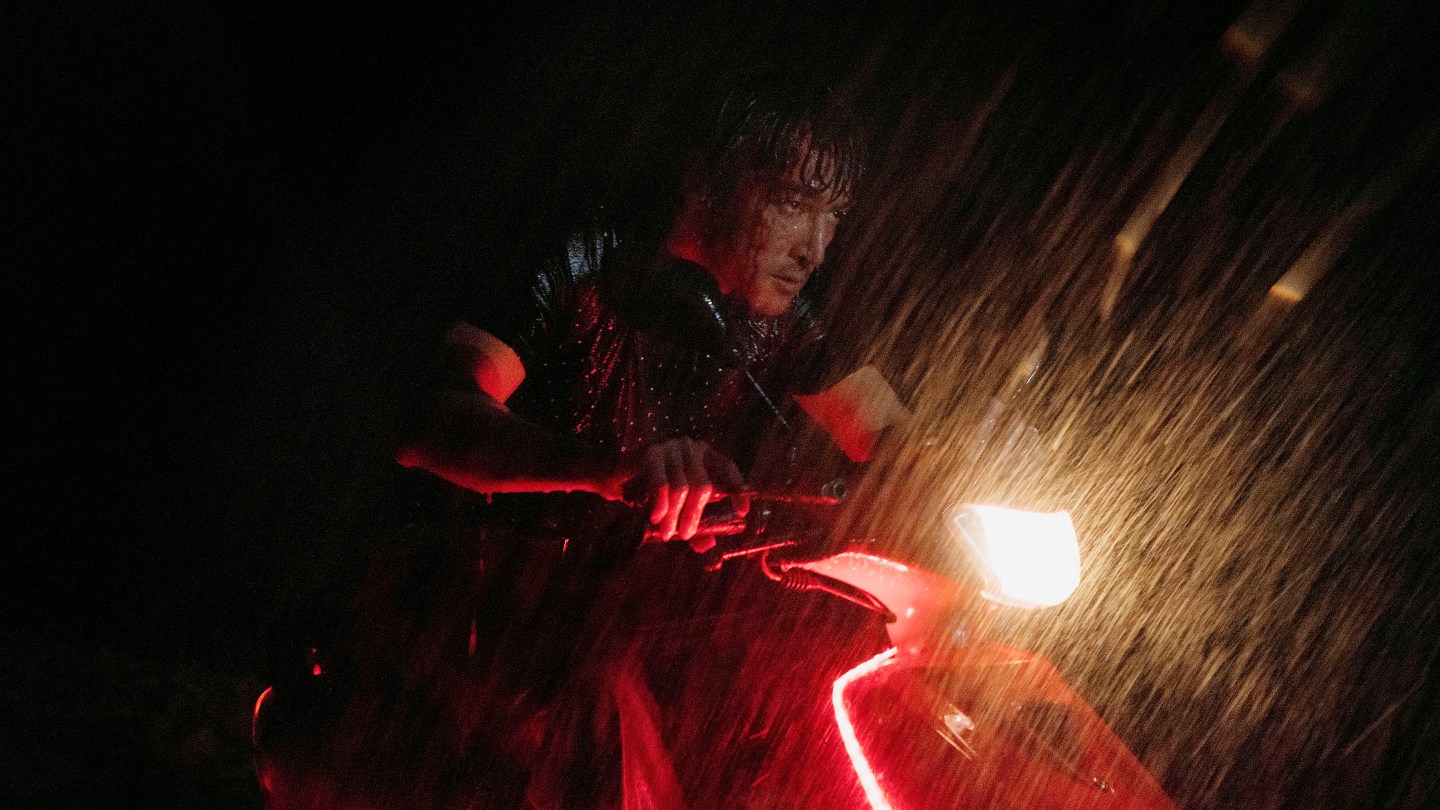 Set in and around Wuhan, the capital of the country’s bustling Hubei province (currently quarantined amid the coronavirus outbreak), the film focuses on the corruption and inequity of life just beyond China’s towering megacities. Diao, best known for directing 2014’s Black Coal, Thin Ice (which won its year’s Berlinale), is marvelously skilled at telling distinctly Chinese stories—of economic poverty and quiet lawlessness, heavy-handed police and amoral civilians just scraping by—in the language of noir.

His latest follows a small-time gangster, Zhou Zenong (Hu Ge), who’s forced into hiding after inadvertently killing a police officer in the process of navigating a turf war between rival gangs of motorcycle thieves. Struggling to fend off both law enforcement and a more ruthless array of mobsters out for blood, he eventually intersects with Liu Aiai (Gwei Lun-mei), a sex worker with mysterious motivations of her own. Together, they hatch a convoluted scheme through which he can discreetly collect the bounty on his own head, even as enemies led by police captain Liu (Liao Fan) close in from every direction. It’s a vibrant, labyrinthine story in which every perfectly composed sequence—police storming a complex with brutal intent, a nocturnal motorcycle chase down neon-lit backroads, a public dance in which light-up sneakers gleam through the night until they’re flecked with blood—draws the audience deeper into its surreal, heightened atmosphere.

A massive hit upon its release in China, The Wild Goose Lake made its way along the international festival circuit this past year—including a stop at the New York Film Festival last fall, where Diao and a translator sat for an interview with Fortune. Currently screening at New York’s Film Forum, The Wild Goose Lake is rolling out in U.S. theaters across March and will hit VOD shortly thereafter.

In bringing The Wild Goose Lake along the festival circuit, what differences have you observed between American and European audiences in terms of their reactions to this Chinese noir?

The New York audience is very different from the Cannes audience. At Cannes, they tend to take it all very seriously in terms of how to offer critiques, how to see the problems of the narrative and structure. In New York, they tend to be more relaxed. They’re cinephiles, and they love films. They immerse themselves into them and react in a lively manner. I’ve tallied, and there are maybe 15 moments in the movie where the New York audience laughs out loud, two or three where people are really shocked and taken aback by the graphic details of the imagery, and two or three instances where they’re visibly engrossed by not only the mood but the plotlines in the story.

Hu (left) and Gwei Lun-mei as Liu Aiai (right) in “The Wild Goose Lake.” “This film is not so much about narrative meanings and much more about actions and movements,” says Diao of his film.
Film Movement

The film balances violence and humor, humanity and darkness, and it’s all shot through in such a visually gorgeous manner. What was your original vision of The Wild Goose Lake, and how did you work to merge those elements together on screen?

To me, the original idea was, “How can I capture characters and story using pure filmmaking languages, in terms of imagery and vocabulary?” I wanted to resort to actions moreso than dialogue and words, because I do think we as human beings—and especially these characters—are the sum of our actions. I wanted to capture those actions in a vivid way and in doing so capture the quality of what these characters embody. From there, I could tease out their humor and humanity.

Narratively, I really wanted to stray from conventional Hollywood structures, which tend to be very polished and also linear in terms of framework. They want to make sure the audience “gets it,” immediately, without any difficulty in decoding the film. In order to capture a contemporary feel [to the noir genre,] I needed to fragment it, to fracture the narrative structure in a way that I was creating certain barriers, hurdles, and challenges for audiences. I force them to be part of that process of interpreting, decoding what they’re looking at, rather than just passively looking at this dogma being preached onto the audience… I wanted to create challenges so the audience will be forced to participate.

Film noir tends to explore these archetypes in terms of character—the gangster, the cop, the femme fatale. How did you select the kind of lead character you wanted to have a role in your reinvention of the subgenre?

The themes of this particular film can be boiled down to the character of Zhou Zenong and how he, just like everyone else, wishes to foresee his own death. He thinks about death, how he’s going to die. In this case, he questions, “How am I going to die in a way I have full control of?” This creates some sense of aesthetic, his [inevitable] dying becoming a way to show how he’d been escaping from his previous life, his ex-wife, his family, and then—because of this chance encounter and also the killing of the cop—this chain of events that’s initiated. He realizes that he can design or plan his death in a way that might somehow redeem him and give meaning to his life.

It’s fascinating how that battle plays out in the film, as Zenong runs from the cops but also struggles to escape his own senses of guilt and responsibility. The Wild Goose Lake becomes beautifully abstract in places, seeming more to wash over you than it does to adhere to a straightforward narrative. How did you craft aesthetics that would match and mirror your intentions as a storyteller?

We wanted to narrow in on the actions and gestures of the characters, because I believe those actions really embody what’s going on within them emotionally and psychologically. If you look at the Kabuki theatre in Japan, it’s not so much about the narrative or plot lines. We know those stories well, by heart, but when we see those shows again and again, it’s to see how each actor and actress onstage uses their body to tell the story in such an abstract way, whether it’s the pitch of their voice or the way they move their fingers and their bodies. It’s the purest form of expression and abstraction, to somehow tease out what’s going on in one’s inner soul. This film is not so much about narrative meanings and much more about actions and movements.

Hu (back left) in a scene from “The Wild Goose Lake.” Diao says the film’s atmosphere and characters “share this idea of what people do in these gray, dystopian areas.”
Film Movement

The Wild Goose Lake, within Wuhan, reimagines that space as so belonging to the noir subgenre, with all its rain-slicked streets and dark alleyways. Can you tell me about crafting that setting?

The other aspect of this ideal abstraction, the atmosphere, is very much about the space that has been selected. In this formal way of thinking about city planning, you have an ideal of what an urban society means. There’s this almost utopia image of what it means to live in urban contemporary cities. Beneath that, or on the peripheral areas of this utopia space, you also have these dystopian spaces or locations. That’s very prevalent in contemporary Chinese society, when you’re somewhere around these suburban areas, entering development zones and parks by the highways, bars and sleazy hotels in suburban towns. Those are spaces that can become very mysterious, and they’re also the space and location of much controversy—the gray area between what’s legal and illegal, what’s right and wrong. The atmosphere and characters I wanted to create in this particular film share this idea of what people do in these gray, dystopian areas, how they actualize themselves through the actions and gestures they make.

—How coronavirus is affecting the global concert industry, including SXSW and Coachella
—China’s box office was supposed to surpass North America’s this year. Then came the coronavirus
—First Cow director Kelly Reichardt on 19th-century Oregon and bovine headshots
—Alex Garland’s Devs aims to mix quantum mechanics with ‘elegance’
—Pamela Adlon wants you to know she has your back
Follow Fortune on Flipboard to stay up-to-date on the latest news and analysis.