After the tornadoes, Nashville’s businesses reckon with loss and the future 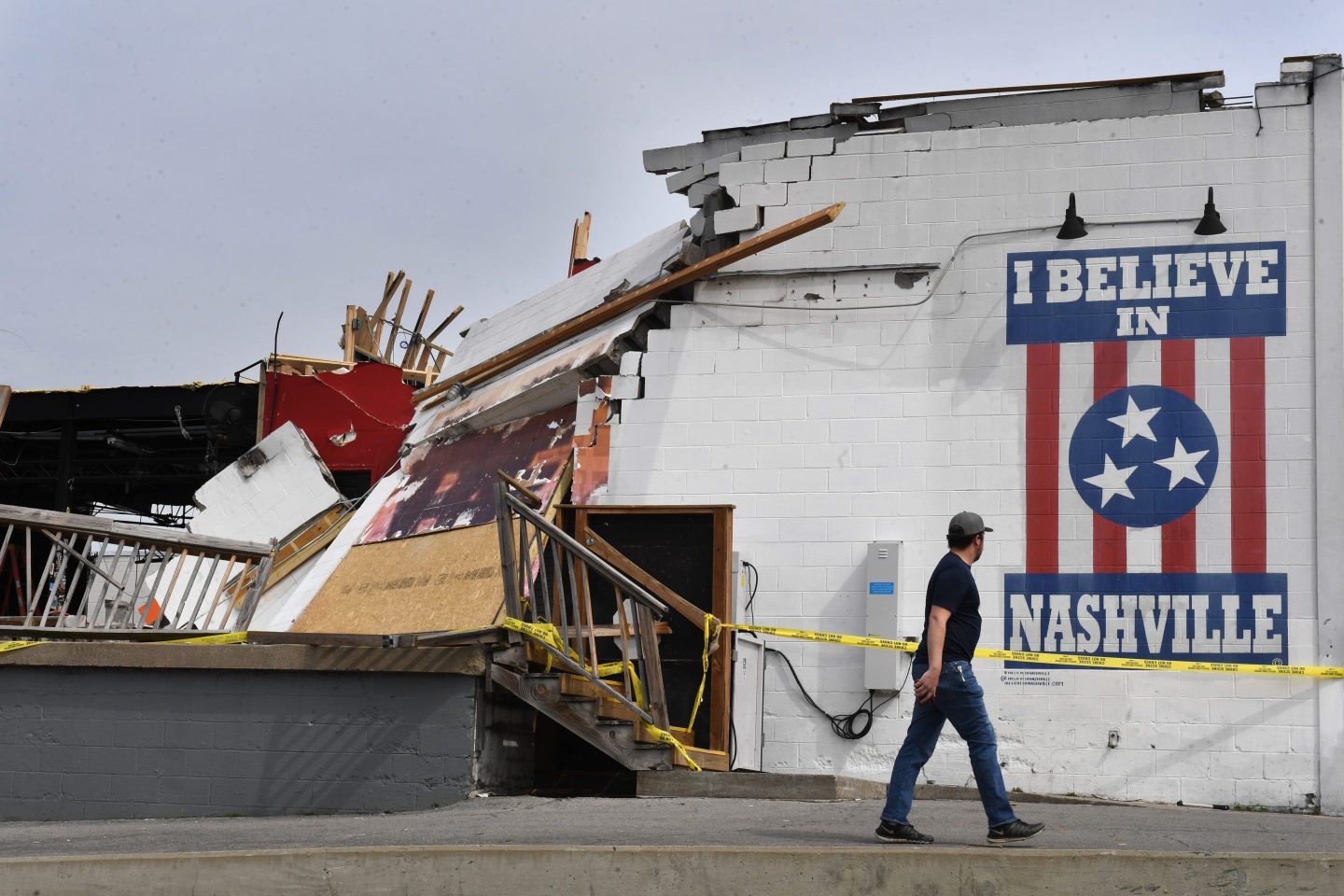 “We have a butcher, a baker, and a candlestick-maker,” said Leah Larabell, co-owner of High Garden Tea, an apothecary-style shop.

She’s not reciting a storybook rhyme. The East Nashville neighborhood where she and her husband Joel built and run their business really has that legendary trio of retailers as part of the business community that support its eclectic amalgam of residents, including many musicians and artists.

“As I go through my day, every single part of my day affects the East Nashville economy: going to the dry cleaner, getting meat at Porter Road Butcher, picking up wine at Weiss, and then going to a show at The Basement East,” adds Libby Callaway, an East Nashvillian and owner of The Callaway, a marketing and branding firm.

Larabell and Callaway were among those who awoke Tuesday morning to see that their community had been devastated by tornadoes. Four separate tornadoes hit Middle Tennessee around 1 a.m. on March 3, 2020, one of which stayed on the ground for more than 50 miles. The storms, which reached wind speeds of more than 175 m.p.h., battered the metro area, suburbs, and rural counties. Within the city, the neighborhoods hit hardest, like East Nashville, were those with concentrations of small businesses, from dry cleaners to boutiques to restaurants. At least 25 people lost their lives, with more than 400 homes and nearly 200 businesses destroyed, including the popular Basement East music venue Callaway frequents. The Weiss Liquor store is open, but lost the iconic neon sign that greeted Main Street visitors long before East Nashville had its creative cachet.

The building that houses Larabell’s business is now short several walls, its roof, and $180,000 in merchandise. Within hours of the storm, loyal customers started a GoFundMe campaign raising enough for the couple to be able to pay their 12 employees for at least two weeks while they regroup.

Nashville’s recent population growth has been well-documented; for parts of 2017 and 2018 more than 80 people moved to Music City every day. The city’s population increased from 569,000 in 2000 to 705,000 in 2020, with the greater Metro area now topping 1.75 million. But as the city has grown, the small town-nature of this neighborhood, which was hit by tornadoes in almost the exact same spot in both 1933 and 1998, has not dissipated. The losses of these businesses—whether temporary or permanent—have had both an emotional and an economic impact on its residents.

The Soda Parlor, another nearby business that suffered the wrath of the storms, was nationally known because of its owner, Olan Rogers, a YouTube comedian and the creator of TBS’s Final Space. Fans flocked for old-fashioned sundaes and custom merch, sure, but thanks to the free retro arcade games, it was somewhere local kids and parents regularly hung out after school.

As Nashville has grown and East Nashville real estate has skyrocketed, there has been hand-wringing about too many restaurants and too small of a labor pool. But as the neighborhood woke up to splintered power poles and insulation hanging from trees, it became clear that collaboration and charity trumped competition.

Hospitality is the city’s second-largest industry, by number of employees, and keeping those folks paid is essential to rebuilding, says Butch Spyridon, president and CEO, Nashville Convention & Visitors Corp.

Because Tennessee doesn’t have an income tax, the economy relies on sales tax. “It is more expensive here today than it was on Sunday,” he says of the loss of sales tax revenue.

Nashville native and Chef Jessica Benefield, owner of Two Ten Jack and The Green Pheasant, was lucky in that her restaurants were spared from the storms. She started a GoFundMe campaign with the intent of buying grocery gift cards for out-of-work chefs and waiters.

Countless restaurants offered assistance to business owners who, on a regular day, are competitors, offering to hire staff for a night or a week or a month, making shifts for extra sous chefs and servers, all the while making clear that there is no poaching going on in this tight labor market: Everyone will be welcomed to go back to their original jobs when restaurants re-open.

At other businesses, the owners literally made space, often for the competition. Some restaurants cleaned shelves in their walk-in coolers so that restaurants that lost power could store ingredients. Co-working spaces, including Collective615, a woman-only space across town and the Nashville Entrepreneur Center near downtown welcomed displaced entrepreneurs with a desk and an Internet connection. Boutiques, including Apple and Oak in East Nashville and Hey Rooster General Store in Hillsboro Village, welcomed other merchants to come sell their wares in their shops.

Mike Krajewski lost his personal-training gym, MK Fitness, and was flooded with offers of places where he could train his clients, many from gym-owners he has never met. Krajewski, who emigrated from Canada, thinks the high number of transplants in Nashville might contribute to the supportive business community. “This is a spot where we’ve chosen our family. We have chosen the people we want to be around.”

As cleanup crews work to remove debris, two neighborhood entities, CreativeMornings and Center 615, an East Nashville co-working space, teamed up to offer a less practical, but more poignant, help. They urged volunteers to drop off the sentimental, but not necessarily valuable, items found in the rubble for future re-uniting with tornado victims. Their lost-and-found bins feature photographs, stuffed animals, and handmade quilts. In true Nashville fashion, one of the first things found? A GRAMMY certificate.

—H&M wants to help other fashion houses become sustainable—for a fee
—Target’s next frontier: Convenience stores and alcohol pickup
—Coronavirus is affecting everything, even Diet Coke
—How “for women, by women” Lola views its investor’s Trump ties
—How Home Depot turned itself into a Black Friday destination