Recycling hasn’t changed in years, but America is on the cusp of a reckoning 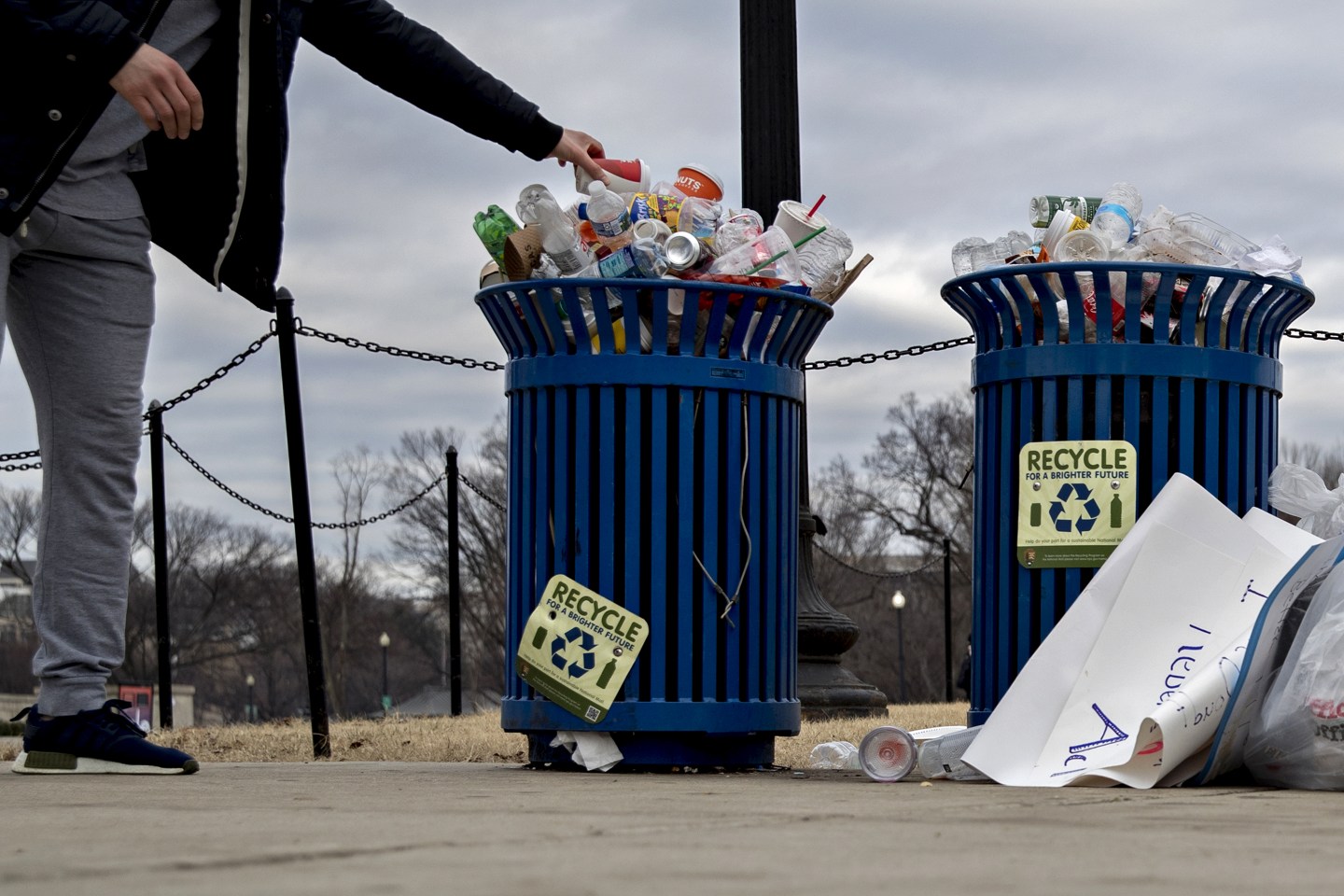 A visitor places a coffee cup into an overflowing recycle bin near the Lincoln Memorial in Washington, D.C., U.S., on Sunday, Jan. 21, 2018. The House and Senate are back in session Sunday with a federal government shutdown in its second day amid a spending-bill impasse in Congress. The House is supposed to be on recess this week, but members stayed in Washington as negotiations continue. Photographer: Andrew Harrer/Bloomberg via Getty Images
Andrew Harrer—Bloomberg via Getty Images

Since the dawn of curbside recycling some 40 years ago, millions of Americans now subscribe to the idea of recycling. That success was helped along by the advent of single-stream recycling around 2005, which allowed people to put everything in one bin rather than sorting according to material. Many U.S. communities hopped on board.

Single-stream was seen as a positive evolution: It was easier for people to do, and it cost haulers—and cities, by virtue of downstream savings—less than the previous dual- and multi-stream systems. Today, people dutifully toss their used water bottles, tuna cans, pasta sauce jars, broken-down Amazon boxes, and junk mail into the recycling bin, diverting it from the trash. Even better, some might even place their eggshells, coffee grinds, and apple cores into a composting bin.

But then someone comes along and dumps a container that still has soup, oil, or coffee in it into your blue bin. Or a glass bottle explodes upon impact inside your apartment building’s communal recycling receptacle, sending a million shards into a pile of otherwise clean paper and cardboard. This inadvertent contamination can spoil the whole batch, which in the best case scenario means it loses some of its value on the resale market. The worst case scenario? It goes to landfill.

This is a major reason why, despite the belief of 80% of Americans that recycling is important, the country still struggles with poor recycling rates. On either end of the spectrum for big cities, New York City recycles just 17% of its total waste, while San Francisco tops the country with an 80% diversion rate. Nationally, the recycling rate is just over 35%. That figure has been more or less stagnant for years, speaking to a much larger—institutional, even—problem with how the U.S. approaches recycling.

That problem was exceptionally easy to ignore for a very long time. Beginning in the 1980s, China bought a huge amount of foreign trash and recyclables. The country had ample cheap labor to sort through it to find those coveted higher-quality Western plastics, which were excellent raw materials for sandals, phones, and takeout containers. The Asian country gobbled up millions of tons of the world’s waste.

Until two years ago.

Since China enacted its National Sword policy at the start of 2018, the superpower now refuses 99% of the world’s recyclable plastic because it exceeds the new contamination threshold. Contamination is what happens when things get put into recycling that really shouldn’t be there; as it turns out, Americans love to “wish-cycle” by tossing in soiled containers and paper, lightbulbs, and other items that are not recyclable. The U.S.’s contamination rate sits at around 25%—much higher than China’s 0.5% allowance.

Other Asian countries initially picked up the slack that resulted from China’s ban. But now they don’t want to be the world’s trash can anymore, either. Malaysia recently returned 150 shipping containers’ worth of refuse to their Western countries of origin. That smuggled trash had been illegally imported by local companies, the Malaysian government said. These de facto embargoes have led to the bottoming out of recyclables markets.

In his 45 years in the waste, organics, and recyclables hauling industry, Louie Pellegrini has never seen market prices for recyclables so low. With China purchasing only clean recyclables, waste haulers are having a hard time finding new buyers.

“China was a once-in-a-lifetime deal. There’s never going to be another China,” said Pellegrini, the owner of the San Francisco Bay Area’s Alameda County Industries. “[Now] we have to learn how to deal with ourselves.”

The overwhelming majority of Americans see recycling as a righteous act. Private waste hauling companies, however, see recycling as a matter of economics. They provide the equipment, crew, and processing facilities, and they earn money by charging cities—or by charging households directly, in some cases—to get rid of waste and recycling.

They also earn revenue by handling the resale of the materials they collect and by landfilling trash. Pellegrini said he used to get a pretty penny for his recyclables; now, in some cases, he is paying to get rid of them. Glass in particular is a material that normally fetches a high price on the resale market when properly handled and transformed into cullet (the fancy name for recycled glass). Even that is being thrown out in large quantities because of contamination.

In California, where he operates, the penalties can be quite severe if a hauler were to be caught landfilling recyclables. But Pellegrini can see why some haulers would be tempted to dump recyclables in a trash heap instead.

“It is definitely cheaper to landfill it. Every time you touch it, it costs more,” he said, noting the labor it takes to sort bags of contaminated recycling.

The downturn in the recyclables market makes recycling less profitable to haulers, who now have to choose between reverting to and investing in dual- or multi-stream recycling, or continuing with the lower-value single-stream and instead landfilling contaminated materials.

Neil Seldman, a recycling expert with the Institute for Local Self-Reliance, said China’s National Sword policy could actually be one of the best things to happen to American recycling. “Until that happened, there was no incentive [to do higher-quality recycling], and people didn’t realize that single-stream systems contaminated material so much that they became worthless on the international market,” he said.

Seldman believes the U.S. recycling business is in need of a real reckoning, since recycling rates have slowed to a crawl. “We’ve been stagnant for maybe 15 years now, and the reason is that the industry is structured so that large companies control enough of the market to qualify as monopolies.”

That regional market dominance gives haulers—especially those who handle both trash and recycling—enormous leverage over cities and towns to dictate the terms of waste hauling contracts, as well as to determine their collections’ final resting places.

Scott DeFife, president of the nonprofit industry group Glass Packaging Institute, said that the fractured nature of U.S. decision-making on waste—and many public officials’ lack of basic understanding on the topic—has helped rob communities of their ability to get collective buying power.

“The level at which we [make these decisions] is hyper local compared to other countries or continents,” DeFife said. “The private sector companies who have national programs have benefited from this because no one city or county has enough market power to shape the contracts in a way that is more balanced. The market power is on the side of the large companies.”

Because of how China’s policy has affected those large hauling companies, there have been subsequent ripple effects across the U.S., hitting some areas hard. As waste haulers pass off higher costs to their customers, a few dozen communities across the U.S.—especially those that had a noncommittal relationship with recycling in the first place—have suspended or outright canceled their recycling programs, according to an exhaustive list of local and state program changes published by Waste Dive. Others have restricted the kinds of materials they’ll accept, with plastic bags and glass at the top of the recycling non grata list because they are the most likely to contaminate.

“We mainly did dual-stream recycling because we were able to get revenue from the paper, but we haven’t made any revenue from our paper for the past two years,” says Melissa Simoncini, senior environmental and regulatory coordinator for the department of public works in Concord, Mass., a 16,000-person town northwest of Boston. Concord’s hauler previously shared some of the profits of selling the town’s recycled paper, which went toward offsetting the cost of the service. She said without the Chinese market, the community was struggling to find a buyer and was just stockpiling the paper in the meantime.

For now, Concord is keeping its 22-year-old dual-stream system even though it doesn’t generate revenue, simply for the fact that it diverts waste from landfill.

Changes to China’s recycled paper market was a central reason why New York City quietly backed away from a plan to switch to single-stream recycling a few years back. The city had considered single-stream because it had hopes of increasing its participation rate, explained Kathryn Garcia, New York City’s sanitation commissioner—a move that local experts like Maggie Clarke, a chair of two committees at the Manhattan Solid Waste Advisory Board, advised against. “We gathered a lot of information from elsewhere where these communities had signed up for single-stream and then had buyers’ remorse [because of high contamination],” Clarke said.

Today in New York City, Garcia said the city is taking some steps to expand and improve education about its voluntary composting and mandatory dual-stream recycling programs, as well as extended producer responsibility policies—an approach that shifts the responsibility onto manufacturers instead of consumers—that are popular in Canada.

Even with the logistic headaches, Seldman argued that, in the long run, China’s policy could actually be a blessing in disguise because it is helping to relocalize recycling—in essence, bringing materials recovery facilities (MRFs) and paper mills back to the U.S., and pushing better recycling practices overall across the country. For instance, last year former paper mills in Oregon, Maine, and Wisconsin, along with a decommissioned MRF in Santa Fe, reopened.

When it comes to reckoning with its recycling crisis and the corporations at the heart of it, the U.S. is facing an enormous task. Still, citizens do have the power to make a change. “What I always like to say is, I’m only dealing with the end of the line,” Garcia said. “What you decide to buy today makes a huge difference on how we manage it at the end of the cycle.”

—Europe may be next in Trump’s trade war offensive
—Berlin’s ‘ghost’ airport might finally open, billions over budget and 8 years late
—The long ocean voyage that helped find the flaws in GPS
—Mysterious GPS outages are wracking the shipping industry
—Into the ‘crucible’: How the government responds when GPS goes down