First NAFTA. Then China. Europe may be next in Trump’s trade war offensive 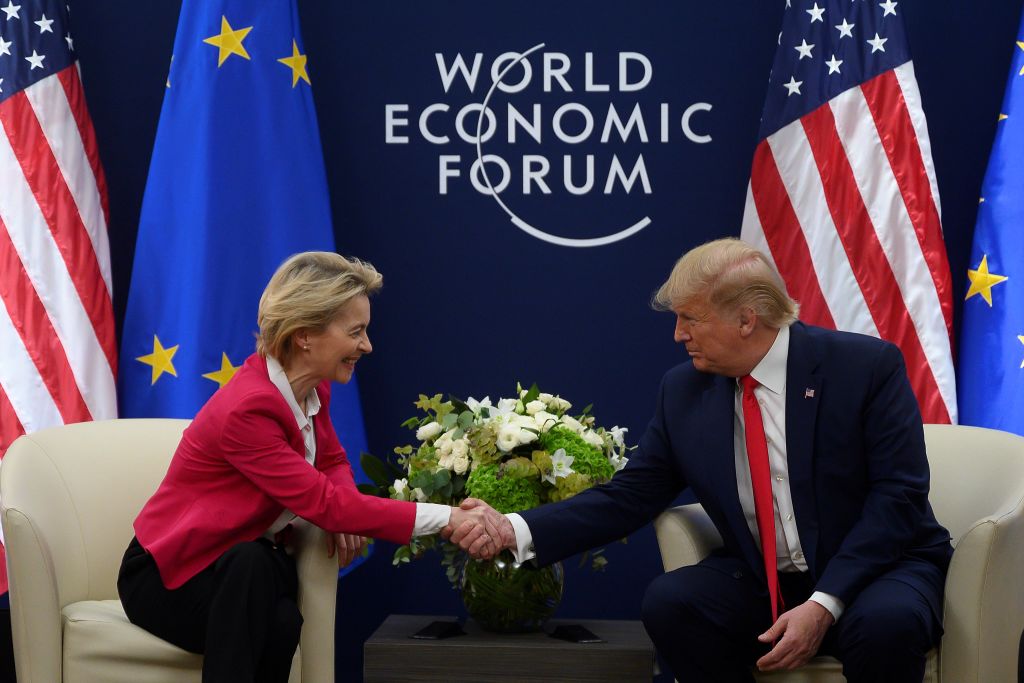 In the first three years of his presidency, Donald Trump’s abrasive trade diplomacy has yielded a tweaking of NAFTA and halted, apparently, the remorseless widening of the U.S.’s deficit with China.

He now has to decide whether to stick or twist by going after the European Union too. Will he hit the tariff button again to energize his electorate, risking an economic slowdown during the election campaign? Or will he soft-pedal, trusting to the warm afterglow of deals that still have to live up to their hyperbolic billing?

Anyone who tried to process the giddying flurry of press conferences and soundbites from the World Economic Forum last week could be confused for not knowing what to think. The week started with signs of détente, as French President Emmanuel Macron said he wouldn’t levy a planned tax on digital services—which would hit mainly the big U.S. tech platforms such as Google and Facebook—until next year.

Finance Minister Bruno Le Maire said he was optimistic that a deal on how to tax digital companies could be hammered out soon.

The Organization for Economic Cooperation and Development, which is coordinating global work on the issue with a mandate from the G20, is due to present a solution to world leaders at this year’s G20 summit in Riyadh in November.

European officials are concerned the U.S. will withdraw from the process, having signaled its opposition to the mandatory framework proposed last year by the OECD’s experts.

Trump, for his part, quickly shot down suggestions that the U.S. had agreed to hold off on more import tariffs on EU products in return.

After a “great” meeting with the new European Commission President, Ursula von der Leyen, Trump threatened “a very high tariff on their cars and other things that come into our country,” unless a new trade agreement was forthcoming, without providing any further details. And just in case anyone doubted him, Treasury Secretary Steven Mnuchin repeated the tariff threat—this time toward the U.K.—two days later, saying that it, too, would face tariffs if it went ahead with plans to introduce a Digital Services Tax of its own in April.

Trump also claimed the EU wanted to arrange an “emergency meeting.” No-one in Brussels confirmed anything of the sort, although Von der Leyen did signal that she was “expecting in a few weeks to have an agreement that we can sign together” with the U.S.—one that would have chapters on trade, technology and energy. However, she too was light on details.

The EU certainly makes a tantalizing target: its trade surplus with the U.S. has nearly doubled over the last decade to a record $163 billion last year. While that’s only half of its deficit with China, the U.S. actually imported around 10% more goods from the EU last year than from its big Asian rival at $473 billion.

“I think an escalation of trade tensions between the U.S. and EU is likely this year,” Megan Greene, a senior fellow at the Harvard Kennedy School of Business, told Fortune. “Trump has repeatedly threatened to impose tariffs on imported autos and may follow through. The President—erroneously—cares about bilateral trade deficits and Germany has a large trade surplus with the U.S.”

Germany’s surplus with the U.S. on vehicles and components actually peaked in 2015 at nearly $37 billion, according to U.S. customs data, but has fallen by nearly a quarter since then due to the Dieselgate scandal and German producers’ increasing use of local manufacturing. Even so, for an administration hyper-sensitized to bilateral balances, it stands out like a sore thumb.

Steven Mnuchin, U.S. Treasury secretary, was part of the U.S. delegation at the World Economic Forum in Davos, Switzerland that hardened its trade stance against Europe.
Jason Alden—Bloomberg via Getty Images

Germans are long accustomed to seeing their surpluses as a sign of economic strength, but now there is a growing sense of concern that depending so much on the global consumer at a time when globalization is in retreat is actually, at the same time, a vulnerability.

The Deutsche Bundesbank, Germany’s central bank, wrote in its monthly report for January that a 25% tariff on European auto imports (akin to the 25% tariffs levied on many Chinese goods) could take 0.25% off eurozone gross domestic product growth. A 25% tariff on all EU exports to the U.S. could slice a full 1% off GDP in the bloc, in a year when the Commission only expects 1.2% growth even without a new trade war.

Nor are autos the only bone of contention for the Trump administration. It’s already levying tariffs on EU steel and aluminum, as well as another $7.5 billion in goods in response to unfair ‘launch aid’ given to Airbus. The latter even has the blessing of the World Trade Organization.

And the potential for an even bigger bust-up is on the horizon in the form of von der Leyen’s plan for a ‘Carbon Border Tax’ that may end up being levied on any trading partner deemed to have more lax environmental standards than the EU. Commerce Secretary Wilbur Ross already sees the risk that the carbon tax will damage U.S. interests.

“Depending on what form the carbon tax takes, we will react to it—but if it is in its essence protectionist, like the digital taxes, we will react,” Ross told the Financial Times last week.

Economists—including the Bundesbank’s—argue that the risks of slapping tariffs on EU imports are much higher for the U.S. economy, given that it’s much more closely entwined with the EU than with China. U.S. exports to the EU are three times as high as they are to China, giving the EU an abundance of potential targets for retaliatory measures. The more developed trade links also make the risk of negative knock-on effects more likely.

“We are far from being able to rule out that the U.S. will levy additional tariffs on a wide range of European goods,” the Bundesbank said. “But such a conflict would be expensive for both sides.”

—What the alleged Saudi hack of Jeff Bezos says about encryption
—A.I. in China: TikTok is just the beginning
—The long ocean voyage that helped find the flaws in GPS
—Mysterious GPS outages are wracking the shipping industry
—Into the ‘crucible’: How the government responds when GPS goes down