The long ocean voyage that helped find the flaws in GPS 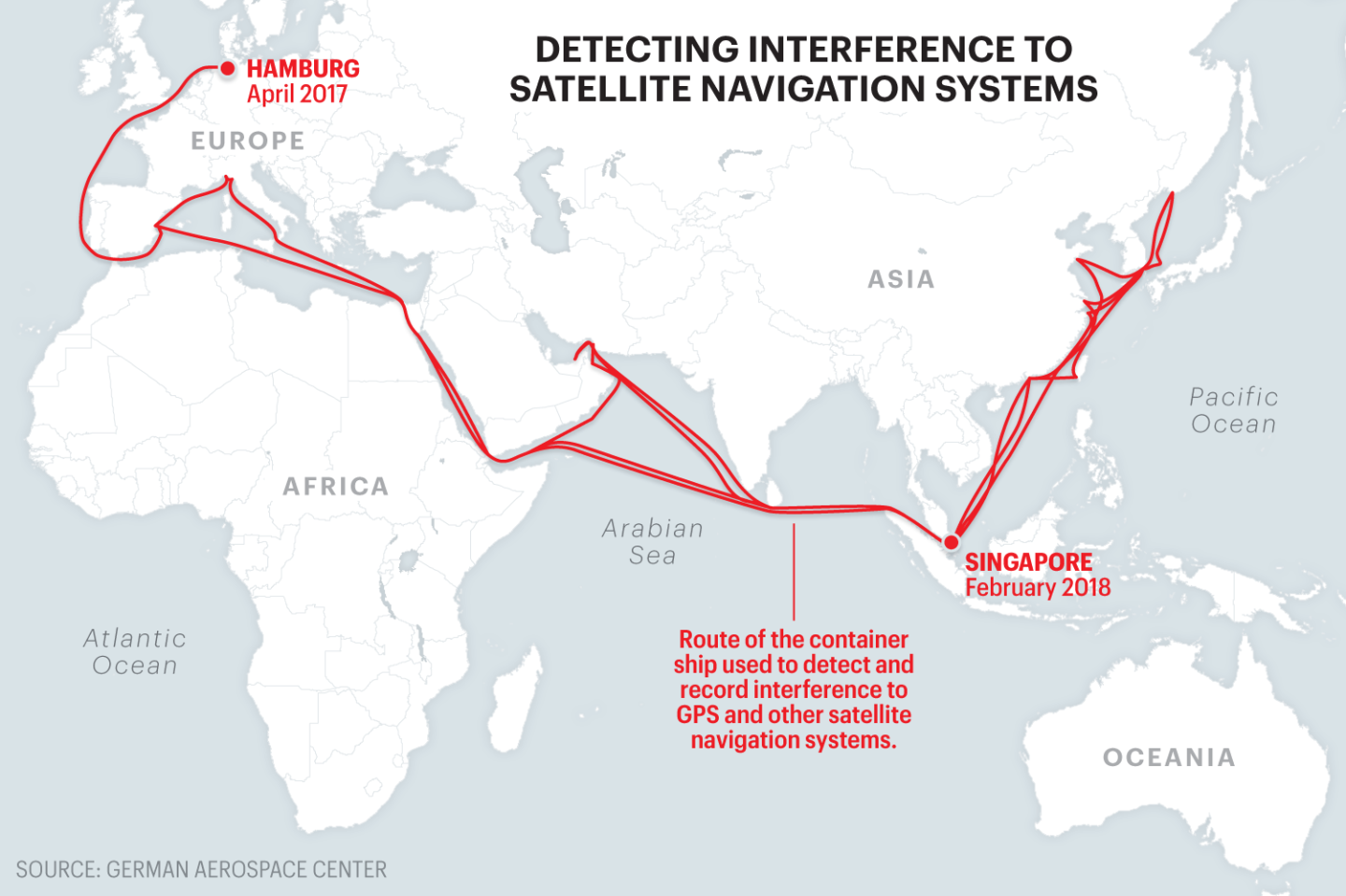 This article is part of the Fortune series, “When GPS goes wrong.”

In late April 2017, a commercial container ship left port in Hamburg, Germany. The ship looped around western Europe and through the Mediterranean, then passed through the Suez Canal to the Middle East, on its way to Asia. It was the first of many times the Basle Express would traverse a path between the continents, traveling thousands of miles and heading as far afield as far eastern Russia, before ending its journey in Singapore 10 months later.

The vessel itself was sailing standard commercial seaways. But it carried special cargo: On board were two specially built receivers developed by the German Aerospace Center, Germany’s counterpart to NASA, to detect the frequency of disruption to GPS and other satellite navigation systems along its route.

GPS interference was a problem that, by 2017, was anecdotally on the rise, according to multiple maritime experts and government agencies—and it was beginning to make the shipping industry nervous. (See Fortune’s feature story on the phenomenon here.)

The interference had been linked to “jamming” and “spoofing” techniques, which interrupt genuine satellite signals, either by disrupting them entirely or producing fake signals that can mislead a receiver. Commercially available “jammers”, though illegal, were cheap, and easy to find online, and disruption had increasingly been reported in geopolitical hotspots, particularly in the Black Sea around Russia-annexed Crimea. Later that year, after the Basle Express began its voyage, authorities in Norway and Finland would report outages during NATO drills.

But nobody seemed to know exactly how often GPS interruptions were occurring, how strong they were, and how they impacted shipping, one of the world’s most global industries.

The German Aerospace Center team gathered data that would help demonstrate the sheer scale of the problem. And what the team found surprised even the researchers themselves.

“It was a big deal!” says Emilio Pérez Marcos, one of the lead researchers on the study and a researcher in the Institute of Communications and Navigation at the aerospace center. “We expected to see some interference, accidental ones (maybe due to malfunction of equipment and such), but never so much and by no means so powerful.”

Interruptions from the Suez to Shanghai

The data from the Basle Express, which was first presented in September 2017 and has been expanded on since, presented a striking picture.

The crew documented interference with GPS—usually taking the form of much stronger conflicting signals—at some of the world’s largest seaports, including Jeddah in Saudi Arabia, Singapore, Hong Kong, and Shanghai, and less often, on the open sea.

At least 140 “strong” cases were documented, defined as powerful enough to disrupt the GPS receivers of a regular commercial ship. The researchers documented two particularly strong cases of interference, one in the Suez Canal, where the researcher’s receivers lost all GPS signals for hours, and another in Jebel Ali, a major commercial port just south of Dubai. Both those locations are relatively close to geopolitical conflict zones where other interruptions of GPS have been documented. (The Suez has witnessed a pattern of interruptions dating from mid-2017.)

The researchers have been quick to note that they can’t draw conclusions on which of the interference incidents they documented were caused intentionally, and which were accidental. They could guess, says Pérez Marcos, but not know for sure—and GPS interference is notoriously difficult to attribute.

Still, the Basle Express research has been one of the biggest contributions to a growing body of evidence about the scale of GPS disruption. Since its first research was published, reports from the U.S. Coast Guard Navigation Center has mapped out GPS risk areas, and a European Union-funded monitoring project that covered numerous international highways and ports recorded interference events in the tens of thousands.

That evidence is stirring a desire for a definitive response in the global shipping community. In June 2019, a letter to the U.S. Coast Guard signed by 14 maritime organizations cited the German study and asked the agency to address the problem of interference with the International Maritime Organization, the UN agency for shipping. (The Coast Guard recently told Fortune that it’s still considering what action to take.)

Meanwhile, reports of disruption from commercial ships have been spreading: Through 2018 and 2019, alleged jamming and spoofing was reported across the East Mediterranean, near the North Korean border, in the northern Scandinavian Arctic, around the Port of Shanghai, and in the Strait of Hormuz, the shipping chokepoint that separates the Persian Gulf states from export markets in Asia.

Coping with a ‘menace’

In total, this tide of evidence suggests that GPS is not as resilient as we’ve come to expect, and that the commercial shipping industry, in particular, needs to consider alternatives.

After all, the most widely used standard vessels and their equipment were developed in an era where unreliable GPS was impossible to imagine, points out Pérez Marcos. “They simply were not designed to cope with that menace,” he says.

To prepare, the industry may need to make a substantial investment: in technology, including pricey but more robust anti-jamming antennae; in training their crews more regularly in how to navigate without GPS—or, more likely, in both.

“When the GPS service is not available, it all comes down to two factors,” says Pérez Marcos. “Are there any other means of positioning and timing to keep navigating? Or, is the crew capable to navigate by old/more traditional nautical means?”

Without such back-ups, some crews would likely be completely fine in the event of a GPS disruption, Pérez Marcos points out, while others would be completely lost.

But like many in the industry, the researcher says his deeper concerns revolve around what’s to come: a looming age of automation in global shipping in which, as in many other industries, humans will be taken “out of the loop.” That will increasingly leave machines to assess what is a real or reliable GPS signal while at sea—and what to do next.

“That is a question that shall keep us scientists busy for the next years.”

—Mysterious GPS outages are wracking the shipping industry
—How GPS went from the tech everyone hated to the tech everyone needs
—Into the ‘crucible’: How the government responds when GPS goes down
—The World’s Most Admired Companies in 2020
—The forces behind Boeing’s long descent
Catch up with Data Sheet, Fortune’s daily digest on the business of tech.