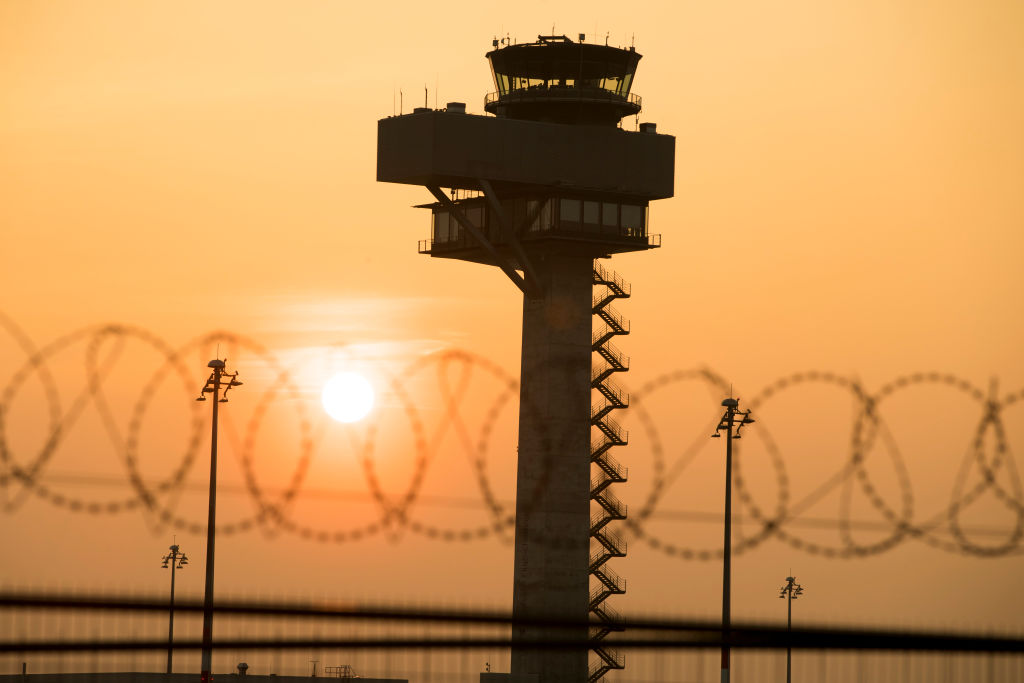 A control tower at the Berlin Brandenburg Airport, which has been under construction for years and is millions of euros over budget.
Emmanuele Contini—NurPhoto via Getty Images

In the otherwise empty hall, about 10 workers looked on as one controlled the smoke machine producing the plumes. After a few minutes, a piercing fire alarm sounded, and the airport’s smoke-sucking extractors roared.

This run-of-the-mill safety test hadn’t worked in times past. (In one instance, evacuation instructions in German and English were drowned out by the noise of the smoke fans.) But the success of the mid-December test is just one indication that the new Berlin Brandenburg Airport—infamous for its thousands of defects and numerous false starts—is maybe, finally, ready to open.

On Nov. 29, officials announced that Berlin’s “ghost airport” will begin operating on Oct. 31, 2020, more than eight years late and billions of dollars over budget. The commitment is firm but—given the airport’s bleak history—necessarily hedged.

“We are pretty sure that our finalization procedure of the terminal is on track,” said Engelbert Lütke Daldrup, the CEO of the airport’s parent organization, Flughafen Berlin Brandenburg (FBB).

“We are pretty sure”

I met Lütke Daldrup, a tall, red-haired city planner with thick black glasses, at the airport on a chilly Friday in December, just days after he announced—to the surprise of the German public—that this time the new airport will actually open. Berliners can be forgiven if they don’t believe him: Lütke Daldrup, a long-time developer in Berlin and Leipzig, where he was responsible for a 2005 BMW plant, is the fourth executive to hold the top job since the project’s launch.

Developers broke ground on the new airport in 2006, but major problems began to emerge in earnest in May 2012, when the initial grand opening was cancelled due to the faulty fire safety system. Executives originally planned to deal with the problem by stationing 800 workers with cell phones throughout the terminal as a human evacuation infrastructure, but the ribbon-cutting was scrapped altogether after more technical flaws emerged—escalators that were the wrong size, poorly-installed cables, a shortage of check-in desks.

And that was just the start.

Year after year, delays mounted, executives cycled through, and the saga became a national disgrace and a punchline. It has also destroyed political careers, namely that of Klaus Wowereit, the former beloved mayor of Berlin once thought of as a potential rival to German Chancellor Angela Merkel. The project’s former technical director was convicted on corruption charges tied to the project. On a deeper level, the debacle has called into question Germany’s international reputation for engineering efficiency and competence.

Lütke Daldrup doesn’t appear to spend too much time thinking about all that. He knows how to stick to his talking points. The 63-year-old executive took over the role in 2017, and later that year announced that the airport would open in Oct. 2020. For now, he’s standing by it. “I have a track record as a building expert, and I have a track record as an expert in public service,” he said. “I know how to handle the political and media pressure.”

“We are pretty sure that our finalization procedure of the terminal is on track,” said Engelbert Lütke Daldrup, the CEO of the airport’s parent organization, Flughafen Berlin Brandenburg, in November 2019.
Gregor Fischer—Picture Alliance via Getty Images

That pressure is rooted in what some believe to be the project’s original sin—that the airport was structured as an entirely government-run, government-owned entity. FBB is owned jointly by the federal government, Berlin, and Brandenburg, the state encircling the capital. From the start, development has faced political interference, allegations of bribery, and persistent red tape.

The original expected cost of €2.8 billion ($3.1 billion) has ballooned to more than €7.3 billion ($8.1 billion). The government spends millions of euros every month just to keep the unopened building up and running. And it has become a literal case study in how not to handle a public infrastructure project. Researchers from Berlin’s Hertie School of Governance wrote in 2015 that “ignorance and unfounded optimism of sponsors and FBB management trumped thoughtfulness and appreciation of risk.” They concluded that “the possibility of failure was not taken seriously and the extent of the problems that eventually surfaced were inconceivable.”

Construction of the Berlin Brandenburg airport began in 2006 and is scheduled to be completed in October 2020.
Ralf Hirschberger/picture alliance—Getty Images

If Lütke Daldrup can meet his self-imposed deadline, it will be something of a lukewarm triumph. Some in the industry thought the airport would never open. One Lufthansa executive privately predicted in 2018 that it would be “demolished and rebuilt.” But Lütke Daldrup stressed that after understanding the thousands of problems ahead of him, he set a reasonable timeline for the future.

“We have reliable building permits since 2017. We have the expertise of the [inspecting company] TÜV Rheinland on the project for three years now, who do the testing and look whether everything works properly,” he said. “Last summer, we had a big functional test of all technical equipment working together, and we had a very good test result. Therefore, we are pretty sure that the timetable is reliable and secure.”

The airport still requires the necessary final approvals that have dogged the process for years. In May, Der Spiegel reported that inspector TÜV Rheinland still had found more than 10,000 defects with the airport.

In the meantime, every Berliner seems to have a favorite airport fun fact. Maybe it’s that all of the flight information monitors burned out after they were left on for years; they cost half a million euros to replace. Or perhaps it’s that Air Berlin, which planned to make the new BER its hub, went out of business as it waited for the opening. Or maybe it’s that the national rail company Deutsche Bahn has for years sent empty trains back and forth to the airport on weekday nights for what are known as “Belüftungsfahrten”—or “ventilation drives,” required to prevent dampness and mold.

Even the president of the state of Brandenburg sees the airport saga as a teachable moment. “I think people can learn a lot from us, and we have learned a lot on this airport,” said Dietmar Woidke, a social democrat who has led the region since 2013. “You have to trust the people with whom you are working,” he said. In Woidke’s view, airports should be owned by governments—but not built by them. “That’s the difference,” he said.

Now with just a few months until opening, Germans are wondering if the airport drama is really over. “Of course there is a risk, but I think the current management of the airport has a good understanding and they are realistic in what they are doing,” said Heinrich Großbongardt, a German aviation expert and former spokesperson for Boeing. He estimated that there was about a 90% chance the airport meets its Halloween opening day pledge.

For Berlin’s aviation infrastructure, the opening can’t come soon enough. Two Cold War-era airports currently serve the city: Tegel in the west and Schönefeld in the east, with the latter adjacent to the new site. Tempelhof Airport, known for the 1948 Berlin Airlift, ceased operations in 2008. The airfield is now a public park. On a recent tour, a Tempelhof guide noted that Berlin has a “long history of unfinished airports.” The Nazis were unable to complete that massive airport before losing the war.

For all the trouble that’s accompanied BER’s development, a fundamental question remains: whether it can actually meet Berlin’s growing demand. In 2018, a record 34.7 million passengers traveled through the city’s two existing airports—12.7 million at Schönefeld and 22 million at Tegel. BER, for its part, will open with a capacity of up to 27 million passengers. It will replace Tegel and subsume nearby Schönefeld into a single complex, making BER the only Berlin airport. Officials say that the combined entity can keep up with the flow of passengers, and by 2040 with expansions will be able to handle 55 million passengers a year.

Still, despite its size, aviation experts don’t expect BER to become a major international transfer center—mainly because the country already has plenty. Frankfurt and Munich, for instance, are primary hubs for German airline giant Lufthansa. But Berlin will still likely be home to new direct long-haul flights to destinations in North America and Asia, which the city’s two current airports are barely equipped to handle.

Lütke Daldrup touts BER’s “modern infrastructure,” which can handle such routes. “We do not have very much in Berlin nowadays with our old infrastructure,” he said. “It’s very important for the region and it will give us new imports and economic development.”

After so long, what wider economic benefit the new airport will bring to the region remains to be seen, apart from relieving Berlin’s Cold War-era airports from the deluge of tourists arriving on Europe’s many budget airlines. But some already see the project falling short of the high hopes that Berliners had in the early 1990s, when conversations about a new airport began shortly after German reunification. Following decades of bifurcation, Berlin’s leaders hoped they could lure back major companies—banks, factories, airlines—and refashion the capital into a global industrial center like it was in the 1920s.

“For me, the whole thing is an example of the whole story of failed expectations of the 1990s,” said Hanno Hochmuth, a historian at the The Leibniz Centre for Contemporary History Potsdam. “The times of big money and big industry in Berlin are over. Today, Berlin lives on culture, tourism, and politics play a significant part.”

Woidke, the Brandenburg president, said that while he is confident the new airport will make the region more attractive for companies and travelers, the eventual opening will be a staid affair. There’s no reason to celebrate. “If Mrs. Merkel comes, she will get a coffee, and that’s all,” Woidke told me. “I will be glad when it finally opens, but I’m not in the mood to party.”

—The World’s Most Admired Companies in 2020
—A.I. in China: TikTok is just the beginning
—China braces for a deadly new virus as millions travel for Lunar New Year
—CEOs more pessimistic about global economy than they’ve been in 8 years
—U.S. brands think they understand China’s market, but they don’t
Catch up with Data Sheet, Fortune’s daily digest on the business of tech.