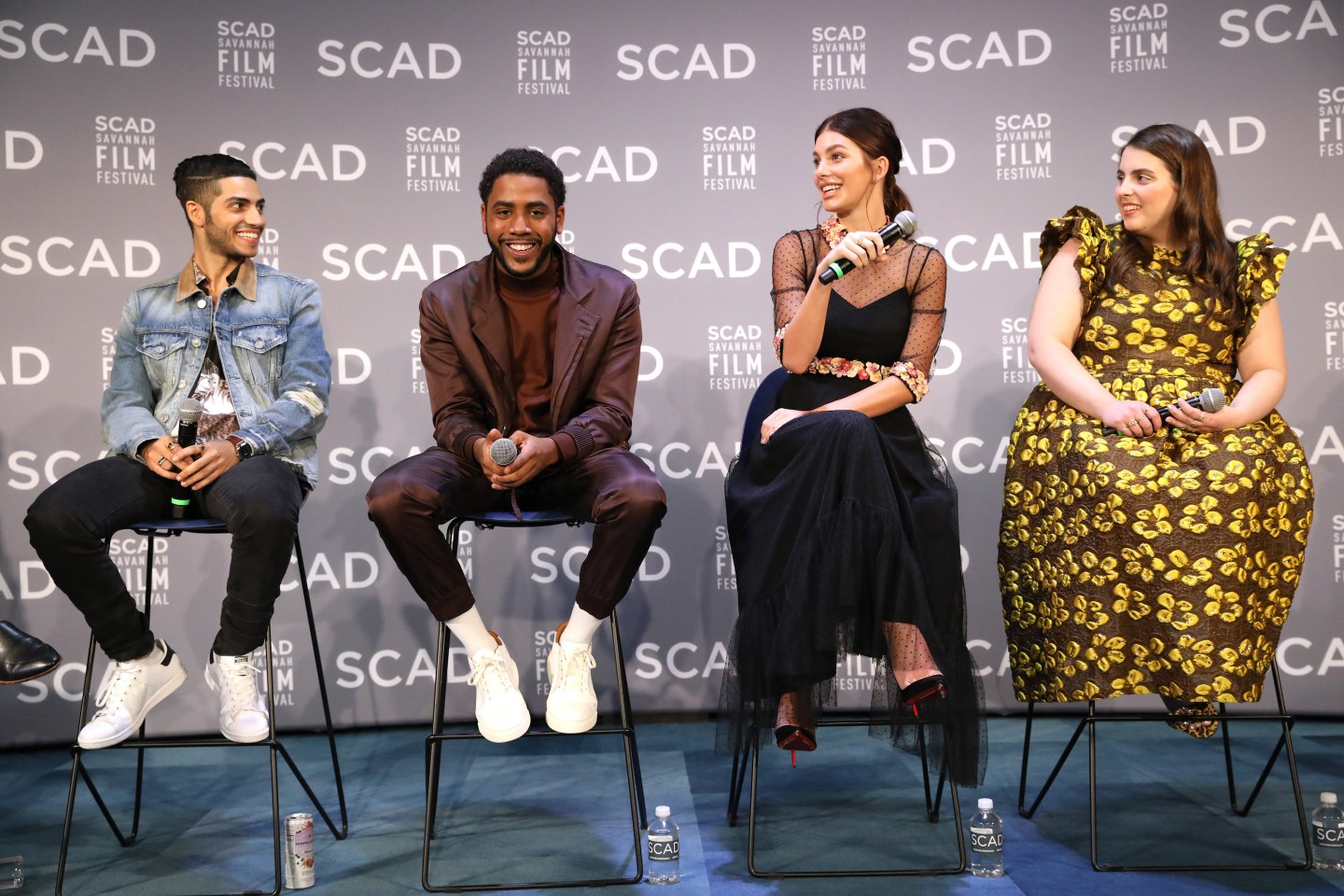 They’re not quite household names—yet—but you’ve undoubtedly seen them in some of the most acclaimed film and TV projects of the past few years.

At the 22nd annual SCAD Savannah Film Festival, which ran from Oct. 26 to Nov. 2, Breakout Award recipients Beanie Feldstein (Booksmart), Jharrel Jerome (When They See Us), Mena Massoud  (Aladdin), and Camila Morrone (Mickey and the Bear) opened up about the opportunities and setbacks they’ve experienced in their burgeoning careers.

On the parts they didn’t get

Feldstein recalled the disappointment she felt when she found out she didn’t get a part in the school musical during her senior year of college. She was on the way to audition for a guest role on Netflix’s Orange is the New Black and she funneled her frustration into the audition.

“I remember my line was ‘I just put a roofie in my own drink,’” the actress told the audience of mostly SCAD students. She got the job. There were other roles she wanted, but didn’t land, including on a pilot that Amy Poehler was producing. “She’s one of my heroes,” said Feldstein. “This business is not only about getting jobs. It’s about getting to be around or near your heroes.”

Feldstein’s big breakthrough came when she starred in the Golden Globe-winning and Oscar-nominated Lady Bird, written and directed by Greta Gerwig. She followed that up with Booksmart directed by Olivia Wilde (recipient of the Rising Star Director Award at the SCAD Savannah Film Festival).

“To get to work with two of the most ridiculously bright, clever, brilliant, warm directors—Greta Gerwig and Olivia Wilde—who I think will define a new generation of cinema, has been one of the greatest honors,” said Feldstein.

Before beating out 2,000 actors for the title role of Aladdin in Disney’s 2019 live-action remake of the beloved animated musical, Massoud said he lost out on a TV role he wanted.

“But if I had booked that job, I wouldn’t have been able to do Aladdin, so it’s a blessing in disguise. You never know how things will work out,” said Massoud, who stars in the upcoming Hulu original series Reprisal, set to premiere on Dec. 6.

“I think my booking ratio is 100 auditions for one job,” said Camila Morrone, who was at the festival with the father-daughter drama Mickey and the Bear, which premiered at SXSW and will be released on Nov. 13. Written and directed by Annabelle Attanasio, Mickey and the Bear has an 100% rating on Rotten Tomatoes (at press time).

Morrone said that just as she was about to start rehearsals for the indie film, she got called to audition for “probably the biggest movie of the year—I’m not going to say which one.” She didn’t get that role, which she said, “would have changed my life,” but she has no regrets.

“The best choice in my life was doing this movie,” said Morrone, who previously starred in Augustine Frizell’s comedy Never Goin’ Back, which premiered at Sundance in 2018.

Jerome said he was dejected when he didn’t land a TV part he wanted, but it worked out for the best when he was cast in his feature film debut in Barry Jenkins’ Moonlight. The independent film famously went on to beat out La La Land for the 2017 Academy Award for Best Picture.

“I was super-blessed to book Moonlight,” said Jerome, who recently won a 2019 Emmy Award for Lead Actor in a Limited Series for his portrayal of Korey Wise, one of the “exonerated five” in Ava DuVernay’s Netflix series When They See Us.

Rare is the actor who actually enjoys auditioning. Regularly offering yourself up for criticism can be hard on the ego, for one thing. Sometimes it takes a matter of shifting perspective to stay sane during the process.

“I always view auditions as the first and last time I’ll ever do a character, so that’s how I like to see the joy in it,” said Massoud. “Assuming I don’t ever book this, I get to play this character this one time and give it my all because I’ll never play it again.”

Morrone has found unexpected opportunities working with first-time female filmmakers and taking chances on smaller, independent films such as Never Goin’ Back and Mickey and the Bear.

“We made Mickey and the Bear with barely any money with a first-time director, a first-time director of photography, and a crew who had just graduated from NYU film school. We were all very much in this together for the first time,” said Morrone. “There’s no famous actor or big explosions. It’s not a Marvel movie. I thought nobody was going to see this film. And yet here I am.”

The challenges of getting into character

Stepping into the shoes of a beloved character like Aladdin was daunting for Massoud, but he turned to co-star Will Smith (Genie) for perspective. “It’s something Will and I talked about a lot because he had big shoes to fill too with the Genie. We just wanted to make it our own,” said Massoud.

For Jerome, depicting a real person such as Korey Wise, who was one of five young black men wrongfully convicted and imprisoned for the rape of a jogger in Central Park, presented a challenge.

“This man’s story is so powerful and so strong and painful that I knew that if I was going to be the one person blessed on this planet to tell this story that I had a job to do,” said Jerome. There were moments during the production of When They See Us, when he couldn’t sleep or eat or speak to anyone. “I would bring the pain that I allowed myself to dive into on set home with me,” he said. Though there were tormented moments, he was inspired by Korey. “I had to do justice to this injustice,” he said.

In August, FX announced that Feldstein would play Monica Lewinsky opposite Sarah Paulson as Linda Tripp in the third installment of American Crime Story, about the impeachment of former President Bill Clinton.

Though she hasn’t yet met Lewinsky, Feldstein said they’re in touch over messaging. “Monica is really a symbol of resilience and strength. The activism work that she does for the anti-bullying movement is kind of remarkable and awe-inspiring. I feel deeply privileged to bring her story to life,” said Feldstein.

The young actors seemed to agree that sometimes getting the part is a matter of timing—and luck. “You’ve got to have confidence that the universe is working out for you,” said Massoud.