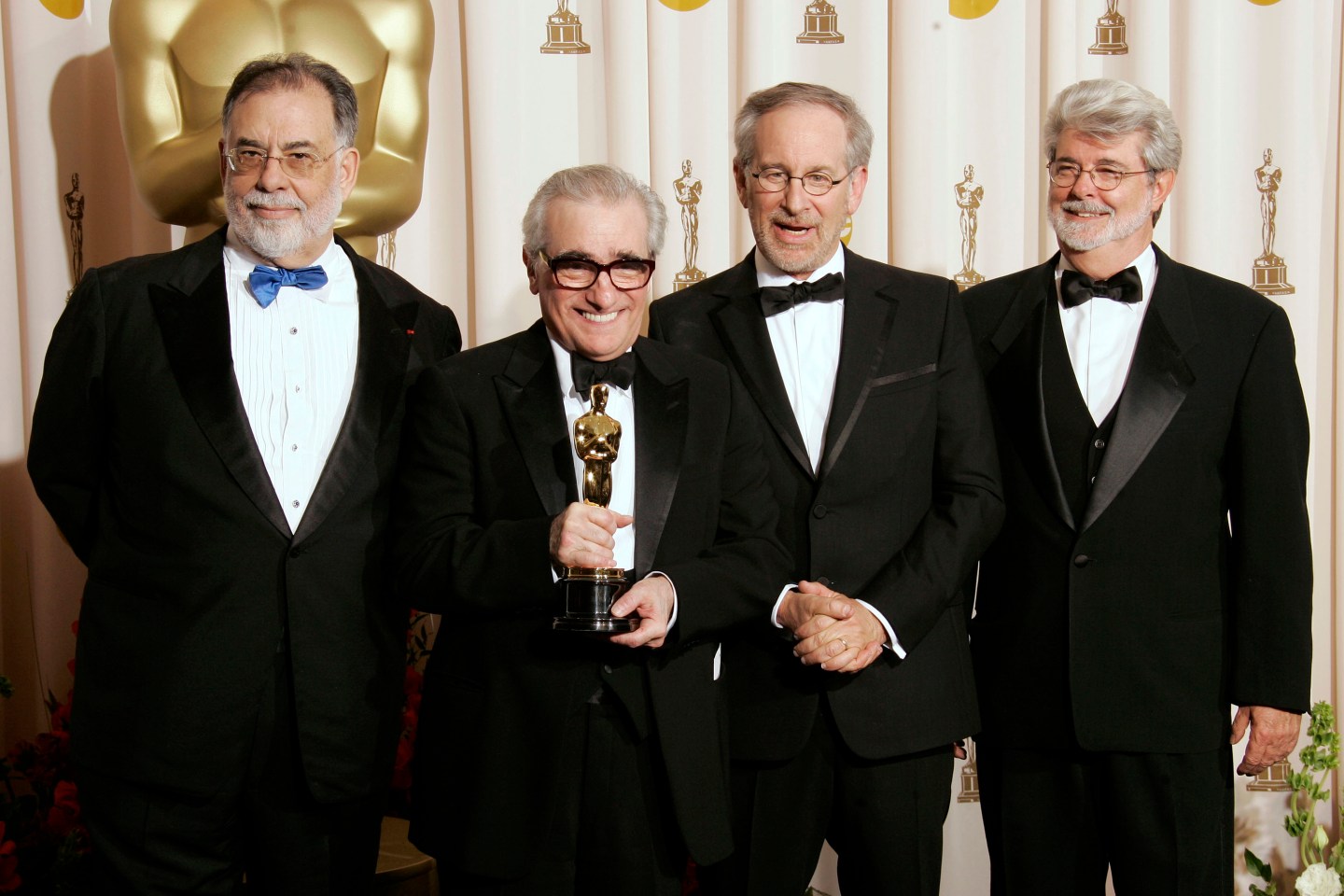 Like a comic-book supervillain bent on world domination, or a cold-blooded gangster with death in his eyes, the debate over whether Marvel movies constitute “cinema” rages on, unabated by time, undeterred by those pleading for the importance of varying opinions to a healthy civil discourse.

Francis Ford Coppola, legendary director of The Godfather and Apocalypse Now, is the latest filmmaker to enter the conversation with disparaging remarks about Marvel superhero films, further inflaming a debate started weeks ago by Martin Scorsese.

At a press conference in Lyon, France, where Coppola was being feted at the Lumiere festival, the director said that he fully agreed with Scorsese’s personal assessment of superhero movies such as Avengers: Infinity War and Spider-Man: Far From Home, then contributing his own two cents.

“Martin was kind when he said it wasn’t cinema,” Coppola said. “He didn’t say it was despicable, which I just say it is.”

Coppola discussed Marvel films while speaking this past Saturday. “We expect from cinema that it brings us something, some enlightenment, some knowledge, some inspiration,” said Coppola, appearing to slight Marvel’s mega-franchise structure. “I don’t think anyone takes anything away from the experience of watching the same film over and over.”

During an interview with Empire Magazine earlier this month, in support of his organized-crime opus The Irishman, Scorsese set off the initial social-media firestorm by saying that he doesn’t watch Marvel movies.

“I tried, you know? But that’s not cinema,” said the director then. “Honestly, the closest I can think of them, as well-made as they are, with actors doing the best they can under the circumstances, is theme parks.”

Clarified Scorsese: “It isn’t the cinema of human beings trying to convey emotional, psychological experiences to another human being.”

Scorsese doubled down on his criticism of the pop-culture dominance enjoyed by big-budget superhero cinema—while stressing the personal nature of this disinterest—during his David Lean lecture in London last weekend. “Theatres have become amusement parks,” he said then. “That is all fine and good, but don’t invade everything else in that sense. That is fine and good for those who enjoy that type of film and, by the way, knowing what goes into them now, I admire what they do. It’s not my kind of thing, it simply is not.”

At the BFI London Film Festival, where The Irishman was closing-night film, Scorsese reaffirmed the stance. “It’s not cinema, it’s something else,” he said. “We shouldn’t be invaded by it. We need cinemas to step up and show films that are narrative films.”

Scorsese’s comments drew a harsh and often outsized response from many Marvel fans on social media, with some calling the director “jealous” and others going so far as to question his continued artistic relevance.

More measured responses, in large part, came from those who reminded that Scorsese expressing his personal opinions does not invalidate the thoughts and feelings of those who hold superhero movies in higher regard.

James Gunn—director of Marvel’s Guardians of the Galaxy movies as well as WB/DC’s darker-toned The Suicide Squad—has been among the most ardent defenders of the multi-billion-dollar superhero-movie industry against the personal tastes of two older filmmakers.

Taking to Instagram, Gunn responded indirectly to Coppola’s comments by making the case that different generations harbor varying opinions toward the popular cinematic genres of the day.

“Many of our grandfathers thought all gangster movies were the same, often calling them ‘despicable,'” wrote Gunn.

“Some of our great grandfathers thought the same of westerns, and believed the films of John Ford, Sam Peckinpah, and Sergio Leone were all exactly the same. I remember a great uncle to whom I was raving about Star Wars. He responded by saying, ‘I saw that when it was called 2001, and, boy, was it boring!,'” he added. “Superheroes are simply today’s gangsters/cowboys/outer space adventurers. Some superhero films are awful, some are beautiful. Like westerns and gangster movies (and before that, just MOVIES), not everyone will be able to appreciate them, even some geniuses. And that’s okay.”

Gunn had previously taken umbrage with Scorsese’s comments, tweeting: “Martin Scorsese is one of my 5 favorite living filmmakers. I was outraged when people picketed ‘The Last Temptation of Christ’ without having seen the film. I’m saddened that he’s now judging my films in the same way.”

Robert Downey, Jr., Doctor Strange scribe C. Robert Cargill, The Avengers director Joss Whedon, and Thor: Ragnarok helmer Taika Waititi have been among those to speak up in defense of the Marvel movies in which they each have, creatively, played sizable roles.

On Howard Stern’s SiriusXM show earlier this month, Downey said, “I appreciate [Scorsese’s] opinion because I think it’s like anything, we need all of the different perspectives so we can come to center and move on.” However, of Scorsese’s specific opinion that Marvel movies aren’t “cinema,” he added, “It’d be like saying Howard Stern isn’t radio. It makes no sense to say it.”

At the center of the social-media noise surrounding Scorsese and Coppola’s statements lies an always nebulous distinction between movies and “cinema,” one that far predates the Marvel Cinematic Universe but has always been individualized and debatable to the point of futility.

Movies, some contend, are more concerned with commercial appeal than artistic statement. Cinema, they’d say, is characterized by the personalities and philosophies of its creators, rather than the more calculated and financially minded decision-making process that goes into making a movie. Cinema provokes and challenges; movies satisfy. As such broad, banner statements may signify, the difference between the two is inherently subjective—to such a point that efforts to reach a working, non-tautological definition of both that distinguishes between the two is almost certainly doomed to failure.

Scorsese and Coppola, considered two of the greatest living film directors, are entitled to their opinions, and to watch the kinds of films they most enjoy.

But present in the directors’ critique of Marvel movies is a related protest of how the superhero genre’s box-office dominance has taken hold of Hollywood, upending a studio landscape that the directors evidently feel was once much friendlier to narrative filmmakers. Put another way, their dismissal of Marvel may have less to do with the films itself and more to do with what their cultural dominance muscled out of the multiplex.

Demanding that Scorsese and Coppola warmly embrace this particular age of big-budgt studio filmmaking—one that relies almost exclusively on presenting pre-existing intellectual property in a scaled-up, visual-effects-heavy manner—may be asking a lot.

When Steven Spielberg’s Jaws (1975) and George Lucas’ Star Wars (1977) were first released, their reliance on sound and spectacle paved the way for a new form of mass entertainment, one that restored the movie theater as a premier destination after a decade in which it had become increasingly specialized, rife with European arthouse cinema and New Hollywood movies—among them titles by Coppola and Scorsese.

When Spielberg and Lucas arrived on the scene, leading a new charge of popular entertainment, filmmakers more concerned with the artistry, contemplation, and aesthetic vision saw their opportunities dwindle. It’s not difficult to envision why, forced to reckon with that groundswell shift, Scorsese and Coppola weren’t first in line for Captain Marvel.

Of course, the foremost custodians of one popular culture are never those most receptive to that culture’s self-styled successors. The poet John Keats was greeted with scathing reviews in his time; “he is a boy of pretty abilities, which he has done everything in his power to spoil,” read one 1818 review of Endymion, predicting Keats would never be published again. As Anthony Breznican pointed out in Vanity Fair, Truman Capote once regarded Jack Kerouac with comparable disdain, saying of the author’s beat poetry: “That’s not writing, that’s typing.”

This is not to predict that Infinity War will necessarily be held up as a great work of art in the centuries to come (though it will almost certainly be considered an important one, for myriad reasons beyond the artistic), only that it’s perhaps inadvisable to task filmmaking titans to appraise the value of more commercially minded movies that either have ever sought to make or encourage.

—Disney+ reveals its slate of feel-good unscripted fare
—Streaming wars will cost Netflix another $2 billion
—Spotify saved the music industry. Now what?
—Robert Eggers talks The Lighthouse, The Northman, and… Mary Poppins?
—And the Oscar for Best Picture will go to…
Follow Fortune on Flipboard to stay up-to-date on the latest news and analysis.