With Weeks to Go Until Launch, Apple TV+ Plots Its Future With ‘World’s Greatest Storytellers’ 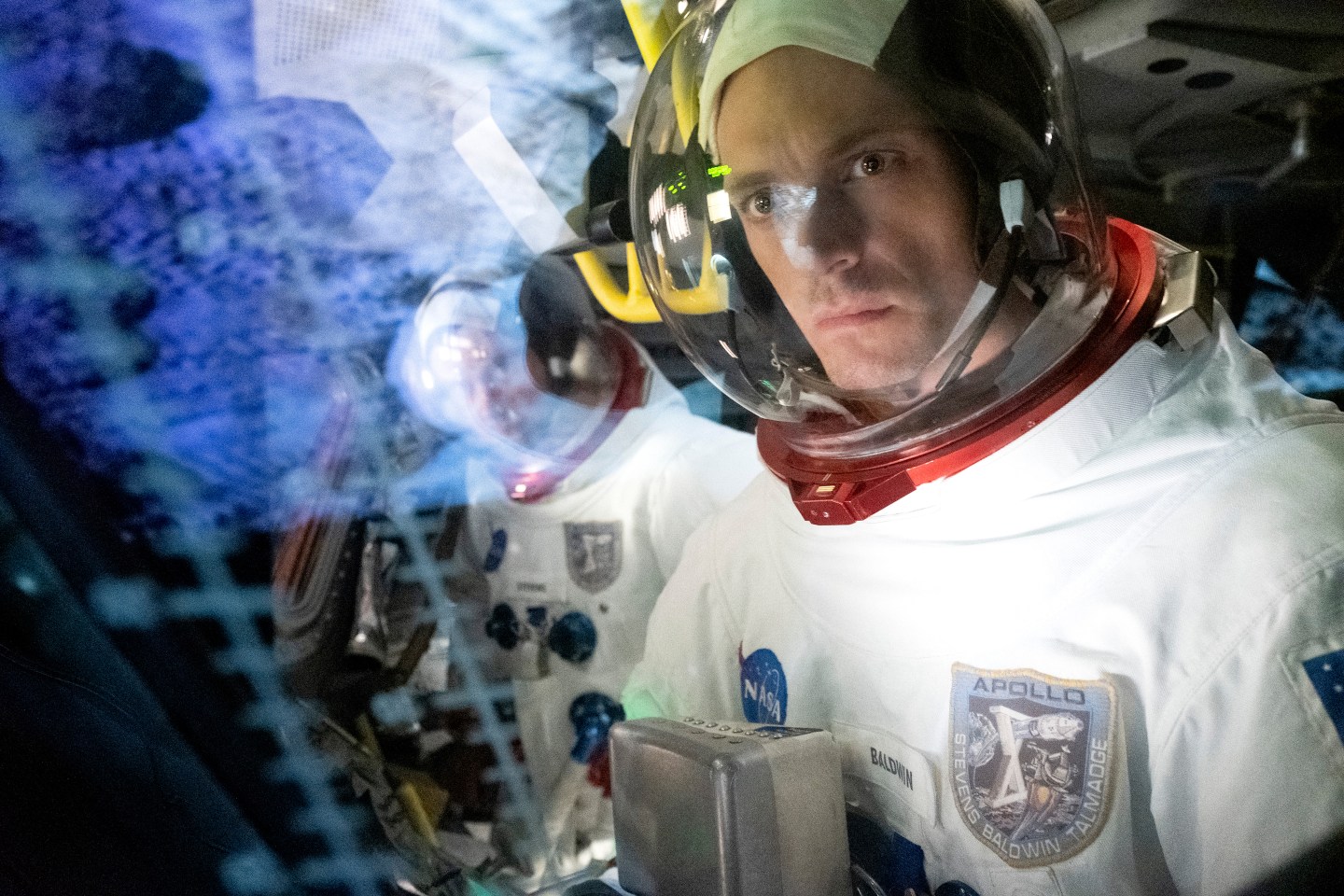 Apple TV+'s "For All Mankind" is reportedly already renewed for a second season, ahead of the streaming service's official launch Nov. 1.
Apple TV+

Apple TV+ may be weeks away from launching, but the tech giant’s streaming neophyte is already thinking years ahead in its ambitious plot to dominate film and TV spaces with a slate of buzz-building prestige programming.

As Apple competes for eyeballs in an increasingly crowded streaming landscape, it will face off against similarly deep-pocketed entrants like Disney+ (launching Nov. 8) and established forces like Netflix, Hulu, and Amazon Prime Video, all of which boast a deep back catalog of programming that Apple lacks.

But the tech giant’s initial plans for Apple TV+ suggest that it’s not aiming to replace Netflix so much as rival HBO, carving out a non-dominant but still formidable space in the streaming space and earning its keep with trophies to line the walls in Cupertino, through collaborations with Hollywood’s best and brightest.

With The Morning Show guaranteed a second season as part of its initial order, Apple has reportedly handed down renewals to additional members of its freshman class, including space-race drama For All Mankind, dystopian thriller See, YA-aimed Dickinson, immigrant-centered anthology Little America, and mystery drama Home Before Dark. The Hollywood Reporter reported all but For All Mankind, on which Deadline had the scoop earlier this week.

All those series will be available at launch on Nov. 1, with buzzy entrants like M. Night Shyamalan’s mystery box Servant (Nov. 28) and Octavia Spencer’s true-crime thriller Truth Be Told (Dec. 6) padding out Apple TV+’s first month. By renewing its original series early, the service is said to be amortizing costs and getting ahead of any gap in its plan to steadily roll out original series across its first few years. As it seeks to attract the attention of awards bodies, that kind of brand consistency—which worked wonders for Netflix and HBO in past years—will matter.

In a similar vein, Apple’s working to secure its partnership with A24, a thought leader among boutique movie studios whose social-media savvy and innovative rollout strategies stand to teach the tech giant much about making a splash in Hollywood. Deadline reported Wednesday that Apple and A24 will team for The Sky Is Everywhere, a drama that Madeline’s Madeline filmmaker Josephine Decker will direct, from a script by Jandy Nelson (author of the bestselling source material, a young-adult novel).

It’s Apple’s second project with A24 since formalizing a partnership with the studio late last year. The first, from Lost in Translation director Sofia Coppola, is a father-daughter drama titled On the Rocks, starring Rashida Jones and Bill Murray. Even before those titles, Apple will launch The Elephant Queen, a potentially awards-tipped documentary about a mother elephant seeking to protect her young, with help from A24. The studio’s better known for indie narrative fare, but its first documentary effort, Amy, won the Oscar in 2016.

Though collaborating with outside studios is one tried-and-true approach to entering the streaming space, Apple is also launching its own in-house studio, working with Steven Spielberg and Tom Hanks to produce Masters of the Air, a follow-up to their WWII epics Band of Brothers and The Pacific.

Spielberg’s been a pivotal supporter of Apple TV+, bringing the tech company much-needed Hollywood credibility as it’s sought to avoid sharing Netflix’s reputation as a brash, arrogant “disruptor” of the entertainment industry. His interest in revisiting Band of Brothers territory with Apple is seen as something as a coup for the service, especially given the awards success of Spielberg’s previous WWII efforts and the fact that the series was previously (per Masters of the Air author Donald L. Miller) in the works at HBO as a nine-hour series.

Spielberg’s Amblin Television, behind the series, was also working with Apple on Amazing Stories, reviving Spielberg’s own anthology series from the ’80s. That series, reports THR, ran into the old creative differences during its early development process, with originally tapped showrunners Bryan Fuller and Hart Hanson parting ways after pushing for an edgier version of the project. Apple saw the series as more aspirational in tone, eventually bringing in Once Upon a Time‘s Edward Kitsis and Adam Horowitz to replace them and bumping the series off its previously planned launch-date debut slate.

Such stumbles were always inevitable as Apple TV+ enters a programming space in which creating original content is both all important and unfamiliar to corporate executives.

Awareness of that knowledge gap is surely one reason Apple’s worked so diligently to get star creators in the door.

In addition to Spielberg, deals have been struck with Oprah Winfrey, Roma filmmaker Alfonso Cuarón, Fast & Furious filmmaker Justin Lin, and Friday Night Lights creator Jason Katims. Overall deals have been reached as well with Graham Yost (Justified) and X-Men producer Simon Kinberg. And Josh Schwartz and Stephanie Savage—creators of teen hits The O.C. and Gossip Girl —have Looking for Alaska arriving Friday on Hulu but will then commit to a first-look deal at Apple. There’s also Lisey’s Story, a Stephen King adaptation starring Julianne Moore and Clive Owen, coming down the pipeline from J.J. Abrams’ Bad Robot Entertainment.

But initially, Apple TV+ will bank on the star power of Reese Witherspoon and Jennifer Aniston to give it a critical hit out of the gate. The Morning Show, its much-teased look inside a fictional newsroom in crisis, has already been handed a two-season order; it’s been the centerpiece of Apple TV+ in this early offing, with Aniston and Witherspoon covering Entertainment Weekly‘s Fall TV Preview and the series’ trailers grounding a special event at Apple’s headquarters earlier this year.

A big showing on the awards trail in the ramp-up to next year’s Emmys feels probable, especially given the timely, #MeToo dimensions of the story, which finds Aniston’s character mulling the absence of a friend and co-anchor (Steve Carell) fired for apparent misconduct. If The Morning Show doesn’t land, it won’t just be a public embarrassment for Apple; it’ll be a pricey one, given that the show reportedly cost $300 million, with Aniston and Witherspoon each securing a $2 million fee per episode.

That said, with Apple’s $1 trillion market cap, the tech giant can divert however significant an amount to its original TV+ programming it so chooses without feeling a pinch. See, starring Jason Momoa in a dystopian vision of a future in which the world’s gone blind, will reportedly cost Apple an estimated $240 million across two seasons. And estimates for Masters of the Air, a massive undertaking for Apple to produce, go above $200 million, which is likely one reason it never got made at HBO.

With a $4.99 entry point (which drops down to free for a year if you buy an Apple gadget), Apple’s gearing up to be a more accessible premium cable network, one with deceptively little overhead and a stated commitment to high-quality programming from (as per its newly launched press site) “the world’s greatest storytellers.” If it continues to put up the money for such a venture, viewers will reap some significant benefits in the short-term. The bigger test for Apple TV+ will come around its one-year mark, as it either makes a grand entrance at the Emmys or remains, despite its best efforts, alienated from such accolades within a sometimes exclusive industry it’s undeniably new to.

—And the 2020 Oscar for Best Picture will go to…
—Why Parasite is the film everyone’s talking about
—The best movies that came out of the 2019 New York Film Festival
—Kevin Smith isn’t done being ridiculous just yet
—Recap: Succession season two episode 10
Follow Fortune on Flipboard to stay up-to-date on the latest news and analysis.