This Irish Bill Could Create Huge Problems for U.S. Companies Like Apple 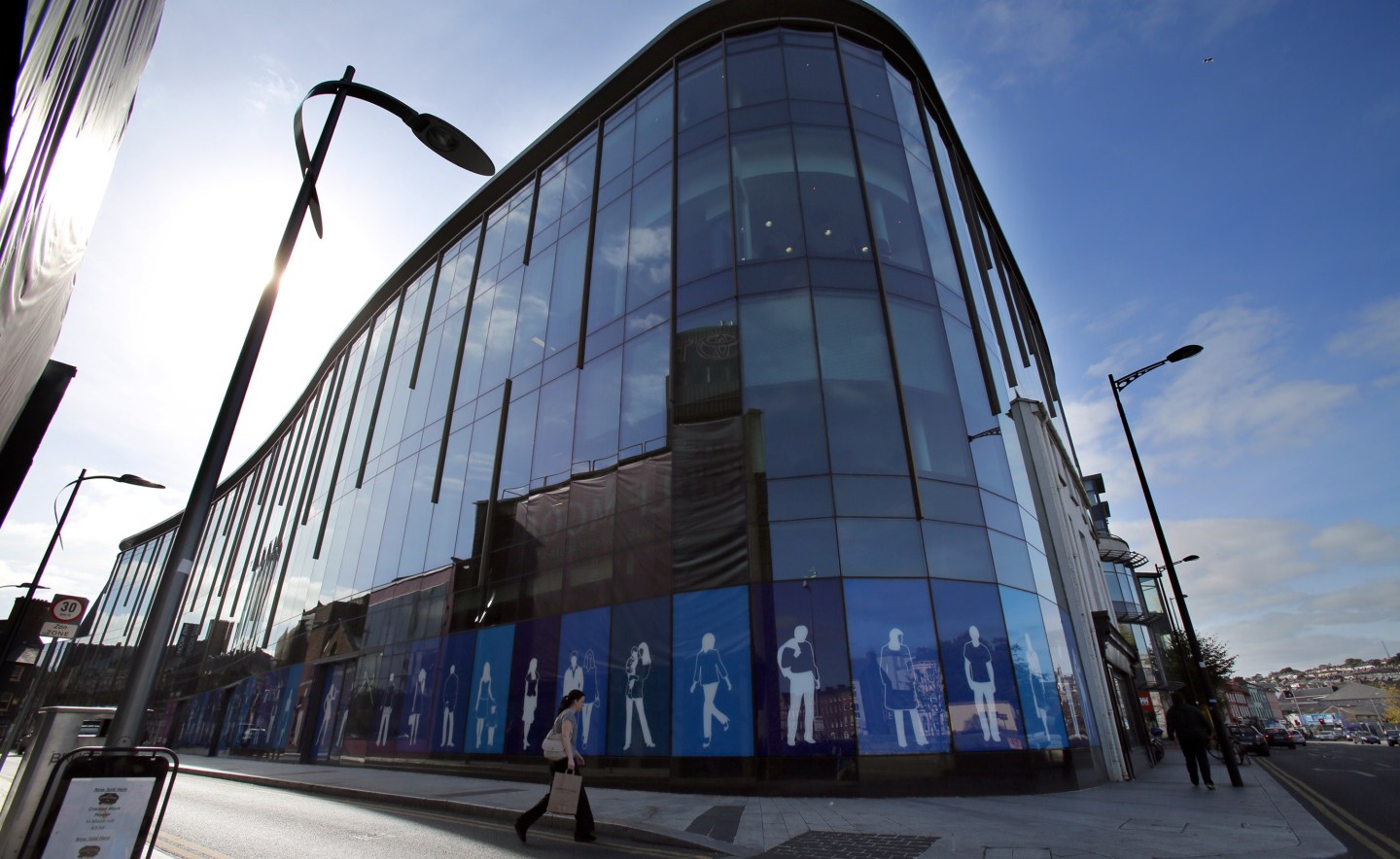 TO GO WITH AN AFP STORY BY CONOR BARRINS A woman walks past Apple's new offices on Half Moon Street in Cork city centre, southern Ireland on October 2, 2014. Perched on top of a hill overlooking the Irish city of Cork, surrounded by a dated industrial estate, Apple's European headquarters is an unlikely base for the world tech giant -- now under growing scrutiny over its local tax arrangements. The company has been in Cork since 1980 but the European Commission's suggestion that its tax deal with Ireland may amount to illegal state aid has drawn new attention on the Irish link for the makers of the iPhone and the iPad. AFP PHOTO / PAUL FAITH (Photo credit should read PAUL FAITH/AFP/Getty Images)
Paul Faith—AFP/Getty Images

A bill expected to pass Ireland’s Senate on Wednesday would criminalize trade in products and services produced in Israeli settlements. If enacted, it could force U.S. firms with Irish divisions or subsidiaries to make a costly choice between violating either Irish law or U.S. law. If the companies refuse to join in Ireland’s boycott of such products, they could violate the new Irish law. But if they abide by the Irish law, they could violate U.S. law, which prohibits U.S. companies from participating in foreign boycotts that the United States government does not endorse.

The bill would prohibit Irish persons and companies anywhere from importing or selling items, or providing services, produced in “settlements” as defined by the bill. If an Irish-connected company located in or outside of Ireland, or an Irish citizen located in or outside of Ireland, were to import or sell a vegetable or cosmetic or “provide” a service produced in the settlements, they would be subject to punishment. Violators would be imprisoned for up to five years and fined up to 250,000 euros. No other country in Europe has such a law.

While the bill does not mention Israel or Palestine, Irish senator Frances Black and her cosponsors have declared that it was designed to prohibit transactions relating to Israeli settlers and settlements in the West Bank, East Jerusalem, and Golan Heights. Black previously signed a letter calling for a boycott of all Israeli products and services. Even though there are several contentious occupations closer to Europe—including Russia’s occupation of Crimea, Turkey’s occupation of Northern Cyprus, and Morocco’s occupation of Western Sahara—the Irish bill is drafted to apply only to Israeli settlements.

The bill, if enacted, would put at risk Ireland’s economic links to the United States, which are vital to Irish prosperity. The U.S. in 2017 accounted for 67% of all foreign direct investment in Ireland. Yet this bill could make U.S. companies with divisions or subsidiaries in Ireland, Irish companies with divisions or subsidiaries in the U.S., and their employees who are Irish citizens or resident in Ireland, choose between violating the Irish law or violating the anti-boycott provisions of the U.S. Export Administration Regulations. Violations of these U.S. anti-boycott laws are punishable by fines and by imprisonment for up to 10 years.

Some 700 U.S. companies currently employ over 155,000 people in Ireland. The companies include Apple (AAPL), whose Irish operations currently make it Ireland’s largest company. Google (GOOG), Microsoft (MSFT), and Facebook (FB) are now Ireland’s fourth, fifth, and ninth largest companies, respectively. All four of these leading U.S. companies also have sizeable research and development operations in Israel, relying on that country’s track record of cutting-edge creativity to help drive their own innovation.

One quarter of Ireland’s economic growth in 2017 came from Apple Ireland’s 119 billion euros in sales of Apple products. All Apple sales outside the U.S. are currently recorded through Apple’s Irish operations, making Apple the largest taxpayer in Ireland, worth billions of euros per year. Apple also employs around 6,000 persons in Ireland.

If the Irish bill becomes law, it could create problems for companies like Apple. Many components inside Apple’s iPhones are made in Israel. Apple’s second largest research and development office is located in Herzliya, Israel, and several key Apple suppliers are located elsewhere in Israel. If an engineer in Apple’s Herzliya office lives in Jerusalem, and telecommutes from home for a day, will Apple be at risk of providing a settlement service in violation of Irish law? While Ireland considers Jerusalem an Israeli settlement, the U.S. government recognizes it as Israel’s capital. If Apple fires an engineer because it wants to avoid problems with Irish law and he insists on telecommuting from his Jerusalem home, would Apple be violating U.S. law by participating in Ireland’s boycott of Israeli settlements?

In addition, U.S. law would require any U.S. company with operations in Ireland to report to the Internal Revenue Service on whether it has cooperated with Ireland’s boycott. Failure to make such a report would be punishable by a fine and imprisonment for up to one year.

Furthermore, U.S. companies in Ireland, and the 440 Irish companies doing business in the U.S., could be forced by the Irish law to run afoul of some or all of the two dozen U.S. state laws that require divestment from companies that boycott Israel (in some cases specifically defined to include Israeli settlements).

Aside from its implications for Ireland’s economy, the bill would hinder the prospects for peace between Israel and the Palestinians. By trying to impose a one-sided “solution” on Israel, it would encourage the continued refusal of Hamas and other Palestinian groups to reach a lasting compromise peace with the Jewish State.

U.S. companies are already feeling pressure to shift operations back to the United States, leading Irish commentators to express fears for the Irish economy. If it becomes law, Ireland’s settlements bill could serve as a tipping point for U.S. companies deciding whether to expand or even stay in Ireland. The Irish and any other government considering criminalizing trade with Israel should be aware that the anti-boycott provisions of U.S. law could mean that a boycott of Israel would result in painful costs to their own economic links to the United States.

Orde F. Kittrie is a law professor at Arizona State University, senior fellow at the Foundation for Defense of Democracies, and former State Department attorney specializing in sanctions.