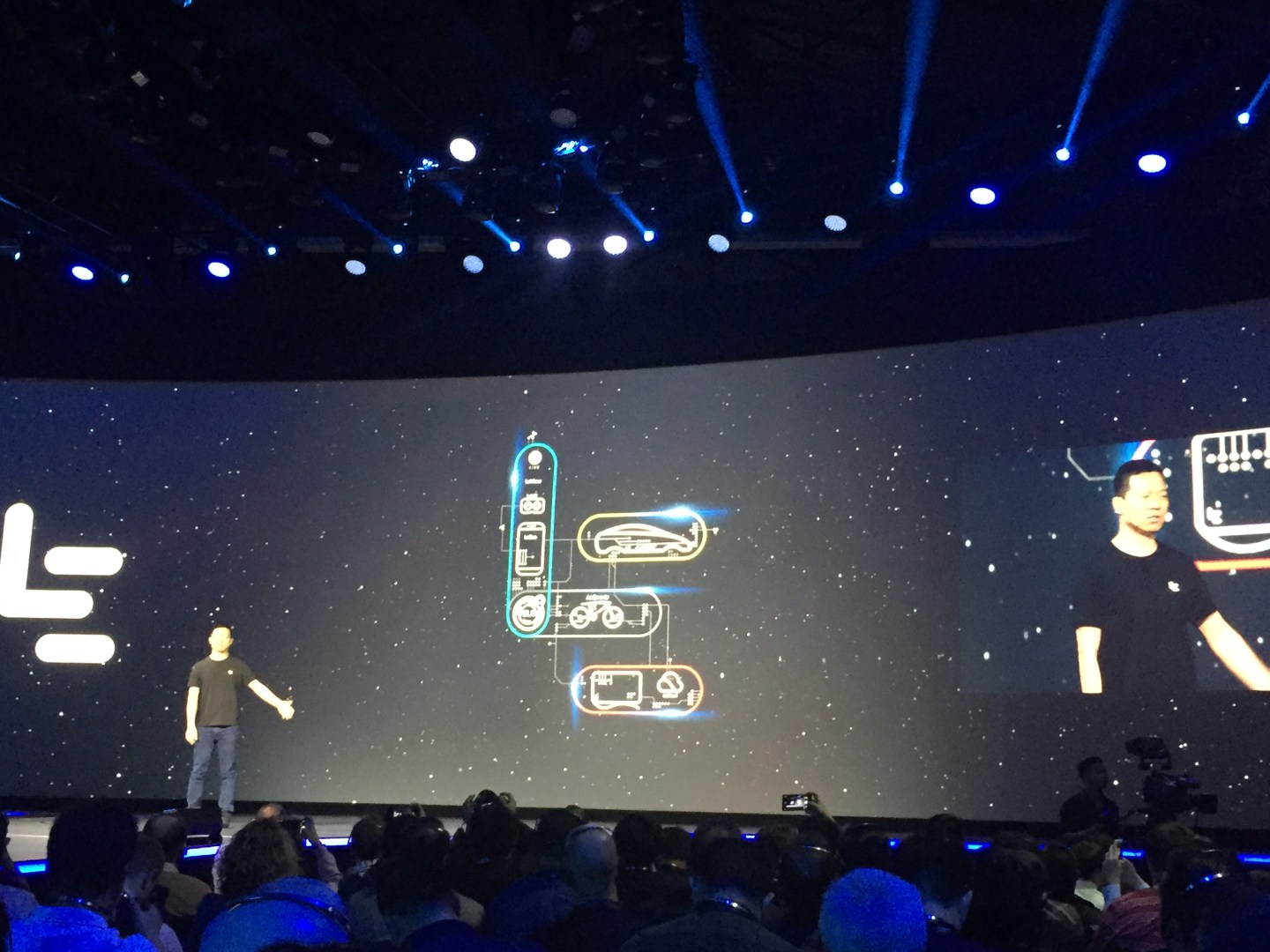 LeEco may not be well known in the U.S, but the Chinese technology company’s ambitious CEO Jia Yueting is on a quest to make it a household name.

LeEco held a press event in San Francisco on Wednesday that was intended as a sort of coming out party to U.S. consumers. During the talk, the 43-year-old Yueting laid out a surprisingly long list of areas that LeEco wants to dominate: big screen televisions, smartphones, online video streaming services, an online marketplace to buy its services, self-driving cars, virtual reality headsets, and Internet-connected bicycles.

At the lavish event, complete with a glowing runway, flashing lights, and a huge video screen, Yueting emerged onto the stage after running down the runway through a puff of smoke. Everything seemed to be going smoothly.

But during his speech, Yueting, speaking through a translator, explained that the company would not show off its LeSee electric concept car as planned. Three days prior the event, he had received news that the car got into an accident on its way from Los Angeles to San Francisco. The damage was apparently so bad that the company couldn’t repair it in time.

Fortunately, Hollywood director Michael Bay happened to be filming a movie in London featuring LeEco’s presumably even more powerful LeSee Pro self-driving vehicle. LeEco contacted Bay and then arranged the car to be shipped to San Francisco for the event so that Yueting could be autonomously driven onto the stage. But those plans fell through as the car would not be delivered on time for the spectacle to take place.

Yueting said the car eventually made it to the event, just not in time for it to be set up for Yueting’s entrance and speech. But media and analysts were able to look at it parked in a product showroom. Little details about the vehicle, resembling a grey sports car, were shared like when it would be available or how much it would sell for. Whenever it gets released, LeEco is sure to face tough competition with electric car maker Tesla.

He spun this debacle as an example of how the company’s “path of development has been a road to challenges” that it, of course, has overcome.

LeEco is also an investor in electric car startup Faraday Future, which Yueting said would be releasing its first production car next year at the Consumer Electronics Show.

In terms of others businesses, LeEco executives talked their decision in 2004 to get into the streaming video business in China with a Netflix-like service when, as they described it, many other companies thought it was a bad idea. Since then, LeEco went public on the Shenzhen stock exchange in 2010, which the executives explained made it the first Chinese video streaming company to do so.

The executives also talked about how the company followed up to video streaming by making televisions and then smartphones in China. Now the plan is to sell all of its products and services in the U.S..

LeEco’s North America chief revenue officer Danny Bowman called his company the “best kept secret in technology” and claimed that no other company has the wherewithal to get into as many businesses as LeEco. Bowman, who joined LeEco in March from Samsung, listed Apple (AAPL), Tesla (TSLA), Amazon (AMZN), Google (GOOG), and his former employer as “some of the world’s most innovative companies” that “can’t do what LeEco can today.”

While “others say LeEco is crazy to come to the backyards of these companies to get a piece of their pie,” Yueting said that his company would be able distinguish itself. Although Yueting bragged of the company’s complex business model, it would be a significant undertaking from a relatively-unknown company outside of China to steal customers away from more established businesses.

LeEco’s televisions, bicycles, smartphones, yet-be-detailed virtual reality headset, automobiles, and video streaming services can be all connected together through the company’s cloud computing service. From there, users would presumably be able to receive more personalized services or video recommendations as the cloud system collects data about their online behavior.

Companies like Google and Amazon already collect loads of consumer data and use that information to refine their services and create new ones, like voice-recognition software. However, they don’t all or haven’t said they will be selling the same type of devices like bicycles that LeEco wants to sell.

“America is the most important market for us,” said Yueting. “Once we get the hearts of minds of American users,” LeEco can expand globally, he continued.

One way LeEco plans to make inroads in the U.S. is by selling its products far cheaper from U.S. competitors. For example, the company’s new high-end UMax85 television will sell for $5,000 instead of $8,000 for comparable models, LeEco executives said.

Additionally, its new LePro3 smartphone will sell for $400 instead of $650 for comparable devices like Google’s new Pixel smartphone. With additional coupons and rebates, LeEco said that consumers could actually end up spending $300 for the new phone and $4,000 on the new television. The new products will be on sale through LeEco’s online marketplace starting on November 2.

But merely competing on price has been a challenge for companies in the past. Amazon’s Fire Smartphone, for example, while cheaper than higher-end models when it debuted in 2014, turned out to be a failure.

People who buy the new products will also get access for a limited time to LeEco’s video subscription service, which features shows from partner media companies like Lionsgate, Showtime, and the Lifetime network. Still, success in the U.S. depends on challenging strong incumbents with big head starts like Netflix, Amazon, and video streaming service Hulu.

“We firmly believe that our model represents the future,” said Yueting.