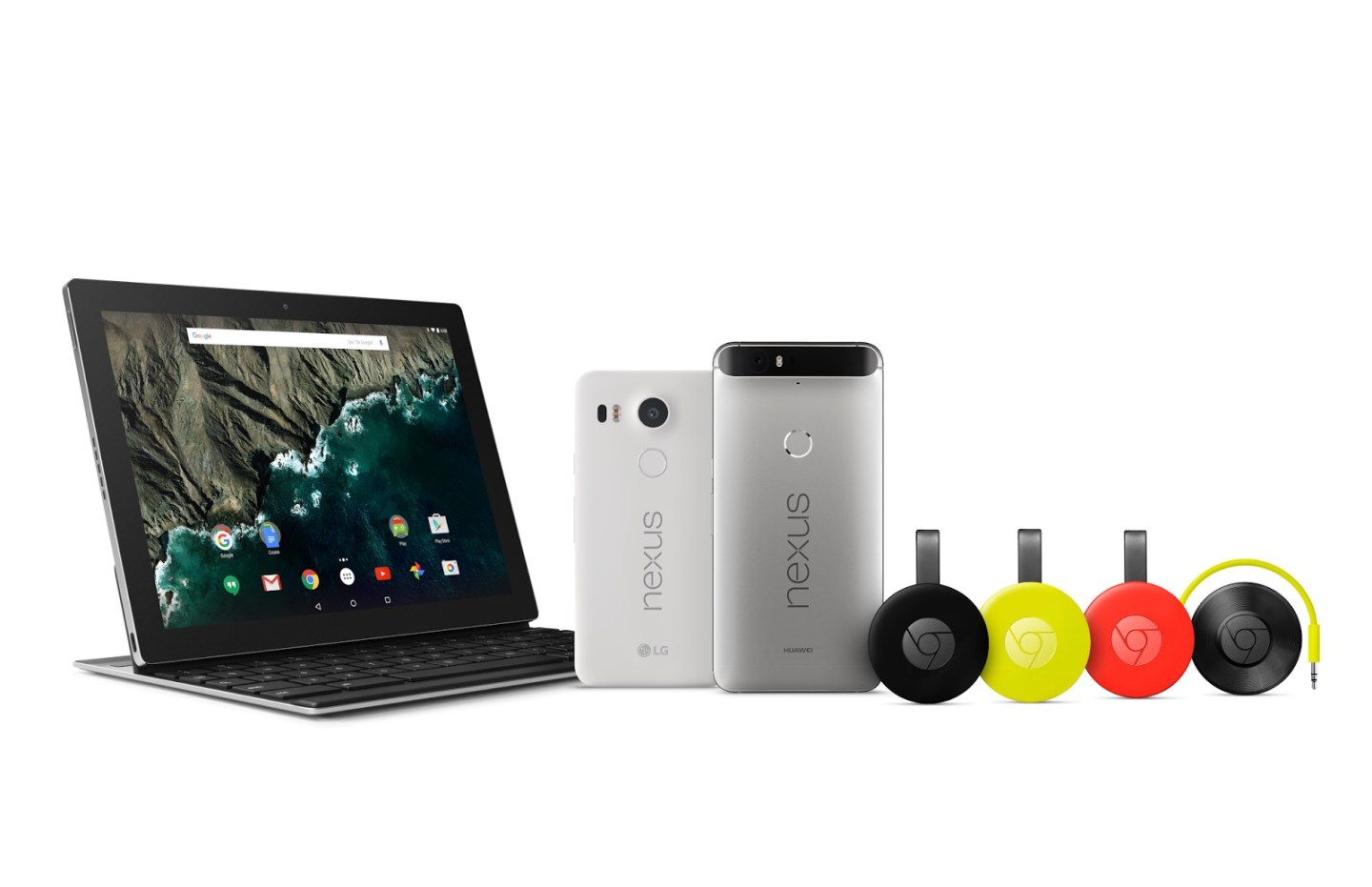 As previously reported, the new Chromecast improves Wi-Fi capabilities, and brings Google’s streaming solution to speakers for the first time. Both devices are available today for $35.

As expected, Google revealed two new Nexus smartphones at its annual event. Both devices, now available for pre-order, will begin shipping in late October and come with Android 6.0 Marshmallow pre-installed.

The LG-made Nexus 5X is the less expensive of the two, starting at $379 for a 16GB model. Beneath the device’s 5.2-inch, 1080p high-definition display is a Qualcomm Snapdragon 808 processor and 2GB of RAM. Users will also have the option to double storage to 32GB for an additional $50.

Both devices have a USB-Type C port for charging, a fingerprint reader on the back, a 12.3-megapixel rear camera, and quick charging capabilities.

Instead of placing the phone’s fingerprint sensor on the front of the device, as Samsung (SSNLF) and Apple (AAPL) have traditionally done, Google opted to place add it to the back of the device. Officially called Nexus Imprint, the sensor sits slightly below the phone’s camera where your fingers would naturally fall when holding the device. Meaning you can hold your device as you always do, placing your index finger on the sensor to unlock the device without having to adjust your grip.

The first time I picked up both new Nexus devices, I found my index finder did indeed naturally gravitate to the fingerprint reader’s location. From the few brief demos I witnessed, the sensor quickly, and accurately, read a fingerprint every time. Although, Google claims the sensor will get smarter the more you use it, learning more about your fingerprint based on the direction and angle your finger is placed on the sensor.

After picking up the Nexus 5X, I immediately noticed how light it felt due, in part, to its polycarbonate housing. The Nexus 6P, on the other hand, was slightly heavier more likely to withstand a drop thanks it its aluminum housing.

A protruding camera bump on the backside of the Nexus 5X isn’t anywhere near as pronounced as it appeared in leaked renders. The same can be said for the top of the Nexus 6P—where the phone’s camera is only a slightly thicker. I’d need more time with both devices before making a final decision about which smartphone I would purchase, but I’m currently leaning towards the 5X simply because it’s the smaller of the two devices, although it does feature slightly lower specifications.

A small, but welcomed, side note is that both new Nexus devices will work with Google’s Project Fi, expanding the device lineup for the experimental carrier beyond that of the Nexus 6.

Meanwhile, current Nexus devices will begin receiving an Android 6.0 Marshmallow update starting next week. The update includes improved battery life, a contextually aware personal assistant in the form of a new feature called Now on Tap, and a refined interface.

The biggest surprise at the event was when Google revealed its new Pixel C tablet. However, don’t let the name confuse you, the Pixel C will run Android, not Chrome OS.

Unlike the Nexus line, where Google works in partnership with hardware partners to design and manufacture smartphones, the Pixel line was designed and built exclusively by the tech giant. “It’s a Google device through and through,” a Google representative told me after the event.

The Pixel C is similar in appearance to Apple’s iPad Air 2, and features a slightly larger screen (10.2-inches vs. 9.7-inches). It’s aluminum housing lacks any of the usual branding or logos you’d find on other tablets.

Google will start selling the Pixel C later this year, with a starting price of $499 for 32GB of storage (the 64GB model will set you back an additional $100).

Additionally, Google also developed its own $149 keyboard to accompany the Pixel C. A series of strong magnets are used to attach the keyboard to the Pixel C, while a hinge allows users to adjust viewing angles.

When not in use, you can place the keyboard over the Pixel C’s screen, which serves to protect the screen from damage, and charge the device’s keyboard.

Unfortunately, my time testing the keyboard was limited due to connectivity issues. For the most part, the keyboard felt similar to the MacBook Air, in terms of key space and travel.

The biggest question I have is: Why release an Android tablet now? ChromeOS has become increasingly easier to use, and Android tablets are known for offering a subpar user experience due to lack of app support and overall functionality.

Perhaps we’ll see some form of tablet optimizations for Android tablets as the Pixel C gets closer to release. Google did promise it would update the software on the Pixel C every six weeks.