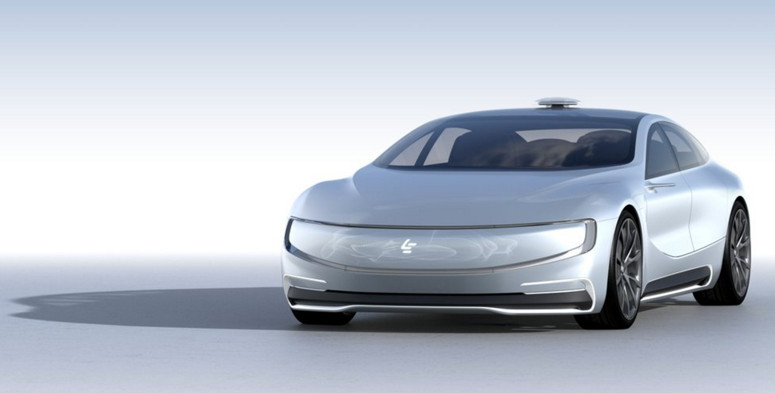 The concept car, named LeSee, is an all-electric sedan that can (theoretically) reach a top speed of 130 miles per hour with automated driving capabilities. It was designed to be owned or “shared” as part of a fleet of vehicles that can be ordered via a smartphone app, according to Lei Ding, global vice chairman of LeEco and managing director of the auto division, dubbed SEE, or the Super Electric Ecosystem Plan. Ding introduced the LeSee car on Wednesday.

“The strength of the Internet company LeEco is building a new era for automotive industry,” said Ding during the event, which was livestreamed and translated into English via its Facebook page. “We’re not just building an electric vehicle that’s smart. Instead, what we are doing is to build a new mobility for the future.”

What does that mean, exactly? From the details that were provided during Ding’s presentation, it appears the car will provide Internet-connected services through native apps. The company is also building an “auto cloud,” which we can only assume means to will use cloud computing.

The concept car was designed in such a fashion so that it will be easy to order and then share, all through a smartphone app. A smart screen on the car will illuminate and indicate if it’s available or not, Ding said. “We believe the traditional way of car ownership should change, using social resources,” he added.

The concept car also sports a steering wheel that can fold away when the automated driving function takes over.

Of course, this is a concept car, not a production vehicle. It’s not clear how Aston Martin, which set up a venture with LeEco in February, will be involved. It is also unclear if this will be treated as a separate project from Faraday Future. But it’s a lot closer to being a viable car than what Faraday Future displayed in January at CES, the annual consumer electronics industry trade show in Las Vegas.

This electric car can go from zero to 60 mph in under three seconds. Watch:

Faraday Future has left many media and industry experts perplexed and skeptical about its plans to build an electric car promising will change the way people travel. When the company unveiled its FFZero1, a futuristic, single-seat electric vehicle concept car with an embedded smartphone in the steering wheel, it was lampooned by critics. The car and splashy unveiling was meant to reinforce the idea that the company had a transformative vision and a deep pool of talent. It has also emphasized these ties through its owner, Jia Yueting, founder of LeEco.

That event didn’t illuminate any clear direction the company was taking, and it failed to answer many critical questions. Some questions have continued even after Faraday Future officially broke ground on a factory earlier this month in North Las Vegas, Nevada.

“We’ve gone from being laughed at, being judged, to being trusted by people,” Ding asserted during the presentation.

Ding also provided a few details about Faraday Future’s factory along with making a few comparisons to all-electric automaker Tesla. He specified the Faraday factory will have 600 robots working, compared to “Tesla’s 150 robots,” and that the company has teams working in Germany, Silicon Valley, and Beijing on autonomous driving.