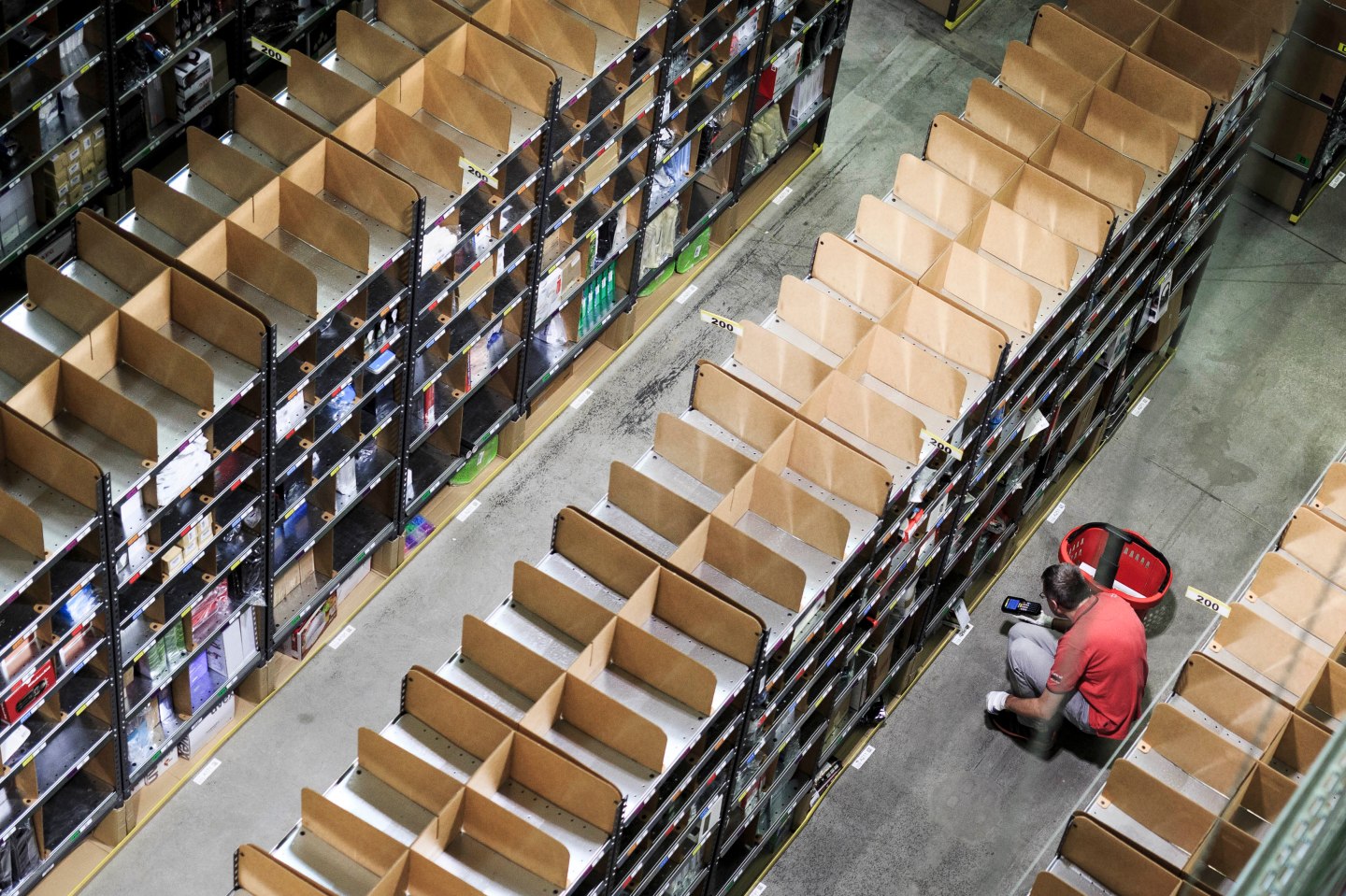 BRIESELANG, GERMANY - NOVEMBER 17: A worker fills inventory among shelves lined with goods at an Amazon warehouse on November 17, 2015 in Brieselang, Germany. Germany is online retailer Amazon's second largest market after the USA. Amazon is currently in a standoff with several book publishers over sales conditions and prices for e-books, and hundreds of authors in the US and Europe have written letters in support of the publishers. (Photo by Carsten Koall/Getty Images)
Carsten Koall — Getty Images

Americans looking for a few extra hours a week of work this holiday season won’t find any more opportunities in stores than they did last year.

U.S. retailers will hire some 738,800 extra part-time workers from October through New York’s, on par with 2015 levels, according to a forecast by outplacement firm Challenger, Gray & Christmas. (And reflecting retail’s lost decade, that is slightly below hiring numbers from a decade ago.)

The first major retailer to announce its seasonal hiring plans, Target (TGT), said it would hire 70,000, the same as last year. But in a clear sign of the times, hiring in warehouses and fulfillment centers that support Target’s e-commerce will rise to 7,500 people. While other major retailer have yet to announce their holiday staffing plans, Target’s moves hint at a continuation of last year’s trends: Macy’s (M) for instance lowered its in-store hiring in 2015 while increasing part-time e-commerce fulfillment hiring 20% to 12,000 people. According to data compiled by Challenger, Gray & Christmas, Amazon (AMZN) doubled its holiday season hiring between 2012 and 2015.

“The sector with the biggest increase in holiday hiring in recent years has been transportation and warehousing, as more and more holiday shopping is done online,” CEO John Challenger said in a statement.

It’s not entirely surprising to see retailers do that. Though 90% of holiday season spending is expected to take place in stores, retailers need to invest in e-commerce to compete with Amazon.com. Target, for instance, told Fortune this week it would equip more than 1,000 stores to help ship e-commerce orders, up from 460 last holiday season. And Walmart (WMT) has opened more distribution centers.

At the same time, with store traffic down for many retailers like Target and Macy’s (Walmart is an exception among major stores to see rising store traffic), retailers are mindful of protecting their profit and being careful about not over hiring. Target for instance, has managed to boost profit per share despite unchanged comparable sales in the first half of this fiscal year. Of course that could blow up in any retailer’s face: in-store customer service is essential to giving shoppers a reason not to shop at Amazon, and poorly staffed floors are likely to disappoint shoppers.

What’s more, keeping costs in check is getting harder with a tighter labor market and minimum wage hikes in a number of states.

Still, unchanged store hiring levels would be a step up from the last two years, when holiday staffing fell 1.5% in 2015 and 4.8% a year earlier. That probably has to do with more optimism from analysts about the upcoming Christmas period’s prospects: RetailNext said this week holiday season retail sales should rise a healthy 3.2%, while the National Retail Federation in July raised its 2016 sales forecast in anticipation of continued improvement in consumer sentiment.