Why This CEO Is Publicly Bashing Trump 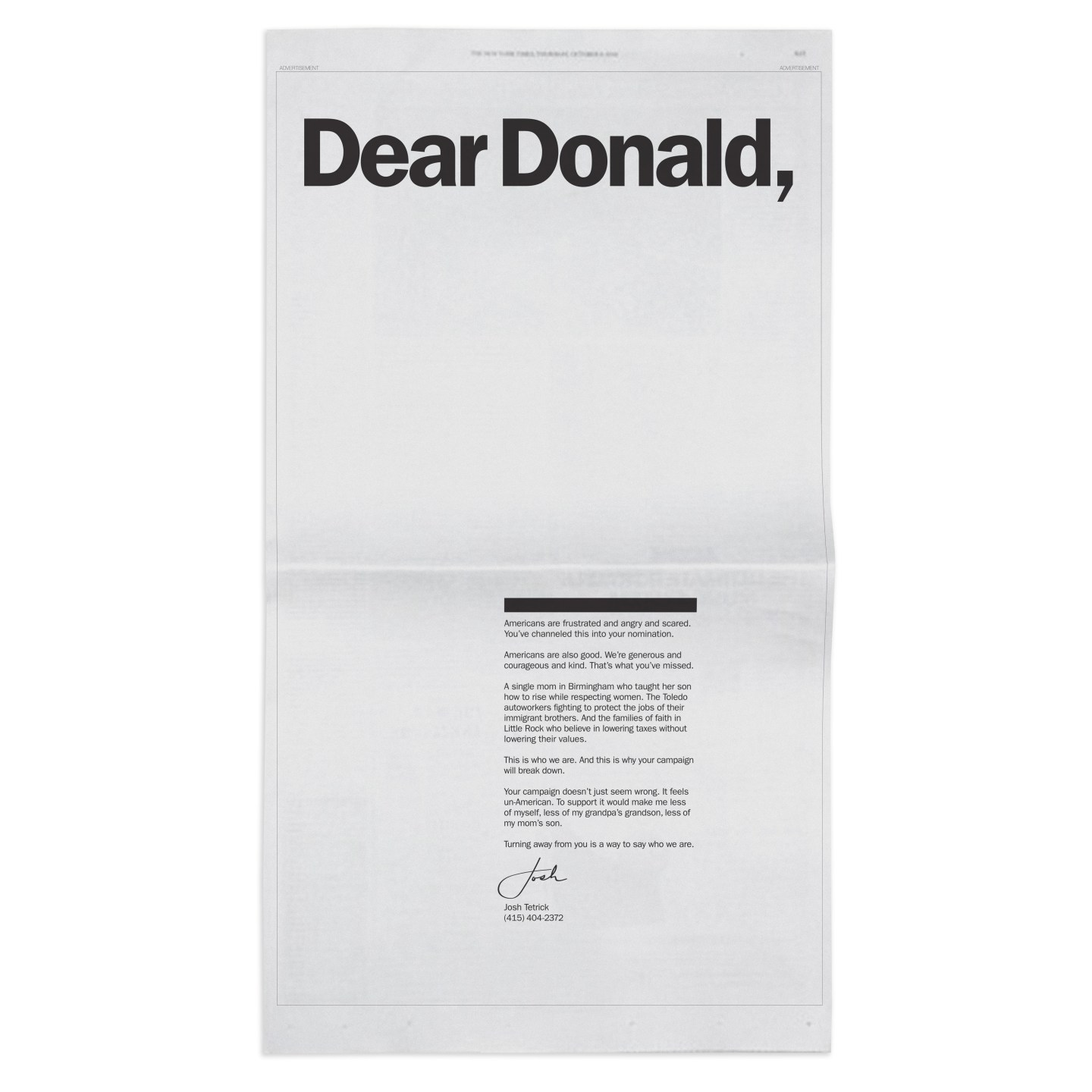 Political advertising season is in full swing, but this morning readers of the print versions of The New York Times and Cleveland’s The Plain Dealer saw an unusual one: a full-page ad taken out by Hampton Creek and signed by the San Francisco-based startup’s CEO Josh Tetrick.

The text of the ad, addressed to “Dear Donald,” said that, “Americans are frustrated and angry and scared. You’ve channeled this into your nomination.” It concludes with: “Your campaign doesn’t just seem wrong. It feels un-American. To support it would make me less of myself, less of my grandpa’s grandson, less of my mom’s son,” and is signed by Tetrick. (Click here to read the full version.)

Tetrick said that the letter was not about policy but rather values like inclusion, tolerance, and equality—“simple things that are inarguable that I think we’re not being clear enough on,” Tetrick tells Fortune.

Hampton Creek sells plant-based food products—its flagship is Just Mayo—that are meant to be better for the planet and consumers’ health. Tetrick says he started his company because he wanted to move the world forward in positive ways. “I wouldn’t feel comfortable going to bed at night if I didn’t say something,” he says.

Fortune reached out to the Trump campaign for comment, which did not respond in time for publication. Fortune will update this story if it receives a response.

The letter from Tetrick, ahead of this week’s Republican convention in Cleveland, is a highly unusual public attack on a presidential nominee from a CEO. But U.S. executives are becoming increasingly vocal in their concerns about a Trump presidency.

The ad follows an open letter published last week that was signed by more than 100 technology CEOs, founders, and executives. The text of letter said that the group believes “in an inclusive country that fosters opportunity, creativity and a level playing field. Donald Trump does not.” The group concluded after listening to the presumptive Republican presidential nominee for the last year that “Trump would be a disaster for innovation.”

Tetrick says he never would have run the letter during the 2012 Obama-Romney election. “It never would have gone through my head,” he says. Tetrick, who grew up in Birmingham, Ala., says he has lots of friends and customers who are Republican. “What I don’t think is a good conversation is whether we should be racist or not, demagogues or not, whether we should have some form of common decency or not,” he says.

The letter is not without its risks. The company has been working with senators on both sides of the aisle on agricultural and food industry legislation. The company has also prioritized mainstreaming its products rather than selling them to the health food demographic. When asked if the letter could hurt sales, Tetricks says, “It might,” adding that he “would feel sick if I didn’t do anything.”

Tetrick decided to run the letter last week after telling a friend he wished leaders would speak up more about Trump. “She said, ‘Yeah, why don’t you do that,’” Tetrick recalls.

Tetrick, who included his cellphone number in the ad, said he was receiving a text message about every 10 seconds. Tetrick says one of those texts came from Democratic Senator Sherrod Brown of Ohio, and that neither he nor the company has heard anything from the Trump campaign.

This is not the first full-page ad from the company in The New York Times. The company ran a series of ads in the paper earlier in the election cycle addressed to Obama and the presidential candidates that challenged them to help fix the food system. All of the ads have been paid for by Hampton Creek, not Tetrick.

Tetrick says he has become more vocal and outspoken on issues that matter to him after a diagnosis six years ago of hypertrophic cardiomyopathy, a disease in which it’s harder for the heart to pump blood. It made him reprioritize his life. “It forced me to do the things that matter and are important,” he says.