The 15 Best Workplaces in New York 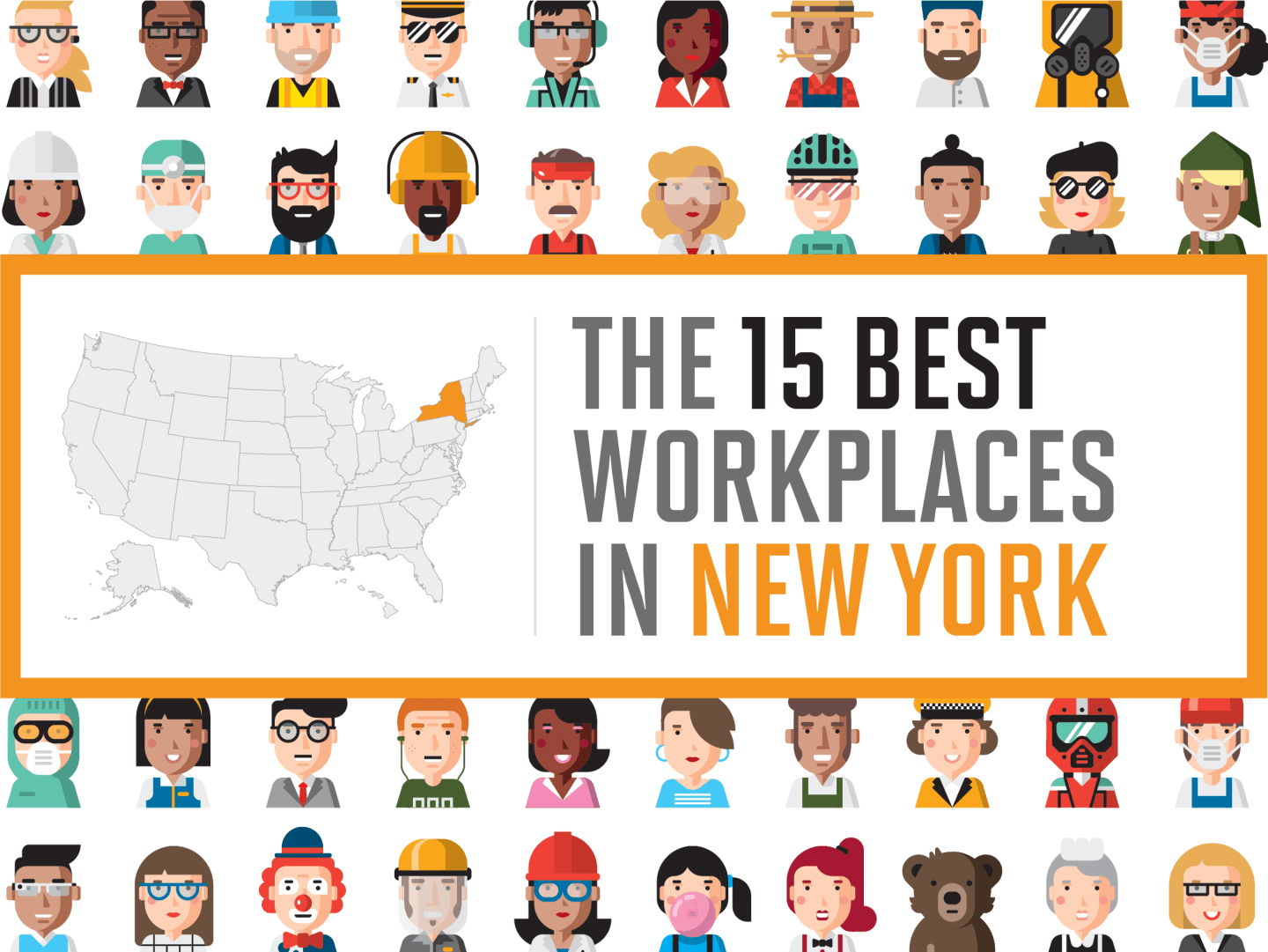 Of the companies that appear on Fortune’s list of the 100 Best Companies to Work For, there are 15 with a significant presence in New York — and each one counts 500 or more employees in the state. Find out who ranks highest and see the top cities in New York where they employ the most workers.

On our list since 1998, this family-owned and operated supermarket chain now has more than 88 stores in the Northeast, with more than a dozen new ones on the drawing boards (including one slated for the Brooklyn Navy Yard). Yet, it has maintained a family feel. Says one worker: “Management cares about its employees and always asks how we are doing when we come into work or are just shopping.” Employees are able to submit changes pertaining to their availability and scheduling by logging into the company’s online system, and may take unanticipated time off as needed by talking with their manager. Wegmans also promotes employee wellness with immunizations, yoga sessions, cooking classes, and a Store Wellness Champion at each location, where a pharmacist does health screenings and cheers employees on as they make healthy changes.

To encourage employees to focus on the greater purpose in their work, this Big Four accountancy launched a “10,000 Stories Challenge,” in which staff members created poster stories to highlight the positive impact of their work. Offices with the highest participation rate received $20,000 each to donate to charity. KPMG is also a leader in promoting women in the workplace, starting with the election of Lynne Doughtie to a five-year term as Chairman and CEO of the U.S. arm of the global firm starting last July. The company also has a Women’s Advisory Board that influences succession planning, a Network of Women that consists of 65 chapters, and Lean-In circles. Read: KPMG’s Viral Morale Meme

Global hotel chain has spent an average of $50,000 updating employee cafeterias to make them feel more like restaurants. Every hotel now has a lounge where colleagues have access to computers, TVs and video games. From the CEO on down, everyone at Hyatt is on a first-name basis, and hotels regularly host “Night Owl Breakfasts” when managers serve meals to night-shift workers, share information and gather feedback. During the past 12 months, Hyatt chose to promote an internal candidate more than 47% of the time.

As long as they work at least 20 hours a week, all employees at this Big Four professional services firm who use flexible work arrangements are eligible for full-time benefits. The company has promoted more than 250 partners, principals, executive directors and directors who used flexible time. An unusual, and hopefully little-used, benefit: When an employee passes away, the company immediately sends either four months’ salary or $50,000, net of taxes, to help the person’s family deal with costs. The company also provides survivors a full year of access to EY’s personal financial planners to help with managing the estate.

The Wall Street firm’s employees love working here, hence its presence on the list every year since since it was first published in 1998. Money is one reason; wellness is another. The firm has an on-site fitness center and a medical clinic staffed with doctors, nurses, dermatologists, gynecologists and physical therapists. In recent years the company has been holding a Resilience Week featuring speakers who discuss such topics as “Happiness and Stress.”

Employees rave about this Big Four accounting firm’s flexible scheduling program: one mother of three was recently made partner while working part-time. To help new moms and dads cope with their transition, PwC has just started offering them 30 days of paid parental leave. For interns who have secured full-time offers from PwC, they are welcomed to the company at a launch event at Disney World theme parks, where they compete in fun challenges like a puzzle game called Pirate Pursuit. Meanwhile, PwC also challenges staff members in unique ways. They’ve encouraged employees to think deeply about diversity, with training on topics like hidden biases and its thought-provoking “PwC Talks” series, which encourages employees to “get comfortable with being uncomfortable.”

Women represent 51 percent of this hotel chain’s U.S. employee population — and 52 percent of non-executive managers. The company has a Women’s Mentoring Program and a Women’s Team Member Resource Group, which hosts special events for women’s leadership. Starting in 2016, the company is surging ahead of the industry by ramping up paid leave to two weeks for dads and adoptive parents — and giving moms ten weeks off following childbirth. Read: This Is What Makes Hilton a Great Place to Work

Rapid growth at this biotech company, including the 2014 launch of the Regeneron Genetics Center and recent establishment of two Irish offices, has created new job opportunities and lots of interest. Regeneron entered this year with 157 job openings, looking for quality assurance specialists and process scientists to look after a stable of treatments and products. The company’s four FDA-approved treatments — including a LDL-cholesterol lowering medicine approved last summer — and a growing investigational pipeline are entirely homegrown in the company’s labs, and a strong team of innovative scientific thinkers are leading the way in pioneering ways to improve the health of patients.

Anyone who shops at the country’s leading natural food supermarket chain knows it is passionate about its mission of selling organic food, GMO labeling, and animal welfare. Many employees (called “Team Members”) say this mission aligns with their personal beliefs. Whole Foods Market strives for an egalitarian culture and caps its executive salaries at no more than 19 times that of the average worker. The company’s unique gain-sharing plan rewards teams for coming under budget. The team’s monthly surplus is distributed among team members—based on number of hours worked—and has averaged about 6% of workers’ total wages. “Getting that extra boost of money when you work on a great team and know that you have earned it is a great feeling,” says one employee.

Marriott has been adept at bringing new brands into its tent, and none bigger than the pending deal with Starwood Hotels, custodian of the Westin, Sheraton, St. Regis and W chains of hotels. The acquisition of Starwood later this year will make Marriott the world’s largest hotel company, with a global workforce of more than 300,000 working in more than 5500 hotels. New talent will see a company that has a strong promote-from-within tradition, and a diverse team with one of the largest groups of minority employees in U.S. business. No wonder that nearly a third of U.S. employees have been with the company for more than 10 years, and 12 % have been here for more than 20. Those that exceed 25 years are eligible for free weekend stays at participating Marriott hotels for the rest of their lives. Read: Why Employees Love Staying at Marriott

The global professional services company has committed to hire 5,000 U.S. veterans and military spouses by 2020. The company is waiving its standard college-degree requirement for some positions and has set up special training courses for military candidates. Once in the door, Accenture employees can receive educational scholarships and all employees have access to a global learning portal with more than 50,000 classes. New hires learn the ropes in part by playing “Sky Journey,” a mobile game in which players manage and operate a virtual business. Read: Accenture Hired 90,000 Millennials Last Year

Sensational growth — revenue has doubled over past eight years — has created many opportunities for employees of this supplier of data for investment professionals. “FactSet is a great place to launch a career,” one employee told us. “Young people are given training, mentorship and a lot of responsibility early on.” They also get 100% coverage of health insurance premium, on-site yoga, manicures and pedicures. Employees like it so much they don’t want to leave; the company boasts a whopping 90% retention rate.

Professional services firm made history in 2015, becoming the first Big Four accounting firm to crack the glass ceiling by appointing a woman, Cathy Engelbert, as CEO. Deloitte’s big draw is education: four million learning hours were delivered to employees last year with special development programs in place to advance those traditionally considered “minorities.” (Women and minorities currently represent nearly half of management.) All employees are supported in pursuing higher education: $10K in tuition reimbursement and $25K to help doctoral candidates cover expenses to write their dissertations. Select MBA candidates who return to Deloitte after business school can qualify for a reimbursement on their graduate school tuition.

The financial services giant, a 16-year veteran of this list, is going through a rough spell and expects to have layoffs this year as a result of cutting $1 billion in costs by 2018. AmEx says less than 20% of staff will be affected. The company returns to the 100 Best Companies list this year with strong comments from employees, who tout its strong programs supporting working parents. AmEx offers 40 days paid maternity leave, 30 days for new fathers and adoptive parents. Surrogacy benefits were doubled in the past year to $10,000, on par with adoption benefits. A Fatherhood Breakfast series has been held for the past five years, giving employees an opportunity to hear from leaders in the company on how they balance work with raising a family.

To see the full list of this year’s best employers in the U.S., visit fortune.com/best-companies, where you can also find job searching tips, career advice, and secrets from recruiters on how to get hired.