The 10 Best Workplaces in Texas 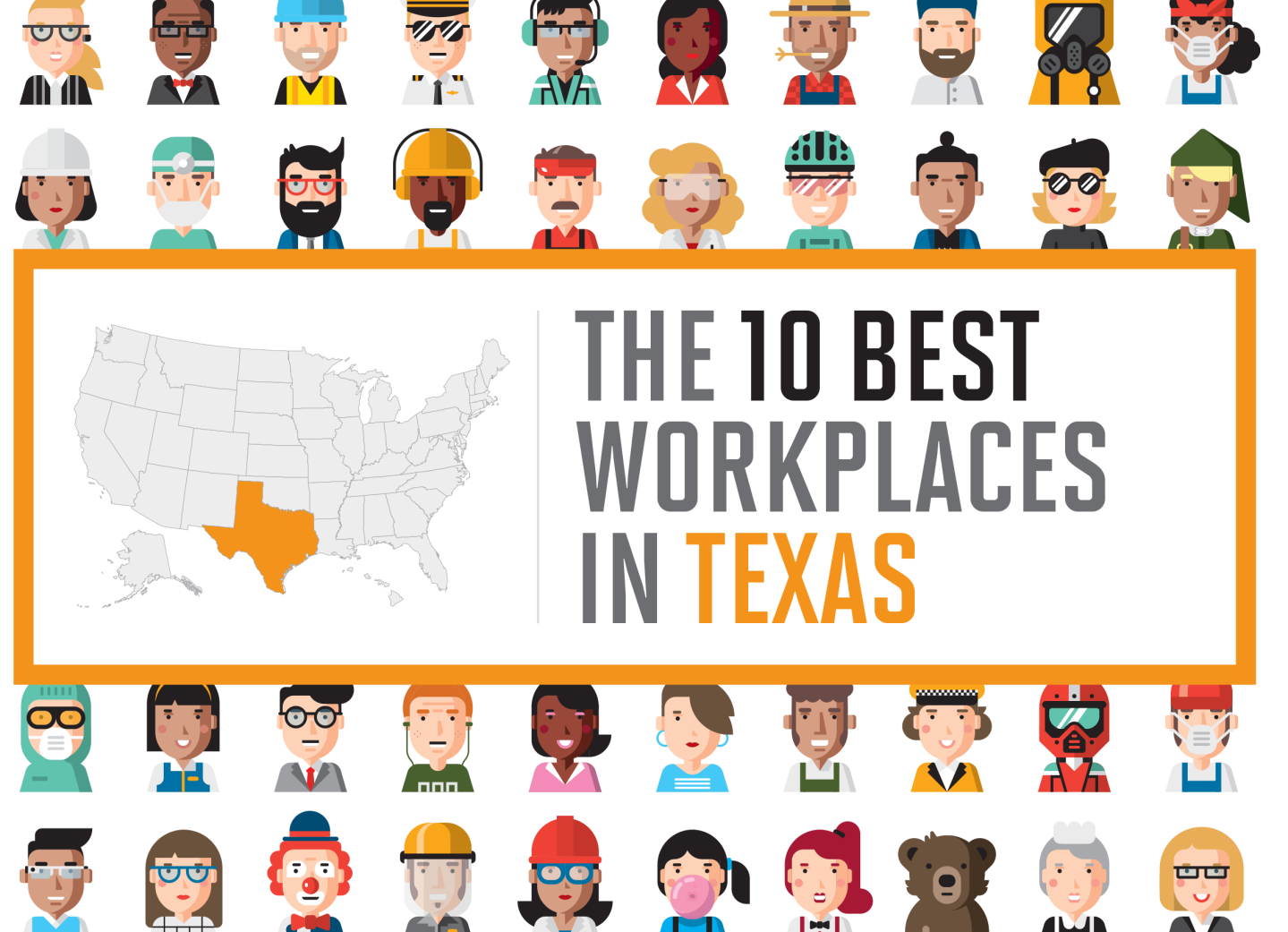 Of the companies that appear on Fortune’s list of the 100 Best Companies to Work For, only 10 are based in Texas. Find out who ranks highest and see the top five cities where they employ the most workers.

One of the nation’s largest apartment complex managers (more than 62,000 units at 180 sites) has also been one of the most successful REITs (real estate investment trusts). When one of their investments paid off especially well, the firm shared with employees in the form of a “HaveFunD Bonus.” Every employee got a cut—with amounts based on tenure, averaging over $5,000 per employee. Even the three newest team members hired that week got $1,000. After the loot was delivered, two employees won all-expense-paid trips for themselves and a guest to the Super Bowl—for submitting their stories of how they spent their bonuses.

The retailer of storage solutions and home-keeping hires only about 3% of applicants, but those who make the cut are rewarded with higher-than-average pay and a fun-loving culture, with traditions like “We Love Our Employees Day,” chili cook-offs, and a soap box derby. Every part-time worker has access to health insurance, and based on employee feedback, the company recently lowered the amount workers have to kick in for co-pays and deductibles.

This upscale custom homebuilder flies every new employee into Houston for Weekley 101: two days of Jeopardy, building and selling Lego homes, and learning Weekley-isms (saying “growth review” rather than “performance evaluation,” or “owner’s retreat” rather than “master bedroom,” or “retreat area” rather than “gameroom.”) A big hit at these sessions is a video skit in which the CEO, posed in tights and a cape, leads new hires on a journey through the history of the company. They explain: “The video is a glimpse into the zany culture we take pride in.” After only a year of service, new employees become eligible for 10% off the price of a new home, saving them up to $40K on their real estate investment.

Carved over the entrance of the San Antonio headquarters of this oil pipeline and terminal operator are these words: “The Best is Yet to Come.” NuStar employees are appreciated for their efforts and achievements with gifts, parties and recognition events, and are given perks like 100% healthcare coverage, a rich 401(k) and defined benefit pension plan, company-wide bonuses, and 60 hours of paid-time-off to volunteer. Chairman Greehey calls NuStar’s no-layoff policy a “sacred trust,” and says that as long as employees do a good job, they will have a good job.

“When Hilcorp Wins, We All Win!” is more than a catchy slogan. Five years ago, CEO Jeff Hildebrand proclaimed that if the oil and gas producer reached several daunting goals (doubled its equity value, net production, and reserves), he was going to give everyone $100,000. Sure enough, the goals were met, and the president hand-delivered personalized suitcases with their checks for $100,000 (prorated for those hired more recently). This was not the first time for such largess. In 2011 Hilcorp employees received a pro-rated $50,000 voucher to buy their “dream car” after the company met its previous five-year goals.

Football-fanatic employees scored last year when this financial institution serving military families became the official Military Appreciation Sponsor of the NFL. In Phoenix, USAA employees and NFL Pro Bowl players helped refurbish a park; in Denver, employees and the Broncos hosted nearly 100 military members for a first-ever event to bring the military and the NFL together. In Washington, D.C., employees made the dreams of fans come true when they were able to meet the starting quarterback of their team. Last year Stuart Parker, an 18-year USAA veteran who flew C-141 combat missions during Operation Desert Storm, kicked off his promotion to CEO with a coast-to-coast tour for face time with employees.

This faith-based health network treats some 1.7 million patients a year at its 25 hospitals in the Dallas-Ft. Worth area. Texas Health Resources trains employees to serve as “Promise Coaches” to help mediate conflicts, and promotes community-giving and departmental team-building by encouraging employees to volunteer together. After international rescue organizations placed a large number of Burmese refugees in the Dallas area, the company established a dedicated clinic for this population, training employees on Burmese culture, hiring an in-house interpreter, and serving Burmese meals.

Rules of communication at this employee-owned construction company are the following: “No rank in the room,” “Everyone participates — no one dominates,” and “Listen as an ally.” Employees are called “partners,” and everyone is on a first-name basis. No partner also owns more than 4% of the company, which has been engaged in some large-sized projects. TD installed over 1,300 plumbing fixtures when they helped build the Dallas Cowboys stadium, and to test them, they had to be flushed all at once. TD partners are looking forward to their next “Super Flush” at the new stadium for the Atlanta Falcons.

One of the nation’s largest home healthcare organizations, Dallas-based Encompass makes its first appearance on our list. With more than 7,500 employees operating out of 210 locations, Encompass staff make more than 2 million patient visits a year. CEO April Anthony established the Encompass Cares Foundation which offers employees and retirees the opportunity to participate in medical missions in their own communities and throughout the world. International mission trips have gone to Honduras, Haiti, Uganda, and Kenya.

Anyone who shops at the country’s leading natural food supermarket chain knows it is passionate about its mission of selling organic food, GMO labeling, and animal welfare. Many employees (called “Team Members”) say this mission aligns with their personal beliefs. Whole Foods Market strives for an egalitarian culture and caps its executive salaries at no more than 19 times that of the average worker. The company’s unique gain-sharing plan rewards teams for coming under budget. The team’s monthly surplus is distributed among team members—based on number of hours worked—and has averaged about 6% of workers’ total wages. “Getting that extra boost of money when you work on a great team and know that you have earned it is a great feeling,” says one employee.

See the full list of Fortune’s 100 Best Companies to Work For at fortune.com/bestcompanies, where you can also find job searching tips, career advice, and secrets from recruiters on how to get hired.