The 16 Best Workplaces in Florida 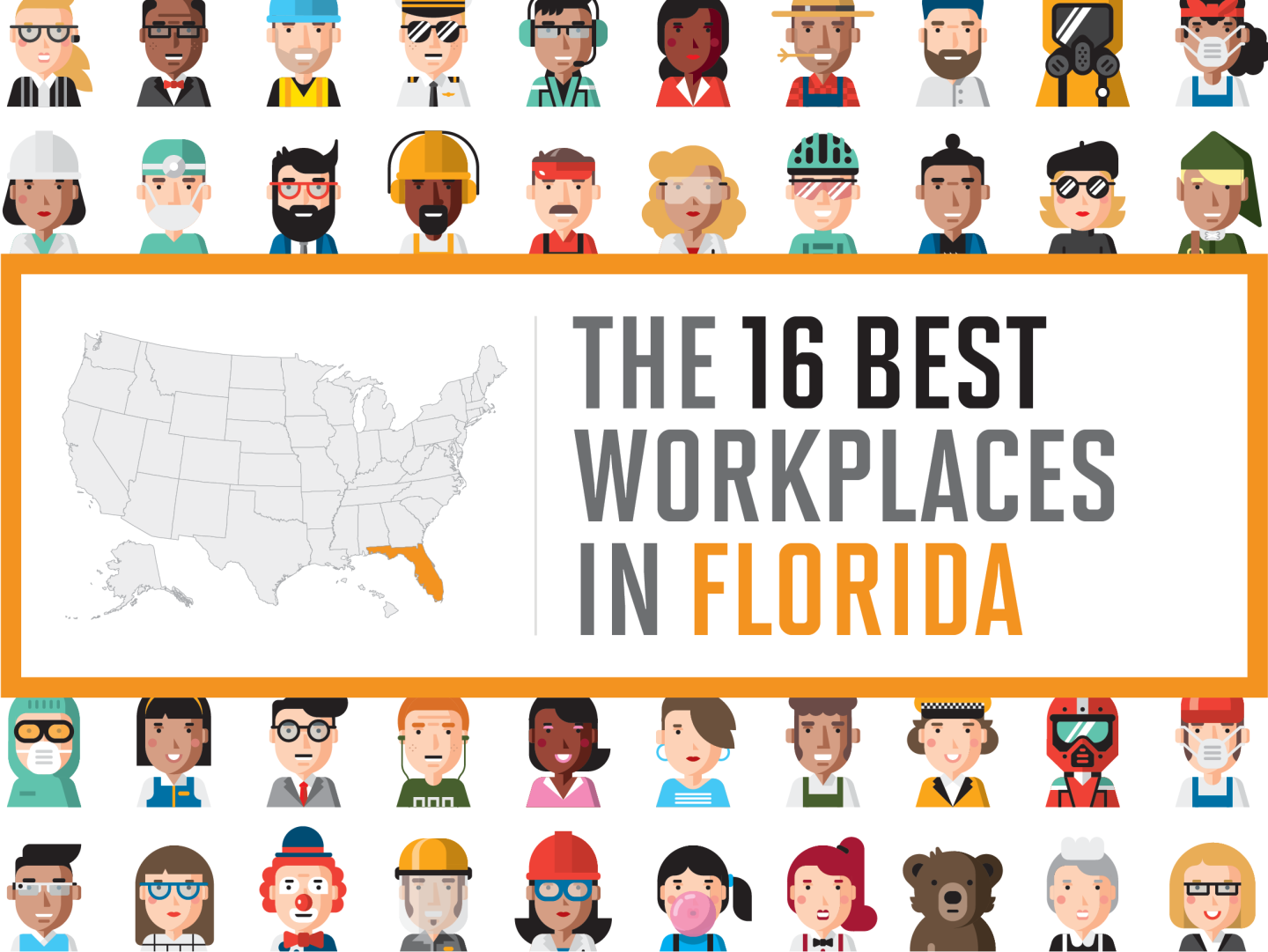 Of the companies that appear on Fortune’s list of the 100 Best Companies to Work For, there are sixteen with a significant presence in Florida — and they each count 500 or more employees in the state. Find out who ranks highest and see the top cities in Florida where they employ the most workers.

Scott Scherr, founder and CEO of this cloud human capital management company, is regarded as a hero by employees, all of whom are made stockholders when they join the company. With the price of the stock escalating by more than 1,000% since the end of 2008, many of them have enjoyed the rewards of gains in stock value. Ultimate also has what is arguably the most generous 401(k) plan in the business world: the company matches its employees’ 401(k) contributions at a rate of 40% at every pay period, with no cap on that amount To top it off, the firm continues to pay 100% of the health insurance premium for all employees and their dependents.

This chain of boutique hotels and restaurants offers a buffet of benefits that includes six weeks of parental leave, hearing and vision care, backup childcare and elder care, and women’s preventive health. Known as a pet-friendly place, Kimpton provides workers with pet insurance, and even gives people time off to grieve if their pet dies. The company has been a leader in providing benefits for same-sex couples and transgender employees, and has earned a 100% score on the Human Rights Campaign’s Corporate Equality Index for 11 consecutive years. Senior-managers are eligible for month-long sabbaticals after seven years—but only if they promise to unplug from their work emails and phone calls.

Florida’s second largest employer is popular with “boomerangs”: Over 1,300 former employees have returned to the ranks by taking advantage of a policy that allows those returning within five years to retain their seniority status, preserving their benefits such as retirement vesting and time off accrual. This provision can be important as the hospital allows employees with at least 20 years of service to accrue a maximum balance of 1,500 hours in their PTO bank, cashing it all out upon retirement at their current rate of pay.

New employees at the world’s largest credit union—with over 6 million members consisting of military service men and women, and their families—attend an orientation that includes a military experience module to create awareness and empathy for situations faced by their members. There’s also a big focus on employee wellness here; each year, the CEO challenges all employees to select a personal wellness goal, such as quitting smoking, losing weight or getting in shape. Those who stick to it for six months receive a prize.

Global hotel chain has spent an average of $50,000 updating employee cafeterias to make them feel more like restaurants. Every hotel now has a lounge where colleagues have access to computers, TVs and video games. From the CEO on down, everyone at Hyatt is on a first-name basis, and hotels regularly host “Night Owl Breakfasts” when managers serve meals to night-shift workers, share information and gather feedback. During the past 12 months, Hyatt chose to promote an internal candidate more than 47% of the time.

Employees rave about this Big Four accounting firm’s flexible scheduling program: one mother of three was recently made partner while working part-time. To help new moms and dads cope with their transition, PwC has just started offering them 30 days of paid parental leave. For interns who have secured full-time offers from PwC, they are welcomed to the company at a launch event at Disney World theme parks, where they compete in fun challenges like a puzzle game called Pirate Pursuit. Meanwhile, PwC also challenges staff members in unique ways. They’ve encouraged employees to think deeply about diversity, with training on topics like hidden biases and its thought-provoking “PwC Talks” series, which encourages employees to “get comfortable with being uncomfortable.”

Women represent 51 percent of this hotel chain’s U.S. employee population — and 52 percent of non-executive managers. The company has a Women’s Mentoring Program and a Women’s Team Member Resource Group, which hosts special events for women’s leadership. Starting in 2016, the company is surging ahead of the industry by ramping up paid leave to two weeks for dads and adoptive parents — and giving moms ten weeks off following childbirth.

Arthrex pioneered the field of arthroscopy (minimally invasive surgery on joints) and has developed more than 9,500 surgical devices and procedures since its founding in 1984. Everyone here enjoys a daily free catered lunch and on-site medical care as well as a year-end profit sharing bonus. Employees and their families are all invited to family events throughout the year including beach parties, fall festivals, summer bowling nights, and Arthrex-only events at local attractions.

Ninety years following the birth of its founder, Ingvar Kamprad, this Swedish home furnishings retailer has more than 14,000 U.S. employees (and 128,000 around the world). As part of his legacy, everyone gets the “Little IKEA dictionary,” not to explain product names like Smörboll and Figgjo, but to remind them of values like humbleness, willpower, simplicity, and togetherness and enthusiasm. The egalitarian culture provides all part-time workers who work more than 20 hours per week get full benefits, including gender reassignment, infertility treatments, and long-term disability. If an hourly co-worker has a disagreement with a corrective action or termination, the issue can be reviewed by a panel of peers. Also read: At Ikea, Equality Is Key.

Tradition of caring is strong at this automotive enterprise that company distributes Toyotas to 176 dealerships in the Southeast. (These dealers sell nearly 20% of all Toyotas sold in the US.) Founder Jim Moran began the tradition of free haircuts for associates during his early days as a car dealer in Chicago. Haircuts and manicures today are provided in 1,500 square foot salon at the Florida headquarters. That is only one of many perks offered here: onsite childcare, 11 fitness centers with a lap pool and 9 health centers with physicians, nurses and physical therapists.

There is a strong family feeling at this employee-owned supermarket chain, which operates more than 1,100 stores in five Southeastern states. Turnover here is incredibly low, averaging 5% for full timers and 38% for part timers. Nearly 20,000 employees have worked at Publix for more than 15 years, and one reason they stay is a stock ownership plan that automatically plunks shares into employee accounts at the end of each year. The contribution ranges from 7% to 10% of their pay. Cost to employees is zero. And for the last 55 years, Publix stock has grown on average by almost 16% annually. All these factors have made Publix the largest employee-owned company in the nation. Also read Bag Boy Confidential: My Five Days as a Publix Employee.

This big auto, home and life insurer joined several other big firms last year by raising the hourly pay to $15/hour from $10.50 —benefitting approximately 900 workers—at a total investment of $2.1 million. With nearly 34,000 employees at 248 sites, the Columbus, Ohio-based firm provides expectant mothers with seven fully-paid days off prior to their due date, with up to 8 weeks, and this year added 7 additional “baby bonding” days to the end of their maternity leave. The company also increased paid-time-off for new dads and domestic partners, from two to seven days. Adoption assistance has also been upped from $3,000 to $6,000.

Marriott has been adept at bringing new brands into its tent, and none bigger than the pending deal with Starwood Hotels, custodian of the Westin, Sheraton, St. Regis and W chains of hotels. The acquisition of Starwood later this year will make Marriott the world’s largest hotel company, with a global workforce of more than 300,000 working in more than 5500 hotels. New talent will see a company that has a strong promote-from-within tradition, and a diverse team with one of the largest groups of minority employees in U.S. business. No wonder that nearly a third of U.S. employees have been with the company for more than 10 years, and 12 % have been here for more than 20. Those that exceed 25 years are eligible for free weekend stays at participating Marriott hotels for the rest of their lives.

This leading healthcare organization cares for its caregivers: A Burnout Strategy Taskforce prevents and tackles exhaustion in departments where burnout is frequent, and 475 employee “wellness champions” are scattered throughout larger locations. Wellness programs include exercise facilities and discounted memberships to area health clubs, group classes, individual sessions with fitness coaches, lunch-and-learns, and meals-to-go. If an employee is critically ill or injured over 150 miles from a Mayo location, they can expect free air ambulance transport to the nearest Mayo facility for care.

The financial services giant, a 16-year veteran of the 100 Best Companies list, is going through a rough spell and expects to have layoffs this year as a result of cutting $1 billion in costs by 2018. AmEx says less than 20% of staff will be affected. The company returns to the list this year with enthusiastic comments from employees, who tout its strong programs supporting working parents. AmEx offers 40 days paid maternity leave, 30 days for new fathers and adoptive parents. Surrogacy benefits were doubled in the past year to $10,000, on par with adoption benefits. A Fatherhood Breakfast series has been held for the past five years, giving employees an opportunity to hear from leaders in the company on how they balance work with raising a family.

To see the full list of this year’s best employers in the U.S., visit fortune.com/best-companies, where you can also find job searching tips, career advice, and secrets from recruiters on how to get hired.