This Is What Makes Hilton a Great Place to Work 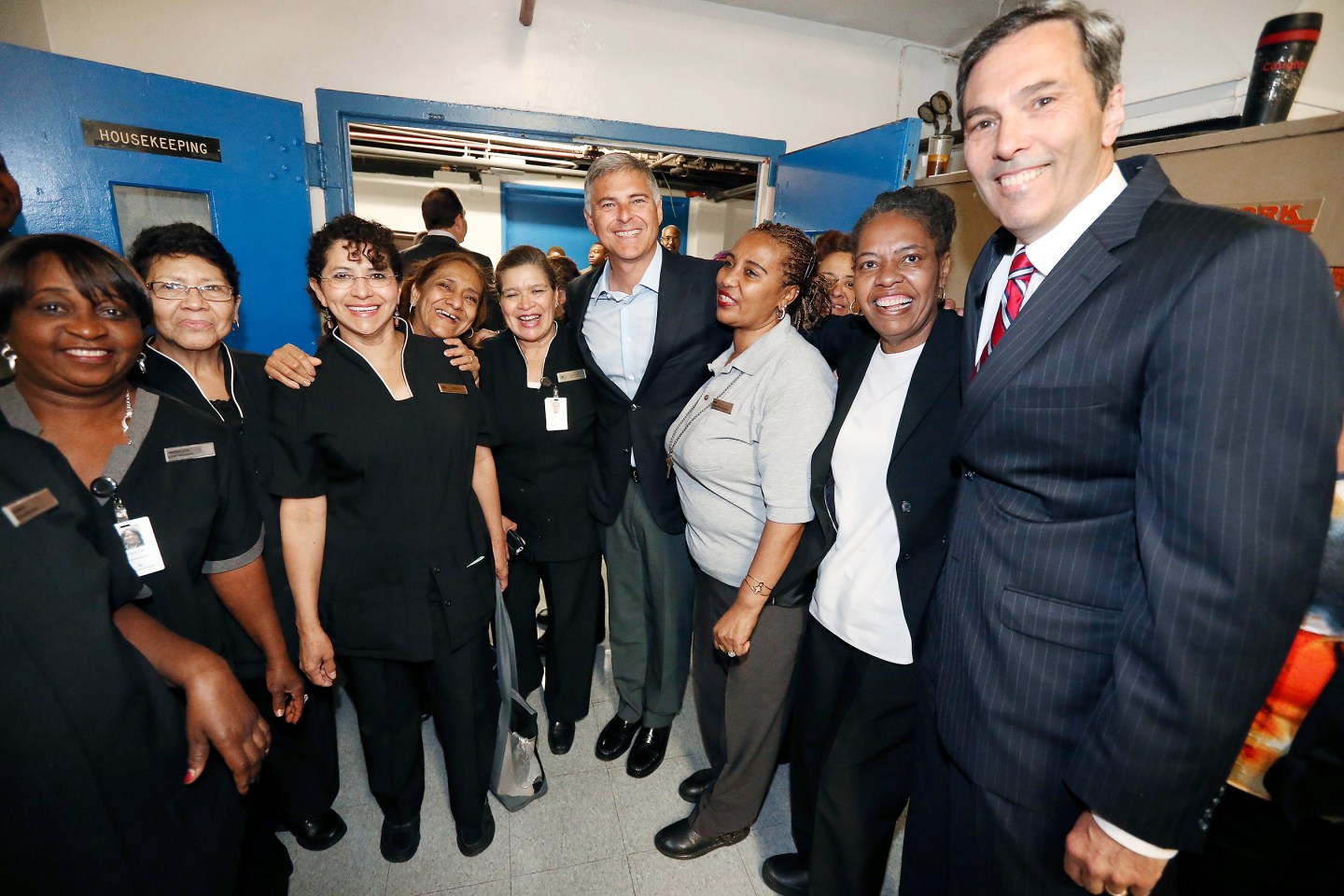 Four years ago, Rebecca Hamby was living with her parents in Chattanooga, Tenn. and earning a modest hourly wage working as a guest service agent at the city’s Hampton Inn by Hilton (HLT). Though her responsibilities weren’t expansive—she had to check guests in and out and answer the phones— Hamby took the gig with ambitions of a more prolific role.

“The job description said that there was plenty of opportunity for growth, and I always went beyond my duties to do as much as possible, but I never imagined that I would get to where I am today,” recalls Hamby, who, four promotions later, is now a manager of brand performance for three hotels part of Hilton Worldwide: Hilton Resorts, DoubleTree by Hilton and the Curio Collection.

The position is based at Hilton Worldwide headquarters in McLean, Va. and earns Hamby a salary comfortable enough to take vacations to destinations such as Paris, long on her bucket list, and also build up savings. “I don’t know what my future career at Hilton is, but I know that it has no boundaries,” she says.

Hamby’s trajectory is far for from unique. Promoting its own employees, referred to as “team members,” is at the core of Hilton’s philosophy and has been ever since Conrad Hilton founded the hospitality company in 1919.

After private equity firm Blackstone Group acquired Hilton in 2007, it hired Christopher J. Nassetta to become Hilton’s new president and CEO. The hospitality company wasn’t seeing its full potential, Nasetta told Fortune, so he pushed internal recruitment even more when he was brought on to lead the new Hilton Worldwide. “There was an amazing collection of assets, but we needed a way to inspire people,” he said, acknowledging a lack of recognition programs. He created a Team Member Appreciation Week in which he visits hotels to reward and thank employees for their work. He also began hosting quarterly town halls, where he delivers updates on the business and calls out high-performing team members. “I’m a constant communicator,” Nassetta says.

So far, the focus on promoting-from-within has worked, helping the company grow to 58,000 team members at more than 4,600 hotels across a portfolio of 13 brands. Two years ago, Hilton went public with a $2.3 billion IPO that broke industry records. The cultural overhaul is complete. Employees surveyed by Great Place to Work say the change is profound. Their comments were strong enough to propel the company onto Fortune‘s annual ranking of the 100 Best Companies to Work For at No. 56 this year — joining list stalwarts Four Seasons, Hyatt, Marriott, and Kimpton.

“Recruiting from within is a strong bias of ours,” says Matt Schuyler, Hilton’s Chief Human Resources Officer. “We think that if we give our team members a first shot at available jobs, they’ll stay with us longer because they have more professional satisfaction.”

In fact, candidates interviewing for their first job at the company, even those at the hourly level such as Hamby, are asked about their long-term career goals, and those looking to advance within its ranks are considered more favorable hires.

Existing team members, meanwhile, get an advantage on open positions because the human resources department posts them solely on the company’s internal career site for several weeks before recruiting externally.

But advancement at Hilton isn’t just about salary jumps and promotions. Fulfilling personal goals along the way can also be an unexpected perk.

For Charles Gremillion, that goal was living abroad. “I’ve always wanted to live out of the U.S. but wanted to do it in connection with a career, not as backpacker,” he says.

After spending 10 years working with Embassy Suites—first as the director of sales and marketing for the New Orleans property and then as regional director of brand performance for the southeast U.S.—Gremillion applied for a job to build the DoubleTree by Hilton brand in Asia Pacific. The role required moving to Singapore, Hilton’s headquarters for the region, and Gremillion was ecstatic when he was hired.

While based there, he traveled extensively to Australia, India, China and other countries which fell under DoubleTree’s Asia Pacific purview. Between his business trips, he was able to fit in plenty of personal ones and found himself enamored with China. “I loved the food and the cultural clash of old and new,” he said. As luck would have it, Hilton had an opening in Shanghai to oversee the development of Embassy Suites in the country. Again, Gremillion successfully applied for the gig and continued to bring his dream of international living to fruition.

He’s now based back in McLean working as a senior director for business performance support for the same trio of brands as Hamby but says his Asia stint brought him an “immeasurable” sense of personal accomplishment.

Giving team members the chance for multi-faceted success is exactly what Nassetta wants. “We want to show people that they have a path here,” he says.

He started communicating his vision in a more formal way last year with the debut of the company’s “Heart of Hilton” campaign, meant to convey that team members are the most valued part of Hilton. At the core of the campaign is the Team Member Appreciation week in May where the sales and marketing teams at each property are given a budget to organize events to celebrate employees and inspire their professional growth.

Nassetta has firsthand experience with the philosophy he preaches. His first job in hospitality, when he was 18, was in the engineering department at the Holiday Inn on Capitol Hill in Washington D.C. . “I got paid by the hour and spent my summer plunging so many toilets that my colleagues gave me a plunger spray painted in gold on my last day,” he says. “My own path shows you that accomplishment has no limits, and nowhere is that more true than at Hilton.”

See the full list of Fortune‘s 100 Best Companies to Work For at fortune.com/bestcompanies, where you can also find job searching tips, career advice, and secrets from recruiters.