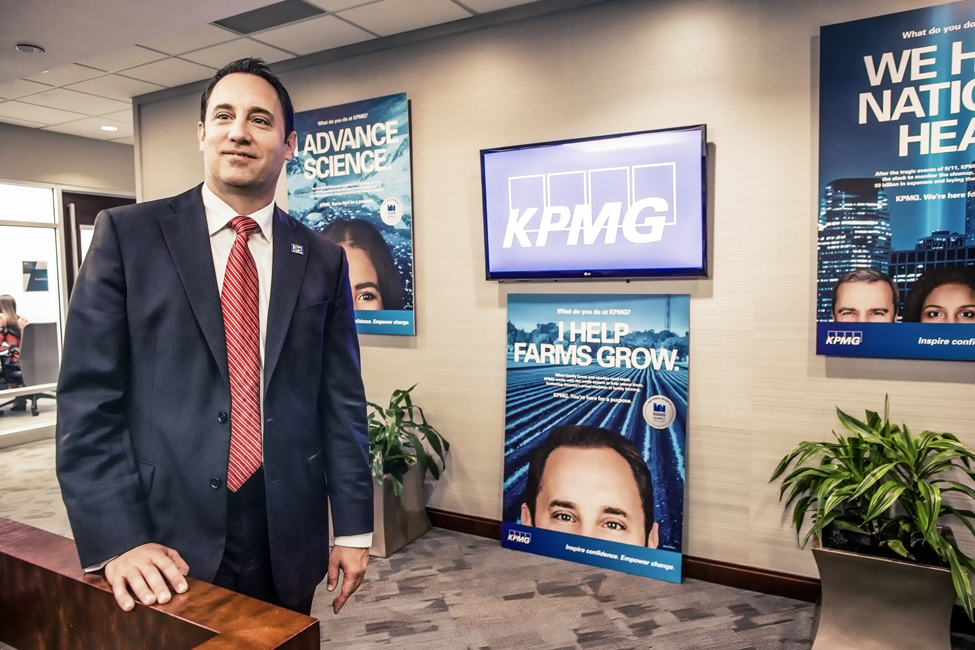 Photograph by Chris McEniry for Fortune

Perk: A shared leave program allows employees to donate unused paid time-off to co-workers who might need it in an emergency. Last year workers gave 10,000 hours.

As the stereotype goes, accountants are a species of professional often seen as spiritless human calculators—and not as indispensable visionaries. “‘Taxes must be boring.’ I get that all the time,” says Kirt Bocox, senior tax manager at KPMG, one of the firm’s many employees who dispute—indeed refute—that pre-conception. “People get the stereotype of accountants completely wrong. It’s actually exciting and fun.”

Bocox is not the only impassioned one. To hear Bruce Pfau, vice chairman of human resources and communications, tell it, the company, based in Amstelveen, the Netherlands, gushes with enthusiasm. So he devised a plan to harness that energy: Instead of dictating what employees should consider their motivating force, the company asked each to think up his or her own and frame it on a poster. HR provided a template on the organization’s internal website, KPMG Today.

“I’ve always believed that culture is the most important dimension of any CEO’s responsibility to an organization,” says John Veihmeyer, global chairman and CEO of KPMG in the U.S., who kicked off the program in June with a video in which he stood on the Top of the Rock in New York City to announce a goal: the “10,000 stories challenge.” If the company received that many posters by Thanksgiving, everyone would earn two extra days of paid vacation.

Posters rolled in by the thousands in the first week—“I advance science,” “I promote peace,” “We protect our nation.” And they rolled in by the thousands during the second too. Even Phil Mickelson, the KPMG-sponsored pro golfer, joined in with one of his own: “I win titles.” By July the company had blown well past the 10,000 mark—and submissions kept coming. By the time it ended in November, the company had received more than four times the requested number of posters.

“The initiative enormously exceeded our expectations, and morale scores soared to historic highs,” says Pfau. In fact, in a recent engagement survey, the percentage of its U.S. employees who endorsed KPMG as a great place to work jumped to 85%. (The firm also had one of its most profitable years to date in its 118-year history.) “The higher-purpose focus of our firm, combined with its financial performance, makes me the proudest I’ve been in my time here,” Pfau says.

Bocox, whose job includes helping farmers get loans, created an “I help farms grow” poster, which was featured on the company intranet. He says the program achieved a viral level within the company comparable to that of the ALS ice-bucket challenge that swept social media last summer. “It didn’t cost a lot to do, but once it got going, it just took off,” he says.

Bocox spent the extra time off with his brand-new baby daughter. She was born on the last day of December. “Pretty good tax planning,” he often jokes while meeting clients. “If I’m willing to properly tax plan my child’s birth, just think about what I can do for you.”