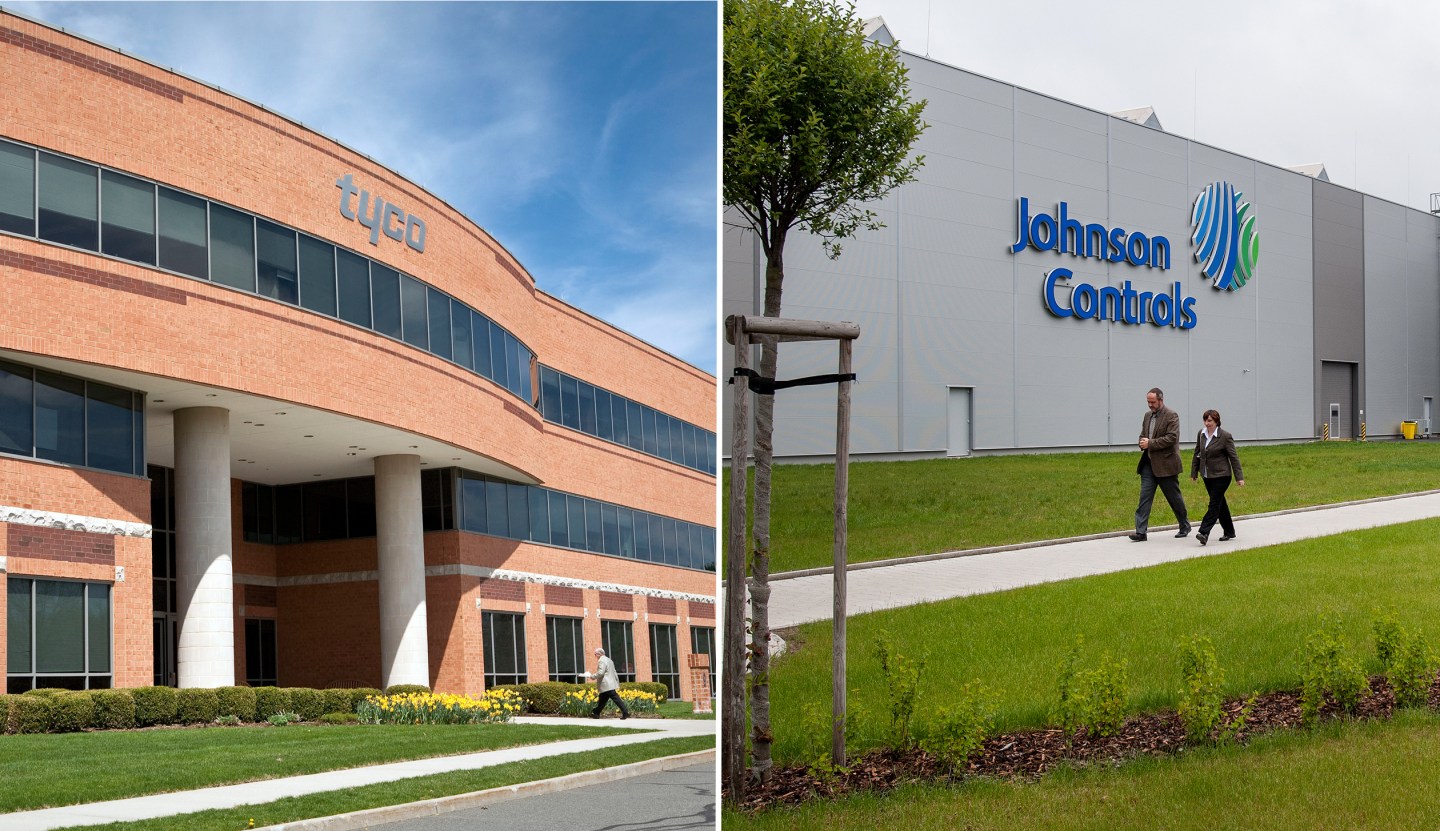 Usually when to industrial giants merge it’s because they are trying to hunker down in the face of new technology. But as Tyco and Johnson Controls plan their roughly $18 billion merger, the deal is about building a business for the connected future.

The two firms are building business that owns every aspect of the so-called smart building. Smart buildings are those where everything from the air conditioning to the light bulbs are connected to the internet, and the data is crunched for energy efficiency and productivity gains.

The companies will have a combined $32 billion in annual revenue. That $32 billion revenue figure excludes the expected spin out next year of an automotive business called Adient after the merger is complete.

The resulting new company, called Johnson Controls, will combine Tyco’s fire and security business with JCI’s air conditioning, energy, and sensor business. But as the companies lumber into place to complete the deal, the largest question is will it be enough?

In the industrial Internet landscape, the new Johnson Controls will face off against its traditional rivals Honeywell, GE, and Emerson, all of which have been maneuvering quickly to connect their own aging industrial gear to the Internet. The idea is that connected sensors on doors, on heating and air conditioning systems, and in jet engines will deliver data that businesses can analyze. That data will let companies track quality, predict equipment failures, and shift their businesses from selling a product to selling a service. This might mean selling cool air as opposed an air conditioner.

But the new JCI will also compete against the new wave of IT companies that want to get into the smart building sector, and that are moving there with Internet-enabled sensors and software. This clash of the old-school operational technology like connecting light bulbs and the digital information technology is playing out today as chief information officers and facilities managers play hot potato with the task of automating their buildings, but it will get much worse.

Neither side is ready to take on the role of being in charge of such a complicated network of sensors and software, but someone will have to.

Most buildings are a mix of old-school tech and standards that are slowly being brought online through hubs that act as translators to the Internet. Firms like Cisco, GE, and Intel are trying to help bridge that gap.

I’ve written how surprised I am that Honeywell has offered some surprising technology that brings the Internet tech to the old-school world of building management. JCI has smart offerings as well, such as Metasys, its smart building management system and controllers, and its smart heating and air conditioning systems.

Tyco has also been working hard to move forward with connected technology, and since 2014 has had a product called Tyco On that lets third parties integrate with Tyco’s security and fire systems. Tyco’s entire approach, including its security systems for retail stores, has been an open one. That has helped it gain ground with partners and with startups, and helps it build new services that incorporate innovations from its partners products, and applications.

This ability to open up and pull innovations from third parties is an area where Johnson Controls should take a page from Tyco.

And even as most of Wall Street considers the deal’s unique financial structure and tax implications, there are structural questions that any large industrial conglomerate should ask unrelated to the balance sheet. Is it enough for Johnson Controls to focus only on getting all of the pieces of building automation or should it also own the information technology elements such as the database technology or cloud platform as well?

Its rival, GE, has spent millions becoming a software and cloud computing expert so that it can bridge the gap between operation tech and information tech. It’s no secret that the gap is closing.

So is pursing an open strategy and becoming a respected player the ecosystem enough? Is the real value of an operational technology company in the data that its sensors provide and the expertise it has in interpreting that data?

If the answer to that last question is yes, then the new Johnson Controls should invest in more analytics and expertise to make sure it can take the data it has and build the best algorithms for its customers. If the answer is no, then perhaps we’ll see it become a target of a larger IT firm, or for the already debt-laden Johnson Controls attempt its own cloud and IT acquisitions.