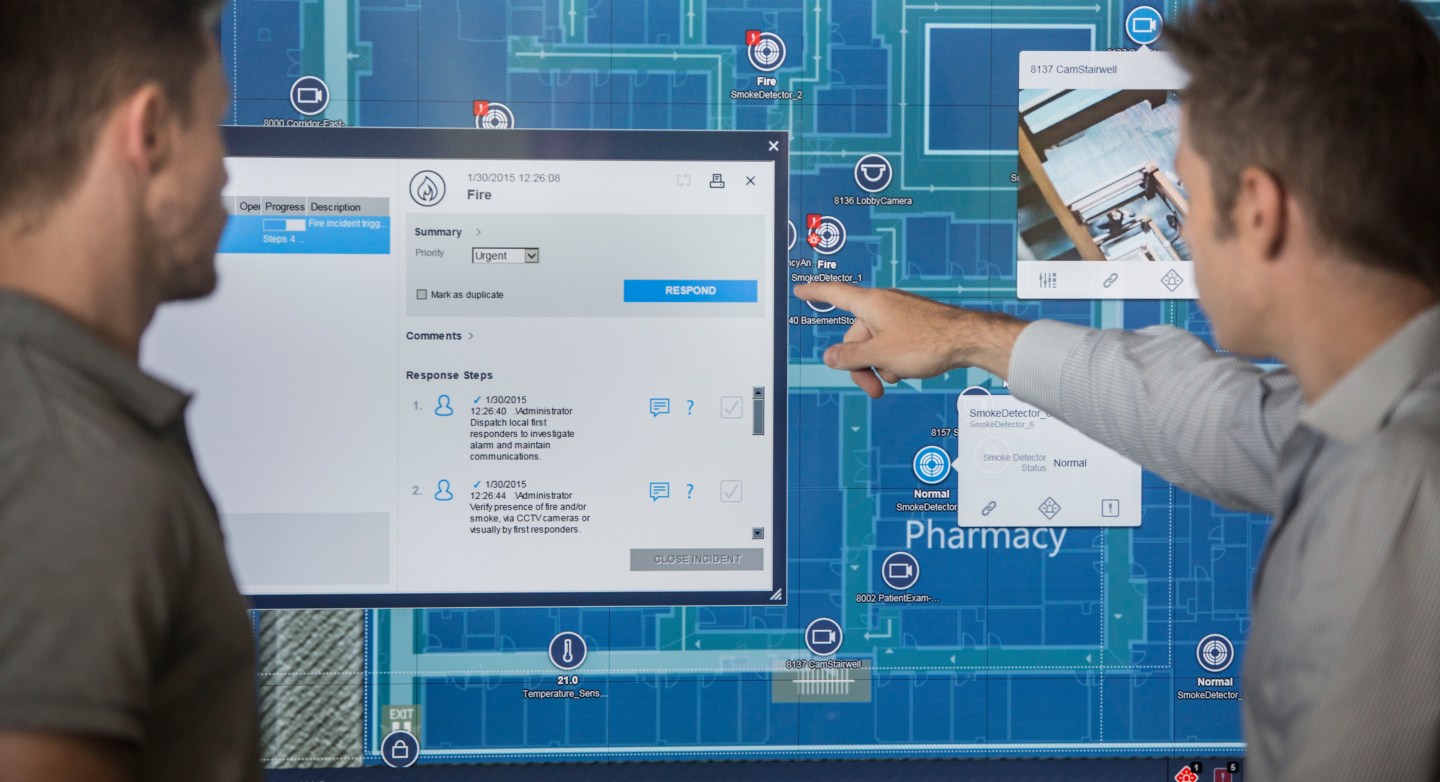 It’s not enough to have a smart building crammed with sensors and algorithms that are optimizing your air conditioning, monitoring your security and notifying you when something is about to become a problem. No, when you have a smart building, you must have an 80-inch control wall, by golly, and it should have a touch screen that lets you zoom in like some sort of actor in a science fiction movie. Yes, you are like Kate Winslet at the end of Divergent or characters in the Minority Report.

At least that’s the promise behind Honeywell’s two new products–the Command Wall, which is the touch screen itself, and the Command and Control Suite, which is the software that connects various physical systems in the building and their data to the Command Wall. The two products are designed to let the user, which could be anyone from a facilities manager to a CEO, respond quickly to a range of incidents, ranging from a purse snatching in a mall to a fire at a warehouse.

The idea is to display an array of information in one place and let a user quickly grab and pull up aggregated information from a variety of sensors including video feeds, access control and fire alarms. Those are linked to internal files such as personnel data or inventory so the person controlling the Command Wall might be able to see quickly that the warehouse file is near shelves containing boxes of low-value merchandise and that two employees aren’t accounted for.

The system can display information from Honeywell’s sensors as well as products from other vendors, which makes it a useful dashboard into the life of a complex system that many connected buildings are becoming. John Rajchert, the president of Honeywell Building Solutions, says that in testing the software and Command Wall at various customers around the world, what has surprised him was how many users have customized the way that the data shows up on the screens. Because customers can pull in building data with Google Maps, law enforcement data, their own records or anything else, the possibilities are truly endless.

And that’s actually why this product is really compelling. It’s not the sweet interface that might actually be overkill when compared to a simple tablet or a smaller screen—it’s the idea that we’re reaching a place where information from IT networks, building control systems and outside sources can flow easily into one user interface that can be dictated by the end consumer of that data. IBM, Cisco and other big name IT companies are offering similar aggregated dashboards for their smart cities efforts but I’m not sure how much customization those products allow and any that are focused toward a single building.

Rajchert didn’t disclose the pricing on these systems, but said it was based on a variety of factors including how many things a company wanted to monitor. There is a larger up front cost and smaller, ongoing service fee associated with the software. Customers testing the software and the Command Wall run the gamut from “landmark skyscrapers” to hospitals and airports. Who knows, maybe the next CEO you visit might have one of these in his office.