The World Health Organization has renamed monkeypox. Here’s why 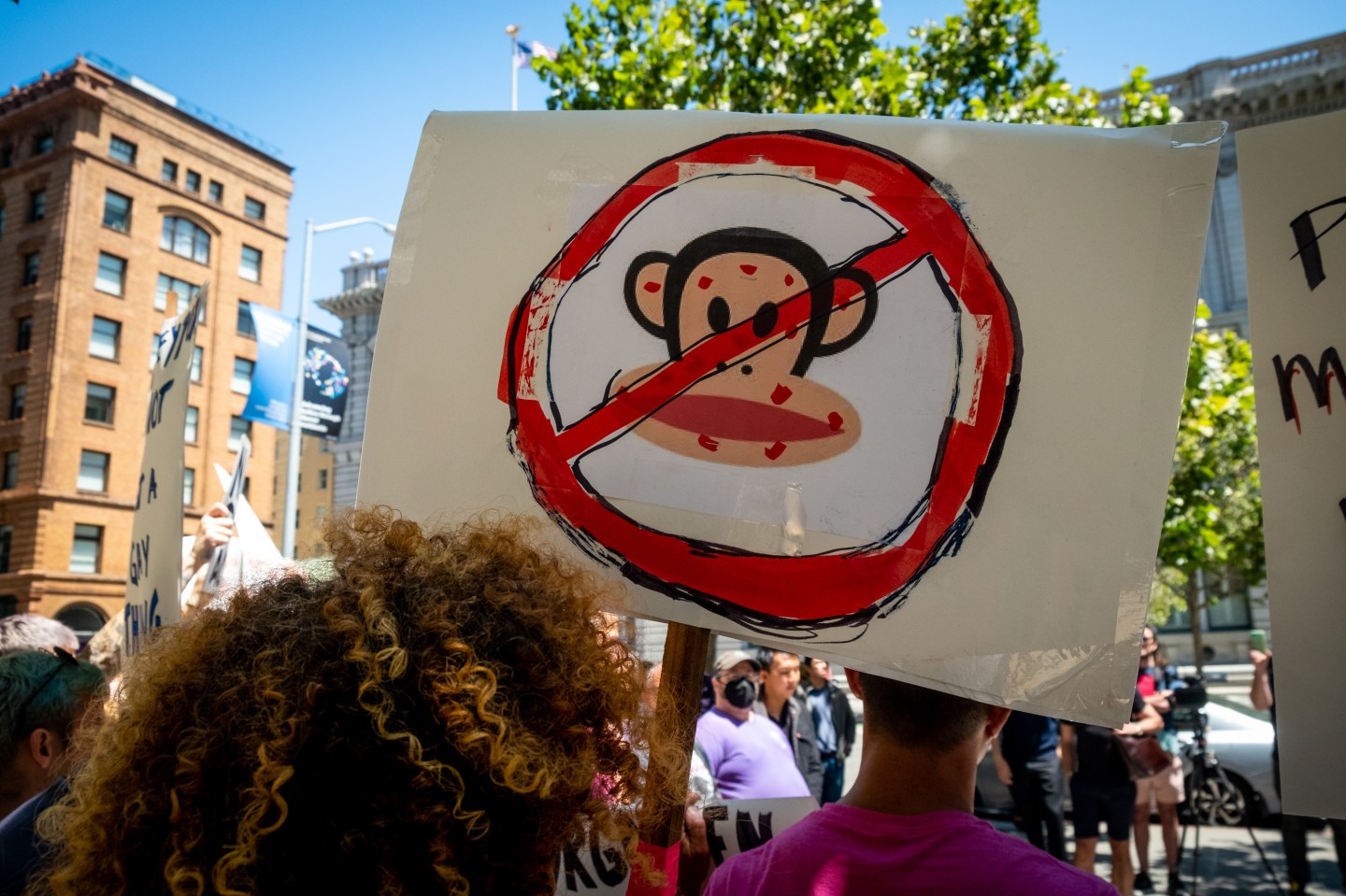 People in San Francisco hold signs during a rally to demand that the federal government respond quickly to the recent monkeypox outbreak.
Marlena Sloss for The Washington Post via Getty Images

Monkeypox will now be known as “mpox,” in a bid to destigmatize a disease that has spread to more than 100 countries this year and eradicate racism associated with it, the World Health Organization announced Monday.

Both terms will be used for the next year while “monkeypox” is phased out. It’s highly unusual to rename an existing disease—especially during an international outbreak. But such a move was warranted because of hateful discourse surrounding the condition, both online and in some communities, according to the WHO.

“Mpox” will be added to the ICD-10 in the coming days and will be included in the ICD-11 when it’s released in 2023, the organization said in a news release. Also known as the International Classification of Diseases, the ICD is used to classify and code causes of deaths on death certificates.

Dr. Georges Benjamin, executive director of the American Public Health Association, never found the term stigmatizing, he told Fortune. But he appreciates what the WHO is trying to accomplish and “hopes it’s successful from their perspective.”

“Whether it will work or not remains to be seen,” he said. “It’s always tough to change the name of an entity once people have gotten it into their vocabulary.”

Dr. Amesh Adalja, an infectious-disease specialist and senior scholar at the Johns Hopkins Center for Health Security, has always considered “monkeypox” a misnomer, since monkeys are not a natural host for the virus. The fact that it was first identified in monkeys used for research in Denmark in 1958 was a coincidence.

Ideally, virus names “actually have some reflection of their biology,” Adalja said. “I thought [monkeypox] was an inaccurate name and might have confused people as to what the actual host is.”

Relatively little is known about the natural history of monkeypox, aside from its 1958 discovery and the first documented case in a human, which occurred in 1970 in Central Africa. Monkeys aren’t natural hosts for the pathogen, which is often transmitted by rope and tree squirrels, Gambian pouched rats, dormice, and some primates, according to the WHO.

In August, the WHO renamed clades, or subsets, of the virus, in an attempt to reduce stigma surrounding them. The Congo Basin subset—the more deadly of two known subsets of the virus, and also known as the Central African clade—was renamed Clade I. The West African clade, which is fueling the current global outbreak, was renamed Clade II and was broken into two additional categories: IIa and IIb.

The WHO discussed the potential renaming of the disease at a late July news conference, mere days after the condition was declared an international public health emergency. Its International Committee on the Taxonomy of Viruses was in conversations on the topic, in addition to whether other poxviruses—like cowpox, which is now usually carried by rodents—might be renamed, officials said.

“For the vast majority of people who deal with these diseases, experience them in communities, the name, per se, is not a major issue,” Dr. Michael Ryan, the organization’s executive director of health emergencies, said at the time. “It’s the weaponization of these names. It’s the use of these names in the pejorative. It’s targeted manipulation.”

Marburg virus—a hemorrhagic fever similar to Ebola, found in Africa—was named after a German city where one of the first outbreaks occurred, among laboratory monkeys imported from Uganda, Ryan pointed out.

“I don’t think the people of Marburg today are worried about the stigma of that,” he said. “But there are certain words and certain trigger words that are used and manipulated in other circumstances, and they are basically, frankly, racist connotations. We have to call that out because names are names.”

Regardless of a virus’s name, “if people are determined to misuse and to weaponize” a term, they will, Ryan said.

Still, it’s the responsibility of the international scientific community to reduce opportunities for abuse, he added.

Monkeypox, endemic to Africa, spread globally this year, with more than 81,000 laboratory-confirmed cases, more than 1,500 probable cases, and 55 deaths reported to the WHO since January, according to the international public health organization.

Since May, the vast majority of cases have been reported outside Africa, marking the first time sustained transmission has occurred without direct links to West or Central Africa.

Classic symptoms of monkeypox include pus-filled blisters that can occur over the entire body. But symptoms of monkeypox most commonly seen in the current outbreak tend to be mild and limited. Sometimes just one lesion is found—often in the groin area, out of plain sight. Complicating matters, recent lesions tend to look like chickenpox or a sexually transmitted disease like herpes or syphilis—or even a pimple or a blister. It’s also possible to have an STD and monkeypox at the same time, making detection more difficult.

While the global outbreak was identified this year, widespread circulation of monkeypox outside Africa may have been occurring for a while, according to the WHO. Pandemic lockdowns, during which many people refrained from accessing health care, may have contributed to delayed recognition of the outbreak. So might have the presentation of recent cases, many of which feature just one lesion in the groin area and appear very similar to other sexually transmitted diseases.

Monkeypox poses a moderate risk globally and a high risk in the Americas due to the fact that most global cases are being reported in the region, according to a Monday report from the WHO. The risk is moderate in Africa, the Eastern Mediterranean, Europe, and Southeast Asia, and low in the Western Pacific.

Global cases are down nearly 50% week over week, according to the report. The vast majority of cases—more than 92%—reported last week were from the Americas, a trend that’s held since European cases began dropping this fall.

Still, U.S. cases are on the decline. They’ve been falling steadily since August, when federal health officials declared a public health emergency and increased access to a smallpox vaccine approved for monkeypox.

As of the first week in November—the latest week for which the U.S. Centers for Disease Control and Prevention provides demographic data—40% of confirmed cases occurred in white individuals, 36% in Black individuals, and 18% in Hispanic individuals. Earlier this fall, cases had been increasing among men of color, even as they decreased nationally, federal health officials acknowledged.