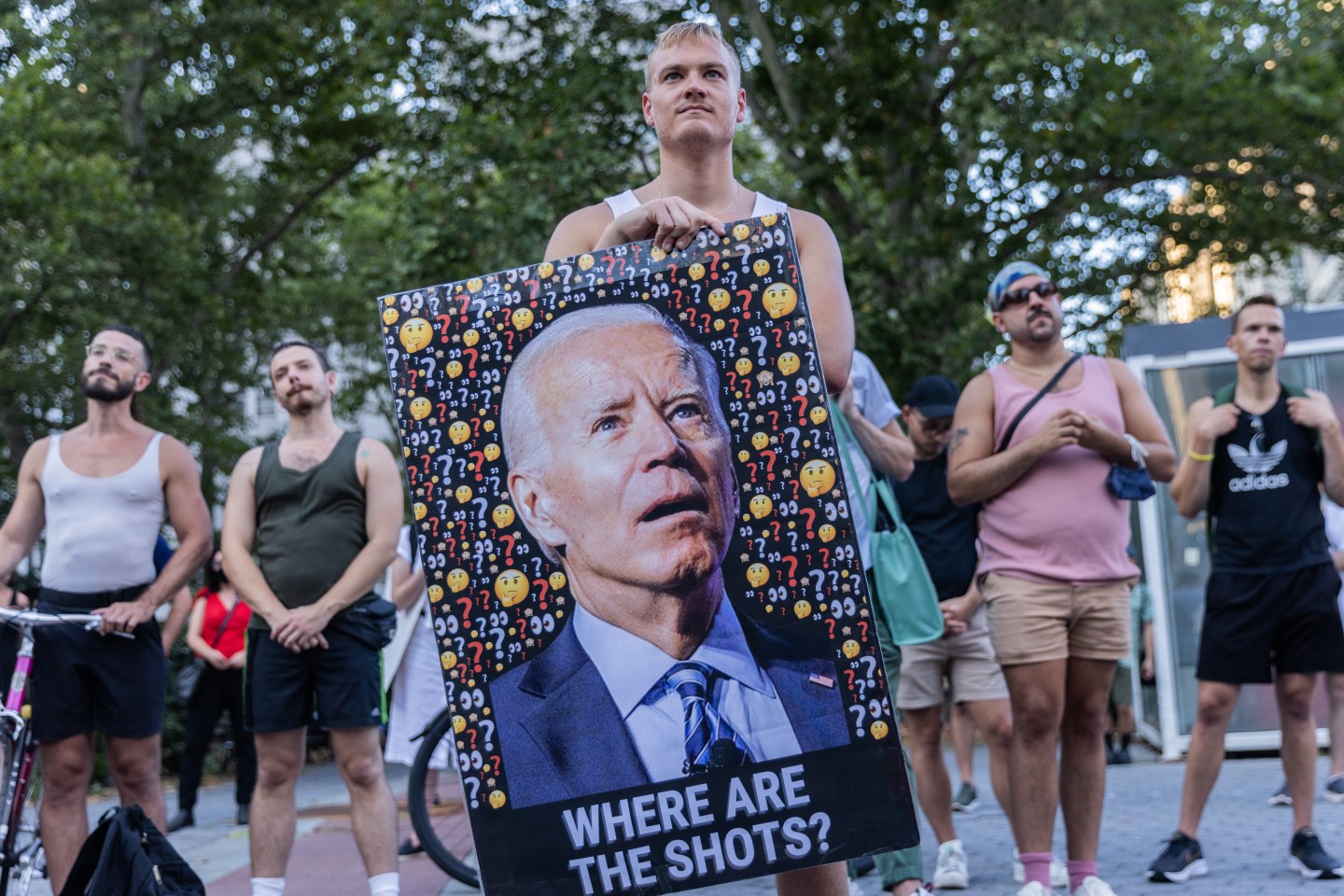 People protest during a rally calling for more government action to combat the spread of monkeypox on July 21 in New York City.
Jeenah Moon—Getty Images

“We’re prepared to take our response to the next level in addressing the virus,” Becerra said on an afternoon press call regarding the smallpox-related pathogen. “We urge every American to take monkeypox seriously and to help us tackle this virus.”

Dr. Georges Benjamin, executive director of the American Public Health Association, on Thursday called the move a “step forward,” saying it will raise awareness of the disease and expedite the process of approving vaccines and therapies.

Dr. Mary Montgomery, a clinician educator in the Division of Infectious Disease at Brigham and Women’s Hospital—a Harvard-affiliated facility in Boston—said deploying resources early on in an outbreak is a best practice, as we’ve learned in previous pandemics.

The public health emergency declaration “means way better access to testing, an increase in the distribution of vaccines,” and an expansion of “the personnel available to administer those vaccines in a timely manner,” she said.

The federal government distributed more than 600,000 doses of Jynneos vaccine—the safer of two smallpox vaccines approved to treat monkeypox—last week and has made more than 1.1 million doses available so far, health officials said. The U.S. has so far secured nearly 7 million doses, though most have not yet been delivered.

Federal health officials on Friday opened up nearly 800,000 doses of the vaccine for ordering by state and local public health officials and began filling those orders this week, usually within 30 hours. They plan to open up another round of ordering on Aug. 15, though jurisdictions that use 90% or more of their supply will be able to place an order sooner, officials said Thursday.

But supply isn’t keeping up with demand. Food and Drug Administration Commissioner Dr. Robert Califf on Thursday said that the agency is considering a process called “dose sparing” to expand its supply. It would allow health care providers to split a one-dose vial of Jynneos into five doses, to be administered to five patients. The vaccine would be administered intradermally, or between layers of skin, instead of subcutaneously, or under the skin.

Officials did not say whether patients would return as usual in 28 days for a second dose, under such a plan.

The approach provides improved immune response to the vaccine and does not jeopardize safety or effectiveness, Califf said.

Health officials said Thursday they would likely make a decision on dose sparing “within the next few days” and that it was “looking good,” though an emergency use authorization would be needed due to changes in dosing and administration.

Emergency use authorizations currently exist for COVID vaccines and treatments, in addition to products for anthrax, Ebola, H7N9 influenza, Middle East Respiratory Syndrome Coronavirus (MERS), nerve agent, and Zika, among other conditions, according to the agency.

Around 6,617 cases of the smallpox-related virus had been recorded in the U.S. as of Wednesday, according to the U.S. Centers for Disease Control and Prevention—a nearly 350% increase compared to three weeks ago. Every state except Montana and Wyoming have reported at least one case.

Globally there had been just over 26,000 cases reported as of Wednesday, according to the CDC, with the vast majority in countries that have not historically seen monkeypox cases.

“We have an outbreak that has spread around the world rapidly, through new modes of transmission, about which we understand too little; and which meets the criteria in the international health regulations,” Adhanom Ghebreyesus said at a press conference announcing the decision.

The White House in late June announced the first phase of its national monkeypox vaccine strategy, saying it would release tens of thousands of doses vaccine “immediately” from the Strategic National Stockpile—with millions more on their way the coming weeks and months.

Prior to June 28, vaccines were available only to those with known exposure who had been notified by contact tracers. As of that day, vaccines were made available to those who were not contacted by contact tracers, but who had physical contact with someone who had monkeypox; men who have sex with men who had multiple sex partners in a venue where monkeypox is known to have spread; and at-risk individuals in areas where the disease is spreading at substantial rates.

The vast majority of jurisdictional requests are for the Jynneos vaccine. The ACAM2000 vaccine—which the National Strategic Stockpile houses in spades—can also be requested. But it uses a live virus and can have serious side effects, including stillbirth and life-threatening infection. It’s considered unsafe for women who are pregnant or breastfeeding, people with weakened immune systems, and those with heart disease.