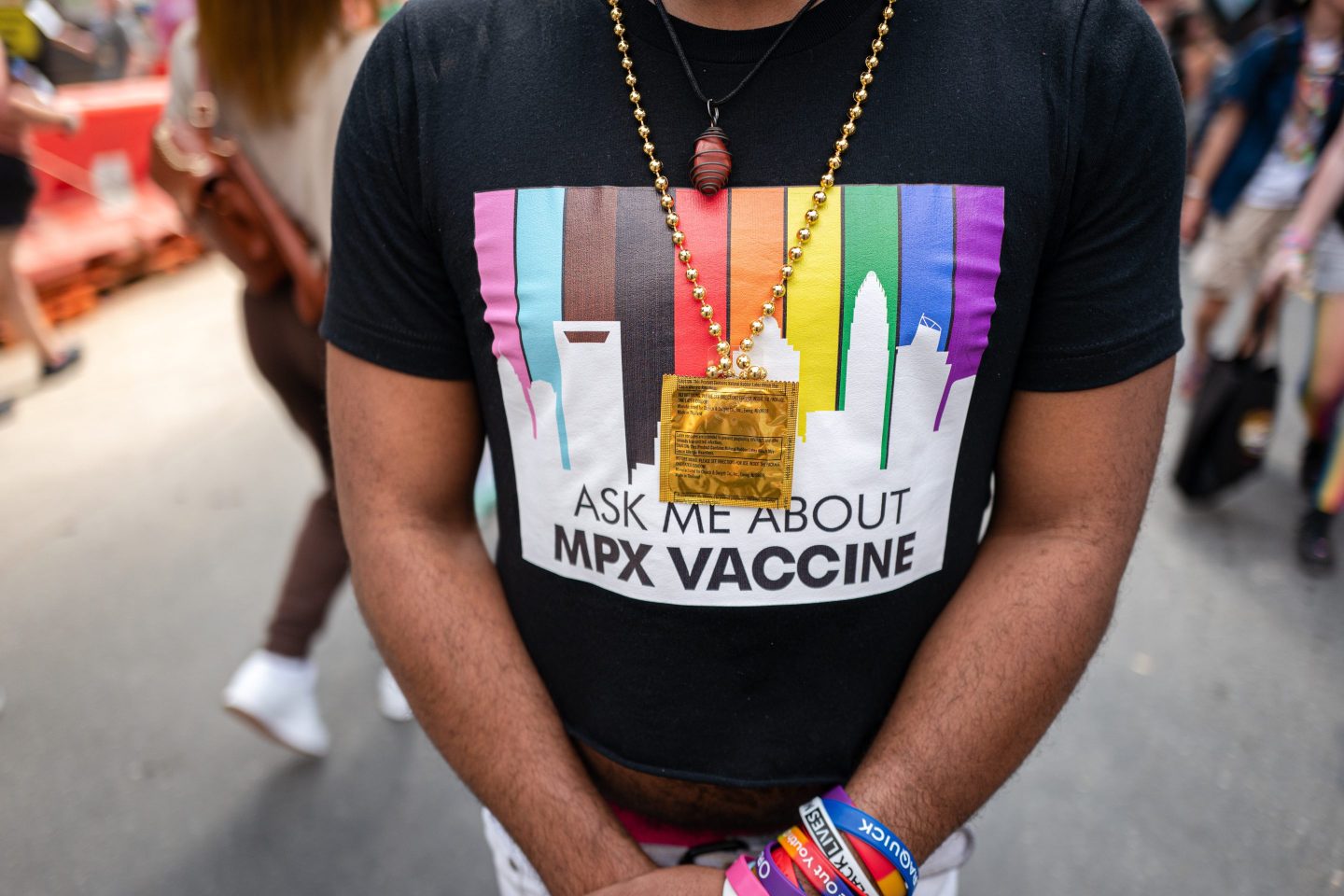 An employee of the Mecklenburg County Health Department wears a shirt encouraging people to ask him about the monkeypox vaccine at the 2022 Charlotte Pride Festival in North Carolina, Aug. 20, 2022.
Logan Cyrus—The Washington Post/Getty Images

New cases of the potentially deadly virus are down nearly 50% in the U.S. since early August, Bob Fenton, White House monkeypox response coordinator, said at a Thursday news conference.

While some areas of the U.S. are still seeing an increase in cases, the overall decline has U.S. health officials feeling “cautious optimism,” Dr. Rochelle Walensky, director of the U.S. Centers for Disease Control and Prevention, said.

Still, Black men who have sex with men continue to see a higher proportion of cases than white men—and receive one of the smallest shares of vaccines, federal health officials acknowledged.

Federal health officials on Thursday detailed efforts to reach minority populations with education and jabs. They called on Congress to provide funding for the public health emergency, declared in August. They’re currently using funds intended for HIV and other sexually transmitted infections to pay for monkeypox efforts, they said, adding that the virus is often transmitted among individuals who have HIV and other STIs.

Since May, nearly 23,000 cases of monkeypox have been diagnosed in the U.S., according to CDC data. Nearly 60,000 cases have been identified globally, the vast majority in countries in which monkeypox is not endemic.

Until this year, monkeypox was usually diagnosed in rural African areas where people have close contact with infected rats and squirrels. Since May, tens of thousands of cases have been diagnosed, on every continent—the vast majority in locations that historically don’t see cases.

When transmitted from human to human, the virus is usually spread via close contact, which may include sex and could include contact with personal items like sheets and clothing. It traditionally entails flu-like symptoms before the onset of a characteristic rash. In the current outbreak, however, sometimes only one lesion is seen, often in the genital region, and flu-like symptoms don’t always occur.

More than 60% of U.S. individuals diagnosed with monkeypox during the current outbreak have had HIV and/or at least one other sexually transmitted disease, they said.

And they detailed a CDC-sponsored study of Jynneos in the Democratic Republic of the Congo, or DRC, that may shed light on whether as little as a tenth of a dose of the vaccine would offer equal protection against the virus as a fifth of a dose.

In August the U.S. Food and Drug Administration approved an emergency use authorization that allowed doses of Jynneos, usually administered subcutaneously—under the skin through a shot—to be divided into fifths and instead administered intradermally—between layers of skin. The “dose sparing” regimen was intended to stretch the government’s limited vaccine supply.

While the U.S. has enough vaccines for at-risk populations, other countries like the DRC do not, said Dr. Anthony Fauci, head of the National Institute of Allergy and Infectious Diseases and physician to the president. The strain of the virus circulating globally, Clade IIb, has a relatively low fatality rate. But another strain, Clade I, with a fatality rate of around 10%, circulates in the DRC and elsewhere in Africa, where health care workers are especially at risk.

If a tenth of Jynneos was as effective as a fifth, doses of vaccine would double on an international scale, especially aiding countries where Clade I circulates, Fauci said.