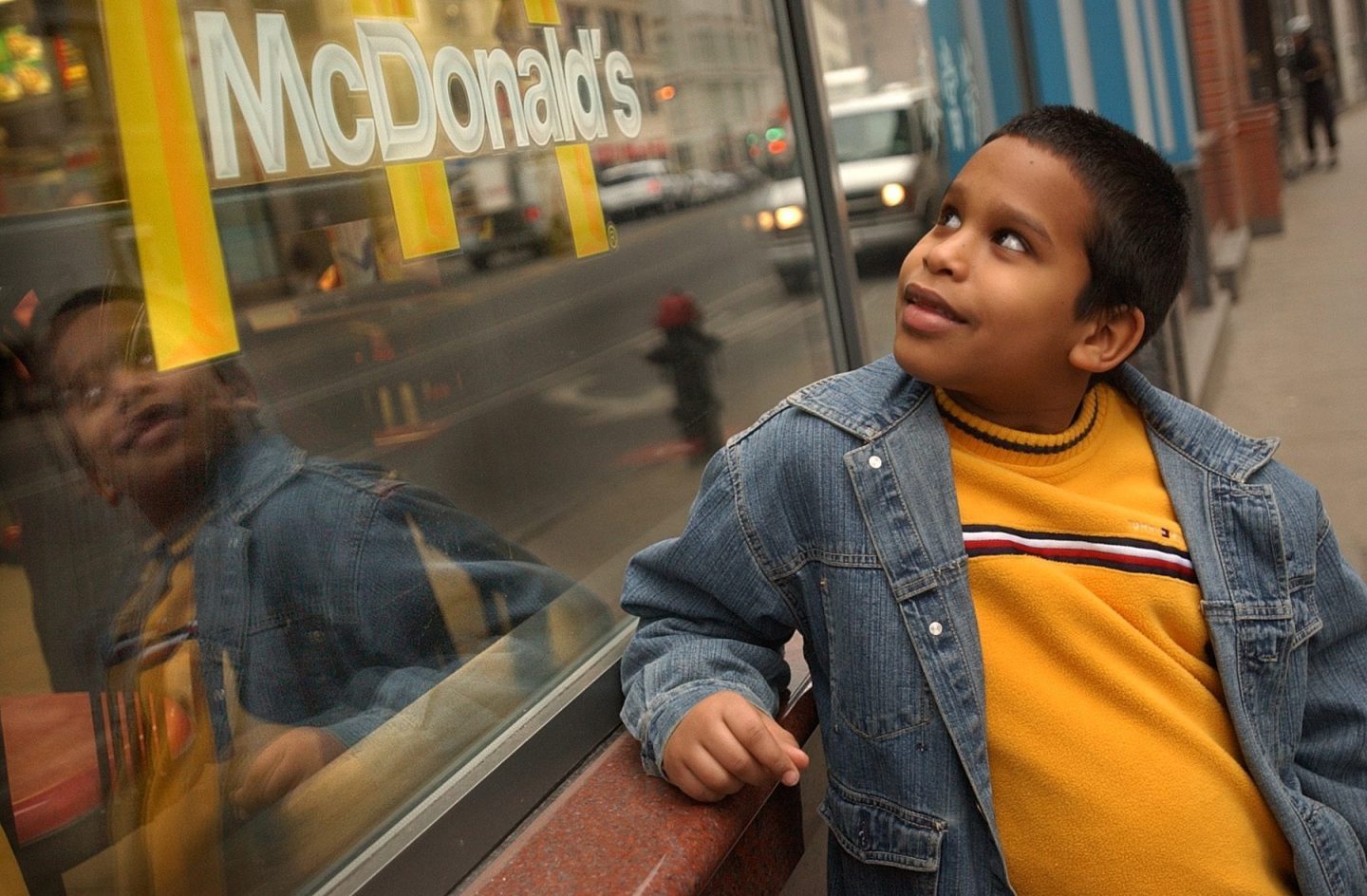 “Nostalgia, it’s delicate but potent,” said Mad Men’s Don Draper as he pitched a concept for Kodak slides. In his famous speech that aired in late 2007, just as Wall Street banks were beginning to wobble under the weight of mortgage-backed securities, the iconic advertising executive described why brands look to the past.

“Nostalgia,” he said, is a Greek word that means “the pain from an old wound, it’s a twinge in your heart, far more powerful than memory alone,” as he scrolled through pictures of his blissful family in the New York suburbs. “It takes us to a place where we ache to go again,” he said to a spellbound boardroom.

In tough economic times, in other words, nostalgia sells. And McDonald’s has learned from Don Draper in 2022, taking generations in a time machine all the way back to the ‘90s.

When the fast-food giant partnered with streetwear brand Cactus Plant Flea Market to sell adult Happy Meals last month, complete with a limited-edition toy, the Golden Arches’ fan base went wild. Shortly afterward, the fast food chain relaunched its iconic collectible Halloween Pails, which first made an appearance in 1986. The strategy was intended to reel in Gen Z and millennials nostalgic for the McDonaldland of their childhoods, as well as older customers who enjoyed Happy Meals when they were first served 40-plus years ago, a McDonald’s USA spokesperson told Fortune.

But while these Happy Meals brought back childhood memories for some, the frenzy wreaked havoc for workers swamped with orders. “New adult Happy Meals are killing me,” a user posted on the McDonald’s employees subreddit.

“We ran out of boxes the first day we had them, ran out of toys the second, and on the third day we had to say the truck doesn’t come till tomorrow,” wrote another commenter elsewhere on the subreddit. “It’s been…not fun.”

Some disgruntled customers who couldn’t get their hands on a meal took to eBay, where adult Happy Meal toys were going for as much as $300,000 a pop.

It’s not the first time one of McDonald’s throwback product rollouts was met with more excitement than anticipated. The revival of Pokémon Happy Meals in 2021 also created a secondary market where trading cards were being flipped for outsize prices.

But the mayhem over all these Happy Meals are never really about the Happy Meal, says Clay Routledge, a psychologist who specializes in nostalgia. “The Happy Meal is an effort to get to something else,” he tells Fortune. “There is something you want in life, and a Happy Meal is a way to kind of grab onto it.”

That something is the past, and it says a lot about where our heads are after years of pandemic-related chaos and economic precariousness.

The pandemic has elicited a wave of nostalgia

Nostalgia provides us with comfort amid fear and uncertainty regarding the future. It’s a natural reaction to the past couple of years because nostalgia is a social emotion centered around memories that make us feel more connected, says Krystine Batcho, a professor at Le Moyne College who researches nostalgia. Stress over a looming recession, rising inflation, and residual COVID-19 anxiety have all created a prime opportunity for McDonald’s to unleash a wave of nostalgia-related offers and products that tapped into our desire for levity and a return to simpler times.

“Today with all the turmoil, there’s so much that we’re unsure of,” Batcho tells Fortune. “That is the perfect storm for nostalgia.”

People of all ages can be nostalgic, but developmental transitions can be important triggers, such as late adolescence, early adulthood, and retirement age. Batcho notes that trading in childhood for independence creates a tendency to look back at moments of security. Since nostalgia is so tightly wound to trust—something that has markedly decreased during the past couple years—we’re more likely to reminisce on our childhoods, which Batcho says is often the only time in life we fully trusted someone.

It’s no wonder, then, that Gen Z, millennials, or even retiring baby boomers went running for adult Happy Meals. “At the broad society level, when a culture is going through a big transition, you see consumer nostalgia really go up,” Routledge says.

The disconnect of the Happy Meal

Companies have been leaning heavily into nostalgia to sell more products during the pandemic, a calculated move to speak to our exacerbated feelings of warmth toward pre-COVID times.

But getting the right marketing campaign can be tricky when it involves tugging on people’s emotions.

There’s also a danger of overplaying one’s hand and oversaturating the market: “It’s very complex because there’s a genius to getting the right mix,” Batcho explains, pointing to Subaru ads and the popularity of the Top Gun sequel as successful examples.

Effective nostalgia isn’t about a concrete thing, but the emotion behind it. That was one of the issues with the adult Happy Meal, Batcho says: It targeted a specific kind of audience, rather than the experience itself.

Acting on nostalgia can also lead to disappointment when we discover that the reality of it doesn’t re-create our childhood. Such was the case with the adult Happy Meal.

“I am a surgical resident and an adult,” tweeted Eric Pillado, “But yes, I did order a Happy Meal because it came in a Halloween bucket. And I’ve never been more content. And yes, I expressed my frustration that they were out of the pumpkin one.”

Such frustration destroys “nostalgic value,” Batcho says. A scarcity mindset can make nostalgic purchases tenuous. If the customer perceives the company to be deliberately shortchanging them or not putting enough product out, they might lose their trust in the company. Thus, some customers may have viewed McDonald’s offering as a deliberate attempt to create a competitive market. As Batcho puts it, “Once you get angry, the nostalgia is gone.”

In a strange way, this craze was a sign of optimism

The backlash to nostalgia is the idea that it’s a type of arrested development, feeding into the narrative that Happy Meal customers are avoiding adulthood. But the nostalgia is more about trying to regain that childlike hope, says Routledge; in that sense, the silliness of this craze is actually a sign of brighter things to come.

Routledge adds that nostalgic people are often fueled by good memories, which gives them momentum to move forward. It’s restorative, he says, adding that studies show that nostalgia makes people more optimistic, hopeful, and confident they can accomplish their goals.

Adult Happy Meal lovers also enjoy the merits of intergenerational bonding. “It just makes the adult feel the good feelings they had as a kid,” Batcho says. “But now they can pass that on and take their child or their grandchildren for a Happy Meal.”

Granted, the endless access to nostalgia the internet provides can sometimes make it less authentic. Routledge says that while nostalgia is adaptive, technological-driven nostalgia can be less so. “A Happy Meal craze or something like that isn’t really going deep enough into what makes the nostalgia meaningful; it has more of a superficial element to it,” he says, adding that it’s like a fast solution to nostalgia. Even though it may be tied to a personal memory, “it’s not a very nutritious source of nostalgia.”

But this surface-level nostalgia of buying the same plastic toy can help bridge the cultural connection gap humans crave so much, he explains.

Beyond connecting, it’s nice to be goofy. “It’s good that it shows that we remember that we can deal with the silly and the superficial and the just plain fun,” Batcho says. “That’s why childhood was so precious in the first place.”

Who knew a waxy Grimace figurine could be a sign of our hope for the future? Or as Don Draper would say, a place where we know we’re loved.