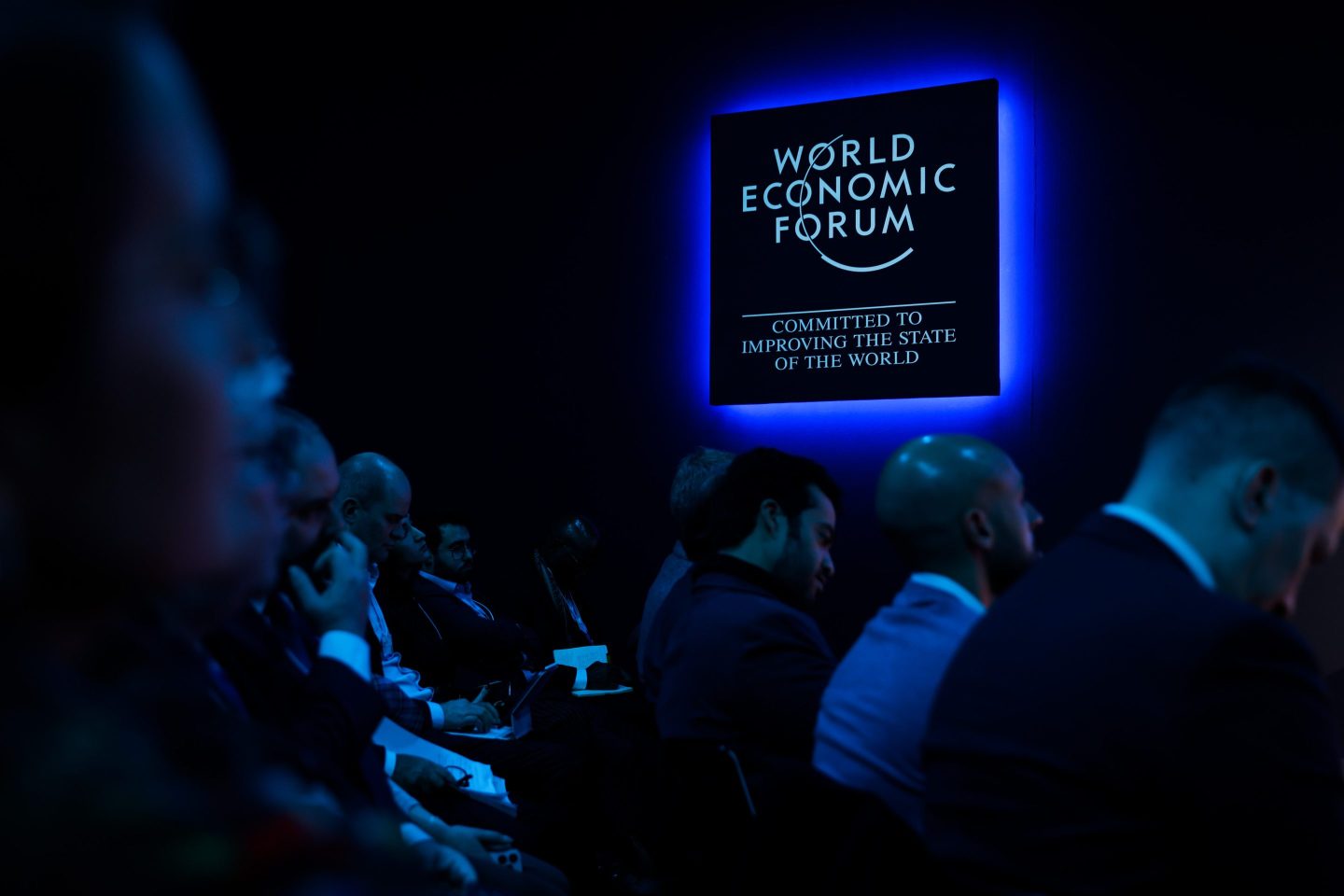 World leaders from government and business gather at the World Economic Forum in Davos this week.
Stefan Wermuth—Bloomberg/Getty Images

Climate change has provided an unseasonably temperate backdrop for the annual World Economic Forum meeting in the normally snowy winter resort town of Davos, Switzerland this week. While the snow is scarce, analysts and think tanks have released their usual flurry of economic reports to dig through in time for the event.

Among them, consultancy Accenture has released its 12th annual United Nations Global Compact-Accenture CEO study, surveying thousands of global CEOs on their progress in implementing the UN’s sustainable development goals (SDGs)—a set of 17 growth targets the UN established in 2015 that cover various environmental and societal issues.

Simply put, the current situation is not great.

“There is a sense that, as we reach the midpoint of the 2030 Sustainable Development Goals and the 2030 Paris Agreement milestones, we’re definitely not winning,” says Peter Lacy, global sustainability services lead and chief responsibility officer at Accenture.

According to Accenture’s study, 83% of CEOs feel that current levels of geopolitical instability limit the world’s ability to achieve the SDGs. Over 90% of CEOs lament they are facing 10 or more concurrent existential crises to their businesses—including inflation, talent scarcity, public health crises and (in fourth place) climate change—and that the complexity of those compound problems is hindering their own work on sustainability.

CEOs in the survey also overwhelmingly feel they are receiving “limited” support from governments, with 90% of the 2,600 respondents claiming that lack of government action is limiting how effectively companies can respond to sustainability challenges. CEOs, Accenture says, “are ready to act, but feel governments’ short-term focus is inhibiting progress.”

Frankly, my read on the Accenture report is that many business leaders—most of whom champion the notion of free markets and the role of business in leading improvements to societal woes—are still engaging in a disingenuous level of finger pointing at governments, insisting that policymakers need to act first before businesses can actually step up and lead.

Accenture reports that 93% of business leaders say the “short-term focus of governments…discourages finding long-term solutions for complex global challenges,” and CEOs, according to Accenture, are urging policy makers to provide “clear direction” on sustainability.

Yet the 2030 Sustainable Development Goals and the 2050 Paris Agreement goals are both clear directions, with long-term deadlines that businesses are on track to miss as the short-term interests of shareholders, not governments, typically discourage businesses from investing in long-term returns. Meanwhile, major economies have pledged hundreds of billions in climate funding through schemes like the U.S. Inflation Reduction Act, or the EU green deal, providing financing for businesses to progress on sustainability goals.

I put my view to Lacy, and he disagreed that CEOs are simply passing the buck onto governments. Lacy reads the report as showing that the challenges the world faces requires “a new era of collaboration” between the two worlds of government and business.

“They’re not pointing the finger at governments and saying there’s nothing they can do themselves, but they are saying—in terms of the speed and scale that’s required to bring all companies in line with industry leaders—that will require clarity on regulation, reporting, policy standards, and other issues from government,” Lacy says.

Perhaps this year’s Davos will be the one to usher in that new era of collaboration.

The U.S. Federal Reserve has given the country’s six largest banks until August to show the impact that climate change could have on their operations, as part of the regulator’s pilot climate change stress test for financial institutions. The banks will have to evaluate the potential disruption disastrous events such as floods, wildfires, hurricanes, heat waves and droughts could have on their loan portfolios and commercial real estate holdings. CNBC

The United Arab Emirates, the host of this year’s COP28 summit on climate change, has appointed the head of the Abu Dhabi National Oil Company, one of the world’s largest oil companies, to lead the climate talks. Climate groups are demanding Sultan Ahmed Al Jaber step down from his role as CEO of the oil company to avoid a conflict of interest in heading COP28. BBC

A new paper in the journal Science shows scientists working for oil giant ExxonMobil predicted that burning fossil fuels would increase global temperatures with a startling degree of accuracy, starting in the 1970s. Previous reports have revealed Exxon ignoring its own internal findings on climate change, but the new data analysis shows Exxon’s early predictions of global temperature increases align closely with current trends. Exxon has denied it misled the public on climate change. CNBC

Exxon is launching a $2 billion expansion project at its refinery in Beaumont, Texas, ramping up production to become the second largest oil refinery in the U.S. The project will be the first major expansion to U.S. refining capacity in nearly a decade at a time when the country’s stockpile of diesel and gasoline is at a five-year low. President Joe Biden has been calling on oil companies to increase production this past year after oil prices surged to record highs. Reuters

At Davos, a sidelined club laments tax ‘hypocrisy’ as the richest talk climate instead by Peter Vanham

Heathrow CEO to Davos: ‘The wealthy people in this room’ need to pay even more to make flying greener by Chris Morris

Electric vehicles accounted for 10% of all new car sales in 2022, according to preliminary research from market trackers LMC Automotive and EV-Volumes.com, crossing that threshold for the first time. Globally, automakers sold 7.8 million fully-electric vehicles, with China leading the market, followed by Europe. The U.S. is trailing behind.