Joe Manchin’s ‘Inflation Reduction Act’ might not reduce inflation. Here’s what it will do instead 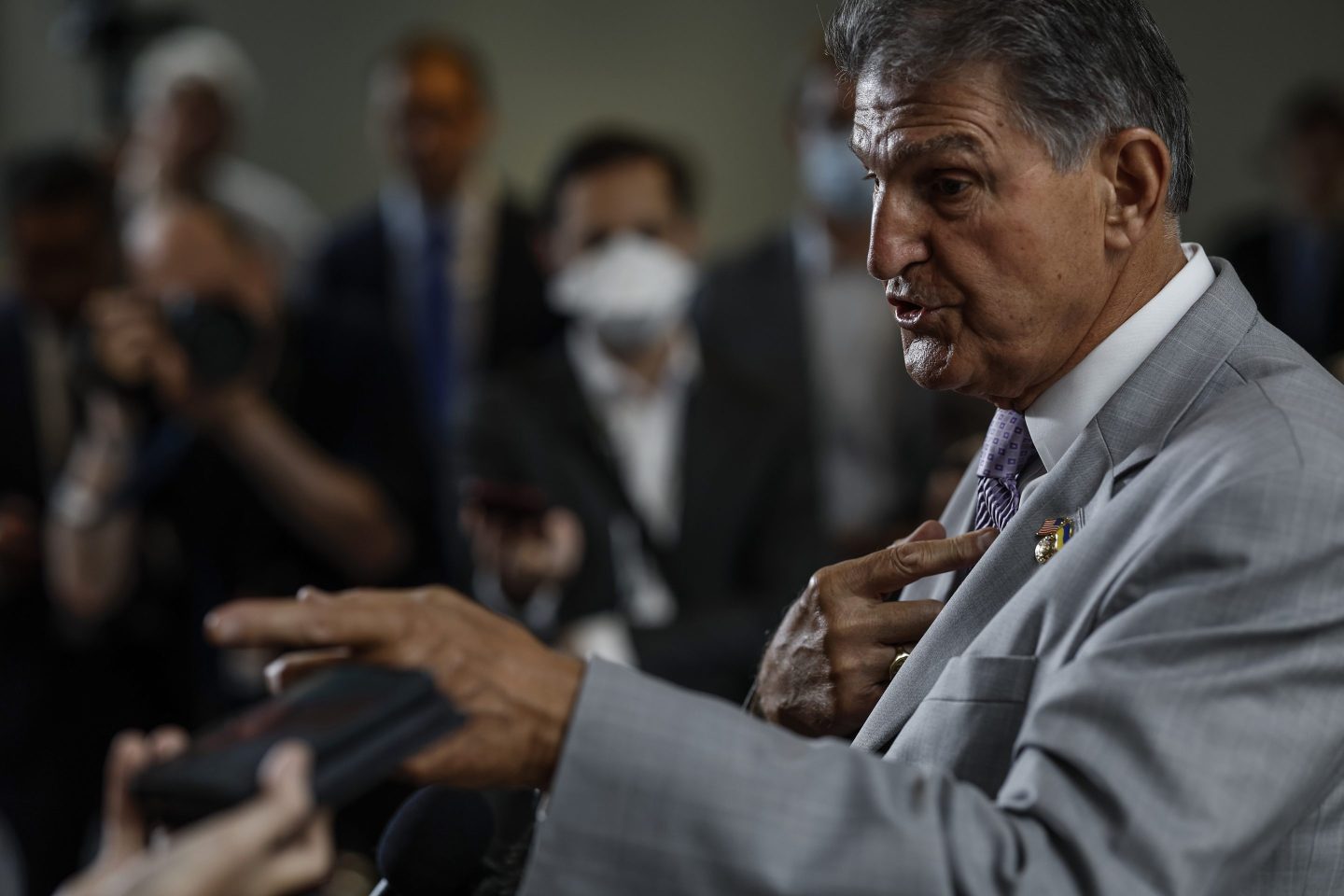 Just how low does climate change rank among the concerns of U.S. voters? Look no further than the rebranding of the Democrats’ landmark climate legislation—which was reinvigorated last week when Sen. Joe Manchin (D–W.Va.) reversed his stance on the bill—as the “Inflation Reduction Act.”

The new attention-grabbing name has forced politicians and pundits to defend the pivotal bill—dubbed “game changing” by the Environmental Defense Fund—as a tool for reducing inflation, rather than champion its importance for combating climate change.

The Inflation Reduction Act, if it passes Congress through reconciliation, is the most significant action the U.S. has taken against climate change. The bill earmarks $369 billion in spending and tax credits for green projects, including $260 billion in tax credits to incentivize clean energy projects, $80 billion in consumer rebates for electric vehicle purchases and climate-focused home renovations, as well as a $1.5 billion incentive for oil and gas companies to reduce methane emissions.

(The bill isn’t all good. It includes plans to extend lease sales for new oil and gas exploration, which could lock in future emissions. The reward for gas giants reducing methane leak could also lead to some dubious bookkeeping tricks to keep that methane off the oil major’s ledger.)

The Biden administration intends to use income generated by a minimum 15% corporate tax, included in the Inflation Reduction Act, to raise $739 billion to fund the bill while also reducing the government deficit. The plan, if complete, could cut carbon emissions 40% over 2005 levels by 2030, putting the U.S. closer to Biden’s goal of halving emissions by the end of the decade.

But will it reduce inflation in the U.S.? The general opinion is no. Or, at most, not by much.

Last Friday, Wharton economists estimated the Inflation Reduction Act will likely increase inflation 00.5 percentage points over the next few years, before causing a decline of around 0.25 percentage points in the latter half of the decade. Overall, the economists said, the bill’s impact on inflation would be “not statistically different from zero.”

In a review, Moody’s Analytics concluded that the bill’s “impact on inflation is small” while Jason Furman, a Harvard economist and former chair of the White House Council of Economic Advisers under former President Barack Obama, told the New York Times he thinks the bill will lower inflation but not “by a lot.”

If you label a bill an “inflation reduction” act and then fail to reduce inflation, that looks bad. But the fact that the historic climate bill will fund billions of investment in renewable energy while also having “zero” impact on inflation—shifting it neither up nor down—should be great news for Americans browbeaten by both record high inflation and record high heat waves this past month.

Energy accounted for roughly 9% of U.S. consumer price increases this past year. Over the long term, investing in renewable energy will fend off future fits of inflationary highs.

While fossil fuels are a finite resource that grow scarce and more difficult to extract over time, increasing costs, wind and solar installations, although still dependent on mineral extraction, don’t deplete in the same way. Increasing domestic wind and solar energy capacity will also leave the U.S. less susceptible to oil price shocks, like the one caused by Russia’s war in Ukraine.

So perhaps the inflation reduction act will live up to its name after all. But, despite its name, what the bill does to wean the U.S. off of carbon is much more important.

P.S. The bill includes a provision that limits EV tax breaks to only vehicles whose critical battery components are sourced or processed in a country that has a free trade agreement with the U.S. If you know which EV suppliers that would exclude, please write me.

Australia’s leading Labour government introduced its Climate Bill last week, seeking to enshrine in a law a commitment to net-zero carbon emissions by 2050 after a 43% reduction over 2005 levels by 2030. But the Green party, whose support Labor needs to achieve a majority in the Australian Senate, is negotiating to increase that 43% target and impose a moratorium on new coal and gas projects. AFR

The EU’s regulatory body has postponed indefinitely its plans to create a framework for defining the Social aspect of Environmental, Social and Corporate Governance (ESG) rankings, as rule makers balk at embarking on the politically fraught journey. The “Social” aspect of ESG would tackle issues such as workplace gender equality and forced labor in supply lines, but also whether stocks in weapons makers should be included in ESG portfolios. The EU recently approved gas and nuclear power as sustainable investments, under the E category, roiling some member states. Bloomberg

Last week, Saudi Arabia released new promotional videos and artist renderings for its proposed “sustainable” city, Neom—a 100-mile long, 500-meter high, mirrored glass wall of enclosed living space, stretching along the Red Sea and into the desert. The $500 billion city is the pet project of Crown Prince Mohammed bin Salman, who has reportedly referred to the undertaking as “my pyramids.” Appropriately, for a scifi concept that few professionals see coming to fruition (despite numerous consultancies cashing in on the dream), the pyramids were lavish tombs. What could go wrong with building a 100-mile long mirror in the desert? Slate

Amazon said its carbon emissions skyrocketed 18% in 2021, resulting in a 40% increase since 2019, when the company first began reporting data in an annual sustainability report. That year, Amazon pledged it will become a net-zero emitter by 2040, but the pandemic-era surge in demand pumped up emissions faster than Amazon can curtail them. Bloomberg

Bill Gates was among a ‘wide range’ of CEOs and labor bosses who lobbied to change Manchin’s mind on the Inflation Reduction Act: report by Erin Prater

What boards actually think about ESG proposals by Lance Lambert

Europe’s largest energy company, Shell, reported record profits for the second quarter in a row last week, as the war in Ukraine and climate-induced power shortages have propelled oil and gas prices skywards. Shell (formerly Dutch Shell) reported $11.5 billion in earnings in the second quarter, up from a record-setting $9.1 billion in the first. Shell CEO Ben van Beurden attributed its profits in part to government policies that discourage investment in fossil fuels, saying those policies have inflated oil prices. Shell plans to reward its faithful shareholders with a $6 billion stock buyback in the third quarter, after completing a $8.5 billion buyback in the first half. Hot on Shell’s heels, BP tripled profit in Q2 to deliver $8.5 billion in earnings, its highest in 14 years.