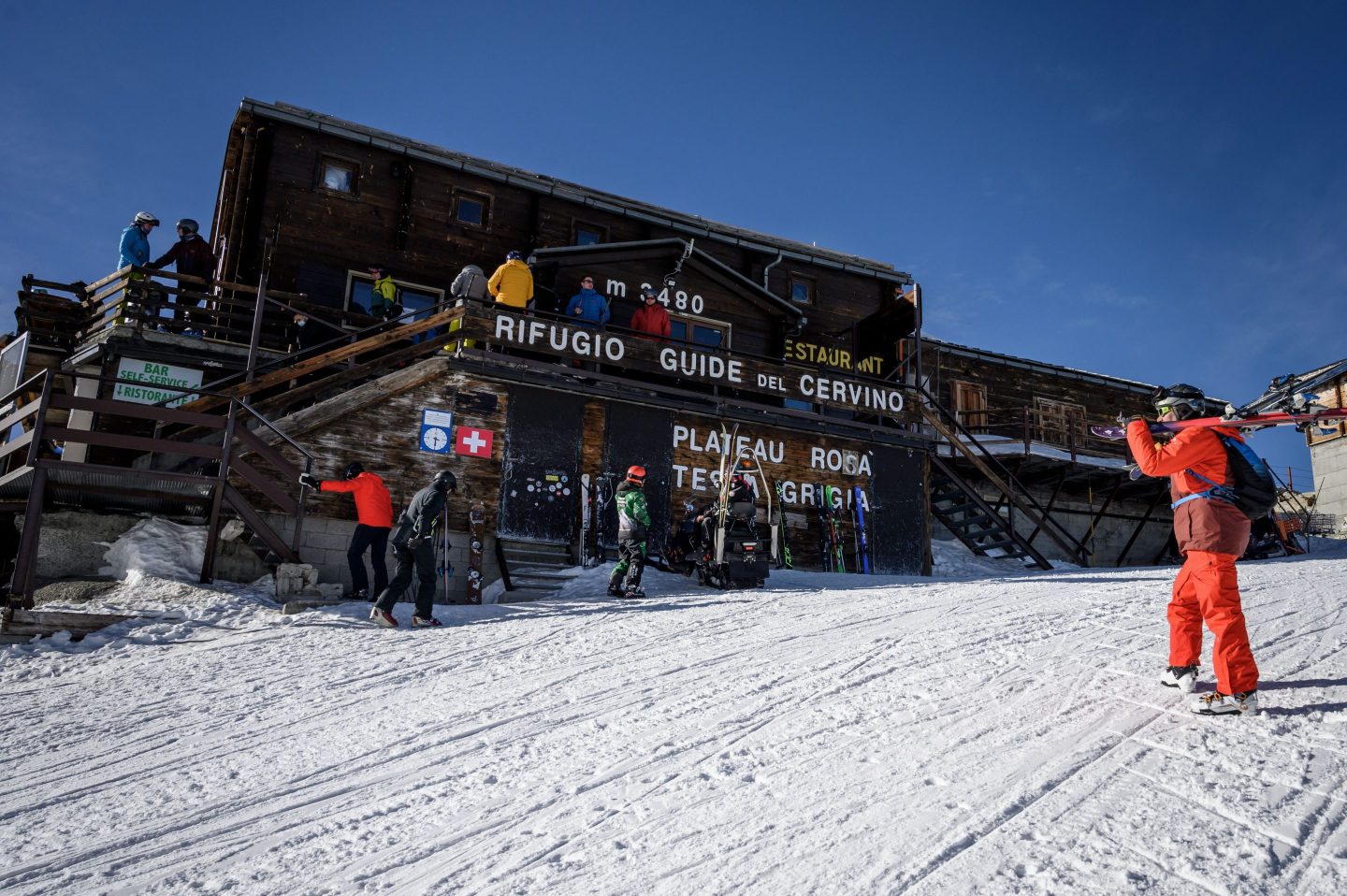 The Guide del Cervino mountain lodge is in Italy and Switzerland because of climate change.
Fabrice Coffrini—AFP/Getty Images

The consequences of melting ice sheets and glaciers are many. They can raise sea levels, deplete freshwater resources, and make species disappear forever.

This consequence of climate change and receding glaciers is playing out in real-time in the snowy Alps between the Italian town of Cervinia and the Swiss canton of Zermatt, where the borderline between the two countries has become increasingly murky due to the accelerated melting of the region’s resident glacier.

And caught in between the shifting borders lies the fate of an Italian mountain lodge, the majority of which now stands on Swiss territory.

Officials from both countries are working on redrawing a 100-meter stretch of the border, Agence France-Presse reported this week, with potentially important economic ramifications given the area’s popularity amongst skiers.

The Theodul Glacier—most of which lies in Switzerland—sits on the site of the Theodul Pass, a popular ski area that marks the frontier between Italy and Switzerland.

The actual border between the two countries lies on the glacier’s drainage divide, an identifiable line that marks the point where the ice’s meltwater flows down one side of the mountain or the other, or in this case down the Swiss side or the Italian side.

But the Theodul Glacier’s steady retreat over the past years has shifted that divide, having lost over a quarter of its mass between 1973 and 2010, according to AFP. And the divide now lies directly underneath the “Guide del Cervino,” a popular ski and mountain lodge and refuge.

The lodge was built in the 1980s entirely on Italian land, according to Italian outlet La Repubblica. But now, given the glacier’s changing physiology, around two-thirds of the refuge is now technically in Swiss territory.

Talks last year between Italian and Swiss authorities over the lodge’s fate ended on a reportedly positive note, although concessions were made by both sides, the details of which will not be revealed until the Swiss government approves the deal next year.

The territory in question is not “worth too much,” Alain Wicht, the chief border official at Switzerland’s national mapping agency Swisstopo, told AFP, but he added that it is the first time a physical structure has been involved, and economic considerations are in order given the popularity of the area among skiers and mountaineers.

The Italian town of Cervinia and the lodge are known for their proximity to the Testa Grigia mountain, a popular destination for skiers and alpinists. A project involving new cable car links has also reportedly been in the works to better connect the lodge with surrounding towns, according to La Repubblica.

The Italy-Switzerland border dispute is far from the only time warming temperatures have had an impact on redrawing political boundaries, and in fact, it isn’t even the only time an Italian border has been affected.

For reasons very similar to those behind the shifting border at “Guide del Cervino,” Italy’s alpine border with Austria is also undergoing a change due to the receding Grafferner Glacier, upon which the border lies.

In 2006, Italian and Austrian authorities even introduced the legal concept of a “moving border,” which takes into consideration environmental changes to borders once thought stable.

Countries who have borders that rely on natural structures and landmarks that have remained largely unchanged for millennia—such as glaciers or riverbeds—will likely have to contend with redrawn border lines as global temperatures continue to warm.

The Indus River in South Asia makes up part of the border between India and Pakistan, and the two countries struck a deal in the 1960s that allows both to benefit from the river. But the river’s headwaters are in Indian territory, fed by a glacier that is itself rapidly retreating as well.

The changes of the Indus headwaters could mean a radically reduced water availability and changes to the hydrology of the river used to mark the border itself.

The risks facing the Indus River have pushed scientists and experts to issue warnings on the state of the border and water security in the area, and have called for a reassessment of the border agreement between India and Pakistan to more fully address potential climate risks.