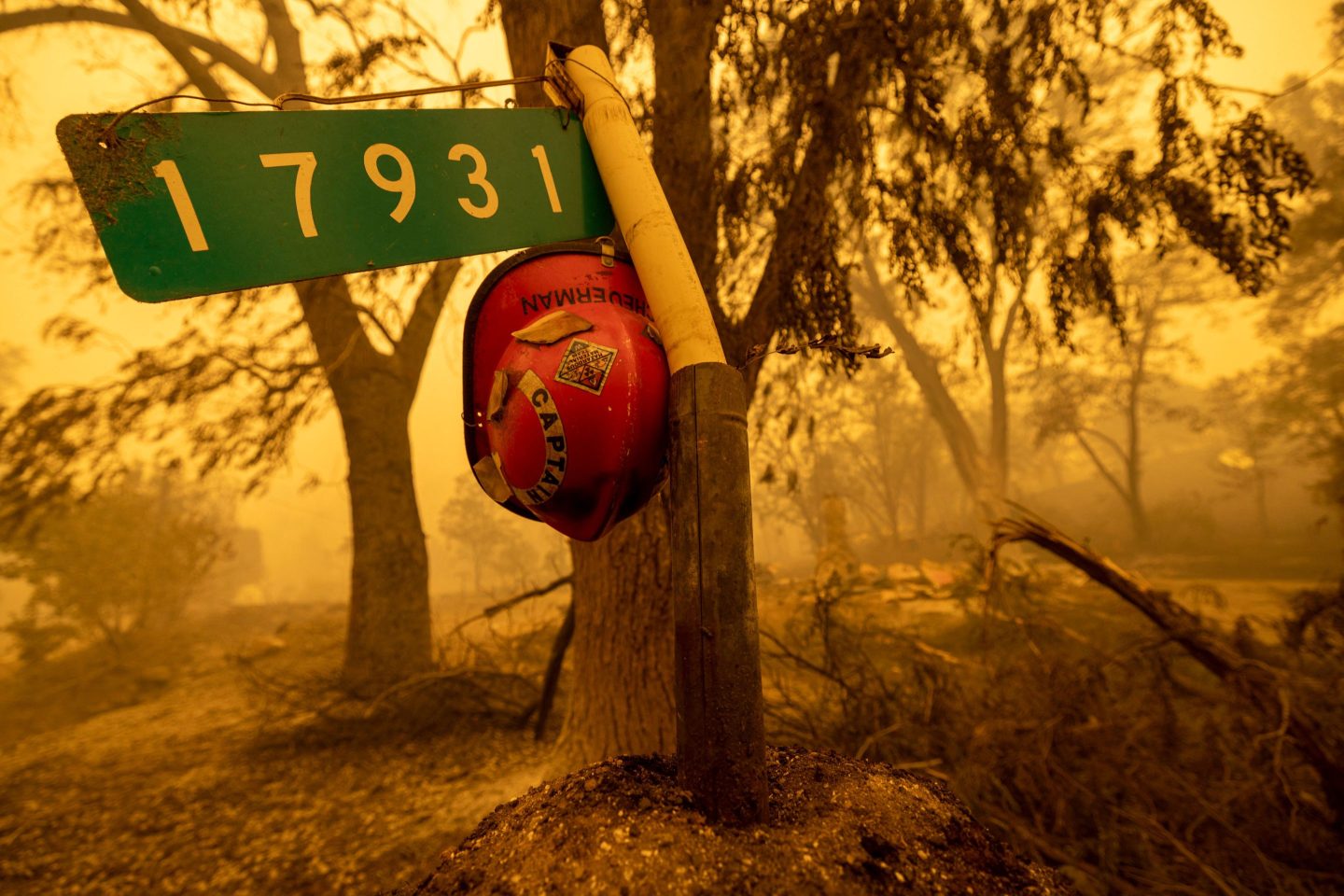 A firefighter helmet hangs at the entrance to a property in the community of Klamath River, which burned in the McKinney Fire, California, on July 31, 2022
David McNew—AFP/Getty Images

There is a critical gap between how the scientific community and the public conceptualize the consequences of human-caused climate change, as new research suggests we are ignoring the truly worst-case and catastrophic risks.

The consequences of climate change—from record-breaking heat waves in Europe to devastating wildfires in the U.S. this summer alone—are forcing themselves to the forefront of people’s attention.

But as bad as things are, some scientists are warning that we might be missing the point on even bigger and more existential risks to humanity if the world doesn’t get its act together on containing human-caused planet-warming emissions.

In a new paper, researchers from institutions including the University of Cambridge and China’s Nanjing University argue that the worst-case scenarios of climate change are being “dangerously underexplored” by the scientific community.

According to the authors, the possibility of “worldwide societal collapse or even eventual human extinction” is not completely out of the question, as current rates of warming “may surpass thresholds that triggered previous mass extinctions” in the past.

Due to planet-warming particulate emissions caused by humans since the Industrial Revolution, temperatures are now 1.1° C (1.9° F) higher than they were at the end of the 19th century, and could increase by 1.5° C (2.7° F) as early as the next decade, according to the Intergovernmental Panel on Climate Change (IPCC).

Hitting this point will cause shifts that would “persist for centuries to millennia and will continue to cause further long-term changes in the climate system,” the IPCC has warned, including sea level rise, coastal erosion, heat waves, and climate-related risks to health and livelihoods around the world.

The climate impacts of hitting 1.5° C or even 2° C worth of temperature rise are well-documented by the IPCC, which is considered the top international authority on climate change impacts, and provides regular scientific assessments by assembling and reviewing the latest climate science studies from around the world.

But beyond that, there is a precarious lack of knowledge and perspective on the consequences of climate change on humanity, the authors of the new paper warn.

The writers note that there have been relatively few IPCC analyses and estimates of potential climate change impacts should temperature rise exceed 3° C (5.4° F), with the panel having gravitated in recent years to focus more on the consequences of temperature rise around or below 2° C.

But that is ignoring the fact that further temperature rise is still very much possible, and it is in fact the trajectory the planet is on.

Today’s official environmental policies around the world put us on track for 2.7° C of temperature rise before the end of the century, according to independent research group Climate Action Tracker.

According to the paper’s authors, using new climate models in their research, temperatures could conceivably rise to 3.9° C before the end of the century, which would entail “catastrophic” changes to the global climate and existential repercussions for humanity.

Using a medium-high-likelihood scenario of continued greenhouse gas emissions and population growth over the next several decades, the authors concluded that as many as 2 billion people could be living in parts of the world where temperatures regularly exceed 29° C (84° F) by 2070, up from 30 million today.

Most of the countries affected by temperature rise will be relatively “fragile” states, with higher rates of poverty and more vulnerable to higher temperatures, which could quickly lead to a “belt of instability” and even “unravel societies across the globe.” Rapid temperature rise could become an amplifier of several other crises, the authors write, including international conflict, famines, and infectious disease spread.

The authors argue that a persistent gap in the discussion on climate change is that labels such as “catastrophic climate change” or “existential risk”—the latter of which has been used multiple times by UN Secretary General António Guterres—have so far not been adequately defined.

In the paper, the authors called on the IPCC to sign off on a new special report—similar to what the panel produced to specifically outline risks tied to 1.5° C of temperature rise—that would provide a clear framework on what the more “catastrophic” impacts of climate change would involve.

This would improve the performance of current climate models, and inform scientists as to what new technologies and measures will be necessary.

The authors noted the risk of “fear-invoking” messaging surrounding climate, which could inspire more instances of climate doomism—a sense that the situation is beyond anyone’s control and little can be done to rectify it.

To avoid this, the researchers recommended depoliticizing climate rhetoric and ensuring that messengers are considered trustworthy by the public.

The authors lamented that the scientific community has so far avoided focusing on “catastrophic” climate impacts, and that only popular science sources have been able to capture this messaging in recent years.

The 2019 book The Uninhabitable Earth by New York Times columnist David Wallace-Wells painted a picture of an Earth completely ravaged by worst-case scenario climate impacts, while the 2007 book Six Degrees (updated with a new version in 2020) by British journalist Mark Lynas charted the increasingly chilling known potential effects of temperature rise ranging from 1° to 6° C.