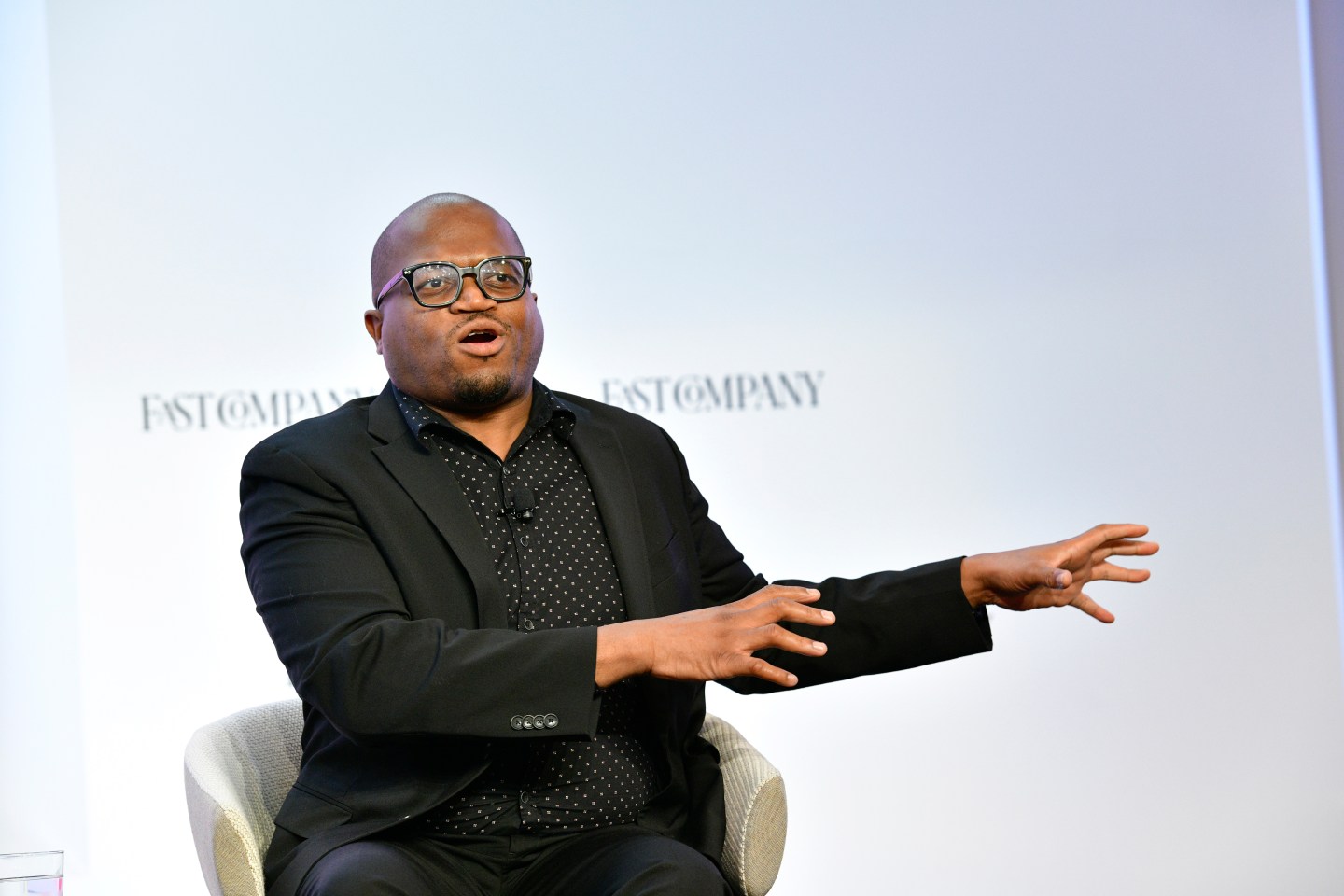 Happy Friday. It’s also Veteran’s Day in the U.S. and Remembrance Day in Canada. Sending gratitude to all service members and their families.

As promised, I caught up yesterday with Jamal R. Watkins, the NAACP’s senior vice president of strategy and advancement, who looked remarkably fresh after a long week of midterm drama. While the “red wave” didn’t happen, the typical flipping of political power away from the party in the executive branch didn’t either. It was an affirmation of the times, he said. “I think voters were sick and tired of voter suppression, January 6th [the attack on the U.S. Capitol], and all that.” And now, referring to the close races and potential runoff in Georgia, “we have options.”

When I asked how the mapping collaboration with Esri we discussed on Tuesday went, he called it a revolutionary alignment of justice work and technology.

“One of the things that was a focal point for this cycle was leaning in on voter protection and countering misinformation, disinformation, and supporting voters who face barriers in targeted communities,” he said. The opportunities are always many, but this year, were particularly top of mind.

The result was a new voter protection hub that helped them monitor issues in real-time. On the front end is an issue complaint form, a familiar tool used by voter advocates like Election Protection, a nonpartisan coalition of organizations dedicated to voter access and safety. (NAACP is on the steering committee.) “But what is fascinating is that sometimes the technology doesn’t match the work—so you have lawyers and hotlines taking phone calls, filling out forms, looking at an Excel spreadsheet, and then trying to solve the problem and track it in that way.”

The hub allowed advocates to create a heat map of verified problems, shrinking the time it took to investigate complaints to a fraction of the spreadsheet method.

“Maybe folks are saying on Twitter or Facebook, ‘I’m seeing people with guns and, you know, weaponry around these drop boxes.’” On one hand, Watkins said, it’s just online chatter. “But when you have 10 to 15 individuals fill out a form and put their name and their contact information and say, ‘I have witnessed this,’ it’s a problem.” At that point, election advocates can contact the correct authorities—perhaps the Department of Justice, the attorney general in the state, or a judge—and give them the evidence necessary to greenlight immediate countermeasures.

It also helped them address issues that prevent people from voting, like when a polling place didn’t open on time in Brooklyn, or a perception issue—like when an outsized presence of uniformed police at Georgia polls made voters concerned that there was a problem at their polling place. Using the reports, they were able to ask late-opening polling places to stay open later—which typically happens in rural, Black, immigrant, or otherwise underserved communities—and ask police departments to switch out officers with plain clothes personnel, which helps quell nervous voters. But the big issue is why they need the map in the first place. “The current [voting] system is inherently suppressive,” he noted. Safe drop boxes, mail-in ballots, and extended and weekend hours are possible. “The data and the infrastructure is there to make voting easy and safe for everyone.”

The work is continuing in many ways.

“We have launched a project with the Brookings Institute called the Black Progress Index,” Watkins said. It starts by mapping life expectancy data and noting how the numbers are changing based on where people live. “Is life expectancy going down? Why? Is there a ‘cancer alley’ in your state? Is the heat index now so high that it’s taking a toll on the physical body? Are there no grocery stores?” The maps will give advocates the ammunition they need to better fight for policy change. “If you live in a community where life expectancy is low because crime is high, there are no jobs, and the environment is unhealthy, you should be voting on all of the folks that will bring those interventions and policies to life that will flip those conditions.”

Here’s one thing I didn’t know: the NAACP is considered an NGO by the UN. That creates a significant opportunity for the work they’re doing with Esri to scale globally. There’s a team currently at the UN Climate Change Conference, or COP 27, in Egypt—focused on water access and security issues—and this summer, delegations visited Ghana and Israel. “From a place-based perspective, how can the environmental, climate, and justice policies we advocate for here in the U.S. actually have global impact?” And they continue to partner with domestic groups dedicated to progressive ideals and help them better align their work around place-specific strategies. “In 2019, when we first started playing with Esri an elevated way, we actually were giving away free licenses to community groups to see what they could learn about how the communities they are serving.”

Watkins also has a message for the corporate world, which is one part promise and two parts accountability: Map your ESG (environmental, social, and governance) commitments because the NAACP will be.

“The mapping work we’re doing is going to help shape what those ESG strategies are,” he said. “We’re really scaling that up because we know our communities are much more focused on how to use the tools and the technology to hold corporations and businesses accountable.”

Wishing you a weekend of place-based possibility.

The midterms may not have been red, but they were certainly inclusive, which led to moments of real joy. Several states have their first-ever elected female governors, including Sarah Huckabee Sanders in Arkansas, Kathy Hochul in New York, and Maura Healey, the first woman and openly lesbian governor-elect in Massachusetts. Wes Moore is now Maryland's first Black governor and only the third Black governor elected in U.S. history. Rep. Summer Lee is now the first Black woman elected to Congress from Pennsylvania. And 25-year-old Maxwell Frost became the first Gen Z member to serve in Congress when he won his race in Florida's 10th District. Win or lose, diversity made a mark. “What’s striking about 2022 [is that] a record number of Blacks ran as Republicans, even if only a few have won,” Brown University professor Katherine Tate said in a panel discussion. “The new diversity could move us away from Trumpism.”
NPR, Richmond Free Press

A site of medical torture becomes a place of memory and meaning. J. Marion Sims, once revered as the “father of modern gynecology,” has been returned to his rightful place in history when overlooked scholarship showed that he often performed gruesome medical experiments on enslaved women. Now, artist and activist Michelle Browder has purchased his former facility in Montgomery, Ala. to turn it into a museum and teaching clinic with a focus on the reproductive health of Black women. The clinic will also help train doulas and midwives. “It's a museum that teaches the history of gynecology but also has a primary care unit upstairs where medical students from around this country can come,” Browder said. “If there are some uninsured women that need support, we're going to be able to give them that.” Last year, Browder created a park in honor of three enslaved women known as Lucy, Betsey, and Anarcha, who were tortured by Sims.
Montgomery Advertiser

Spend some time with Stevie Wonder on the 50th anniversary of his landmark album Talking Book. It marked Wonder’s full arrival on the music scene—a runaway hit that was deeply felt, an unapologetic mix of genres, social consciousness, and soul. Learn why it mattered, and more importantly, to whom it mattered—everyone from Dionne Warwick to David Sanborn to Esperanza Spalding. “It’s the lack of hiddenness in the music; the heart is really at the surface,” artist Corinne Bailey Rae told the New York Times. “There’s classic arrangements and harmonies, and then what he brings to it with his folky, psychedelic take on jazz. It’s such an honest love song,” she said.
New York Times

"The Black man in the Black community has to be re-educated into the science of politics, so he will know what politics is supposed to bring him in return. Don't be throwing out any ballots. A ballot is like a bullet. You don't throw your ballots until you see a target, and if that target is not within your reach, keep your ballot in your pocket."