The historic crypto bubble: Bitcoin is now the fifth-biggest wipeout of all time, BofA says, with a shocking chart of the last 50 years in finance 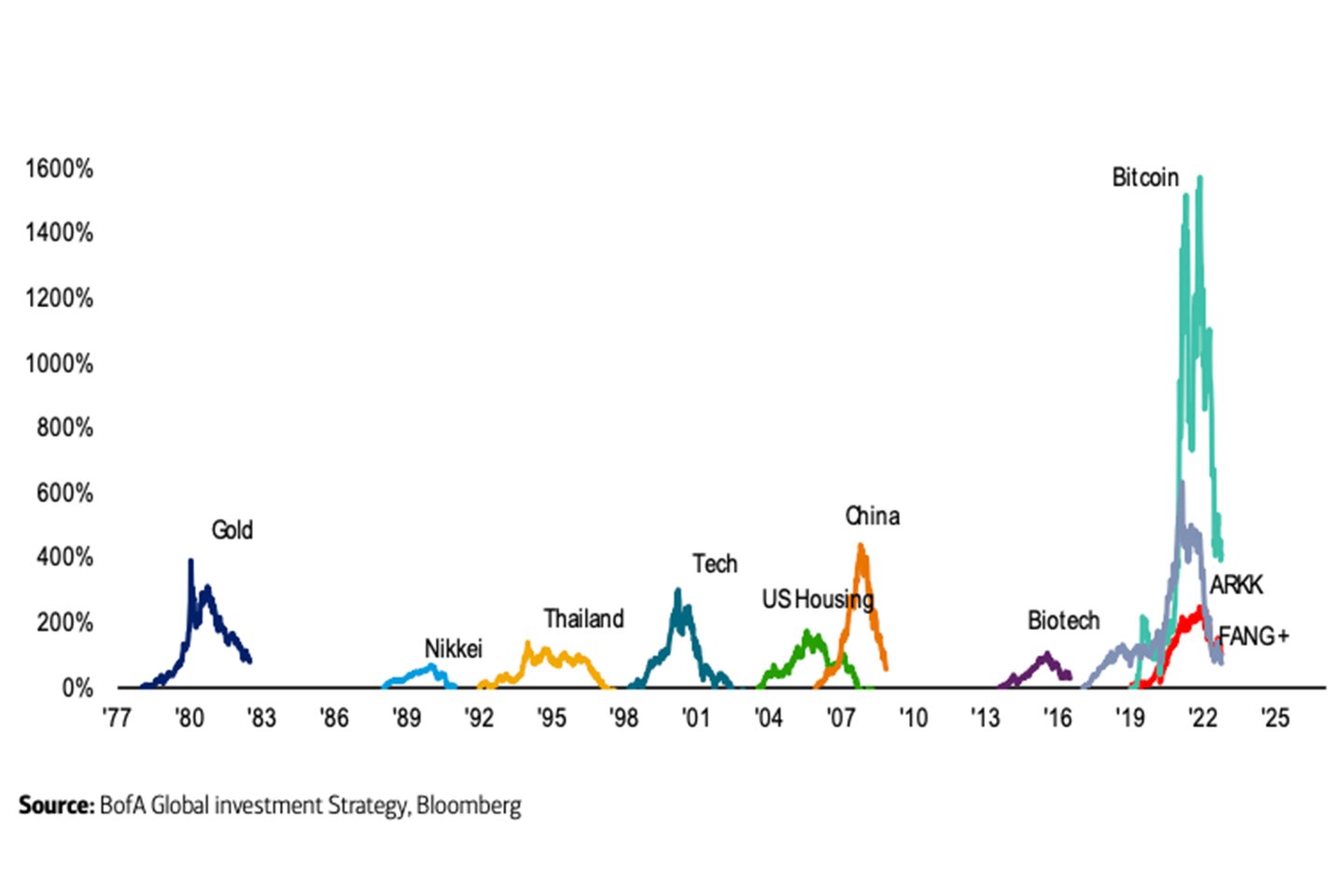 Bitcoin has dropped 77% from its trading peak in November of last year.
Courtesy of Bank of America

The crypto industry is once again feeling the chill of winter.

Bitcoin is experiencing one of the biggest crashes in history—that’s apparent. But Bank of America Research’s Flow Show research note has crunched data and put it in historic terms: It’s the fifth-worst collapse of an asset in financial history, nearly as great in scale as the Mississippi & South Sea Co. History buffs would know that episode better as the South Sea Bubble, and it was so long ago—the early 1700s—that the United States did not yet exist and the U.K. was involved in the War of the Spanish Succession.

Bitcoin, which makes up 41% of the crypto market, hit lows unseen seen since the depths of the pandemic two years ago. And although it rallied after May’s Crypto Winter, a market downturn is back in full force with FTX’s implosion that’s led the crypto exchange to file for bankruptcy, and founder and CEO Sam Bankman-Fried to resign—a far cry from a few months ago when he was likened to J.P. Morgan for his attempted rescue missions of distressed firms.

BofA’s research, based on Bloomberg data, finds that Bitcoin’s fall is the fifth largest on record—and by far the biggest crash since the 1970s.

Courtesy of Bank of America

Bitcoin has seen a 77% decline from its peak trading at $70,000 in November of last year in the aftermath of FTX’s fall. Meanwhile, the crypto market cap has plummeted from $3 trillion to $900 billion.

It’s reminiscent of the dotcom bust from two decades ago, which BofA estimates at a decline of 76% (just 1% lower than Bitcoin’s fall) from its peak in March 2000. The dotcom bubble was fueled by investments in online companies from the day when the internet was new, during a bull market in the 1990s. The Nasdaq index grew rapidly, but in 2000 the bubble burst when companies that had raised a lot of cash but didn’t have much in the way of a business plan essentially just ran out of money. Nasdaq’s fivefold growth fell with the crash, and billions of dollars were lost. Crypto critics argue the similarities are obvious.

Another great bubble that just beats out Bitcoin is the end of the roaring ’20s and “Black Monday,” the stock market crash that precipitated the Great Depression.

The economic events of 100 years ago also share similarities with today. Following the First World War, the U.S. government was spending more than it was earning back in tax revenue, and high inflation ensued. American industrial power, though, created a flood of jobs as the country emerged as a major international player.

Historians such as Liaquat Ahamed (who won a Pulitzer for his depiction of Great Depression–era central bankers, Lords of Finance) argue that the imbalance of global trade caused by the use of the gold standard, on the one hand, and America actually having most of the world’s gold, confused central bankers’ response to the crash and worsened the recession into a depression; again, that’s not unlike today’s extraordinarily strong dollar as the world’s reserve currency. The Dow Jones Industrial Average index plummeted 89%, BofA calculates, putting even Bitcoin’s fall to shame.

In more recent years, we saw the stocks of U.S. homebuilders crash, declining 83% from a peak in 2005, based on BofA’s calculations. After the peak, an era of rapid growth came to an end over the course of three years and the financial crisis of 2008 followed.