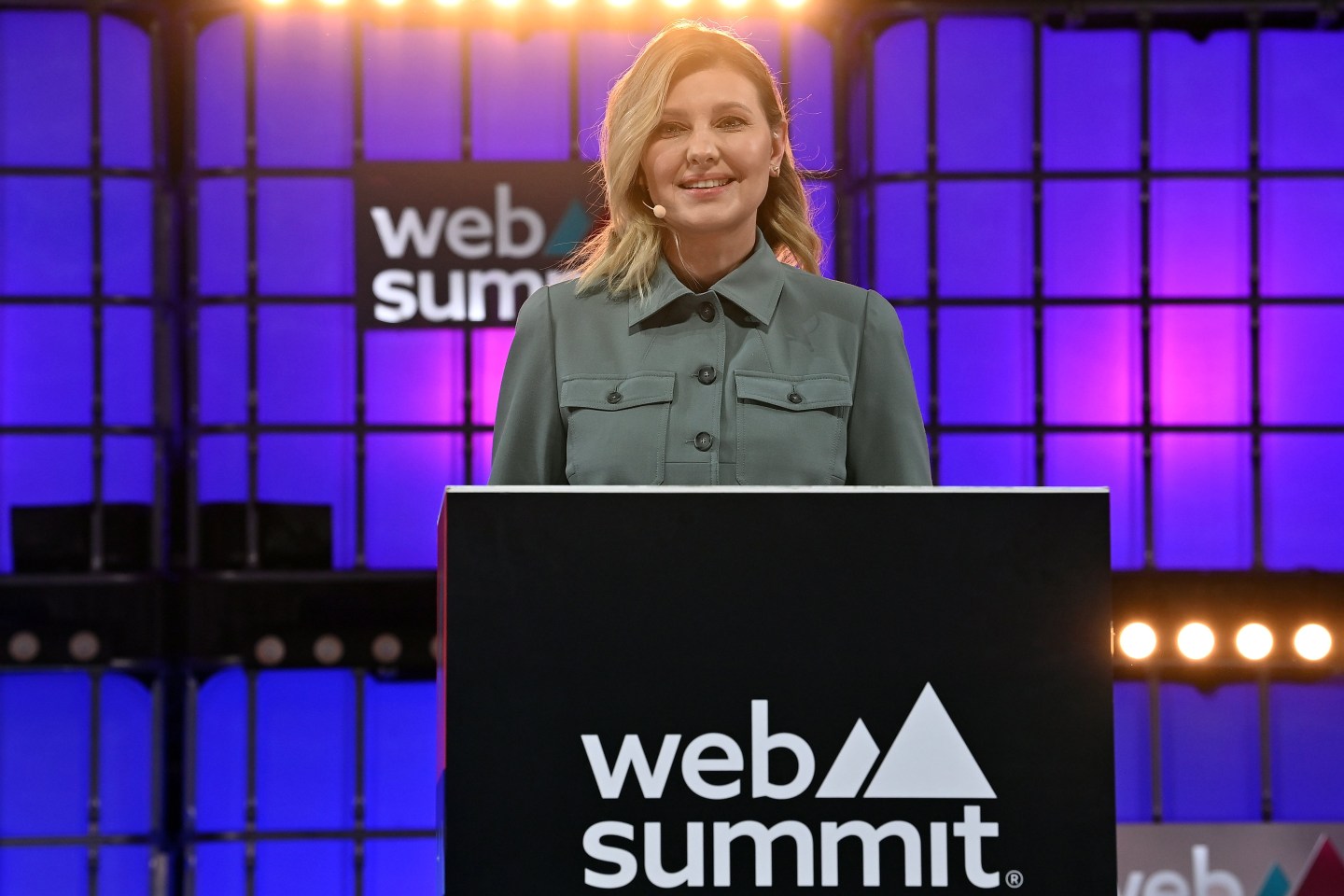 – Plea for action. Earlier this year, First Lady of Ukraine Olena Zelenska posted a photo on social media of a girl killed in the country’s war with Russia. But social media platforms hid the photo, tagging it as sensitive content.

“I think it’s wrong,” Zelenska told me at Web Summit in Lisbon, Portugal, yesterday. “Don’t hide from this.”

Social media platforms are responsible for showing the world what’s happening in Ukraine and bringing light to the on-the-ground reality for women and girls in the country, she said. “It’s the truth, and the world should know.”

Zelenska attended the summit, Europe’s largest tech conference, to speak to corporate leaders about how they can support Ukraine. The Ukrainian delegation met with Microsoft, she said, but hasn’t yet spoken with Meta (she didn’t specify which social media platforms hid her post).

Ukraine has been devastated since Russia’s February invasion, with a death toll of almost 6,000 and more than 8,000 people injured. Zelenska gave a keynote address on Tuesday night before meeting with a small group of journalists on Thursday, answering questions through a translator.

The first lady highlighted her Olena Zelenska Foundation, a nonprofit that works to secure medical supplies and humanitarian aid but whose larger mission is to “restore the human capital of Ukraine.”

She noted that small businesses in Ukraine are doing their part for the country, citing hairdressers who cut soldiers’ hair for free. But the global business community could do more to aid Ukrainian efforts. “This is exactly what we are here for,” she said of attending Web Summit.

Asked what conditions would be required for Ukraine to commit to a peace agreement with Russia, Zelenska joked that she’s “not wearing a khaki shirt” and she’s not her husband, President Volodymyr Zelensky. But she said the war’s toll will stick with the people of Ukraine for generations to come.

“It’s difficult to find a woman in the world who would watch what is happening in Ukraine without emotion,” she said. “Mothers especially, and wives, feel that they can understand.”

- Twitter warning. Under Elon Musk’s direction, Twitter began mass layoffs this morning that are expected to slash up to 3,700 employees. Already, prominent attorneys like Shannon Liss-Riordan and Lisa Bloom (who advised Harvey Weinstein) are warning that the layoffs violate the Worker Adjustment and Retraining Notification Act, which requires 60 days notice for mass layoffs at large companies. MarketWatch

- WFH's silver lining. About eight in 10 men and women equally believe the widespread adoption of remote work has created more opportunities for career advancement across gender lines, according to a new survey from Care.com and Mother Honestly. Fortune

- Retirement gap. Women retire with only about 74% of the assets men hold, a study from Willis Towers Watson finds. Surprisingly, this discrepancy widens among the most skilled roles (62%) and shortens for frontline workers (89%). Bloomberg

- Discrimination lawsuit. A former housekeeper for Jeff Bezos is suing the billionaire, alleging she was racially discriminated against by his staff and forced to work long hours without meals or rest breaks. An attorney for Bezos said the claims have no merit. GeekWire

- Danish elections. Denmark elected a record 44% of women to its parliament in this week’s general election. Prime Minister Mette Frederiksen is expected to serve another term. Bloomberg

- Where they stand. Republican candidates have walked back their hardline stances against abortion in recent months, as polling shows majority support for abortion. Kansas’s election results suggest voters aren’t interested in making such care illegal. The Cut

We call ourselves sister judges Elle

Why on Earth is Johnny Depp in the Fenty show? The Cut

“We battled a lot of resistance from men in this industry. I never let it get to me or discourage me. It fueled me.”

-Cheryl James, better known by her stage name “Salt” from the rap group Salt-n-Pepa, reflects on her career ahead of the group receiving a star on the Hollywood Walk of Fame.