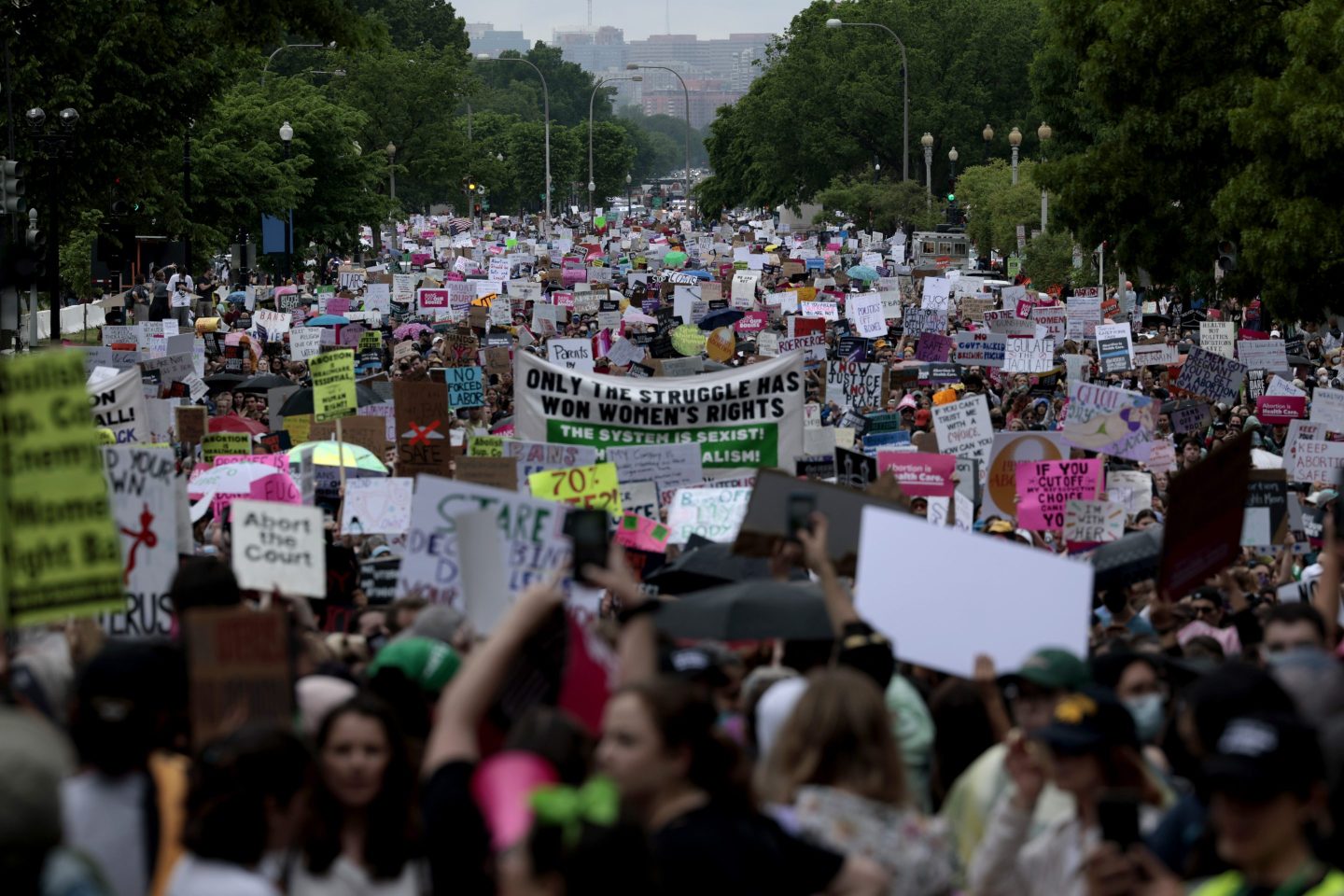 Protestors march in Washington DC. on May 14 after a draft of the decision by the U.S. Supreme Court to reverse Roe v. Wade was published by the media.
Anna Moneymaker—Getty Images

Every election cycle, we hear talk of rolling back rights for women, minorities, and other disadvantaged people.

Unfortunately, the constant push to curtail how women live has been successful. In this election cycle, the stakes are high. Since the Supreme Court overturned Roe v. Wade, the power to regulate abortions has been given to State Legislative Bodies, comprised of mostly men. On Nov. 8, voters will cast their ballot to, once again, determine the future of reproductive rights.

Without a unified front, control of our bodies and health is at stake. In no morally just world does it make sense for our rights to be up for grabs by politicians–regardless of sex or political affiliation.

That’s why those who identify as women need to unite and uphold each other. This is not a time to be divided by political parties or ideologies, often steered by some of the media and politicians for sensationalism and clicks–it’s a time to rally around the humanity of the issue.

Recent polls tell us that abortion access is a top issue in motivating people to vote. Through our collective power, we can reclaim a freedom that our predecessors championed in the streets only decades ago.

Generations of women have fought for every scrap of freedom we possess today. The indignity and brutality of the past should not slip away because we, as a culture, have become so attuned to sitting aside and watching politics unfold like a reality TV show.

As a Black and Chinese woman living with a disability, I’ve fought my entire life to protect my rights and earn what I have. In my current role, I continue that fight for everyone impacted by system inequity.

Every obstacle I face fuels my resolve. After I was diagnosed with Dystonia, a rare movement disorder, it became difficult to use my dominant right hand. I taught myself to write with my left. I made my way through business school with this determination. When I realized the lack of accessibility and diversity on Wall Street, I decided to go where I could make a meaningful, immediate impact on disadvantaged people’s lives.

I may be discouraged from time to time, but my desire for change is not easily swayed. That’s the resolve I’m carrying into this fight. I don’t always feel strong, but I choose to remain strong. It can be exhausting–especially when a desk of nine people can make a decision that takes away decades of progress in a single day–but I continue to fight. I don’t accept that people with ovaries are second-class citizens.

I’ve spoken with many people who feel discouraged, disheartened, and overwhelmed to the point of being stuck. So many things we fight, both personally and collectively, can feel invisible and difficult to measure progress on. But abortion access is different: it’s a tangible, public battle that we can change with one vote, and another, and another. That fires me up!

Reproductive rights are a human issue, not a political one

When I see Florida, my home state, push for a 15-week abortion ban, I see politicians disregarding lives for the sake of votes. When issues become so polarized, we lose the human factor.

It’s time to stop thinking about abortion as a political issue and start talking about it as a human issue. Not only does this mindset bring more clarity to reproductive autonomy, but it centers the issue in a way that more voters, especially younger ones, can relate to.

I learned this from Sophie Berren, CEO of the Conversationalist, a non-partisan educational platform that “empowers young people to have conversations that matter.”

In a recent ABC News interview, Sophie was asked to weigh in on the fact that more than half (52%) of Gen Z voters don’t identify with a particular party. She reasoned that it was because they reject traditional labels and want to be seen as holistic human beings. As she put it: “I wouldn’t be shocked if in the upcoming midterms, young people were voting outside of party lines.”

That’s the essence of what a human issue is: reaching beyond party lines to do what’s right, ignoring slogans and rallies. To look at the people impacted by votes as humans, and to act accordingly.

To shift reproductive autonomy back into a humanity issue, the situation of those seeking care must be normalized. Difficult conversations need to be had. We do this by telling our stories–however raw and emotionally vulnerable it makes us.

It’s worked before. By encouraging women to come forward and speak up, #MeToo validated women’s experiences, and over time, helped usher in increased awareness and understanding. New data from the Pew Research Center found that most Americans (62%) think that people who report sexual harassment or assault at work are more likely to be believed today compared to before the movement started.

There’s already momentum building for the abortion discussion. Chrissy Teigen shared that she had an abortion in 2020 to save her life “for a baby that had absolutely no chance.” The Palm Beach Post published a story of six women sharing why they got an abortion. Big names aren’t needed. Your mother, sister, or friend might have a story. Listen, and empower her to share it wherever possible. You don’t become comfortable by keeping scary things far away. Embracing and understanding them is the only way forward.

Some organizations are using their platforms to give voice to this issue. Ms. is collecting stories from women who have had abortions or who can’t access abortions, with an acknowledgment that “For too long, these stories have gone untold or been forgotten…” The “Roe Project” from GQ, surfaces the male perspective in an effort to mobilize more men to fight for abortion access.

Normalizing the conversation is important. Politicians are not the owners of the narrative. And when someone opens up about their journey, we have an important job: to listen without judgment.

We are worthy of making our own decisions

I’ve been judged my entire life based on my sex, race, and disability. Many have tried to make me feel that I am simply not enough. That’s the fire I tap into to make sure women and people born with ovaries can make decisions about their own bodies. I accept that I can’t control how others perceive me, but neither will their opinions sway me into thinking differently about myself.

We need to rally as women, as sisters, as mothers, and most importantly, as humans, to stand up for what is right; to regain the reins and not fall backwards again. If we don’t fight for reproductive autonomy now, what falls next? The midterms are a chance to right the course of history.

Let’s show up and go to the polls to make a change. Every vote matters, and as a human collective, we can enable change.

Carrie SiuButt is the CEO of SimpleHealth, a company “devoted to supporting women and people born with ovaries and providing expert care no matter the political atmosphere in the U.S.” The company makes access to reproductive wellness safe, convenient, and easy for its patients and is committed to securing personal and private data. Carrie also sits on the board of Covenant House South Florida, a non-profit agency that serves runaway, homeless, and at-risk youth, including teen parents and their babies.